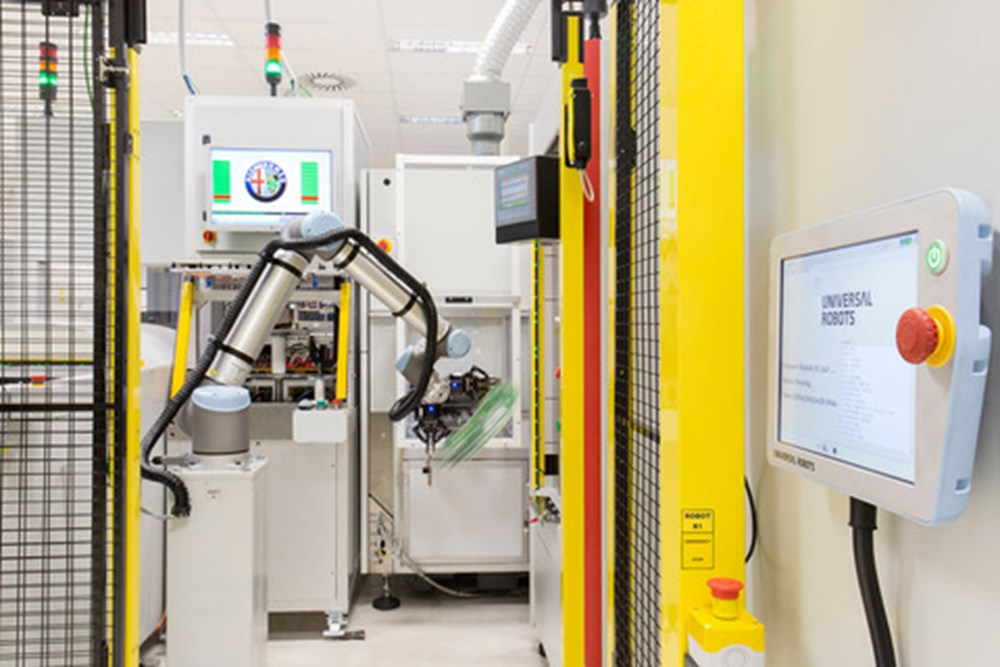 Humans and robots together produce better results than robots or humans working alone. This is also supported by an MIT study conducted in 2014 which examined the impact of human-robot collaboration and revealed an 85% reduction in worker’s idle time when they worked alongside collaborative robots.

Today, automation has entered almost every aspect of auto production, from parts and sub-assembly production at Tier 1 & 2 suppliers to the final product rolling off the line at OEM production facilities. Let us look at some automotive production challenges that UR cobots overcome.

Although the automotive manufacturing has embraced robots since decades, but there are tasks mainly on the assembly side, that are highly dependent on manual labor. As most auto production happens in urban settings, there is no extra space to expand or accommodate large robots. Therefore, one of the benefits of cobots is their flexibility. They can be mounted anywhere and can be deployed next to humans after a risk assessment. For urban car makers, cobots also have a small footprint, which means they can easily be dropped into existing production lines, mounted on a pedestal or fitted onto a mobile platform. They successfully perform a wide variety of applications.

For example: Bajaj Auto, one of the world’s largest motorcycle manufacturers, deployed the first collaborative robots in India in 2010, and now has over 100 cobots on their production line in Chakan. The company’s production grounds were labor-intensive, space-challenged, and physically taxing for their staff, half of which are women. Bajaj mitigated the ergonomic risks by adopting cobots, which simplified tasks and promoted consistency. Over 100 cobots performed a variety of tasks such as material handling, machine tending, patented decal application, vision application, bolt tightening and welding. As a result, production was standardised and improved due to the compactness, flexibility, and ease of use of UR’s collaborative robots. The cobots helped in producing high quality bikes, while upskilling and empowering its workforce to work with this new technology. 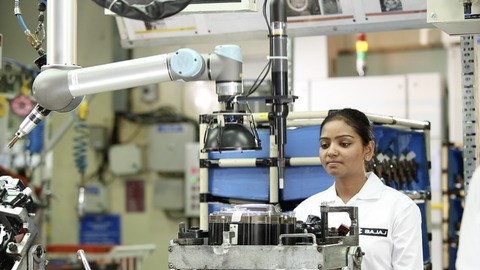 Vikas Sawhney, General Manager Engineering (Robotics and Automation) Bajaj Auto said, “After an intensive study of the options that were available in the market, Bajaj Auto chose Universal Robots primarily due to the collaborative nature of the robots. The key benefits of Universal Robots’ products such as their compactness, low pay back period, flexibility, light weight, cost-effectiveness, accuracy and their safety, is what ultimately convinced Bajaj Auto about the suitability of Universal Robots for its standardized offerings.”

Continental, one of the world’s largest tire manufacturers in India, integrated their machines handled by operators at their manufacturing plants with cobots. The collaborative nature of cobots ensured that Continental did not have to bear any extra expenses such as protective fencing or safety curtains, which are essential for traditional robots. The cobot enabled elimination of human errors, cut ergonomic risks, made the process faster, ensuring high stands of quality that the brand strives for. 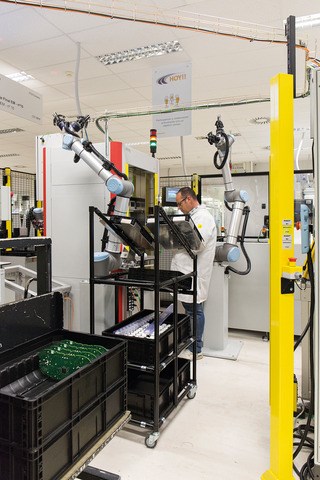 New UR products launched and in the offering for automakers

UR is attentive to its end-users and is continuously enhancing its product offerings. For example, the new cable suite for our e-Series platform was developed after requests from automakers to have more flexibility in integrating our e-series robots into their manufacturing lines. UR’s latest cable suite offering now comes with a base flange connector, which is a plug at the base of the robot designed to enable even more flexible cobot deployment and servicing.

Universal Robots gifted its limited edition Golden Robot to New Engineering Works when it achieved the sale of 25,000 cobots, globally. The SME, which had already installed 6 cobots for CNC machine tending, decided to deploy this Golden Cobot to spray anti-rust oil on their auto components. With this new addition, the manufacturer completed the task consistently in less time and with 25% less wastage through its hassle-free human robot collaboration in the smallest spaces.

The Universal Robots UR16e delivers an impressive 16kg (35.3 lbs.) of payload within a small footprint, and is ideal for use in heavy machine tending, material handling, packaging, and screw and nut driving applications. This powerhouse robot allows for heavier end of arm tooling and multi-part handling, and is especially useful for achieving shorter cycle times.

In a nutshell, UR’s cobots are ideal for small and large business enterprises which are looking to improve their quality and consistency in production. By accelerating speed and ensuring safety of the employees, the cobots are a boon to the companies using them.  With low maintenance and greater ROI in a short of period of time, cobots are the future of innovation in India.

For more on the robotics manufacturer Universal Robots