Commitment to produce motorcycles of best in class quality while improving productivity and ergonomics is what drove Bajaj auto ltd. To choose universal robots’ cobots for their assembly lines. Being the first company in India to implement collaborative robots has enabled Bajaj to improve its production capabilities and evolve its multi-modelling offerings.

“In 2010, we were looking for solutions to automate our assembly lines,” said Vikas Sawhney, General Manager Engineering (Robotics and Automation) Bajaj Auto in response to the automation advancements in the manufacturing industry over the last few decades. “Two-wheeler assembly lines are highly labor-intensive, spatially challenged and they have physically taxing movements that require high-end precision. While trying to automate these lines, one of the basic requirements was for standardization. Moreover, we also wanted to be cognizant of the requirements of the large women workforce at Bajaj.”

While standardization of models was a key tenet of Bajaj’s success in the market, it was rapidly expanding its production capabilities due to the growing scale of multiple models and the wide-ranging number of vehicles supplied in the market. The key then was to find a standardized automation solution that could be horizontally deployed and that could provide the productivity, flexibility and reliability that Bajaj’s workers could capitalize upon.

“After an intensive study of the options that were available in the market, Bajaj Auto chose Universal Robots primarily due to the collaborative nature of the robots. The key benefits of Universal Robots’ products such as their compactness, low pay back period, flexibility, light weight, cost-effectiveness, accuracy and their safety, is what ultimately convinced Bajaj Auto about the suitability of Universal Robots for its standardized offerings,” Vikas added.

After 3 months of extensive testing of Universal Robots’ cobots at its facilities, Bajaj deployed our cobots as a standardized solution for all its functional requirements. Several processes such as material handling and machine tending were collaboratively handled by our cobots and Bajaj employees. Moreover, new decal applications which are now patented by Bajaj, were also devised by the company to make the most out of the flexibility provided by the cobots.

Other benefits such as zero annual maintenance costs, reduced power consumption and retention of IP within the company are also organically driving forward the growth of the organization. Additionally, almost 50% of Bajaj’s workforce is comprised of women on this assembly line.

“Thanks to the high-quality output I achieve with the cobots, I feel very proud of my accomplishments,” says Rameshwari, Assembly line operator at Bajaj Auto Ltd. “Operating this advanced technology is very interesting and easy, and all the physically challenging parts are taken care of by it. Me and the other women employees enjoy working with these co-bots .”

Bajaj Auto Ltd. employees now have the advanced tools to carry out repetitive tasks with faultless precision, and this is one of the key factors driving the company’s phenomenal growth globally. Not only does Bajaj deliver high-quality vehicles to its customers, it does so with a collaborative technology that leaves its employees beaming with smiles at the end of their day. 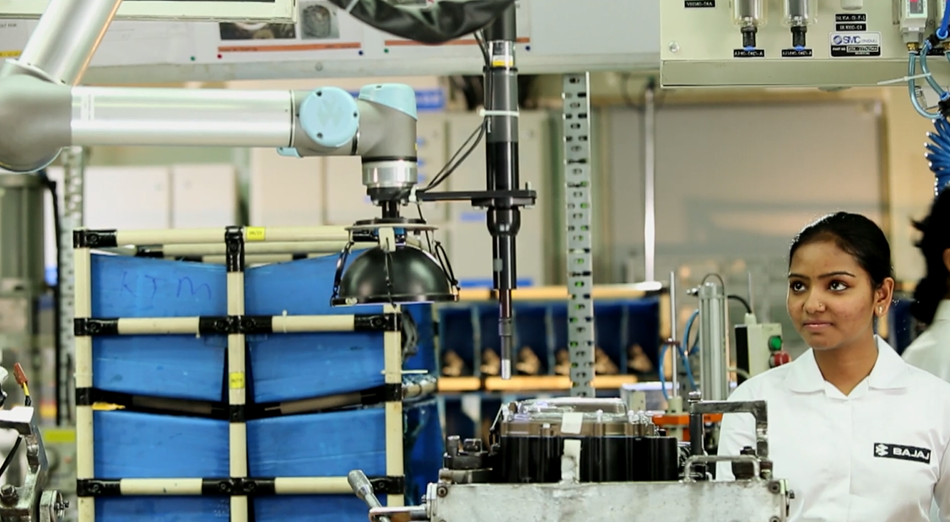 “Operating this advanced technology is very interesting and easy. Me and the other employees enjoy working with these cobots”
RAMESHWARI UFFELS Assembly line operator

Fill out the form and get a call from one of our automation experts!