Note that this will occur even if the installation was not saved in SW 5.13.0, since older installation files (i.e. the .variables file) automatically will be updated to the new format when loaded for the first time (on SW 5.13.0).

It is therefore recommended to back up existing programs and installations before upgrading to SW 5.13.0.

This release is focused on improving the user experience for operators using the Run tab screen. Focus areas are integration of large program play controls and improving how the list of variables of running programs are presented.

The Run tab screen has been extended with integrated program play controls, i.e. Play/Pause/Resume and Stop buttons. The buttons are large to make them easy to press for operators, even when wearing gloves. 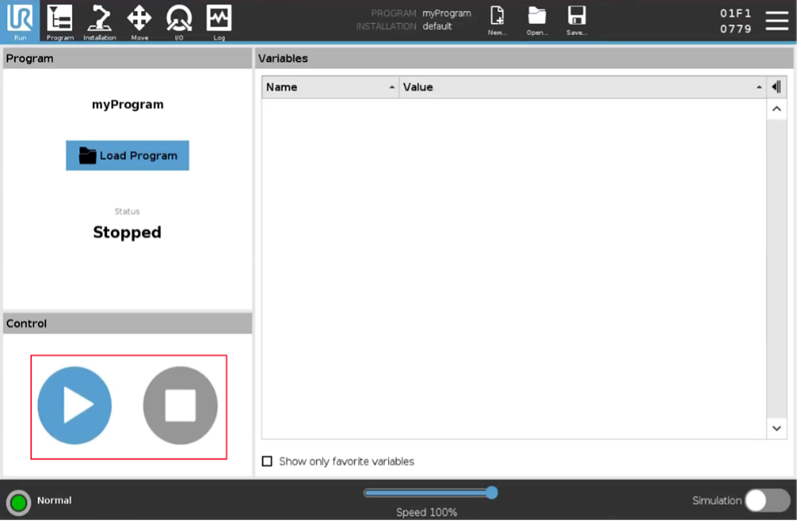 The new Control panel with program play controls replaces the Robot Age panel from previous PolyScope versions. Robot age is still saved to the log file and can be read using the UR Log Viewer.

Note that the program play control buttons in the PolyScope footer are no longer visible while on the Run tab screen (the footer play controls are, however, still available from other screens).

By default, a list of all program variables and installation variables used by a running program are displayed on the Run tab screen and on the Variables tab (in the Program tab screen). Now, it is also possible to show a list of selected variables by using the new option to only show favorites variables on these screens. 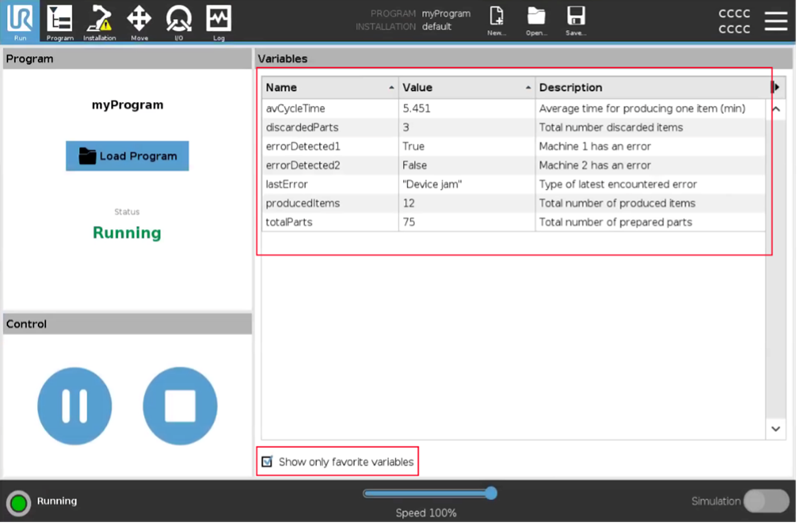 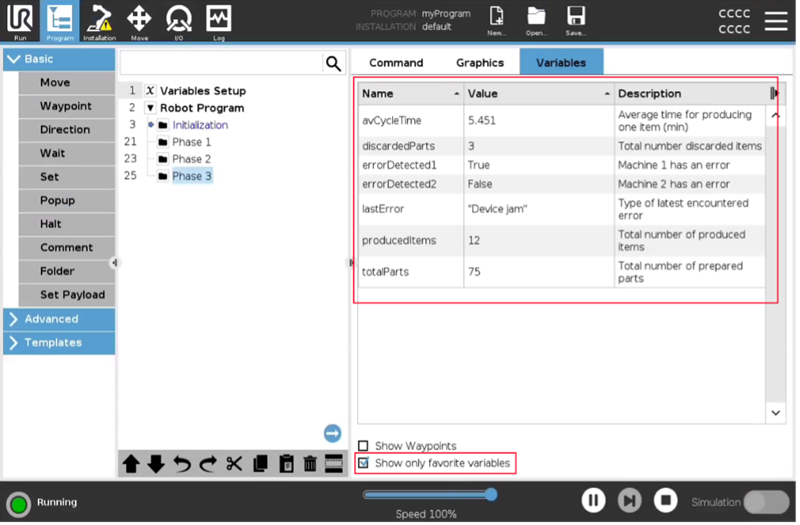 This new filtering option allows operators using the Run tab screen to only focus on monitoring a small list of important variables relevant for operating the robot application.

It is possible to designate both program variables and installation variables as favorites.

The new Variables Setup node can be used for designating favorite program variables. 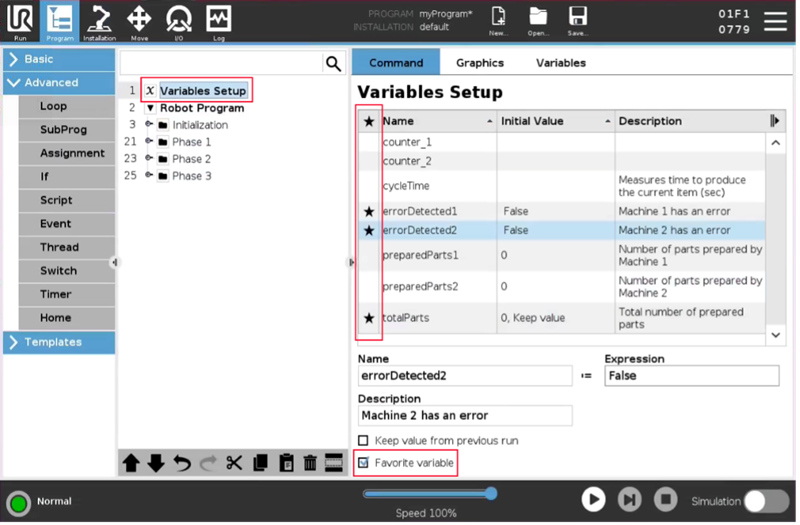 An installation variable can be designated as a favorite variable on the Installation Variables screen. 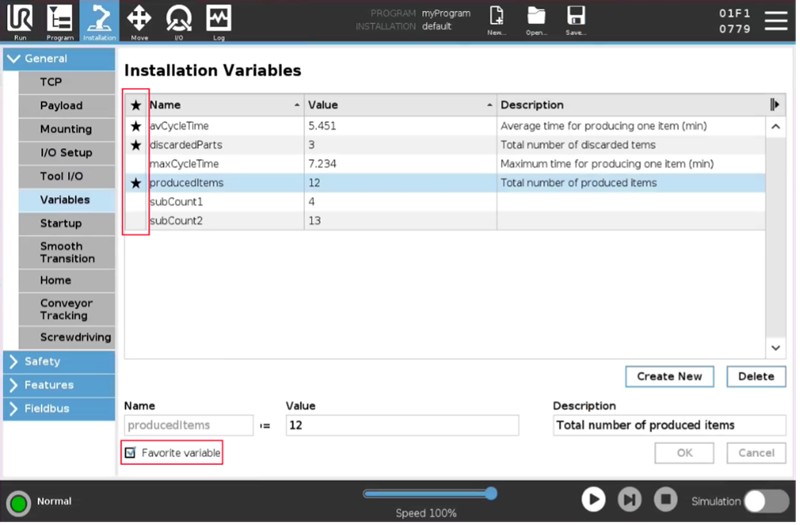 The leftmost column in the variables list on the Installation Variables and the Variables Setup node screen indicates whether a variable is a favorite, and it is possible to order the list accordingly by tapping the header of the column.

This release provides the possibility to add an optional description to program variables and installation variables with a length of up to 120 characters. The description can be used to convey the purpose of the variable and/or the meaning of its value to operators using the Run tab screen and/or other programmers.

The description of a variable (if a description has been specified in the program or installation) is displayed in the Description column in the variables list on the Run tab screen and the Variables tab. 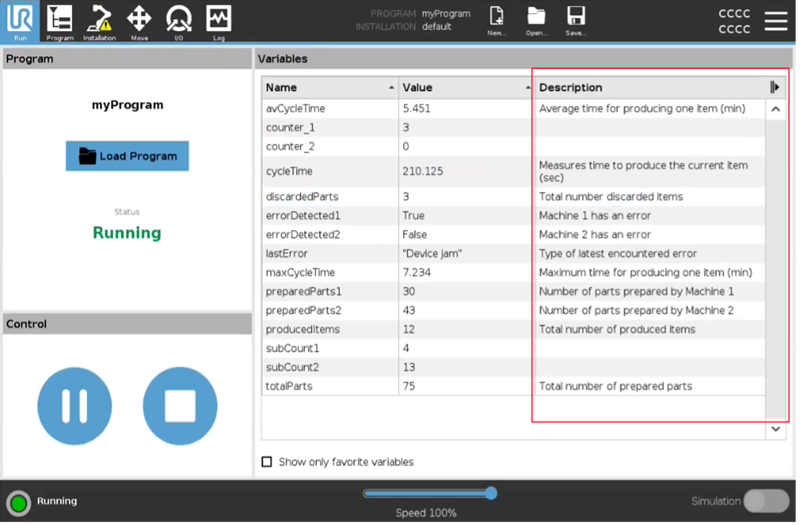 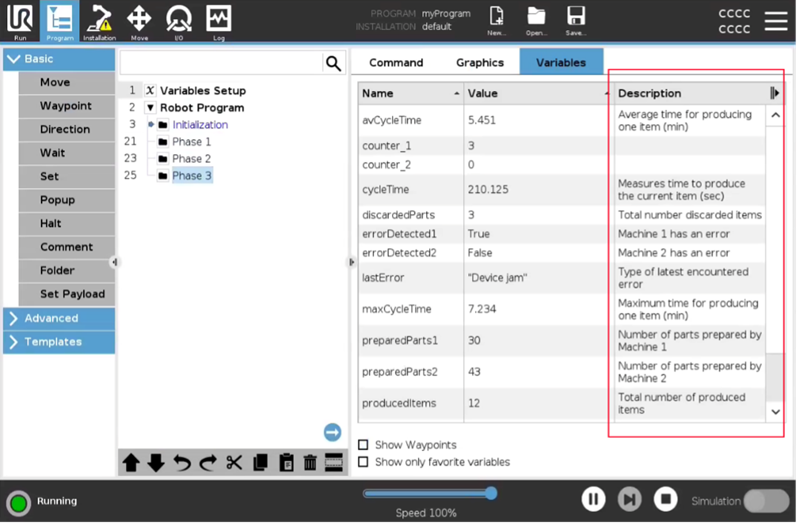 A variable description will span multiple lines to fit the width of the Description column if necessary.

The new Variables Setup node can be used for adding a description to program variables. 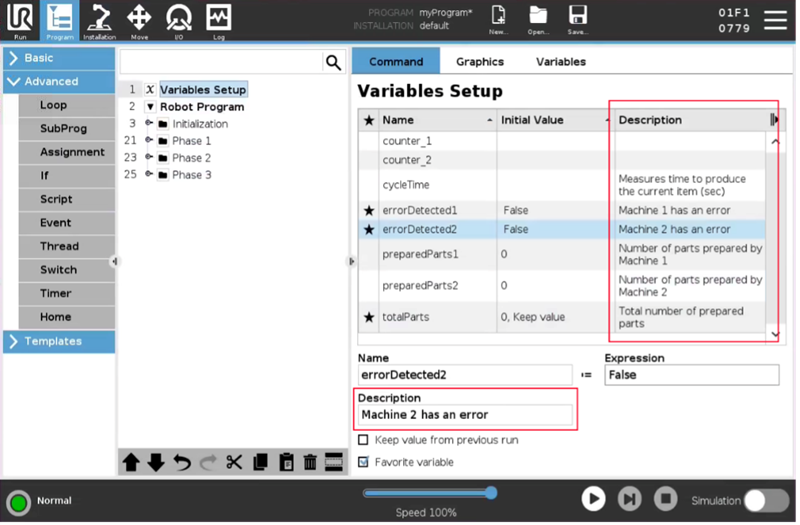 The Installation Variables screen has been extended with the ability to specify descriptions for installation variables. 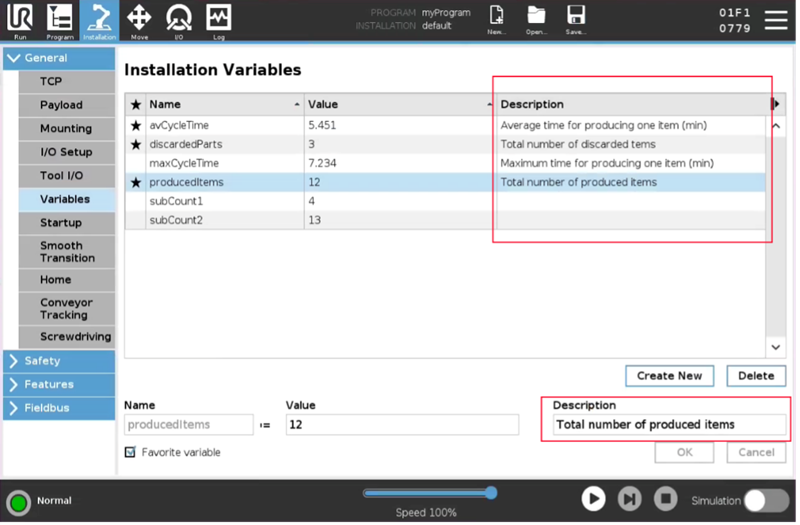 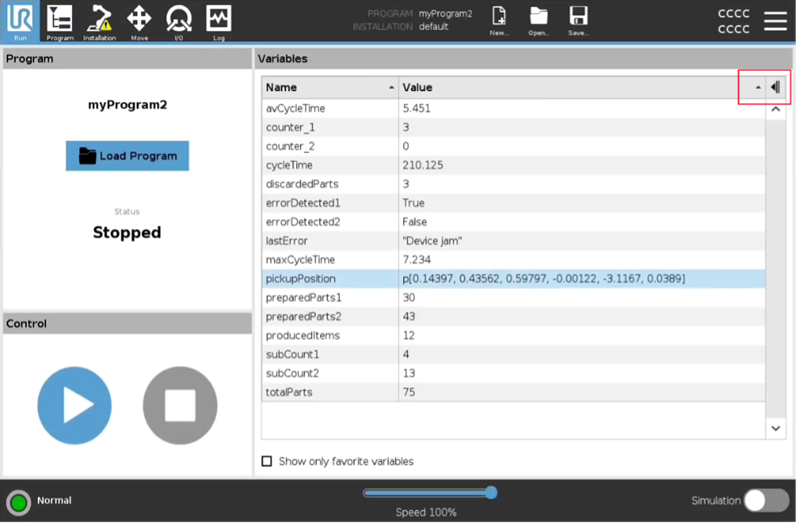 Variable descriptions can be hidden on all screens with a variables list, i.e. the following screens: 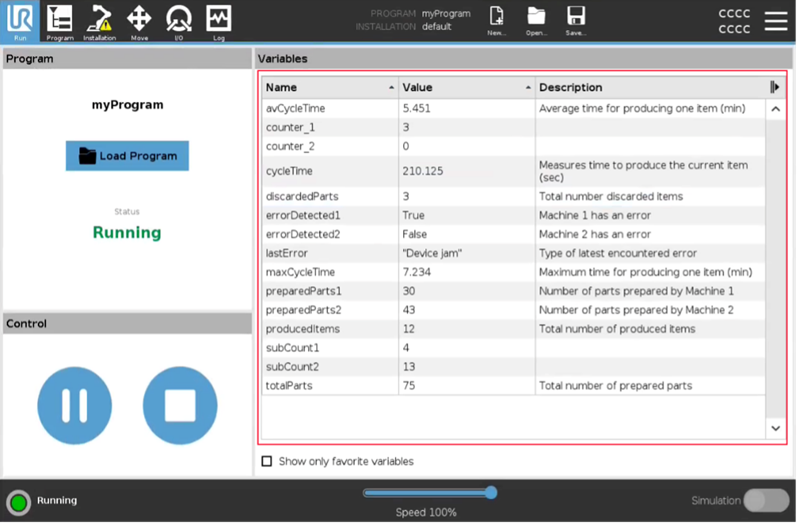 The Show Waypoints option has been removed from the Run tab screen to simplify the screen for operators, since this option is typically only used by programmers. Note that this option is still available on the Variables tab. 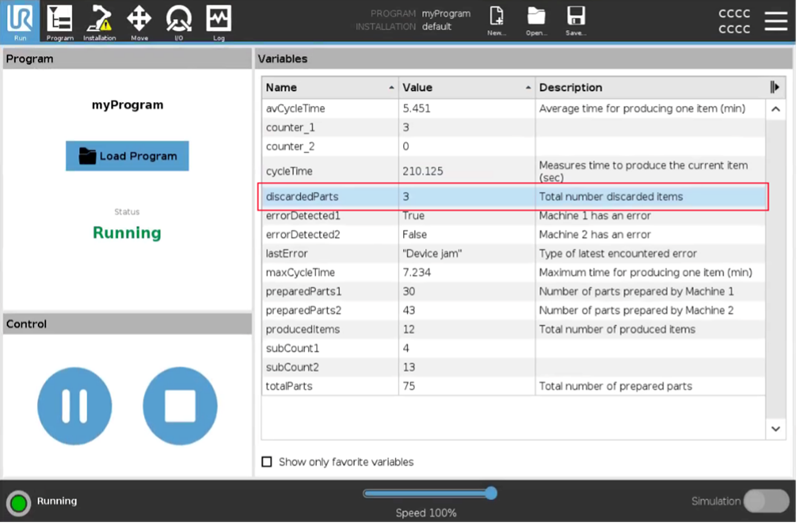 The selection will remain (also after changing screens and while the program is running) until another row is tapped or the selection is cleared by tapping the selected row again.

This release comes with UI improvements on screens for creating/editing installation variables and editing properties of program variables.

The Init Variables node has been replaced by the new Variables Setup node.

In addition to the existing functionality of the old Init Variables node, the new Variables Setup node offers the option of configuring new program variable properties. With the new node, it is possible to:

The new node has an improved layout and workflow for editing the properties of program variables, and it is permanently visible as the first node in the Program Tree. 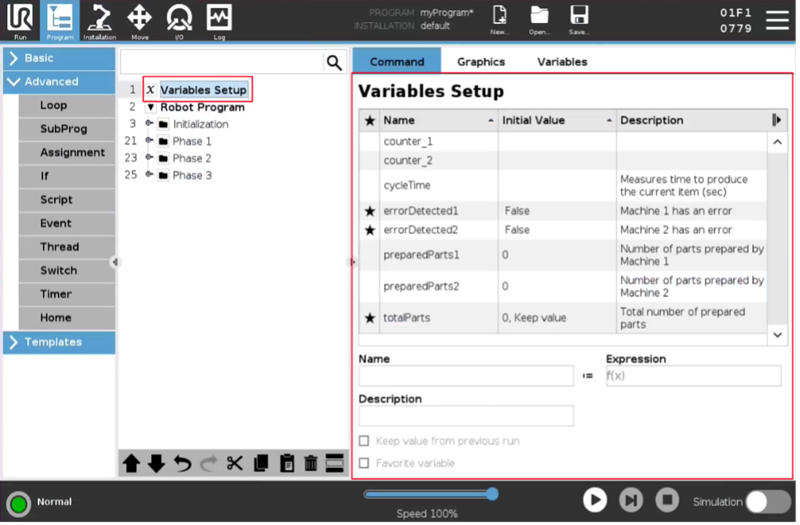 When the Keep value from previous run option is enabled and an initial value is defined, both options are indicated in the Initial Value column in the variables list. 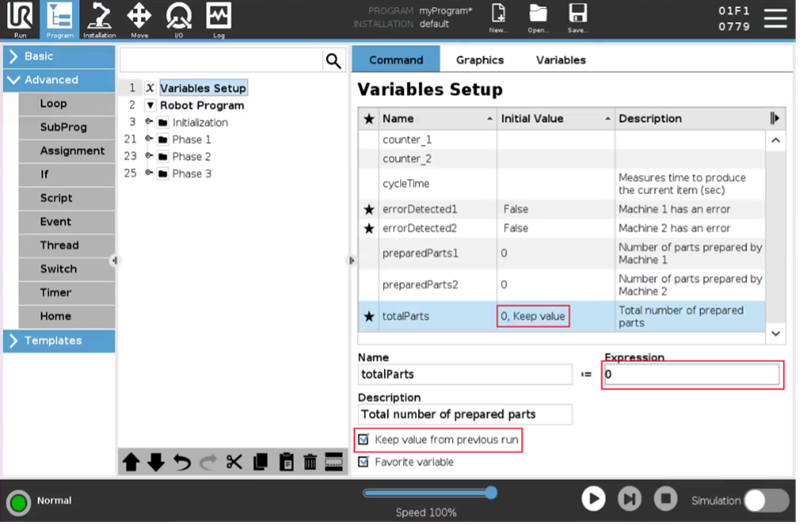 The layout of the Installation Variables screen has been improved. The screen also introduces a new workflow where the properties of an installation variable can be modified by editing input fields. 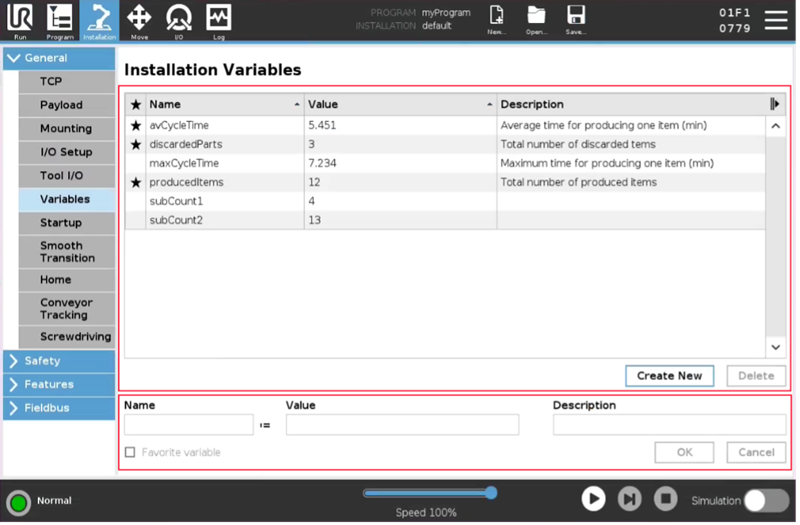 When creating a new installation variable, an empty Value field is now highlighted with a yellow background to indicate that it is mandatory to specify an initial value for the new variable. 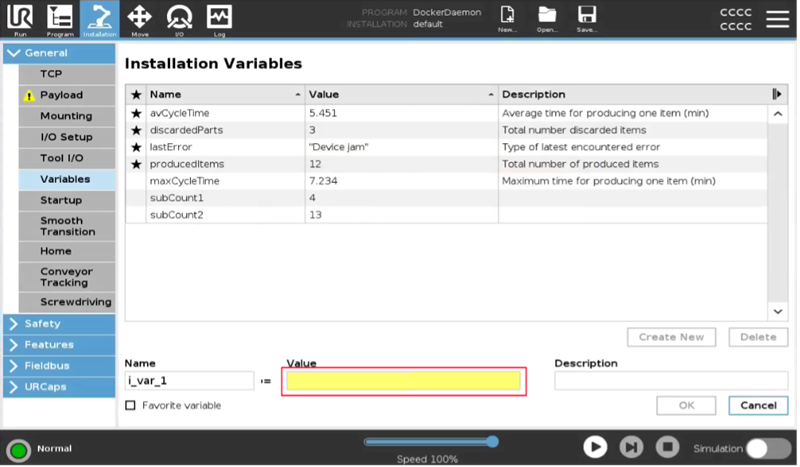 The built-in PolyScope help (accessible through the Hamburger menu) has been replaced with a new Help screen with a single QR code pointing to https://help.universal-robots.com, in order to improve compatibility across PolyScope versions and ensure up-to-date help content. The online-based user manuals can be accessed for online browsing by scanning the QR code. 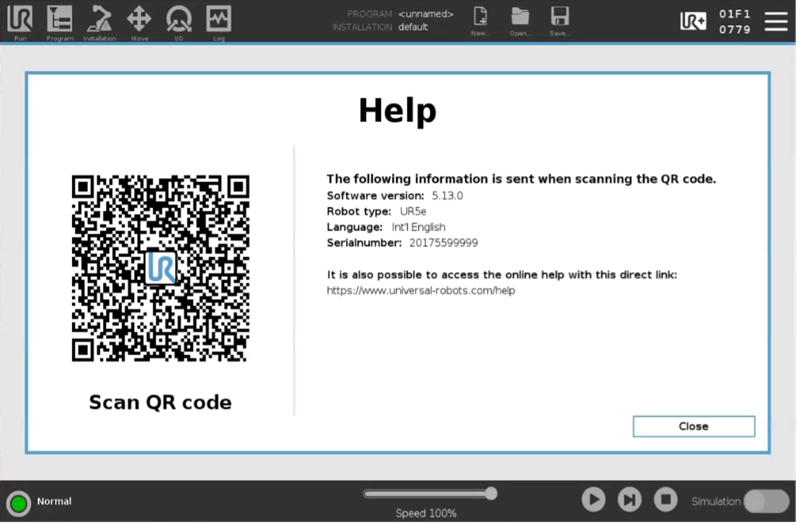 The new Help screen replaces the previous local context-based PolyScope help on the robot (the clickable red question marks) which is no longer available.

Note that by scanning the QR code, system-specific information, like software version, robot type, language, and serial number are sent along, to provide a customized experience (the specific transferred information is stated on the Help screen). If this is not wanted, the direct link can be used instead.

It is now possible to read the software End User License Agreement (EULA) in PolyScope. The EULA can be reviewed under the Legal section in the About screen. 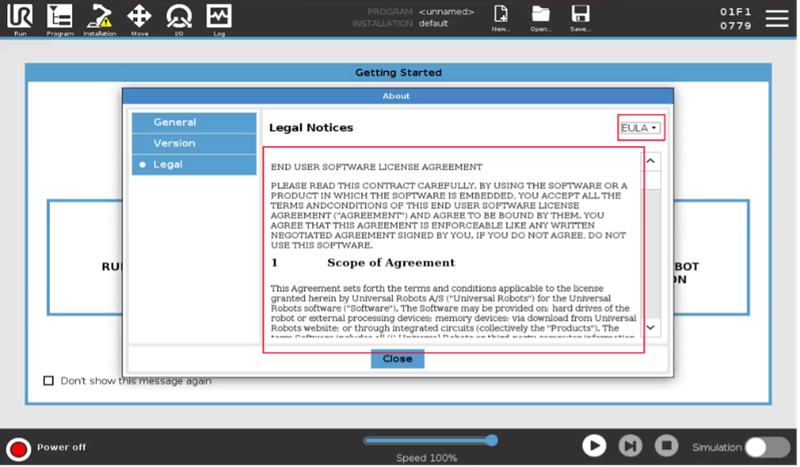 Note that in this release, the software EULA is only available in English.

The Version tab has been renamed to General.

The build date is displayed in a new separate Build Date field instead of being part of the software version shown in the "Universal Robots Software" field. 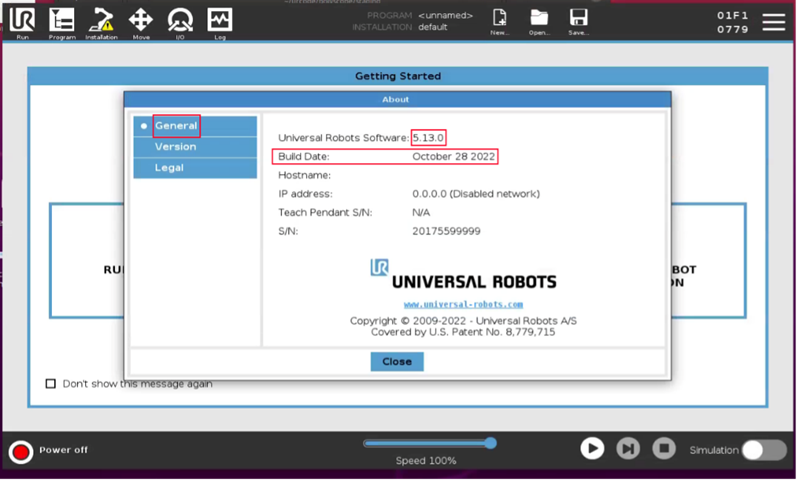 The Dashboard Server remote control interface has been extended with the new version command which returns the version of the UR Software running on the robot. The new command returns a string with the version number, e.g. "5.13.0".

The version command can be used as a replacement for the existing polyscopeVersion command whose return value is a string with the complete version information from the About screen from previous PolyScope versions, e.g. "URSoftware 5.12.0.1101319 (Mar 22 2022)".

This release is accompanied by the introduction of the online-based user manuals available at https://help.universal-robots.com. 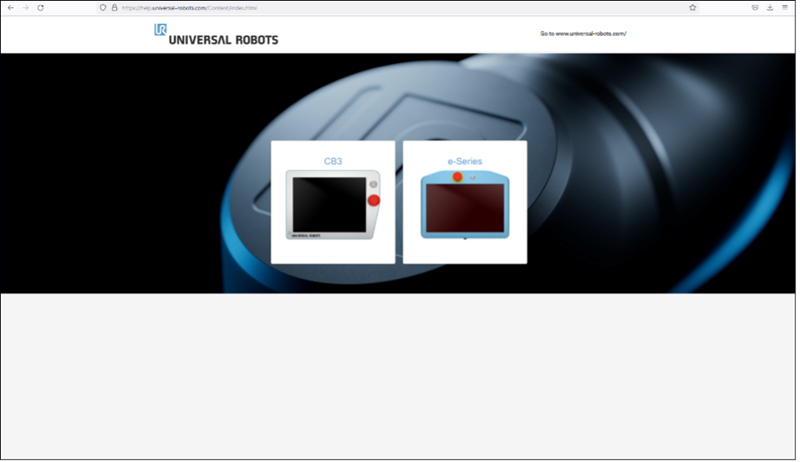 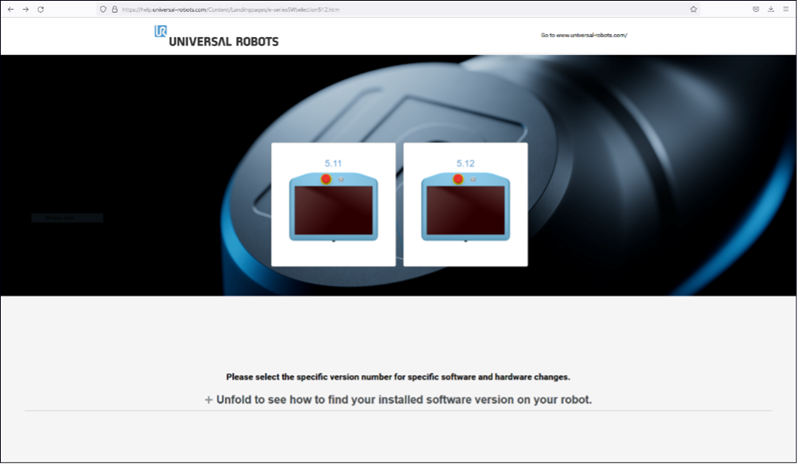 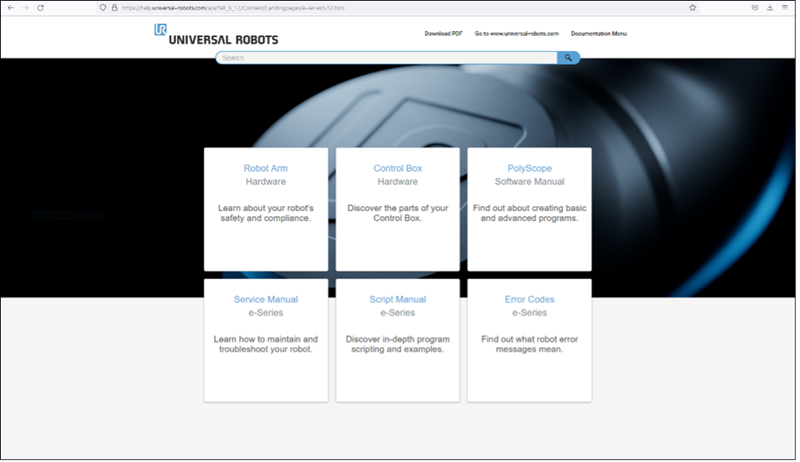 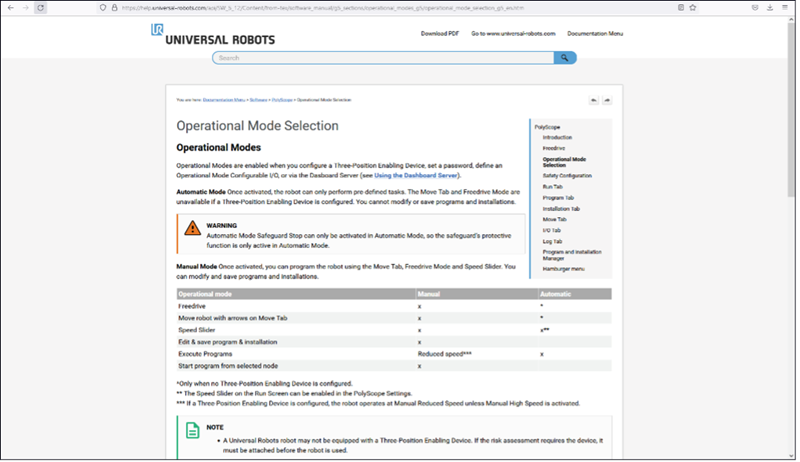