Read URScript commands from a file

It is possible to execute multiple UR script commands inside a file through the interpreter socket . This example python script demonstrates how to read and execute the commands defined in a separate file. 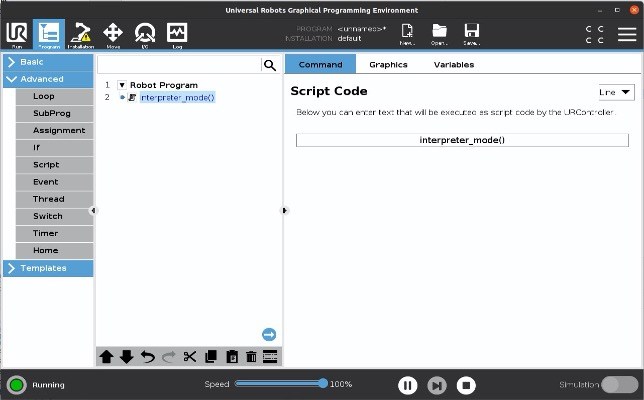 After each 500 commands sent script waits until they are fully executed, and clears interpreter buffer

Interpreter mode is also capable of

These features make it possible to delete and redefine the actions to be taken in future. The following python script demonstrates how robot could skip from a "waving trajectory" to execute a new set of actions in an entirely different trajectory.

This sample aims to demonstrate how to control I/O, fieldbus, Tool-com, etc. synchronous and asynchronous with robot movements.

Each command is interpreted and executed.

You can create multiple interpreter mode calls in the main program. Program on robot should have following structure: 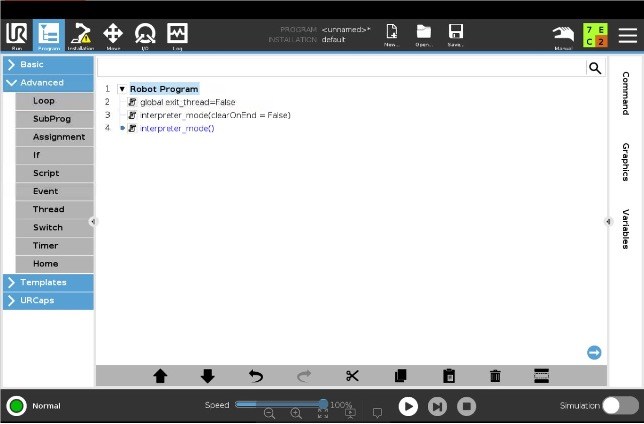 In this example, the robot program creates a global variable and calls two interpreter modes sequentially. After entering interpreter mode controller will await commands from interpreter socket in a blocking fashion. Then just run the following python script:

InterpreterHelper class contains a number of methods which allow to connect to the robot and send interpreter commands.
It also contains methods for sending status commands.
Each command returns numerical response (interpreted command id, or status command response) or raises exception on error. Class is imported, and used in all examples.