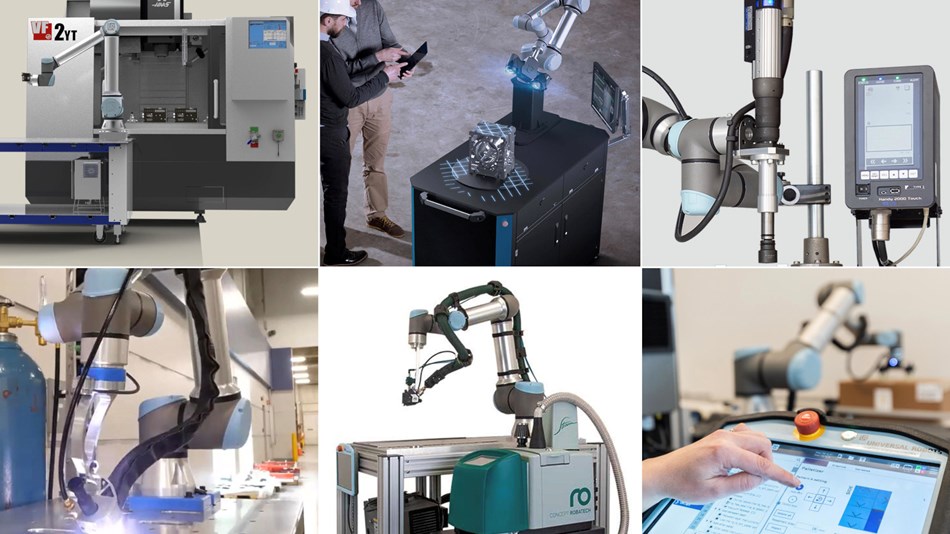 Exhibiting at North America’s largest show for automation technologies, Universal Robots is ready with a cobot cure for a broad new range of complex applications. These provide new opportunities for manufacturers who are plagued by the inability to ramp up production that requires complex TIG or laser welding processes as well as hard-to-staff tasks such as machine tending, dispensing, labeling and screwdriving. “Our application diversity at this year’s Automate speaks volumes,” says Joe Campbell, senior manager of applications development and strategic marketing at Universal Robots (UR). “Attendees visiting us and our partners at the show will have no issue finding a UR cobot automating the task they’re looking for.”

Adding new meaning to the term ‘Universal', the characteristic light-blue jointed collaborative robot arms from UR will be spotted hard at work in more than 30 booths throughout Automate 2022, taking place in Detroit, MI, June 6-9.

Coming out of a record revenue quarter, UR is experiencing broad-based growth from many different segments such as welding, an application area that grew an astounding 300% in 2021 compared to 2020 levels. “Welding is the latest example of an automation frontier now conquered by cobots,” says Campbell. “As we first entered the market, few believed cobots could handle heavy-duty tasks such as welding. Fast forward to this year’s Automate and we have numerous welding applications showcased, reflecting the robust market traction we’re now seeing - not only handling MIG welding but also within more complex processes such as TIG and laser welding.”

At Universal Robots Automate booth #1432, Cobot Systems, a UR Certified Systems Integrator (CSI), is launching the first commercially available IPG LightWELD laser welder to be guided and controlled by a cobot. “Laser welding enables dramatically faster welding, is easier to learn and operate, and provides higher-quality and consistent results across a wider range of materials and thicknesses with minimal distortion, deformation, undercut or burn-through,” says founder of Cobot Systems, Brian Knopp.

Melton Machine & Control Company is showing the new and enhanced CoboWeldTIG, the only cobot-powered cold wire feed TIG welder on the market.

Another new weld solution comes from UR CSI Melton Machine & Control Company, showcasing an enhanced version of the market’s first cobot-powered cold wire feed TIG welder, that enables the cobot to add both fusion and filler material to thinner material as it travels. “We’re seeing a really phenomenal reception from industries where the weld quality needs to show off the quality of the overall products,” says Glenn Archer, VP of sales and marketing, Melton Machine & Control Company, mentioning products such as exhaust systems on motorcycles or kitchen sinks. “Welds that you look at every day need a perfect visual appearance. Deploying a UR cobot in this process helps our customers achieve just that.” 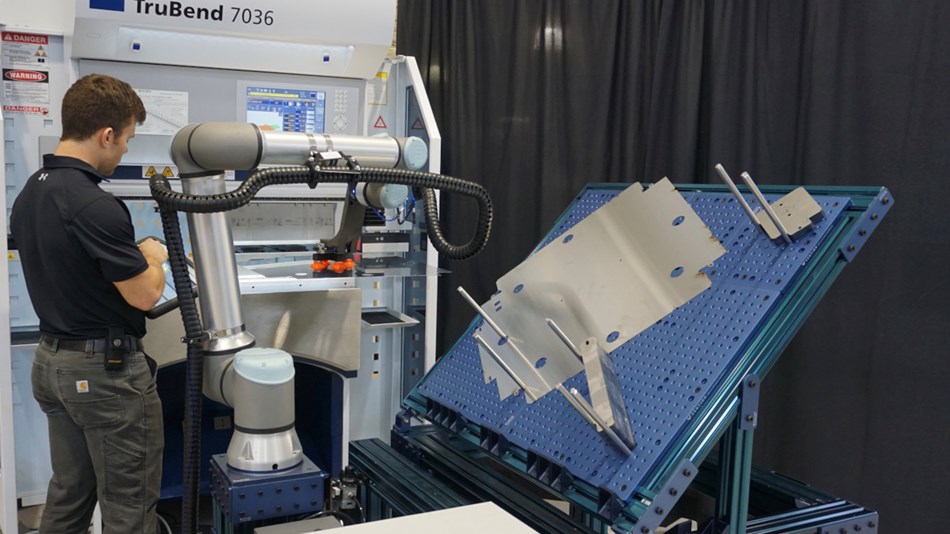 For the first time at a North American show, UR will feature a press brake tending application at its booth. The Press Brake Operator Package from Mid-Atlantic Machinery showcases a UR10e on a modular parts cart with a machine tool interface and a zone safety scanner that ensures shop safety. 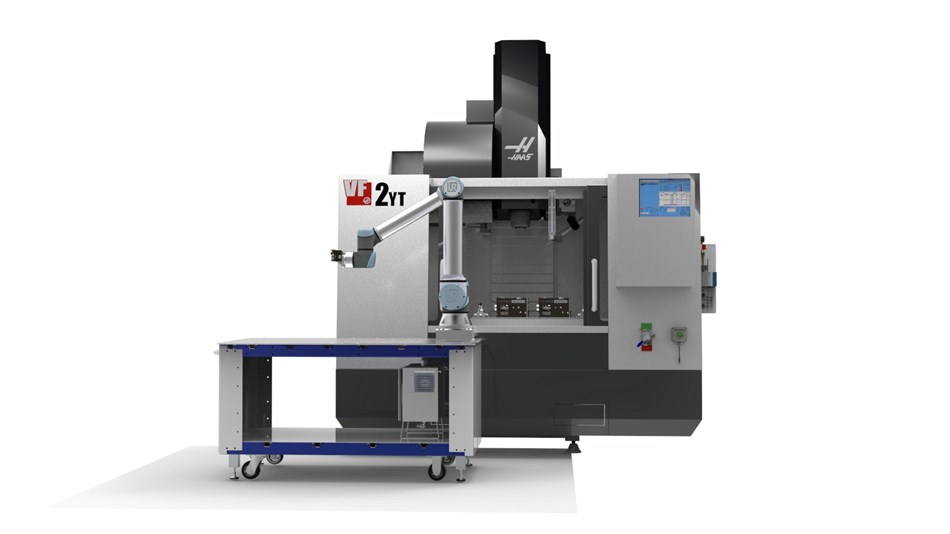 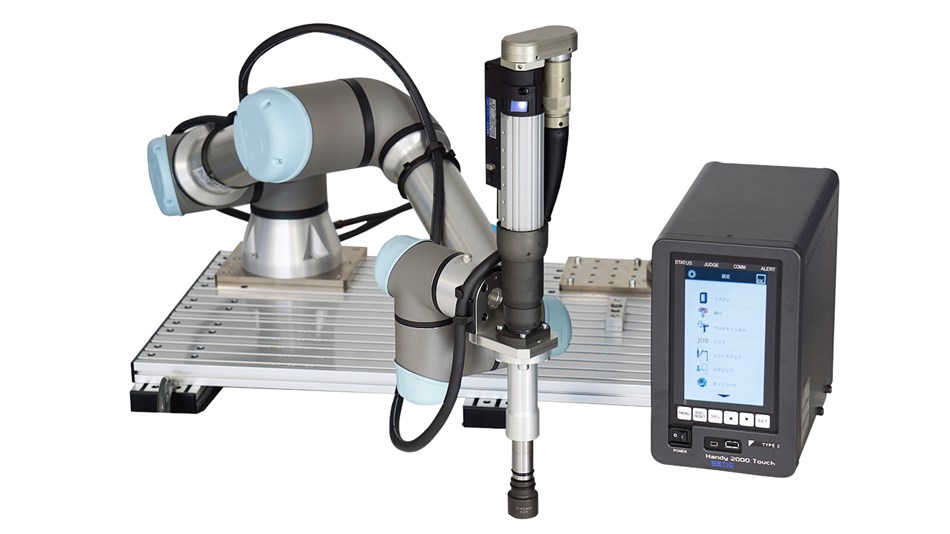 Estic’s High-Torque screw driving solution is equipped with a transducer and encoder to capture torque and angle data. This mechanism also enables various tightening controls while allowing detections of tightening defects such as cross-thread and floating screws.

UR’s application-diverse booth features zones for not only welding and machine tending but also assembly and packaging application areas. In the assembly zone, companies with the need to automate high-torque processes will get a hands-on demo on how UR+ partner Estic’s screwdriving solution can handle these tasks, using a patented pulse technology, which significantly reduces torque reaction and the wear on cobot joints.

The Robot Label Applicator from UR CSI Kolinahr showcases a UR10e in a tricky application, applying a label to the inside of a roll core. This demonstrates the dexterity of 6-axis UR cobots, which can reach places that are challenging for their human colleagues. Also in the packaging zone are UR+ partner Robotiq’s new Palletizing Solution that redefines ease-of-use, and the box EZ by Flex-Line powered by the UR5e cobot that erects multiple sizes of boxes. 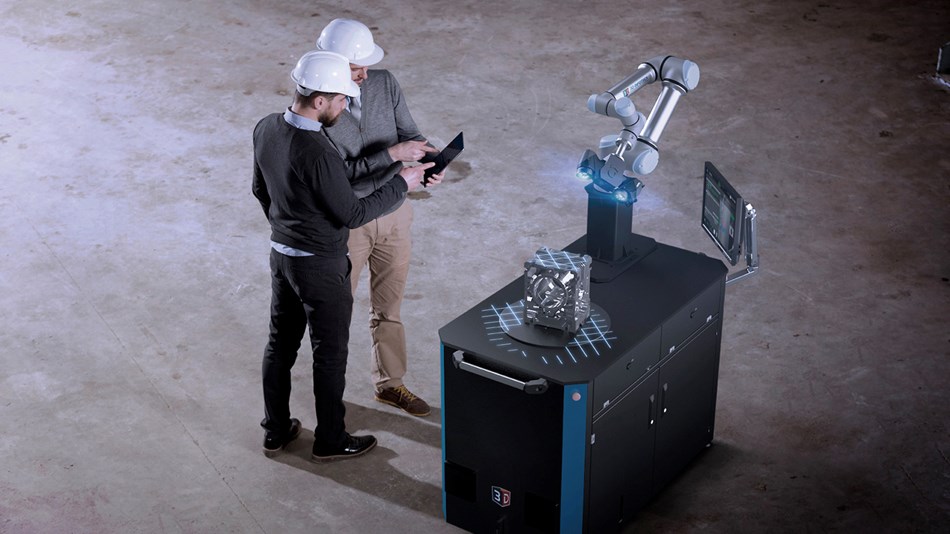 3D Infotech’s Smart Station is a turn-key inspection solution for the factory shop floor. It can run a complete inspection task with a single click thanks to Streamline, 3D Infotech’s automation software that drives all the hardware and software into a seamless process to speed up quality control, from 3D Scanning to analysis and reporting.

To ensure that the quality of manufacturing processes never fails, UR+ partner 3D Infotech will show automated robotic inspection solutions.,3D Infotech will feature its cobot-powered UMA Smart Station that can run complete 3D inspection tasks with a single click; Spotlight AR++, an augmented reality software for manufacturing environments; and PartID, a machine vision tool that allows non-technical operators and engineers to quickly validate the position and shape of an object.

Since UR launched UR+, the world’s first cobot ecosystem of 3rd-party components and application kits, the platform has grown exponentially. It now encompasses no less than 318 UR+ partners with 359 UR+ products certified for seamless compatibility with UR cobots. One of the UR+ partners, SCHUNK, will be featuring two EGP-C collaborative grippers on a UR5 in a machine tending application. After loading and unloading parts in the lathe, the UR5 will move the parts through SCHUNK’s new material-removal tool with a deburring brush, demonstrating higher utilization of the robot by completing deburring tasks between loading and unloading.

Besides the many hands-on encounters at the show, attendees can also learn about cobots at Automate’s conference agenda that includes UR-led presentations on “Top 10 Questions to Ask a Cobot Supplier,” “Cobots & Welding,” and “Connecting Automation to Business Challenges.”