Examples are valid for: All Universal Robots

This states some good practices when installing a Universal Robot in an environment where the robot is exposed to electromagnetic interference, this is often seen as communication problems, or lost packages.

It is always a good practice to establish a common ground for all equipment in an installation. The best way is to create a star point connected to factory ground, and then connect this point to all elements in the installation.

Keeping distance between different cables and ensure that the cables are not in near proximity to coils, motors or other equipment changing state or turning on and off, will reduce the interference.
The electrical and magnetic fields generated from electrical equipment decreases exponentially with the distance. So keeping at least 100mm between cables will ensure that the most of the fields has vanished and thereby does not conduct into e.g. the robot cable.

If the I/O’s on the Safety Control Board is connected to a PLC or other powered equipment, it is recommended to use the 24V power supply from the equipment instead of the one available inside the controller box. This makes all the external equipment running on the same supply, and makes a complete galvanic isolation between the equipment and the robot.

In some regions the mains power, is noisy with transients, spikes, dropouts and dips. In these situations a UPS can help ensuring a clean supply for the robot.

The UPS must have following specifications:

In some installations where the robot handles plastic object or picking items from a conveyer the tool it exposed to a lot of ESD.

In this case insulate the tool from the tool flange electrically can protect the robot for discharges that can cause communication issues. Ensure a proper grounding of the gripper. 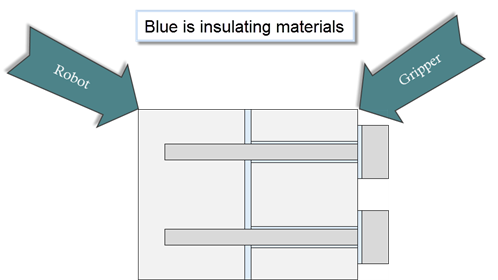 Ensure that the software installed on the robot is 3.1.18024 or later, since this software version introduced a more stable communication between the Safety Control Board and the Joints, Tool and Teach Pendant.

If the robots serial number is lower than the following, an update of the Tool, Safety Control Board and Teach Pendant firmware can have a great effect if communication problems are seen with these parts.

Ferrites can be used to reduce the interferences from entering the system.

If there are problems with the robot communication, or devices connected through USB or Ethernet, this could be a sign that the robot is exposed to EMI, either conducted through the power outlet or radiated from other wires close to the power or robot cable.

Adding a ferrite to these points can relieve the problems:

The use of a ferrite can be beneficial, they can be bought from different suppliers, a recommended one can be Laird-Signal Integrity Products (Part number 28A5131-0A2) with an impedance of 425 Ohm (Digi-Key Part Number 240-2199-ND) placed at the mentioned spots, with the cable going through the ferrite 2 times.