This how-to describes how to start the robot automatically, without using the "Automove" feature.
A Safe Home routine is implemented to avoid hitting different objects, from where the robot is when program starts, and until it gets to the normal starting procedure.

When first waypoint in program is either Variable or Relative, robot will start moving when "Play" is pressed, and no "Automove" is needed.
This needs to be taken into account in the risk assessment.
The Safe Home routine is only as good, as the complexity designed by the programmer and is not related to the Safety Settings of the robot.

Consider a workspace for the robot, where it during the program, will go into a box in the robot workspace.
If the robot for some reason stops inside the box, and the robot program needs to be restarted (power interruption, E-stop or other reasons) , the robot might need to take a different path from the position it stopped in and to the normal start position. 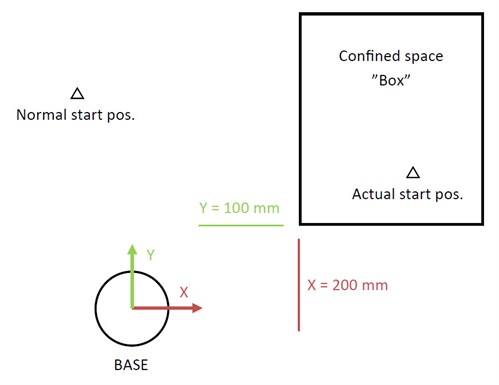 We implement a Safe Home routine to make the robot take different trajectories to the normal start position, depending on where the robot is when the program starts.
Thus the operator will not have to use Automove or manually jog the robot to the start position. 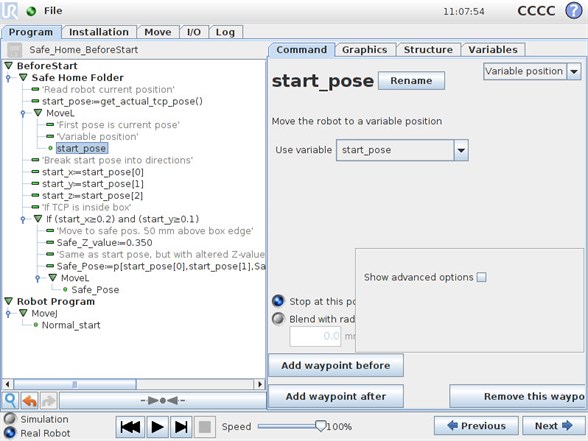 See attached program in the bottom.

Above Safe Home routine is only a very simple illustration of how this could be done.
More complex trajectories and if-statements can be done, to determine the robots' position for larger programs working closely to machines.