Founded in 1983 and based in the town of Åseda in Southern Sweden, FT-Produktion has a diverse staff of 25 employees hailing from Sweden, Norway, Lithuania, Syria, and Thailand. Working in tandem with the neighboring company Profilgruppen, FT-Produktion supplies metal parts measuring up to 7.5 meters in size to a variety of industries.

In order to keep up with an increase in orders the company turned to a flexible collaborative robots – or cobots – solution to boost productivity without adding personnel. FT-Produktion now saves 500 hours when manufacturing a series of 150,000 parts. The new technology also elevated job satisfaction by bringing variation to daily routines – a key advantage in an industry battling to attract and retain qualified labor.

FT-Produktion is a machine shop servicing a wide range of customers, including carmakers, construction companies, and the furniture industry.

When FT-Produktion was  approached by big industry players such as Volvo, Renault and Scania with big order requests, the company knew no machine shop in its right mind would want to turn down orders of this magnitude – even if it meant pushing capacity and productivity to the limit. But in a labor market where recruiting qualified employees is easier said than done, it takes innovation to increase output capacity.

“We chose a combination of solutions from OnRobot, Universal Robots and EasyRobotics because they are easy to program. The investment in this solution will pay for itself in just nine months,” says Joakim Karlberg, who owns and operates the family-owned machine shop FT-Produktion together with his sister. “Now we can fill significantly bigger orders.”

In 2017, the company made the largest investments in its history by renovating much of its machinery. A small share of the overall investment went to a key addition: the introduction of a flexible cobot solution comprising a UR5 cobot from Universal Robots equipped with two RG2 robot grippers from OnRobot mounted on a ProFeeder turnkey automation platform from EasyRobotics. This effective trio of Danish cobot solutions has now provided automated machine operation at FT-Produktion for more than a year. As a result, the sales department can accommodate orders with much higher volumes and shorter delivery times – without asking employees to work overtime.

“The demand for productivity continues to grow. But relevant manpower is hard to come by these days. Thanks to automation, an operator can keep three or four machines running at once without stress,” says Karlberg. “We try to eliminate monotonous manual tasks by roboticising the high volume production runs, giving employees more time to work on smaller runs with greater variation in their tasks.”

With the cobot constellation, a run of 150,000 units can be manufactured in less than two months with the robots working up to 16 hours a day, five days a week. Once every 25 seconds, the RG2 gripper on the UR5 cobot arm removes a raw part from the ProFeeder’s parts tray in the mover, a detachable part of the feeder, and inserts it in a CNC machine. In the same robot arm movement, the other gripper takes a finished part out of the CNC machine and places it in a container. This is made possible by the robot arm’s “two hands”: the RG2 double gripper from OnRobot that reduces the cycle time by 12 seconds per task. In other words, FT-Produktion saves 500 hours when manufacturing a series of 150,000 parts.

The Swedish machine shop manufactures 650 different aluminium parts and fills 7,000 orders annually, with production runs ranging from five to 150,000 units. Given the wide range of tasks and volumes, flexible automation is absolutely essential. A single robot solution must be capable of handling many different parts with minimal downtime when reconfiguring from one production run to the next.

In the past, an employee had to manually insert four parts at a time in a CNC machine, wait for 90 seconds, and then repeat the process for the duration of the workday. Now the solution requires just five minutes to manually fill one of the ProFeeder’s two movers. When the robot has emptied one of the mover’s parts trays, the operator removes the empty mover and clicks a filled mover into place in the ProFeeder, allowing the CNC to rapidly resume operation. Using the Lean Robot Automation concept from EasyRobotics, the filling process can be further optimized if the machine shop places the parts for processing directly into one of the mover’s parts trays in the preceding step of the overall process.

“It seems like there’s no end to this economic upswing, and therefore no end to our bottleneck issues. So we can already see many more opportunities for improved optimization and automation,” says Karlberg. “We’ll probably have an additional two cobots in our facility within the next two years."

“The demand for productivity continues to grow. But relevant manpower is hard to come by these days. Thanks to automation, an operator can keep three or four machines running at once without stress. We try to eliminate monotonous manual tasks by roboticising the high volume production runs, giving employees more time to work on smaller runs with greater variation in their tasks.”
Joakim Karlberg Owner, FT-Produktion. 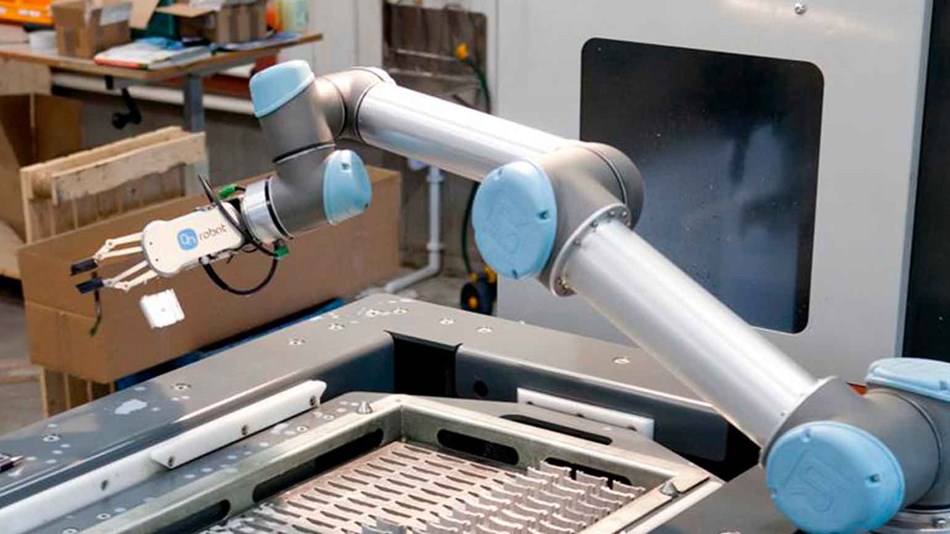 FT-Produktion discovered cobot solutions during a meeting with the Universal Robots distributor Edströms, that supplies and installs turnkey cobot solutions. 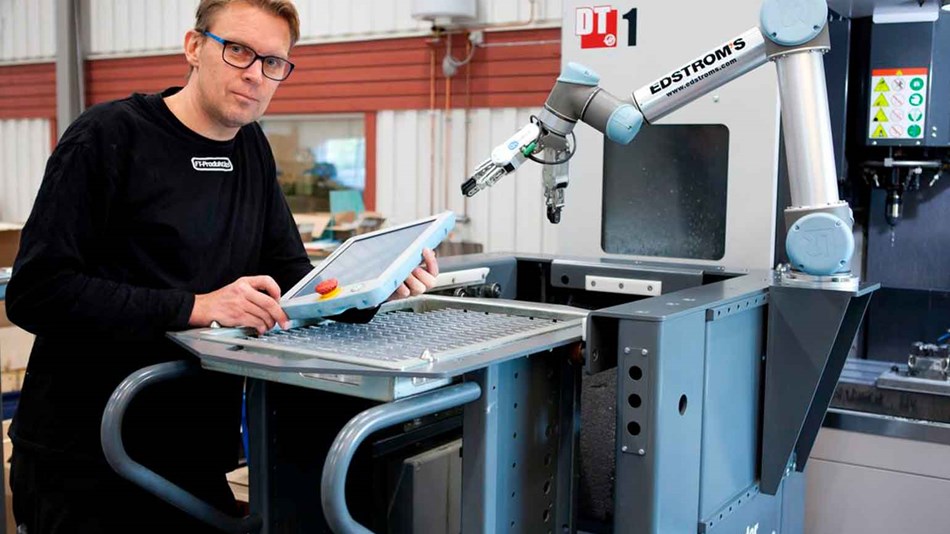 “I would like to see more robots here,” says Mikael Andersson, who is not afraid of losing his job. Rather, his daily tasks are more varied and interesting following the introduction of automation technology at FT-Produktion. 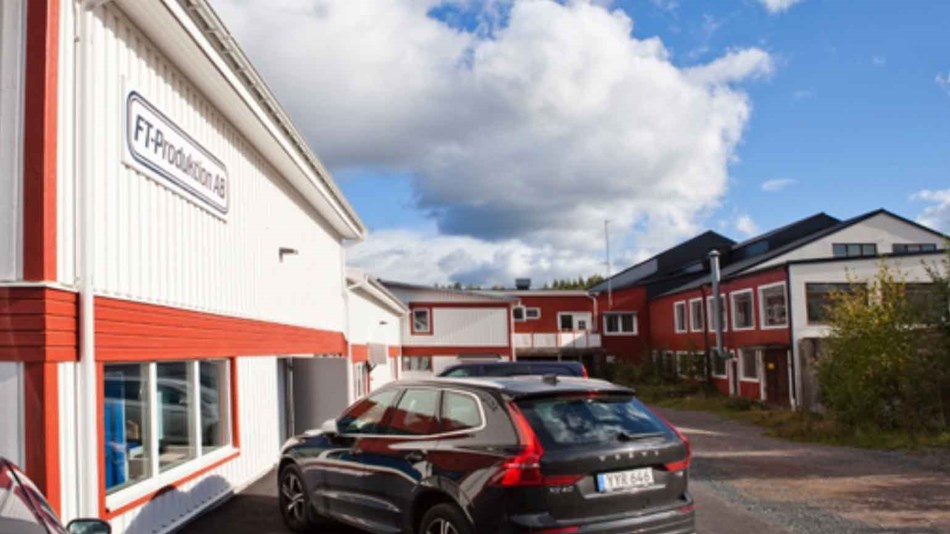 The family-owned machine shop FT-Produktion is located in Åseda in Southern Swedish and has 25 employees. FT-Produktion has annual turnover of SEK 19 million. 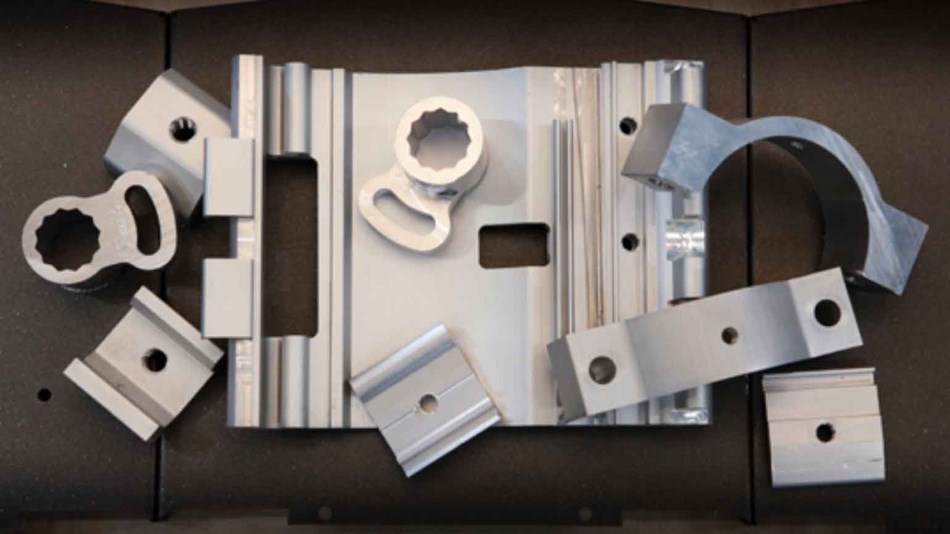 Working in tandem with the neighbouring company Profilgruppen, FT-Produktion supplies a wide range of customers, including carmakers, construction companies, and the furniture industry. The company’s metal parts measure up to 7.5 meters and are used in the manufacturing of balconies, solar panels, electrical fixtures and lorries.

Mikael Andersson is a machine technician at FT-Produktion. One year ago, he also became a robot programmer and robot operator following two days of theoretical and hands-on training at Edströms. The training course was based on the Universal Robots Academy concept, which includes ongoing follow-up training via free e-learning courses. Mikael also received training in the use of the EasyRobotics’ ProFeeder and the dual gripper from OnRobot, enabling him to easily and flexibly install, program, operate, and reconfigure the overall solution.

“It was actually easier to use robots than I had expected. If you’re standing there all day, feeding the same machine with parts, you can feel it in every joint of your body at the end of the day,” says Mikael Andersson. “Now my job is less monotonous and much more interesting. It’s fun to watch a robot at work! I would like to see more of them here. This cobot solution is so easy to reconfigure that even small production runs are feasible in terms of costs.”

The new generation of collaborative robot arms also requires high performance accessories. For example, the functionality and user-friendliness of grippers ultimately determines the scope and variety of tasks and parts that can be automated, as well as the ROI time for automation investments.

“It only takes 10 seconds to change to a different part on the robot’s display,” says  FT Produktion’s machine assistant, who sees the robot as a useful tool in a time of high demand and limited labor supply. “The robots are not taking any jobs. We can fill more orders and deliver more detailed parts with higher quality when we use the robots. They have been easy to install and adjust, so we’ve been able to do it all ourselves, with just a little help over the phone from Edströms.”

FT-Produktion’s first cobot application is based on the plug & produce principle, which makes flexible automation easy and profitable for small and medium-sized manufacturers. The complete cobot solution includes the following components from the global leaders in modern collaborative robot technology:  A UR5 robot arm from Universal Robots, a ProFeeder from EasyRobotics, and a dual gripper solution with two RG2 grippers from OnRobot. This fully-integrated robot solution offers intuitive operation and programming, with 3D visualisations on the robot arm’s touchscreen. The ProFeeder and RG2 are certified by Universal Robots and offered through the Universal Robots+ platform.