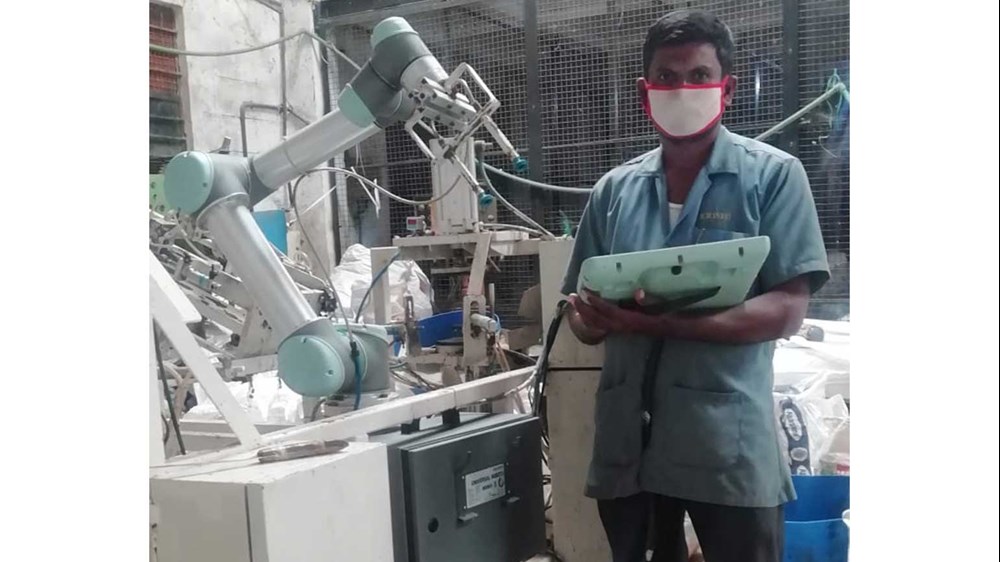 Irrigation equipment is critical for Indian agriculture and demand is high, but many firms have been hit hard by staff absences due to COVID-19. Krishi Group, one of India's leading agricultural equipment manufacturers, was faced with a 40-50% reduction in its workforce, and struggled to keep up with demand until it introduced a UR cobot to its facility. The cobot now works alongside a human on quality control tasks that previously required two workers to complete. As CNBC Awaaz reported (see video below), the cobot has helped with social distancing too...

Taiwan's Brain Navi recently unveiled its 'Brain Navi Nasal Swab Robot,' an automated system for taking nasal samples that's powered by a UR cobot. The cobot performs several tasks during the procedure: first, it picks up a swab with help from one of Robotiq's 2-finger grippers. Then it identifies the subject's nostril using a smart camera attachment and with the assistance of a force sensor, carefully inserts the swab into the patient's nasal cavity. The cobot turns the swab slowly, waits ten seconds, slowly removes the swab and places this in a tube for transport to a testing facility. The system is currently going through the regulatory process in both the United States and Taiwan.

See the Brain Navi Nasal Swab Robot in action below:

All Axis Machining, a 20-person contract machine shop and fabricator based in Dallas, TX, was hit by reduced production capacity due to social distancing requirements. Faced with the prospect of turning down future orders, the company deployed eight UR10 cobots for essential machine tending tasks, enabling it to increase production, despite the labor uncertainty caused by the current pandemic.
“It’s the best thing we’ve ever done, I have not lost any spindle time because of the pandemic,” says owner of All Axis Machining, Gary Kuzmin. 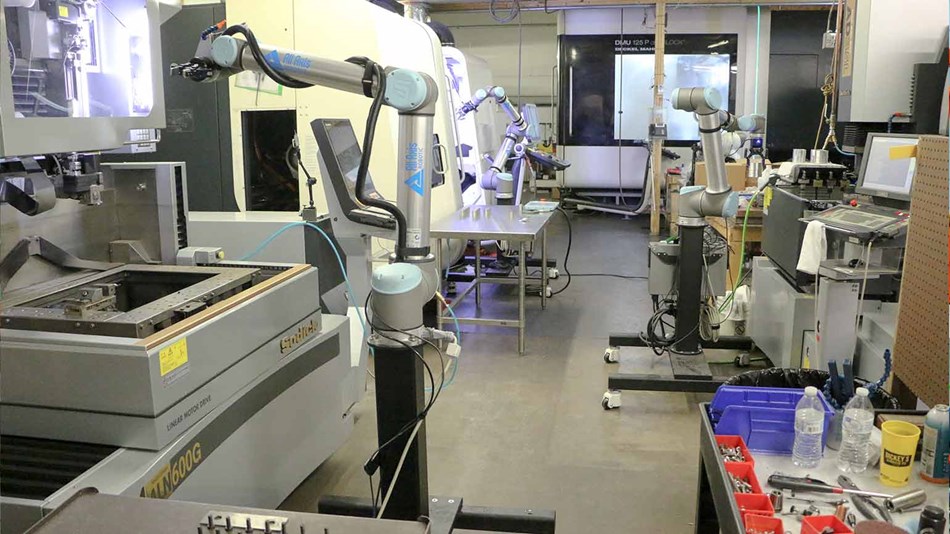 When social distancing regulations led to a reduction in All Axis Machining's production capacity, the company turned to cobots to ensure continuity.

In April 2020, Alabama-based HomTex shifted production to start making high performance, disposable face masks to help combat COVID-19. Following the success of that project, HomTex has announced a USD5 million investment to add 15 lines with the capacity to produce 350 million masks per year. With plans to use Universal Robots UR5e for end of line case packing and the UR10e for palletization tasks, the company plans to produce 350 million masks per year. 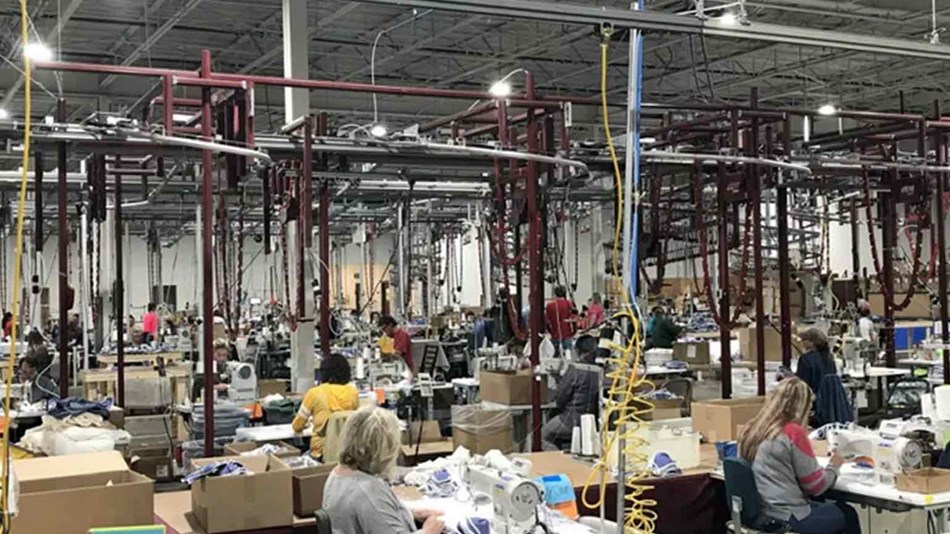 Drim Robotics, a UR Certified Systems Integrator based in Czechowice-Dziedzice, Poland, has developed a mobile disinfection platform that combines a UR5 cobot arm mounted on a MiR100 platform. The system is designed to spray disinfectant and is managed remotely using cloud software, enabling workers to sanitize large areas without putting themselves at risk.

Medical equipment makers have been scrambling to stock up on supplies due to COVID-19, leading to a global spike in demand for precision components. Netherlands-based RM Precision Machine Co., has seen a massive increase in demand for its respiratory components, which prompted a company decision to run all its machines 24/7, rather than the usual 8/5. To ensure round-the-clock operations on its CNC machine, the company installed a UR10 cobot. The move has proven a success, resulting in a massive reduction in the turnaround time from order to production –down from an average of two months to just 2 weeks.

The UR10's ease of use was a major factor in allowing RM Precision to handle the sudden jump in production, with the company's CNC-Progammer and Miller, Daniel van Voorthuizen, noting that after staff completed a short online UR Academy course, “the robot was up and running in no time.” 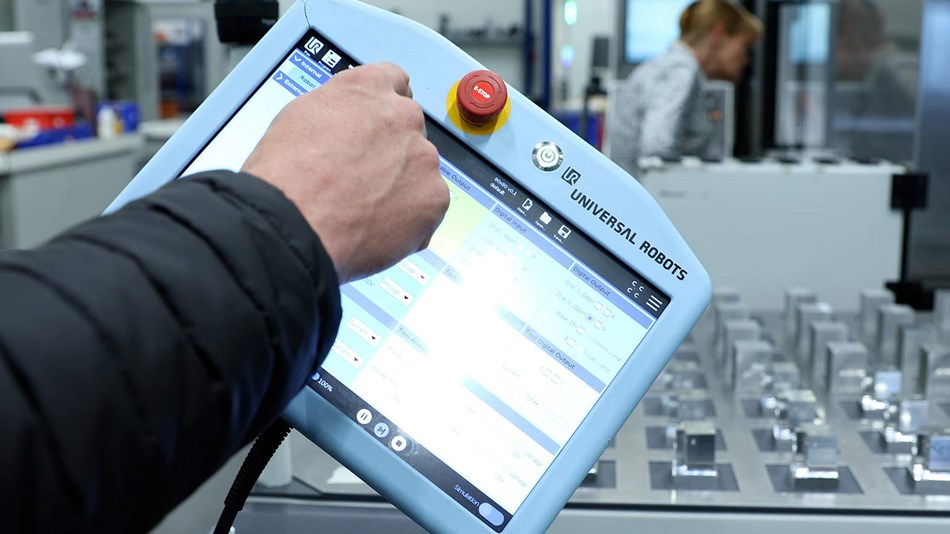 When Danish Superliga soccer team Hobro IK returned to action recently, the club needed a way to bring some color and atmosphere to the touchline, while still complying with social distancing regulations. In the end, they turned to Universal Robots distributor Technion for support. The result? Several flag-waving UR cobots turned out to show their support for Hobro.

Check out Hobro's 'Cobot Ultras' preparing for the action! 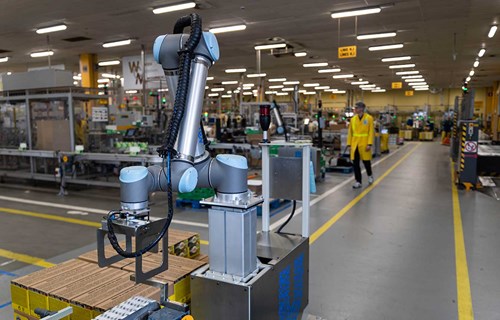 Using cobots to conquer the new world of work

The global Covid-19 pandemic has led a significant amount of people to re-evaluate their working lives. Many have decided to turn away from roles that are repetitive, lack progression opportunities or pose risks to their mental or physical wellbeing. Cobots are providing an answer to this recruitment and retention challenge by freeing workers from the dullest or riskiest tasks on the production line and helping employers create more efficient workflows. 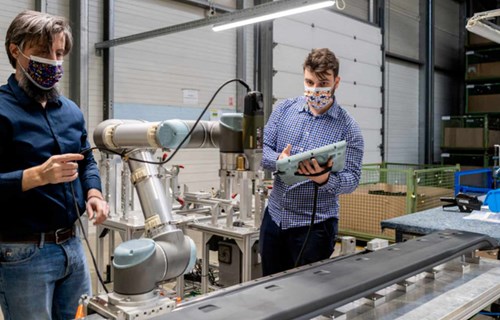 What Have Manufacturers Learned After a Year of COVID-19?

If nothing else, a year of COVID-19 has taught us to expect the unexpected. Of course, manufacturers have always been highly attuned to change, but the COVID-19 pandemic hit the manufacturing industry seemingly overnight, causing deep and long-lasting impacts. A year later, we can look back and see what manufacturers have learned about how to adapt and succeed in the face of adversity. 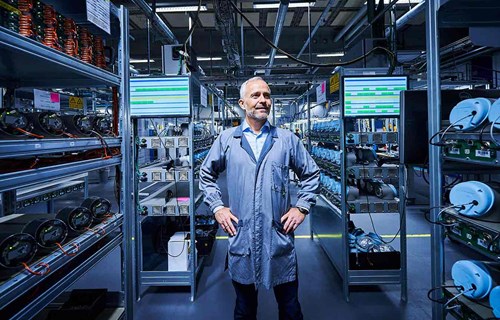 Quality – Standing out from the Crowd

In the latest installment of the Quality Matters series, our Q&A with Martin Kjærbo, UR's VP of Operations and Supply Chain talks about UR’s quality vision, human-cobot collaboration on UR’s own production lines, and the importance of treating quality management as a process.