A robot has position and orientation. In particular, one of advantages in 6-axis robotic arm is to pose diverse orientation. This article is written for better understanding of robot orientation.

A rotation is represented in a matrix. In Cartesian space, a robot orientation is decided by a combination of rotations in X, Y, and Z direction, and we can have a 3-by-3 rotation matrix for each orientation. 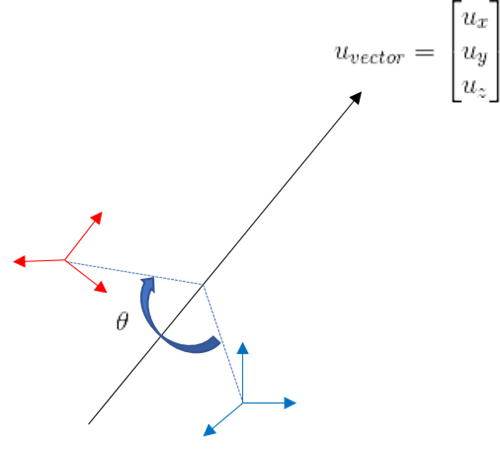 In order to define an orientation with the axis-angle representation, we need 4 values in total; three elements of unit direction vector and rotation angle. That is the reason why the values of rotation vector are not intuitive.

You may be more familiar with roll, pitch, and yaw to represent the robot orientation. In RPY, the order of rotation should be critical. For instance, despite the same amount of angles, the result of rotation roll->pitch would be different from that of pitch->roll.

Although the rotation vector is used in Universal Robots by default, you should be able to see the RPY values in Move tab of Polyscope. In addition, you can use the URScript functions to convert the representation between RPY and rotation vector.