Universal Robots’ annual result, which surpassed the DKK 1 billion 2017 goal set in 2013, was due in no small measure to the company’s impressive fourth quarter returns of USD 54 million which is a 61 percent improvement from the same period a year ago and the best quarter ever at UR. The operating profit more than doubled from 9 percent in 2016 to 19 percent in 2017.

“We credit our amazing 72 percent year-over-year revenue gain to a continuing awareness of the economic advantages for our market leading collaborative robots for a larger range of applications, and the continued commitment of our Universal Robots employees and partners to be the cobot technology of choice,” said Jürgen von Hollen, President of Universal Robots. “Our outstanding fourth quarter and year-end result are truly a team effort which is the fruit of our unique Universal Robots community, that at its core has a shared purpose to empower staff, partners and our customers – together driving the successful growth of the community.”

“Looking ahead at 2018, we expect further revenue growth of at least 50 percent,” von Hollen continued. “The cobot market is expected to continue to be one of the key growth drivers in the automation market the coming years. My expectation is that we at Universal Robots will continue to leverage our position as the cobot market leader and grow at the same or above the collaborative robot market growth rate for 2018. This, however, can only be done by focusing on our goals of staying ahead technologically, expanding our Universal Robots+ platform and further globalizing our regional sales and service footprint and reach.” 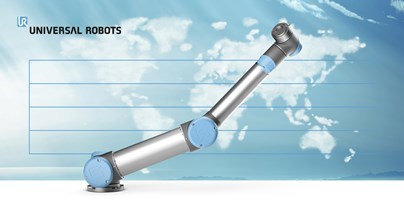 A testament to the increased investment around the world, Universal Robots recently opened not only one but two repair centers – the first of their kind outside Denmark – in the United States and China to be closer to its users. “Our customers cannot afford any loss in productivity, so we want to avoid downtime at all costs. Our aim is that a cobot from Universal Robots should never be sitting idle, waiting for repair or spare parts,” said Jürgen von Hollen.

Universal Robots also recently opened a new facility in Boston, USA, which is the first step of expanding global functions departments outside Denmark. “The new setup in Boston will help us get access to more resources and highly skilled employees. Scaling the organization, especially within Research & Development and the commercial sales and service organization, will be key for Universal Robots in 2018. With two commercial and Research & Development sites we will be able to scale faster and get more velocity when looking for and attracting the best talent and skills to Universal Robots,” explains von Hollen and adds: “We are also opening sales offices in Italy and Turkey and will be establishing an office in Mexico and a third office in China”.

A main driver behind Universal Robots’ success is its dedicated workforce.

“I am elated to see that 91 percent of our team are proud to work for Universal Robots when reviewing the latest results of our staff engagement survey. It’s a key priority for me to ensure that Universal Robots is one of the most attractive companies to work for. A company where we offer training and development that allows people to grow to achieve their personal ambitions.”