SFEG was looking for ways to make SFEG more competitive on the global scale, while taking more advantage of existing machinery.

“One of our biggest challenges is we’re a high mix-low volume producer, most of our lines don’t run all the time, so trying to find a way to put robots on the line in the traditional sense was a very big challenge,” says Matthew Bush, Director of Operations at SFEG.

“We wanted to build a mobile, flexible robot force. The only way we would accomplish this was with a collaborative robot. We only saw a couple of offerings and the UR robot was the only robot that we thought could do the job. It’s got the speed and precision of a standard industrial robot with the ability to move around and work next to humans.”

SFEG placed the UR robots on pedestals with wheels and is now building the fleet of mobile UR robots deployed throughout the sheet metal department, integrating them in the entire production cycle from cutting the initial blank on the blanking press to forming, folding and final assembly of the electrical components. Additional robots are planned to help tend the turret presses and press brakes.

“We want to have robots standing by, waiting for a job to do. When the staff arrives in the morning, we’ll have work-orders printed for employees to wheel the robots over to the tasks at hand that day.”

The UR robots working the motor field line are a UR5 and a UR10 robot. The UR5 is placed at the end of the line right next to an employee that hands the robot a motor field part. The UR5 picks up the part, puts it in a holder, picks up a wire cutter to trim the wires, and then places the part for the UR10 robot to pick up and place on a conveyor for final assembly. The UR5 cuts 16,000 wires daily, a job that used to be performed manually.

“It’s a potential carpal tunnel syndrome application. So we thought that was a great place to put robots – let them get carpal tunnel!” says Bush.

The two UR robots working in tandem communicate their position to each other through Modbus socket connections.

“We can interlock multiple robots together and read through Modbus the TCP connections and robot status. We can also pass information along to other software packages, and collect data. It opens up a lot of doors to do a lot of things we’re just now beginning to look at,” says Principal Engineer at SFEG, Jamie Cook, who found the implementation time to be a third to half of the time compared to previous robot experiences.

One of the new applications now using the UR robots for data collection is in the live testing of new designs, where a small motor manufactured at SFEG is placed in the customer product.

The robot turns the product’s switch on and off, runs it for a minute on, 30 seconds off, for the next 400 hours. The robot collects data pertinent to the test such as max amperage, average amperage, and the number of cycles completed, transmitting that data to a data storage.

“It’s a quick way for us to perform life cycle testing. We didn’t have to set up a lot of equipment; the initial program took us only about 5 minutes to create,” says Matt Bush.

“It’s enabled us to actually engage our customer in the testing as well, they’re excited to see us use new technology to push our design faster into production. It gives us an advantage over our competitors thousands of miles away in low-cost source countries. We’re now winning orders against Chinese competitors and bringing back work that used to be sourced in China as well.”

Another task now handled by the mobile UR robot fleet is filling epoxy into circuit boards.

“In the past, employees would make up a big batch of circuit boards and they would stand there and manually fill them with two-part epoxy and send them down the curing line. Today, the robot does that all day long enabling us to go to a one-piece flow,” says Bush.

“We’re looking at everything we’re designing now new to make sure we can assemble it with a robot. If we can’t put that together with a robot, we’ve got to go back to the drawing board and try again.” 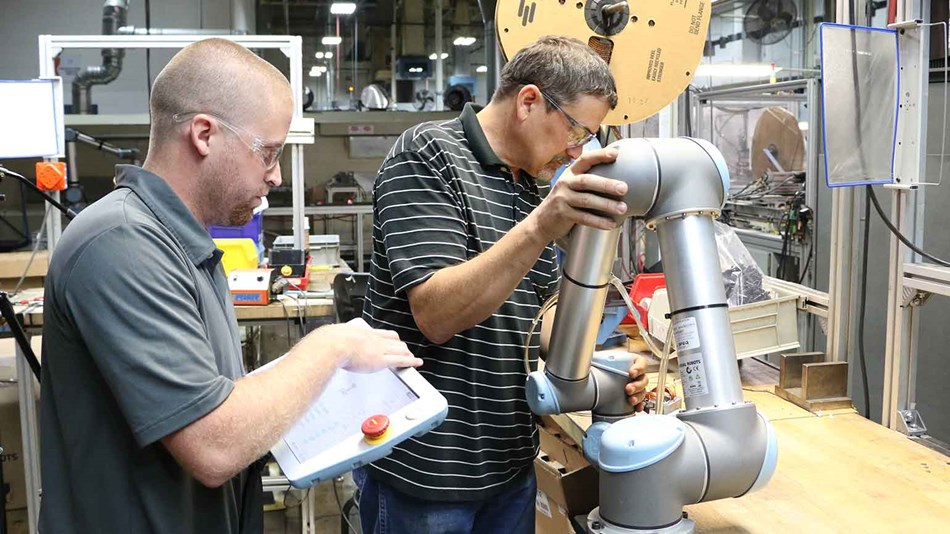 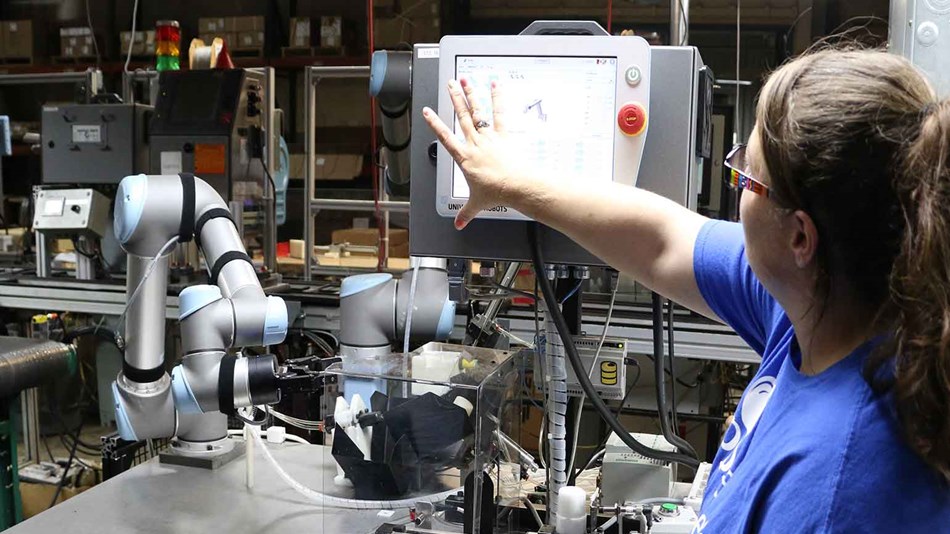