When Paradigm launched the “Midnight Cherry” finish on a line of new speakers, the market quickly embraced the new product made entirely in-house at the Toronto-based manufacturer now faced with a challenge to make even more than anticipated of the new cabinets. .

“In order to produce that finish, you have to apply multiple layers of lacquer and between each layered application, you have to sand and buff, sand and buff. There’s a lot of manual labor involved in that. The problem is to find people who can do that, we just couldn’t find enough skilled people,” says Director of Operations Oleg Bogdanov.

The company had already implemented one robotic cell with a cartesian type robot, but it required a lot of safety guarding around it for the protection of the worker.

“It really didn’t allow for an employee to work in conjunction with the robot at all. The application of buffing is one that requires a lot of observation and collaboration by the operator, so having the work being done in a remote cell just didn’t seem to be a workable solution,” says Senior Manager of Production Services at Paradigm, John Phillips.

Paradigm had an industry expert with a specialty in robotics applications come in, making the company aware that collaborative robots from Universal Robots could be a solution to the Midnight Cherry challenge..

“Collaborative robots was a new technology and it lead to further investigation. This kind of robot allowed us to have a human and a robot working in the same workspace. They’re now working in a pendulum type of an operation where they can safely interact, allowing the human to check whether the robot has done an adequate amount of work before the final polishing is handed over to the human. It’s a very hand-in-hand kind of operation,” says Phillips, emphasizing the simplicity of the robot cell.

“Usually with all of the physical guards that are required in order to make the work cell safe for the human, there’s a long implementation period. The cartesian robot took five months. The implementation from the time of the receipt of the UR robot was just over a month.”

The implementation solved Paradigm’s back log on the popular cabinets by increasing throughput by 50%. Before choosing the UR robot, Paradigm conducted a thorough research of the collaborative robot market.

“Once we realized that a collaborative robot was a viable alternative for us, we did our homework and checked around the rest of the opportunities that were out there from different manufacturers. We found that for our application, the UR robot was not only the best robot for the application, but it was also the most cost efficient,” says Phillips, mentioning the UR robots’ built-in, adjustable force mode feature as another deciding factor.

“If too much force is applied, the surface heats and the results go the opposite direction to what you’d hoped. So having the robot work with a specific force was a huge advantage. We were aware of technologies that allowed for a force feedback system but they were actually as expensive as the entire UR robot. So it was quite exciting to find that it had capabilities of force feedback within its inherent structure,” says Paradigm’s Manager of Production Services, who is now investigating future applications for the UR robots.

“We’re looking forward to being able to use Universal Robots in our various paint spraying processes and we’re also bringing in a new line of speakers that have a parabolic shape where we could utilize the adjustable force mode that allows us to determine a specific force at a particular point in the path of the robot. This will be very useful when it comes to sanding those non-plane facets.”

FILL OUT THE FORM AND WE WILL CONTACT YOU!

Paradigm Electronics is a manufacturer of high performance loud speakers and subwoofers. The entire production from R&D to finished product takes place in-house at facilities in Canada.

“Thanks to the robot from Universal robots, we were able to increase our throughput by 50% ”
Oleg Bogdanov Director of Operations 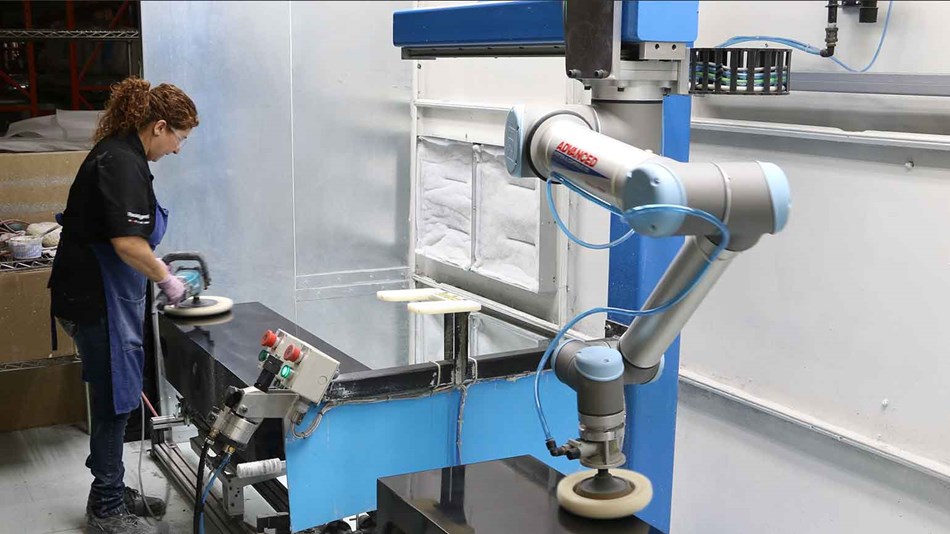