Helsinki's new public central library Oodi wanted to develop the library's internal logistics using robots to give personnel more time for customer service. The system had to be able to operate safely among people, sorting up to 2000 items hourly. Universal Robots' integrator partner Mikro-Väylä Oy designed a system for Oodi that consisted of a return machine, a sorting conveyor belt, machine vision and a shelf point for UR's cobot. In addition, autonomous mobile robots (AMRs) from Mobile Industrial Robots (MiR) transport filled shelves and boxes from the basement to the customer premises. Oodi is happy with the automation. The system has freed up two employees to serve library users.

Helsinki's new, publicly maintained central library Oodi has 100,000 items, magazines, newspapers, sheet music, films and games, of which about 1300-1500 items are borrowed daily. Oodi is part of the Helsinki City Library, which has more than 30 locations and a common collection. Traditionally, the book return process has been handled by people. Sorting returned items by hand requires precision but is physically monotonous. It is a challenge to work ergonomically.

Specialist librarian Riia Ollanketo says that automation was by no means unknown in the library world. “Libraries have used various lending and returning machines for decades. We knew that the number of visitors will be large and there will be a lot of returns every day. We wanted to automate the return process within the library so that staff are available to customers and not hidden in the basement to sort material”, she says.

The challenge of automation was that there is no single system in the world that can automate all stages of the process. It had to be built from parts. 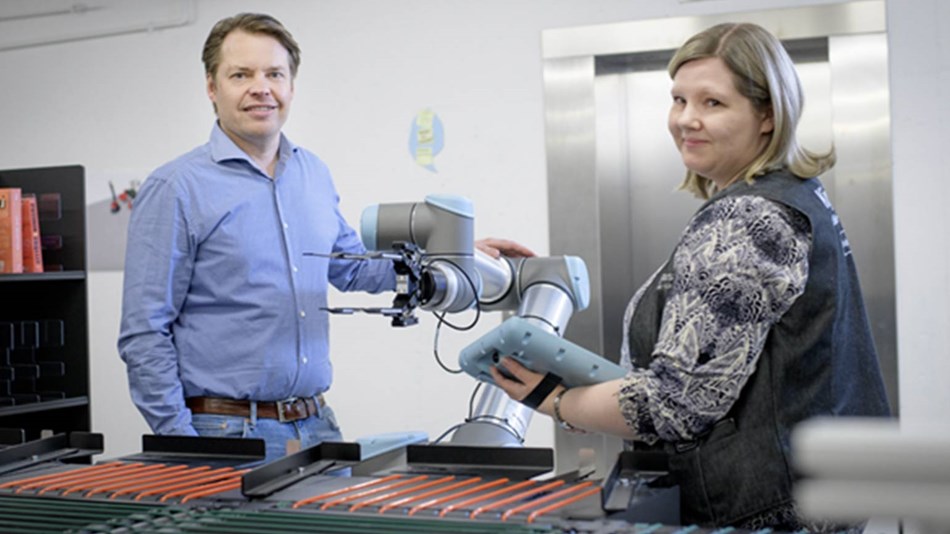 “At first, the robot arms were a little scary because I had seen similar ones mostly in the movies. When you got to work with them, try out their programming and see what they could do with them, they felt almost positively human.”
RIIA OLLANKETO Special Librarian, Oodi Helsinki

FILL OUT THE FORM AND GET IN CONTACT WITH OUR EXPERTS TODAY.

Oodi is a living room for Helsinki residents, where people engage in teamwork, spend time and carry out small do-it-yourself projects. The automation system must not arouse fear in people, and it must be able to operate safely among people. Oodi was looking for an idea through a tender on how to automate the process efficiently and securely. 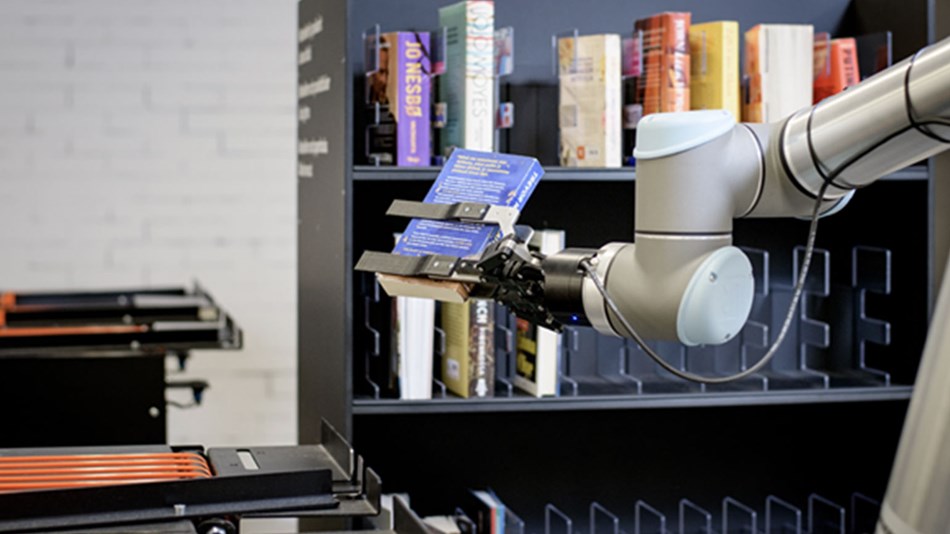 Mikro-Väylä Oy, the integration partner of Universal Robots, made a proposal to Oodi, which automates the most important steps in the return process. The first part of the system is an automatic return machine that identifies the RFID tag of the book and directs the book to the conveyor belt. A machine-vision conveyor belt drops the items into the appropriate bins. This is all conventional technology. In addition to these, the system has two Universal Robots UR10 arms that bring items on quick loans to the shelf.

The conveyor belt signals to the cobot arms when the book can be lifted onto the shelf. Attached to UR's arms, a Robotiq gripper lifts the book off the belt. Extra-long fingers get a good grip on even the biggest and loosest comic book. Finally, MiR’s autonomous mobile robots transport boxes and shelves to the right floors and departments using a navigation system and an elevator. Fleet management system of Oodi also communicates to the elevators, which open the doors to the robots and automatically transport the robots to the correct floor.

The whole automation system requires a total capacity of 2000 items per hour, of which Universal Robots’ hands are quick enough to sort 700 items per hour. “At first, the robot arms were a little scary because I had seen similar ones mostly in the movies. When you got to work with them, try out their programming and see what they could do with them, they felt almost positively human,” says Ollanketo.

Due to the name competition organized for the public in social media, MiR's mobile robots are called Tatu, Patu and Veera according to the characters in a Finnish picture book. Technically, the most challenging issue was to solve how the shelving of books was done, says Miika Vacker, CEO of Mikro-Väylä Oy. “The books come in different sizes. Some of the books are big and floppy, some are small and hardcover. The cobot had to be able to grip them tightly, turn them in the air and lift them to the shelf just where they belong,” he says. As a basic solution, Mikro-Väylä found Robotiq's 2F-85 gripper. The integrator partner built extension fingers on it so that even the largest paperback book wouldn’t warp when shelved. 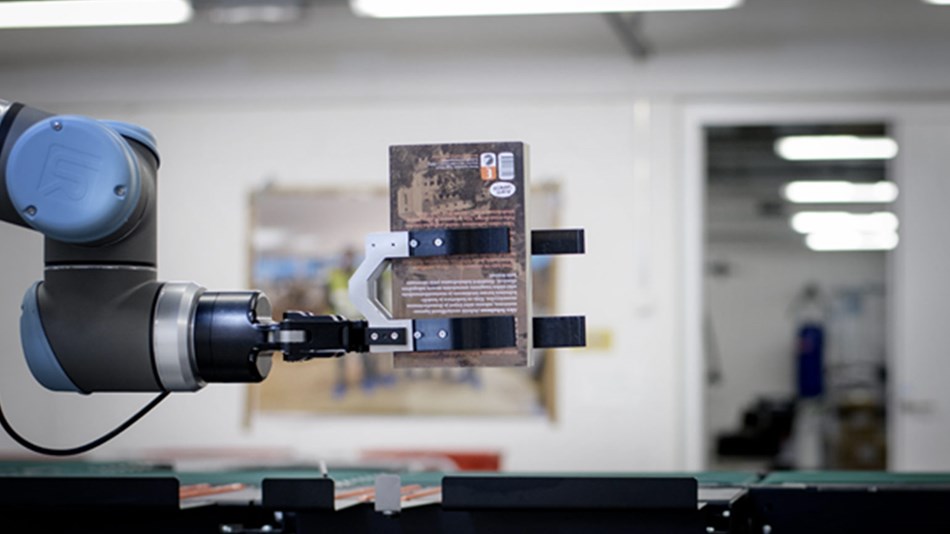 Although UR's cobot is safe from the start, a special Sick's nanoScan3 Core safety laser scanner was installed on the arms to interrupt operations if a person comes too close. The sorter coordinates Universal Robots UR10 cobots using the I / O system and MiR mobile robots via an API interface and tells when the shelves are ready to be transported. The software created for logistics, the Fleet Management Software System, communicates with the return system, so MiR cobots know where to take the shelf or box next.

According to Ollanketo, Oodi is satisfied with the system and considers it reliable. “Cobots are easy to use. Employees should only know how to start the cobots. For example, I do not have any technical education, although I am interested in technology and the opportunities it offers”. “Error situations happen, but surprisingly few. The most common problem arises when the sorter offers a slightly skewed book, which means that the robot hand does not get the right grip on the book,” says Ollanketo. 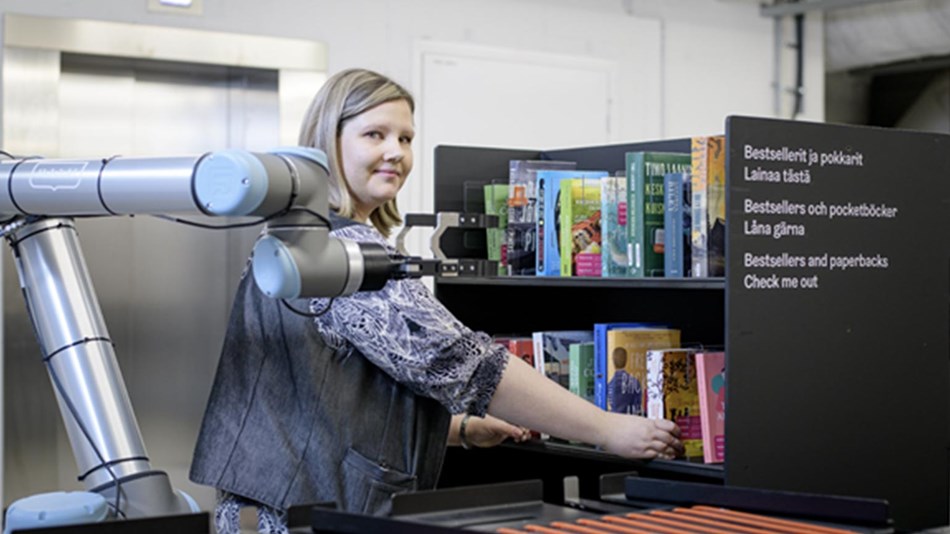 The Oodi system has gained a lot of international attention. It has been visited by many different groups, both librarians and business people from different parts of the world. Thanks to automation, Oodi has been able to move two people from sorting books in the basement to the customer service center of the library. According to Ollanketo, cobots have also improved ergonomics. Cobots take care of part of the shelving, allowing the books to return to circulation without the need for staff to intervene in the process at all. “The project has helped me see where cobot arms could be useful to us in the library. I would recommend the use of cobots to others as long as the library has first fully considered its needs”. Miikka Jokinen, Country Manager for Universal Robots Finland, says that Oodi is an excellent example of the versatility and flexibility of cobots. “These are probably the first Universal Robots cobots installed in a library and show the scope of the applications nicely. It’s about human-robot collaboration,” he says.

Oodi is the Helsinki Central Library that opened in 2018 and has gained international fame also for its exceptional architecture. Oodi has 100 000 items and 64 employees.