Updating the shop from older lathes to modern CNC machines improved product quality, but also increased cycle times, which impacted deliveries and didn’t effectively use valuable machinists. NEU needed to increase output without adding manned shifts, and wanted to automate less-specialized tasks so that employees could be moved to higher-value roles such as setting up CNC machines and spending more time on inspection and quality.

The company’s first collaborative automation project used a UR10e cobot and its built-in palletizing function to pick parts from an organized tray to feed a gantry system for the CNC machine that performs threading, drilling, and other operations. It took an employee about an hour to load the ordered grid on the tray, and the cobot could run for about 8 hours unmanned, but the company needed a system that could run all night without an operator. NEU vice president Brent Petit explored vibratory systems, but they couldn’t meet NEU’s repeatability requirements. That’s when he was introduced to ActiNav.

“The advantages of the ActiNav system is that we can just bring a bin right over to the machine, set it up, and it will start picking right from the bin,” says Petit. “We don’t need to have an employee standing there, picking up the parts and placing them into that pallet system that we were doing beforehand.”

During day shifts, employees can quickly refill the bin as needed, then return to other tasks. At the end of the day, workers simply bring a full bin to the ActiNav system, check the standard, set it to run, and leave for the night. The bin holds enough parts to keep the robot and CNC machine running unmanned all night long, and employees return in the morning to bins of finished product. They inspect the last part off the machine and take the finished bin to inventory, refill the raw parts bin, and let the robot keep running.

“The ActiNav system has a big bin with enough parts that fit in that bin where we don’t have to worry about it stopping. It can run all through the night. We come back to finished parts, and it’s a beautiful thing.”
Andrew Lieffers NEU Operations Manager 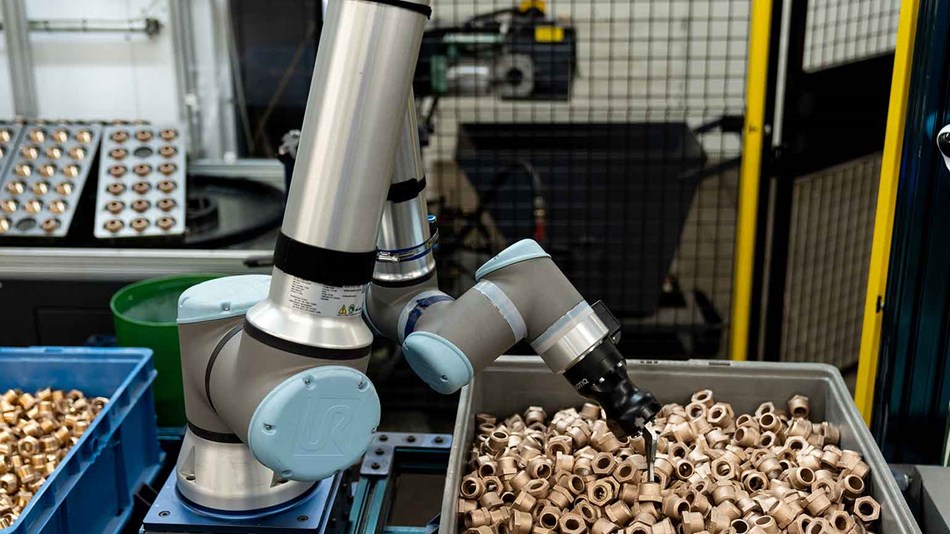 ActiNav system with UR10e cobot autonomously picks parts from a deep bin to load a gantry system that is the staging for a CNC machine for further operations such as threading or drilling. 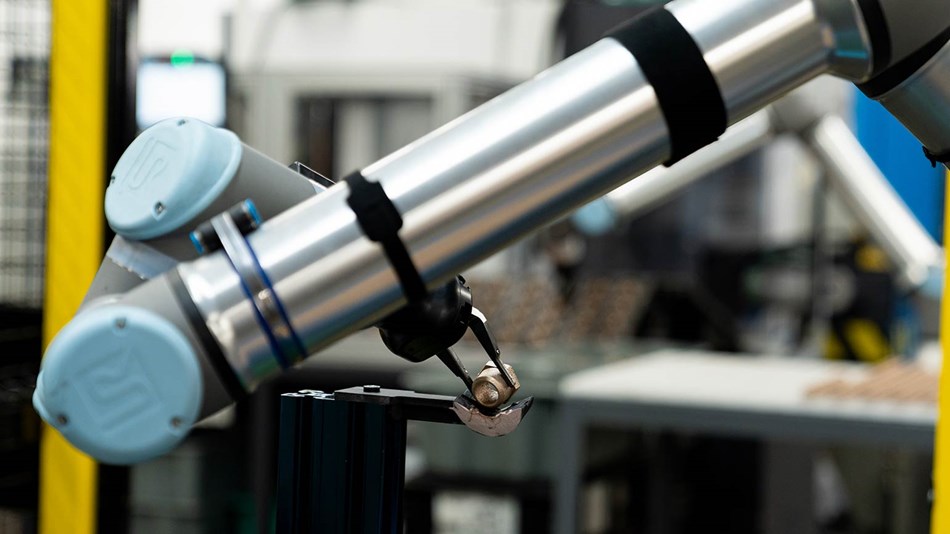 ActiNav system places raw part into regrip fixture and cobot activates the fixture to vibrate the part so it’s perfectly lined up to load into the gantry system. 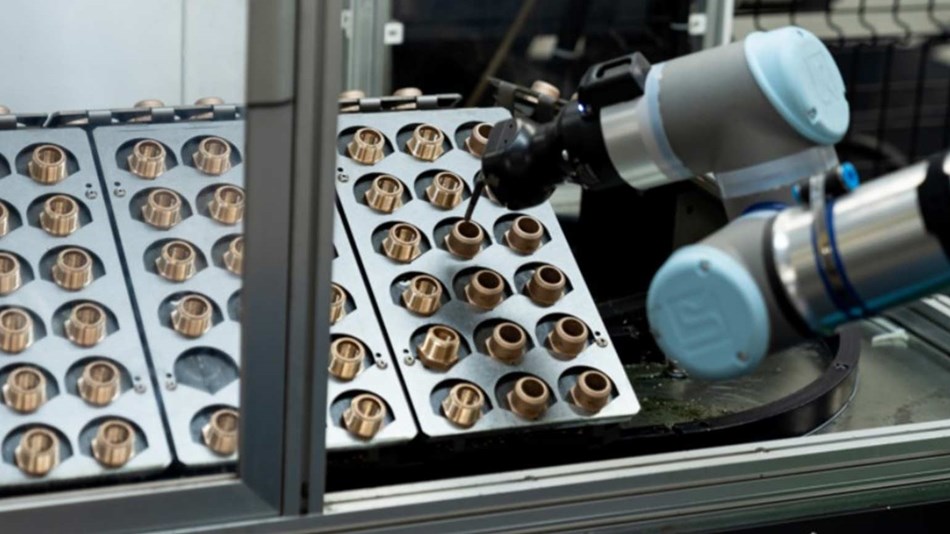 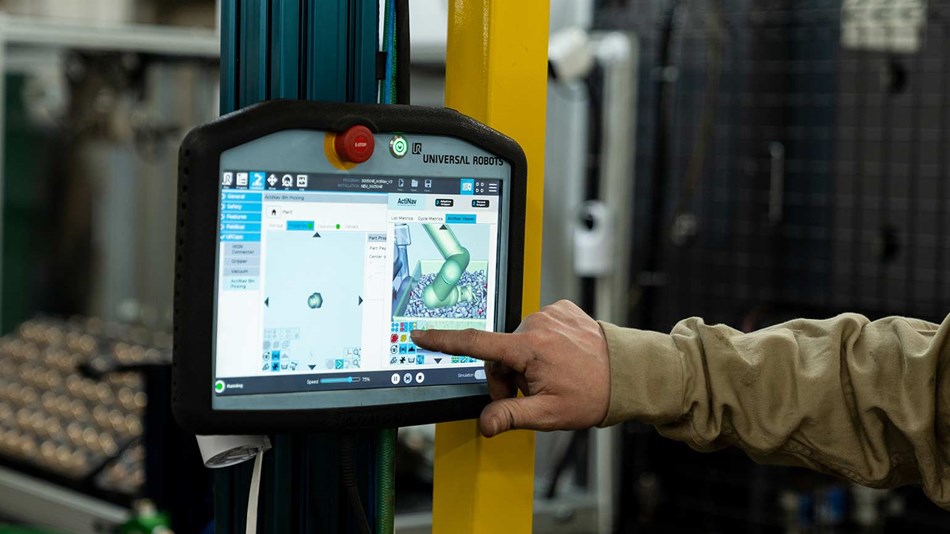 ActiNav is a UR+ Application Kit with intuitive programming using the cobot teach pendant. 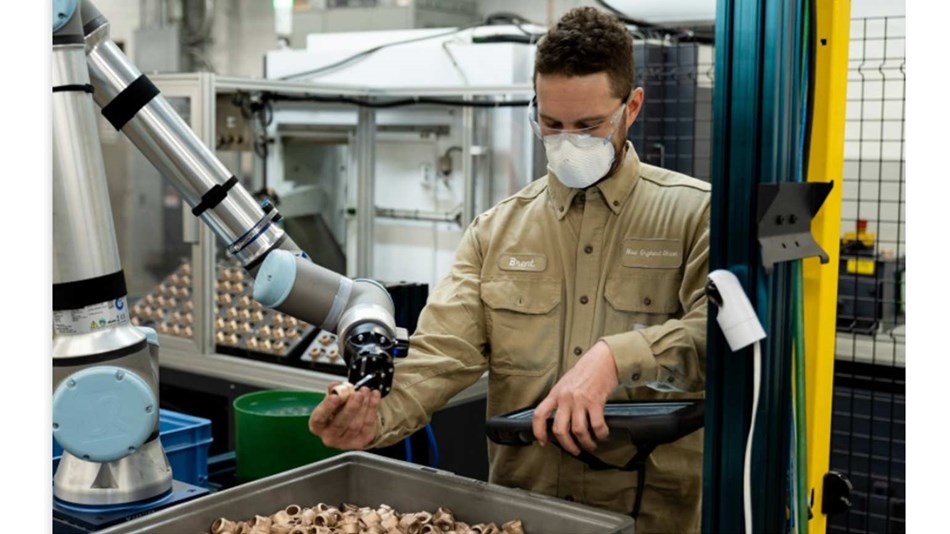 Teaching ActiNav involves simply downloading a step file into the cobot’s teach pendant, scanning the parts and setting clearance shapes, then teaching pick and place rules for the gantry system and regrip fixture. 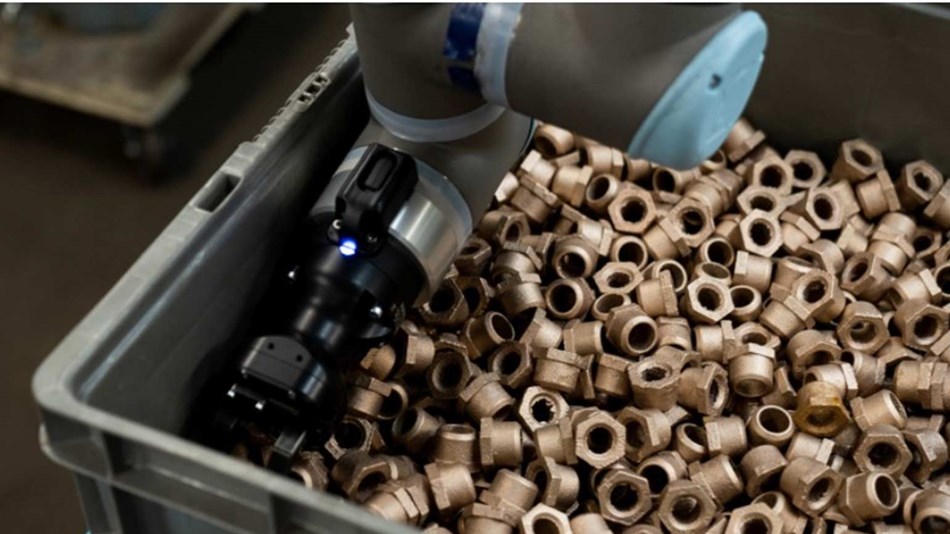 ActiNav can accurately pick parts even from deep bins without colliding with the side of the bin. External pick uses a force-feedback function within the ActiNav system to sense if the gripper is pushing too hard to access a part and trigger the robot to move to another pick as appropriate.

The ActiNav system first performs a 3-D scan of the bin then the UR-10e cobot picks a raw part and places it onto a regrip fixture. The UR robot activates the fixture to vibrate the part so it’s perfectly lined up to load into the gantry system that is the staging system for the CNC machine. At a signal from the machine, the robot picks a finished part from the gantry system, dunks it in water to rinse off the coolant, and drops the part into a finish pan. Then the robot returns to the regrip fixture to pick the correctly oriented raw part and places it onto the gantry system to go into the CNC machine before starting the cycle again.

NEU is currently running ten different parts on the ActiNav system, with the goal of running more than 30 different parts. ActiNav will run 24 hours a day, five days a week, allowing NEU to increase output to meet demand, with the same number of employees.