Universal Robots implemented its UR5 robotic arm solution for Linaset, helping to improve productivity and efficiency, while relieving staff members of a particularly time and energy consuming production line task.

Supplying plastic mouldings to customers in the automotive and other industries, Linaset needed a safe, precise and efficient way to automate the component blasting stage of its process.

In the past, mouldings had been blasted manually on a worktable on both sides using a special blasting media – an operation that was both time and resource consuming when done completely manually.

As it was also necessary for the blast applicator to be held upright in a particularly dusty and noisy workplace, it was also a job that placed considerable physical demand on staff. All of this would need to be considered if a suitable automated solution was to be found.

Linaset installed the UR5 robot arm and put it to work in test mode less than one week after ordering. Situated in the existing workplace and equipped with a simple fastener for attaching the blast media applicator, it worked together with human operators placing the mouldings into the jigs and rotating them during the cycle so the robot could blast both sides.

The immediate effect was the amount of time required for processing one moulding was reduced by as much as 30%, increasing productivity while ensuring premium levels of precision and quality. When the blasting media needed to be refilled, the robot would detect the low supply and stop automatically.

Over a six-month period, running continuously 24 hours a day and seven days a week, Linaset did not record a single malfunction or period of unplanned downtime for the UR5. And, aside from regular maintenance and cleaning dust from the control unit, there was no need to perform any service work or change parts – despite the harsh environment.

According to Petr Šromota, major production manager at Linaset, the speed at which the robot became a flexible part of the manufacturing process was impressive. "There was no waiting time and within a few days, the robot was deployed at the workplace and began to operate reliably," he explains.

The UR5 was supplied by EXACTEC, who carried out the initial robot configuration and basic training, so employees could program and maintain the robot. Linaset now has a more productive process that is also more efficient - with consumption of blasting media reduced by 35%. 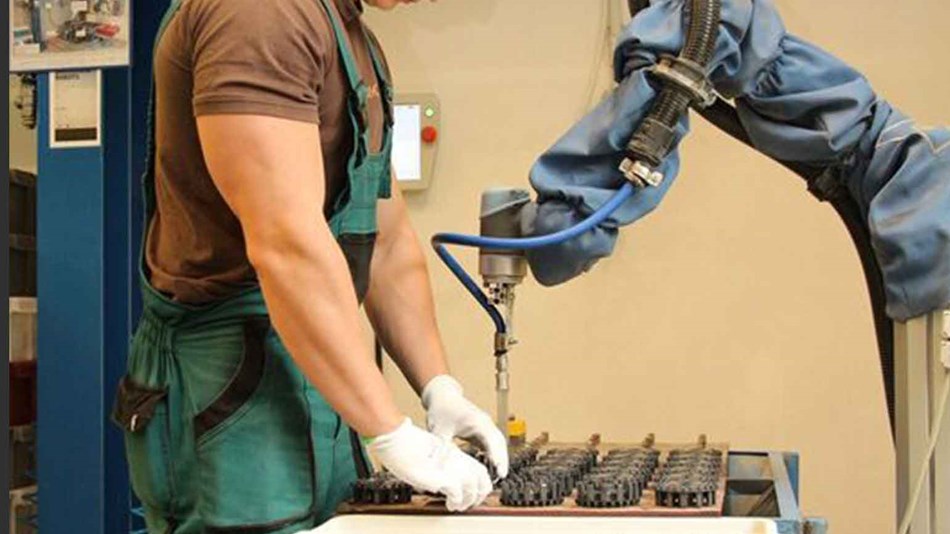