Universal Robots does the heavy lifting, freeing up 150 hours in four months at Danish printing company.

InPrint is a mid-sized printing company with 15 employees, and as a turn-key supplier of printed matter the printing company in central Jutland, Denmark, carries out a broad range of printing tasks. Production often involves heavy lifting and operator down time while the machines are printing. But since October 2016, the collaborative UR10 robot arm has reduced this significantly.

Søren H. Nielsen is responsible for large-format production at InPrint. He considered exactly where within production it would be most advantageous to introduce a collaborative robot:

“When working on large tasks for the company “Joe & The Juice”, for whom we print large format motifs, I realized that this was where it would make sense to have a collaborative robot; it takes four minutes to print a plate, and during these four minutes, our print operators have to wait until the machine gives a “beep”. Then the operator replaces the plate with a new one and waits again. I noticed that for the most part the operator just waited. 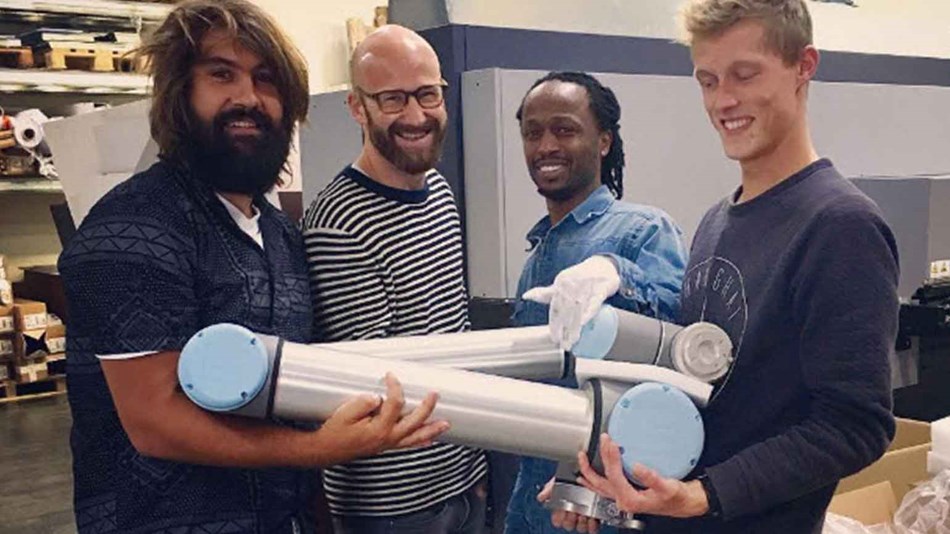 “With the UR10 robot, we are now competitive in areas that were previously beyond our capacity. Quite simply because we can now have the robot do the repetitive work of one employee, who now handles other tasks.”
Søren H. Nielsen Responsible for large-format production

In October 2016, Søren contacted BILA, the Danish distributor of UR Robots, inquiring about the price of the largest UR robot arm, as the task required a certain reach. The next day he ordered it – and within three days, the UR10 was delivered, programmed and integrated with the existing hardware. He describes the programming and interface as being logical and intuitive.

With a reach of up to 130 cm, UR10 is the largest robot that Universal Robots offers. It automates processes and manual tasks, where precision is crucial. And by using the integrated force mode, the robot arm can grab the plates and move them up to a facility in the printer so that they are precisely in place.

“Since December, we have produced 4,500 plates on one of the machines, where the robot handles the plates at an average speed of two minutes, freeing up a total capacity of 150 labor hours, saving approximately DKK 45,000 due to released time alone,” says Nielsen.

04 the work environment with cobots

The employees’ skepticism quickly changed to enthusiasm when they experienced the robot arm in action. The UR10 has reduced wait time and made production more efficient. According to Søren H. Nielsen it has also led to fewer overtime hours. All in all, the working environment has improved significantly thanks to the robot from Universal Robots:

“Standing by a machine waiting for it to say “beep” can drive you crazy. The person who used to wait for the machine now takes care of other important tasks.”

The improved working environment and more efficient production isn’t the only advantage that the UR10 has to offer. Søren H. Nielsen also says that due to the robot’s helping hand, the printing company can now take care of tasks that it previously couldn’t pay to take on – first and foremost digital tasks with very large print runs.

“With the UR10 robot, we are now competitive in areas that were previously beyond our capacity. Quite simply because we can now have the robot do the repetitive work of one employee, who now handles other tasks.”