By using a robot arm from Universal Robots for palletizing packed cable junction boxes, the medium-sized company optimizes the capacity utilization of its assembly facilities and frees employees from significant physical strain.

In the production of cable junction boxes, an enormous number of man-hours were required every day for palletizing package units. Gustav Hensel GmbH und Co wanted to automate this last step in the production process to increase efficiency and deploy skilled labour for more value-adding tasks.

The company needed constant direct access to the palletizing robot so a traditional industrial robot requiring safety guarding was not an option. The packaging line also required a specific combination of reach and payload capacity.

"Our goal was not to replace employees, but to create more capacity for higher-quality tasks. In terms of our lean concept, the manual packing and bundling of the cartons was absolutely not value-adding," explains Christoph Kaiser, Head of Plastics Manufacturing. 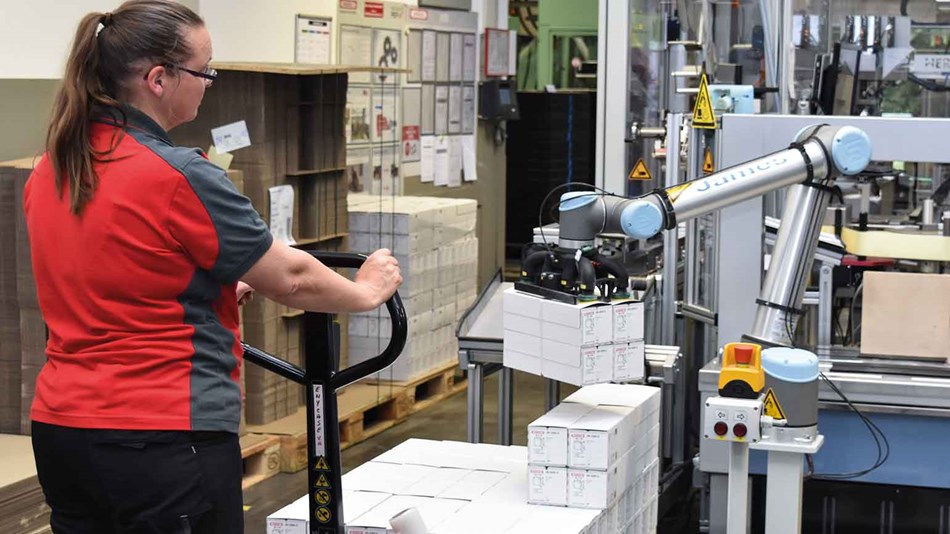 While the UR10 lifts approximately 2.5 tons per shift, the employees only have to move the full euro pallets. 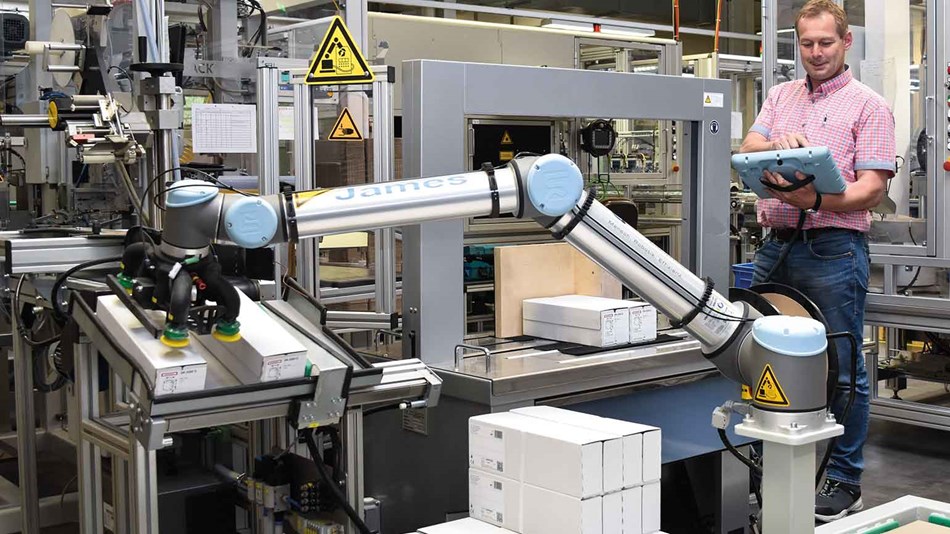 “Here at Hensel we strongly identify with the innovative strength of the company. In this context, we are very proud to work with collaborating robots. Universal Robots' technology is an absolute job security.”
Christoph Kaiser Head of Plastics Manufacturing

Together with the UR partner Dahl Automation GmbH, Hensel implemented a UR10 for palletizing. After only five days of setup time it was ready for use. Since, the robot works in two-shift operation as the last component of a fully automated system consisting of assembly and packaging machines to produce cable junction boxes.

It palletizes around 1.200 package units per 8-hour shift. To do so, the system provides the robot arm with the packaged products in two cartons at a time. Equipped with a vacuum gripper individually designed by Dahl Automation, the UR10 lifts the two packages and places them in a strapping machine. After placing another pair of packages there for bundling into a unit of four, the machine straps them. The robot arm then stacks the carton bundles on a euro pallet.

Additionally, the UR10 can be reprogrammed for different package sizes in less than three minutes with just a few clicks. Due to that, it is able to move four different carton sizes as required.

In everyday production, two shift workers interact with the UR robot – among them Lydia Reichling, who explains: "Thanks to modern production methods such as automation, our daily work has physically become much easier but also more demanding. I really like that." The high user-friendliness of Universal Robots contributes to the satisfaction of the employees. Kaiser adds: "The ease of operation compared to other automated systems is impressive."

While the UR10 is constantly palletizing, the employees have more time to optimize the assembly systems themselves, which increases overall productivity in the manufacturing of cable junction boxes.