The Miami startup Creating Revolutions was experiencing double-digit product reject rates in the assembly of their hospitality service pager. The UR3 cobot now handles soldering, drilling, silicone dispensing and light assembly while being controlled and monitored in a cloud-connected system, reducing rejects to near zero while increasing production efficiency almost five-fold.

Creating Revolutions makes a customer service paging system for the hospitality industry. The hockey puck sized Communication Disc connects guests with their waiter through their smart phone. Assembling the disc is a complex tasks requiring great accuracy and repeatability. "The problem is you can't efficiently repeat a specific process the exact same way over and over again as a human being," says Einar Rosenberg CEO of Creating Revolutions, who was on the lookout for an automation solution that could meet both quality and quantity requirements.
“We looked at about 40 different robot companies, and most of them didn’t have a very good way to program them; they required too many things for the environment; or they were too big or too jerky,” says Rosenberg who concluded his research by choosing a collaborative UR3 robot from Universal Robots.

“The UR3 was elegant, it was fast and smooth. We knew it had the exact precision that we really wanted. Our project reject rate has gone from double digits to below 1%, our overhead is significantly reduced while the increase in our production is a high multiple,” says Rosenberg.

The UR3 handles two different cycles: first, the robot checks that the aluminum housing parts are lined correctly on a tray. The robot then picks up the part, places it into a clamp, picks up a silicone injector and aligns the silicone, then places an acrylic disc on top, before placing the assembled part back on the tray. Next step is drilling and soldering: The robot picks a disc with a copper base out of a dispenser, and places it into an optical laser sensor that aligns the disc, the robot then places the disk into a holder, affixing it by closing two clamps.

“The UR3 grabs a drill from the utility belt and performs a peck drilling process, because the acrylic shatters if you just force it. The robot is sensitive enough to basically pop it in until it makes a perfect hole,” says the Creating Revolutions CEO. With drilling complete, the UR3 grabs the soldering iron, adding three points of pre-soldering.

“Having the UR3 perform the pre-soldering has increased the efficiency of the process almost five-fold,” says Rosenberg. “The manual soldering process really required the operator to have three hands.”

“The UR3 was elegant, it was fast and smooth. We knew it had the exact precision that we really wanted. Our project reject rate has gone from double digits to below 1%, our overhead is significantly reduced while the increase in our production is a high multiple.”
Einar Rosenberg CEO 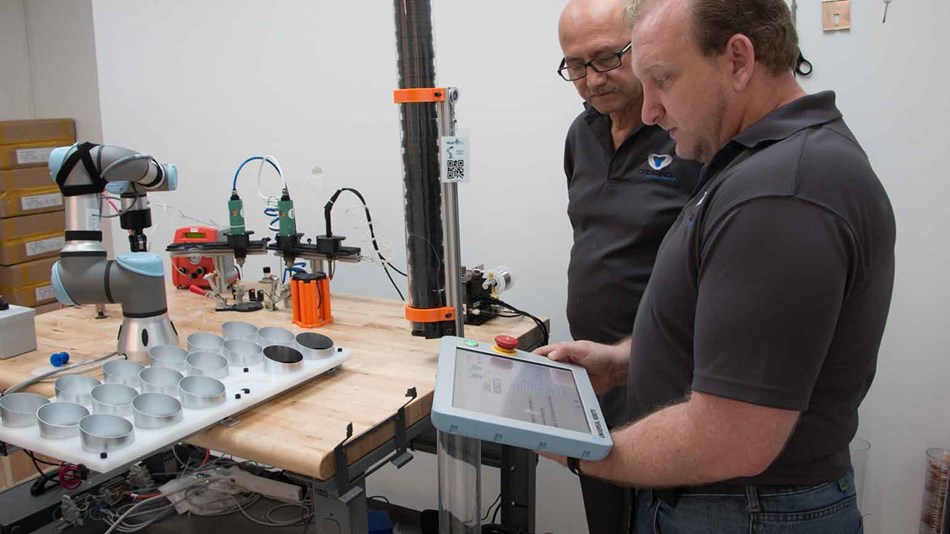 04 The benefits of the UR3 integration

The UR3 was integrated in Creating Revolutions’ assembly line by Hirebotics, a Universal Robots Certified System Integrator that works like a staffing agency for cobots, letting manufacturers rent cobots by the hour without any upfront costs. Hirebotics handles all programming, deployment and maintenance of the robot, while Creating Revolutions pays for only the hours it's operable.

It took just a few weeks from when Creating Revolutions first got in contact with Hirebotics until the UR3 was ordered, installed and programmed. Matt Bush, co-founder of Hirebotics, explains that in order to run a “robot staffing agency” quick deployment is imperative. “What has enabled us to do that is the ease of programming the UR robots. The UR interface makes it simple to get it up and running in production much faster than a lot of the other solutions we have worked with in the past,” says Bush, who also built a cloud-connected mobile app, enabling Creating Revolutions to receive real-time production data and notifications when the robot requires attention. “By gathering details on the number of units that the UR3 produces in a given period of time, we can combine all data and create realistic, very accurate forecasts of our production needs, such as how many humans are needed and what we need to focus on to produce at optimal levels,” says Rosenberg, who also has the UR3 work unassisted after hours.

Having a robot perform several assembly steps has become a huge selling point for Creating Revolutions.

“When our customers come here and see the UR3, they realize the quality and precision guaranteed because of the robot. Because we’re not an established company, they want to feel like the product that they’re going to be using is not going to fail on them,” he says. “The robot demonstrates to them a strength, which then reinforces the sale for us. “