Stacking trays, picking parts off conveyors, and tending machines are just some of the many tedious tasks AIM Processing now has the collaborative robots from Universal Robots (UR) handling. Facing labor shortages, the Colorado injection molder wanted a versatile automation solution that could quickly be moved between work stations to address a multitude of tasks in a high mix/low volume setting. The answer was a mobile platform with a UR5e cobot equipped with Flexx Reference, a feature that enables the cobot to be repurposed in a matter of minutes, delivering a fourfold increase in productivity with a payback of less than 15 weeks.

AIM Processing produces over 1300 different parts for more than 100 different customers in a variety of industries. “Every day is new here with very few production runs set up for a long time,” says owner Jon Gelston, who also faced an extremely scarce labor market.  “That really sparked us to look into automation, to find ways to increase our output and control our costs,” says Gelston, who started searching for a versatile and modular automation solution. His team had come across Universal Robots at a tradeshow a few years earlier. “It struck us as something that had potential to work in our environment,” says the AIM Processing owner, who went ahead and purchased a UR5e cobot.

What the walk-through revealed

“Once we got it up and running, it was a beautiful thing and we wanted to move the robot around between applications,” says Gelston. “The challenge, however, was next time we would go set it up and all the time we would need to spend to reteach the waypoints the robot moves through in free space,” he explains, emphasizing how accuracy to 0.5mm was necessary at some points. “It is one thing to get something working once, but without a dedicated production line and the UR5e locked into an exact position, how would we set this up again?”

One of the applications, for example, has the UR5e picking and placing trays in front of a cartesian robot that palletizes small parts into compartments on the tray. The company couldn’t simply launch a stored program used previously for the same application, since the position of the robot could still be slightly off - causing the whole application to be out of sync.

FILL OUT THE FORM AND GET IN CONTACT WITH OUR EXPERTS TODAY.

The company called up Seth Leinbach, sales engineer with local UR cobot distributor, In-Position Technologies, who did a factory walk-through with Gelston. “We looked at several applications and none were high enough volume to justify a dedicated robot cell,” says Leinbach. “Jon also had plenty of questions on how to repurpose a robot and how to match coordinate systems of the UR to the injection molding machine, and right away I thought it was a perfect fit for a UR+ solution by Flexxbotics called the Flexx Reference.” 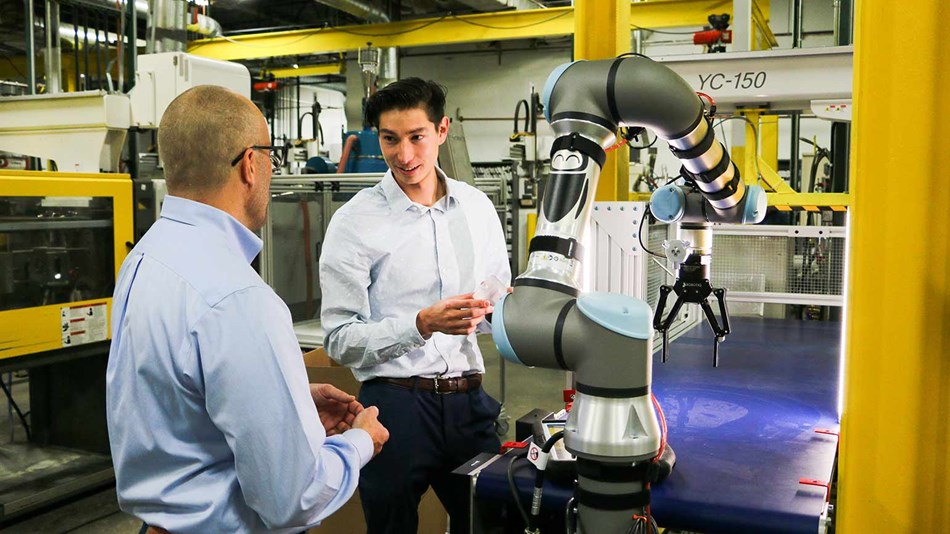 Seth Leinbach (left), is a sales engineer with In-Position Technologies, a UR cobot distributor local to the Colorado area. Based on the application input provided from Aim Processing owner Jon Gelston (right) recommended the UR5e cobot to automate multiple applications for the injection molder. 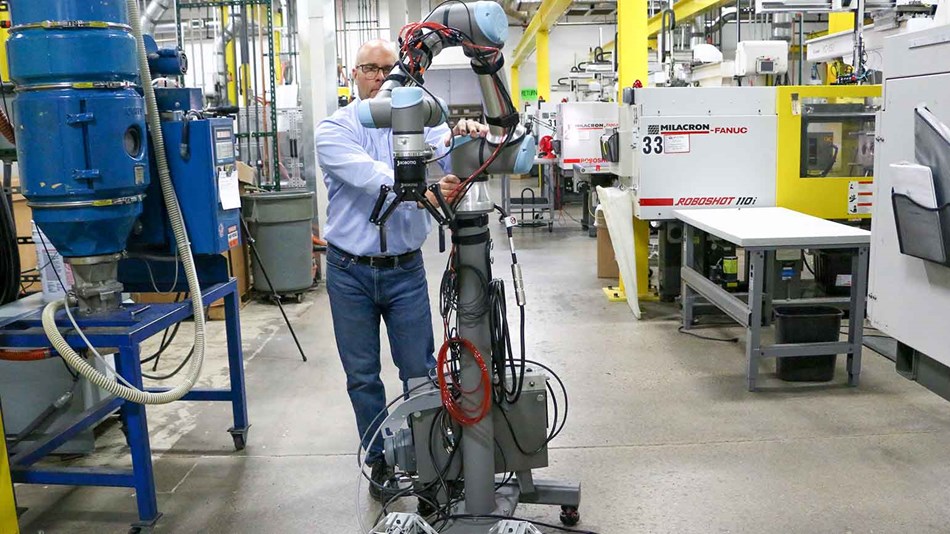 AIM Processing did not have any work cells with high enough production volume to justify fixed automation. This promoted the company to deploy the UR5e from Universal Robots; a versatile automation solution that they can quickly move around the factory floor where needed. 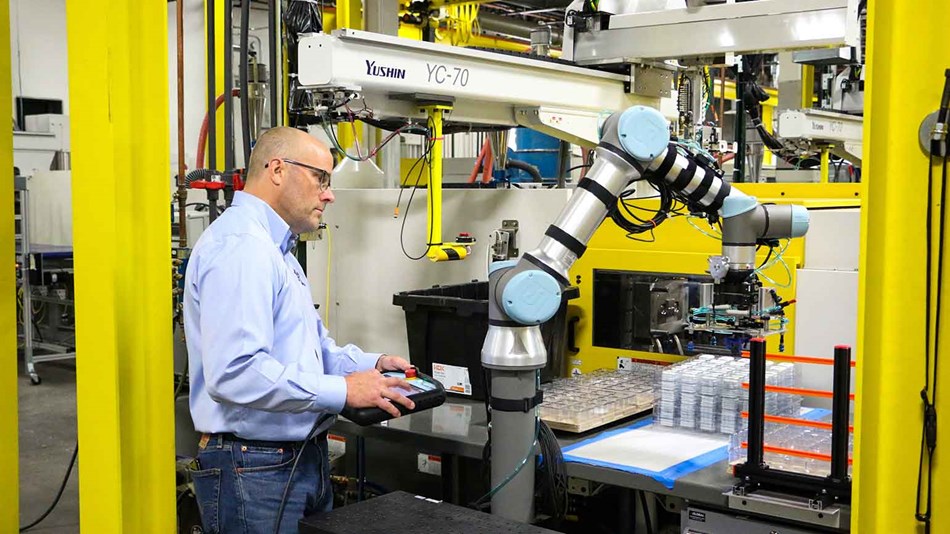 AIM Processing owner Jon Gelston had basic understanding of logic flow and programming prior to working with Universal Robots, “but very little direct experience with robot programming” as he puts it.

Since the company’s first cobot deployment, AIM Processing has launched more than a dozen specific applications, having the UR5e tend injection molding machines, stack trays, and pick parts off conveyors. The first goal was to automate the picking and placing of trays for the palletizing cartesian robot. Previously, this was an activity that occurred every 90 seconds with a person sitting and waiting to move the trays for a couple of seconds.

“The benefit of automating this task was not just the obvious labor avoidance. We can now run the machine with a much higher capacity and throughput in a 24/7 operation as opposed to just 40 hours a week. That basically gave us a fourfold increase in our output productivity,” says Gelston, adding that another benefit is consistency: “In terms of our part output, the cycle times are exactly the same, to the second, which leads to a consistent product.”

Jon Gelston is often asked how much he paid for the UR5e cobot – and more importantly, how quickly it will pay itself back. “My response is always that it’s not going to pay itself back if you don’t use it,” he says, stressing how the modular deployment really helped drive home the ROI:

“Part of the uncertainty with running a variety of different parts for varying durations makes it difficult in terms of trying to calculate payback; but what I can tell you is that on our very first application, we found that after we ran it the fifth time, we had paid for the robot itself, which meant a ROI inside of 15 weeks,” says the AIM Processing owner who just deployed a second UR5e to roam the factory floor wherever automation is needed.

The AIM Processing team had basic understanding of logic flow and programming prior to working with Universal Robots, “but very little direct experience with robot programming” as owner Jon Gelston puts it, emphasizing the resources he found through the free online portion of the UR Academy. “There were self-training modules in both video and read-along formats that were very helpful for us to find and learn from in terms of applications and improvements in procedures that would benefit a variety of our applications,” he says admitting that; “Our first application was probably, by our standards now, not terribly complicated; but at the time, it did feel like it was. “By utilizing the resources that we found in the UR training database and support site, as well as the Universal Robots’ community of value-added resellers and add-on components, it really enabled that project to come to a great success,” says Gelston. 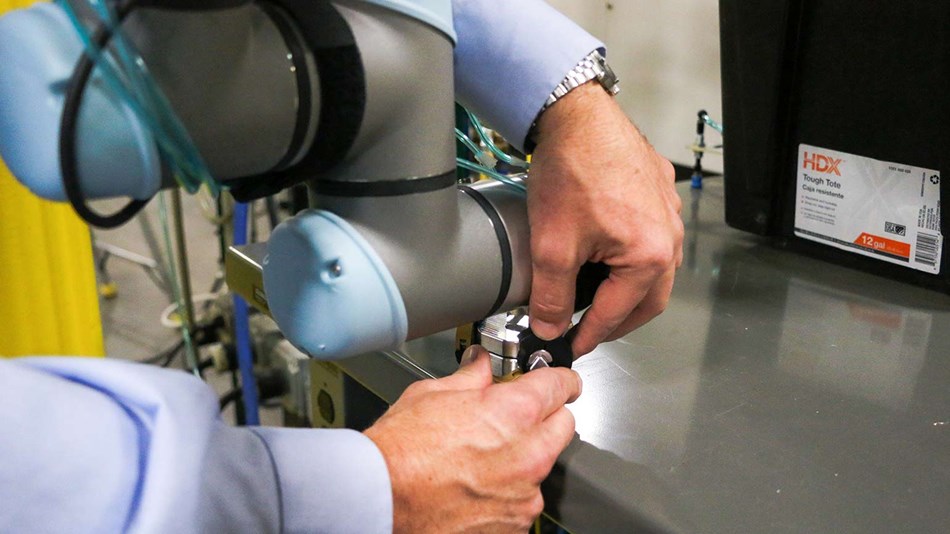 To make sure the cobot is positioned exactly the same every time it returns to an application, AIM Processing is using the Flexx Reference solution from Flexxbotics. When placing the cobot in Flexx Reference’s Lockout Assembly, a 6-degree mechanical mating system, the system captures the cobot’s coordinates with the click of a button in the Flexx Reference software on the cobot’s teach pendant. All the cobot’s programmed waypoints and moves in space are then updated relative to the captured position in the Lockout Assembly. The user can now unlock the cobot and start the program without having to reteach any positions. 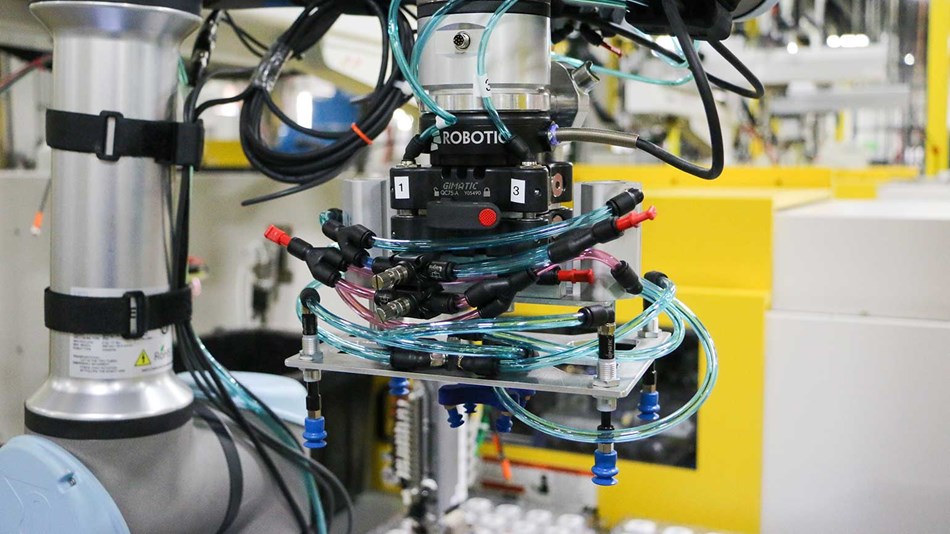 The UR5e handling the picking and placing of trays at AIM Processing is equipped with Robotiq’s Wrist Camera and a pneumatic gripper designed in-house. 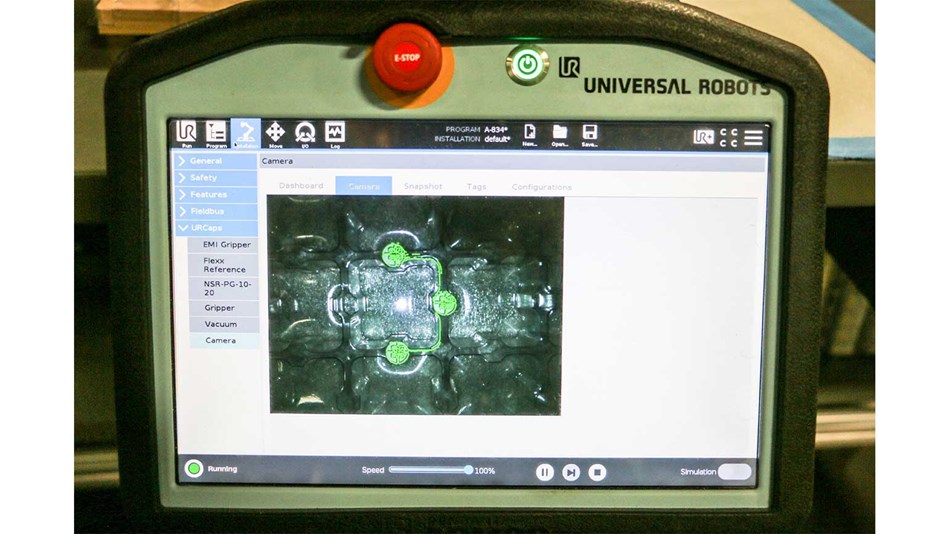 Robotiq’s Wrist Camera scans the QR codes on the trays that indicate what orientation they should be placed in, this info is communicated to the cobot that places the tray accordingly. 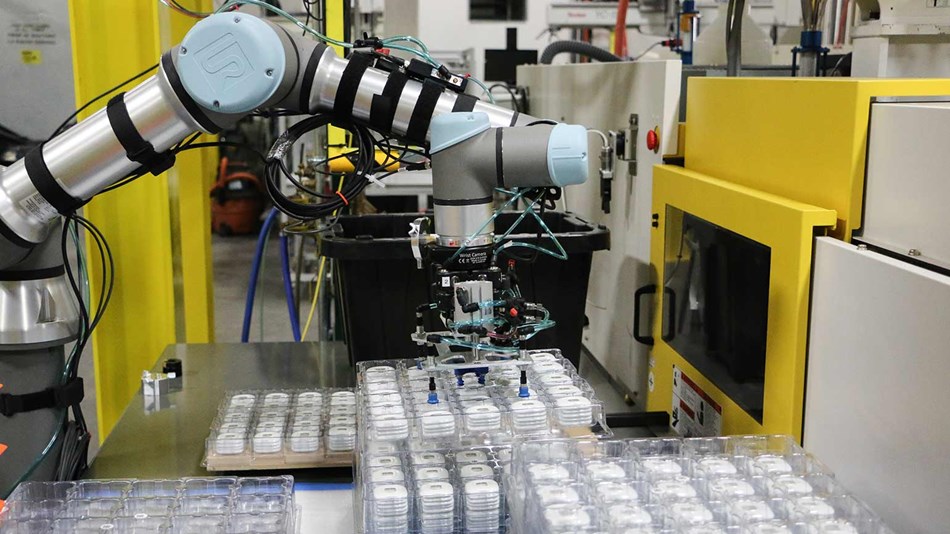 The cartesian robot picks the plastic parts in the injection molding machines and palletizes them into trays in a specific orientation. This requires the UR5e to place the trays with 0.5mm (0.0197in) accuracy. 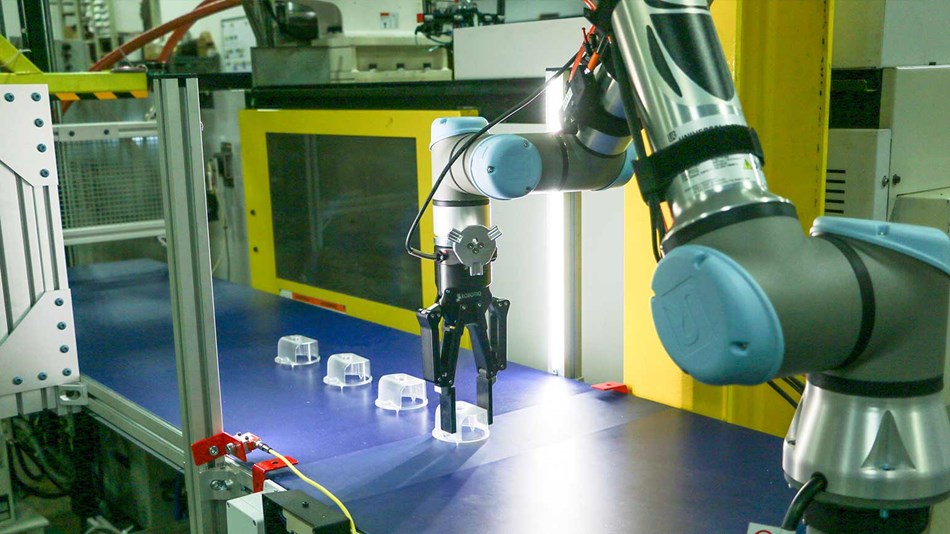 In the conveyor application, the UR5e is guided by the Wrist Camera from Robotiq to pick up the parts on the conveyor and place them in a box. The cobot also uses Robotiq’s 2F-140 gripper. All Robotiq products are certified through the UR+ program to be plug-and-play with UR cobots. 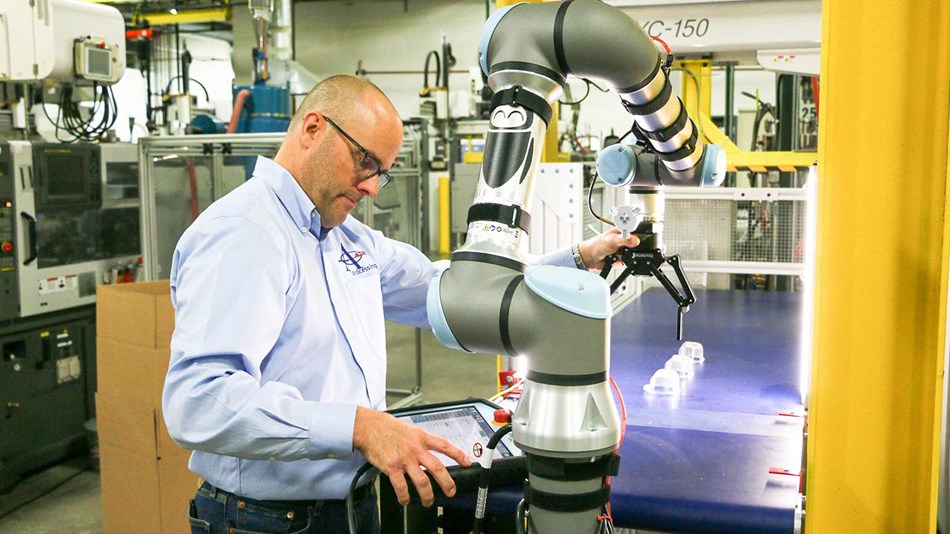 The conveyor’s proximity sensor alerts the UR5e when a part is ready to be picked, the entire cell is programmed through the UR cobot’s own controller by AIM Processing’s own in-house resources. 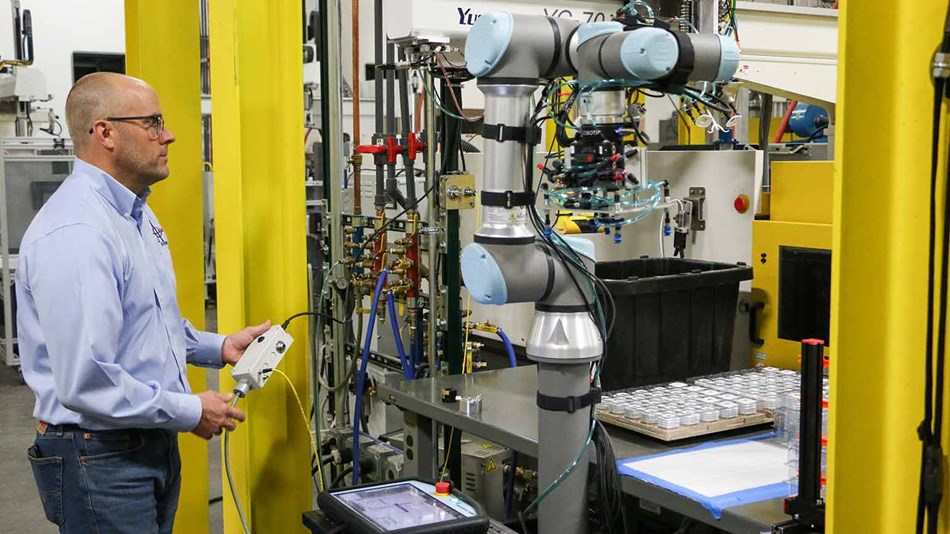 In order for the cartesian robot to communicate with the UR5e, indicating when a new tray needs to be placed on the table in front of it for palletizing, AIM Processing uses a gate-link relay box. “We have not found it necessary to use an external PLC, which eliminates complexity,” says owner of AIM Processing, Jon Gelston. “The two robots communicate through the existing 24-volt inputs and outputs in the UR5e through an interface gate-link we created.”

Freeing up the cobot with Flexx Reference

The add-on component critical to AIM Processing’s ability to easily move the UR5e around between applications is Flexxbotics’ Flexx Reference, that enabled AIM Processing to redeploy the UR5e while still achieving the desired repeatability. “We tore down a running configuration, moved it, and set it up again,” explains Gelston. “We moved the cobot just an inch, locked it and updated the Flexx Reference. It worked; accurate to 0.5mm and it took just 2 minutes. Everything just fell into place,” says the AIM Processing owner, who besides the Flexxbotics solution also received recommendations from In-Position Technologies on grippers and vision cameras from Robotiq.

Plug-and-play with UR cobots

All these components are certified through the UR+ program to be plug-and-play with the UR cobots. “The installation of the UR+ components was incredibly easy,” explains Gelston. “The software, called a URCap, shows up on a flash drive that you plug directly into the cobot’s teach pendant, removing all of the technical details of making the cobot arm talk to the peripherals.” The URCaps now allow AIM Processing to program both Flexx Reference, and Robotiq’s vision camera and gripper directly through the cobot’s own teach pendant interface.

The “somebody nudged the robot” scenario

The success factors of the cobot deployment are not simply the concrete savings on labor. Many other more subtle benefits have emerged. “One of the real-world issues that you face is not only the setup of the robot and the redeployment, but the ‘somebody nudged the robot’ scenario,” says Gelston, explaining how workers would sometimes bump into the robot by mistake. “If it’s very slightly out of position, it messes everything up. Using the Flexx Reference allows us in just a couple of minutes to reteach that one position that may be causing all other positions to be out of place,” says the AIM Processing owner, comparing it to the several hours this repositioning could otherwise take. “Hours that our engineers can now spend on new development instead of being the ‘set-up person’. Any skill level can essentially execute a redeployment now,” he says.