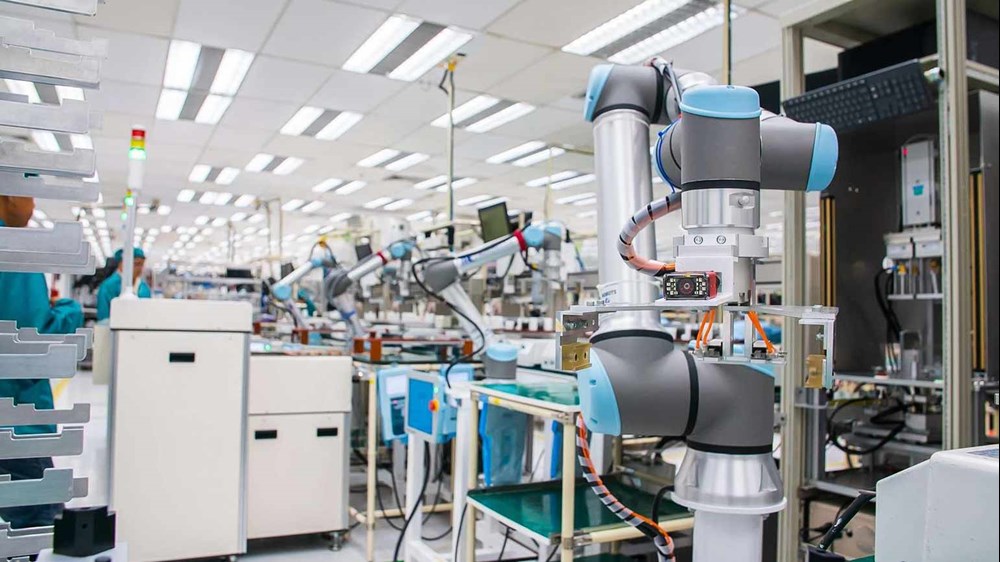 Universal Robots cobots are found at the heart of successful, real world electronics manufacturing deployments across the globe. Every implementation is unique, but the overall results are clear; boost in productivity, improved quality outcomes, reduced human error in repetitive tasks and enhanced working conditions.

This week’s blog explores how UR cobots have emerged as a powerful resource for electronics manufacturers facing critical business pain points such as unexpected spikes in demand, skilled labor shortages, high mix/low volume production and lack of available floorspace in manufacturing facilities. 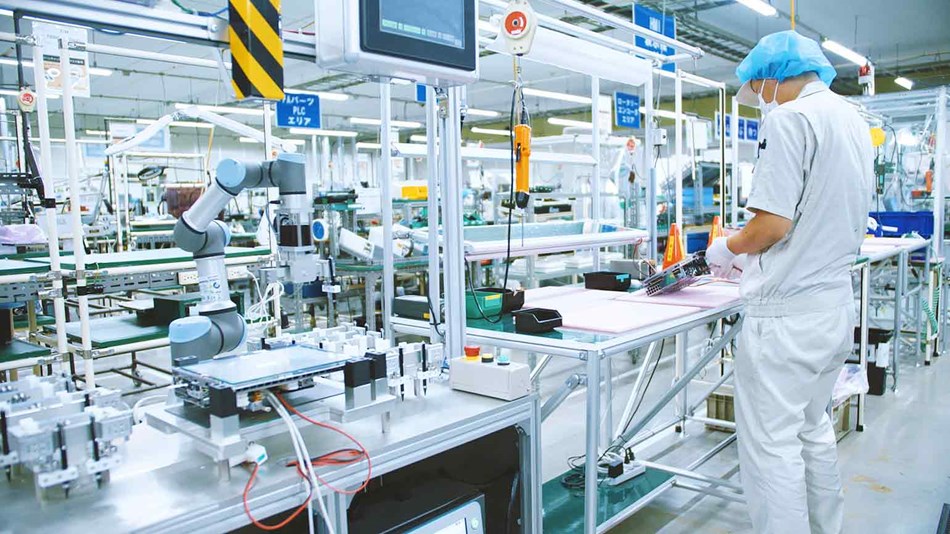 Automating a repetitive touchscreen testing process with a UR3 cobot enabled KOYO ELECTRONICS INDUSTRIES CO., LTD. to increase productivity by 31%.

When KOYO ELECTRONICS INDUSTRIES CO., LTD. experienced a surge in demand for its in-car touch panels, the manufacturer responded by reallocating workers away from manual post-production inspection tasks to address bottlenecks elsewhere. It was a decision that eventually led to skilled labor shortages on repetitive, end of line touch panel testing processes.

KOYO needed to deploy automation that can handle the range of forces suited to touchscreen inspection applications, can be deployed safely beside humans without the need for safety fencing and all in a compact form to avoid significant changes to existing lines. The company chose a Universal Robots UR3 cobot, which comes with built-in adjustable force mode capabilities, numerous safety features designed to enable safe human-robot collaboration, and a space-saving footprint.

The end results are superb: The UR3 deployment increased productivity at KOYO by 31%. The number of people required to handle touch panel inspection tasks was halved from two to one, freeing workers to focus on more ergonomic, higher value tasks, including cobot operation. And ROI was achieved in just twelve months.

When the UR3 touches the touch panel with a stylus and no errors are found, an “OK” message is displayed, and the green signal tower light is activated. If an abnormality is detected, an “NG” is displayed and the red signal tower is activated along with a continuous buzzer sound. As a result, the person in charge is immediately alerted to the abnormality and can respond.

“Not only has our company been able to improve productivity by allocating resources to another production process, but the experience from implementing this robot has built confidence and high hopes for future development.”
Mr. Katsuhiko Nakatani Deputy General Manager of the Production Department KOYO ELECTRONICS INDUSTRIES CO., LTD.

See how Melecs EWS realized a 25% growth in packaging productivity by deploying a UR5 cobot.

To keep pace with massive growth in demand for its products, Melecs EWS sought ways to automate end of line packing processes for its line of small, round printed circuit boards (PCBs). Requiring manual, three-shift operation, packing was a monotonous task that had to be completed within a 5-6 second timeframe per module. Attracted by the affordability and accessibility of UR cobots, Melecs deployed a UR5 cobot to take over these unergonomic tasks.

Two million components packed with no error, keeping up with strict cycle times

The end result? Melecs increased throughput in its packaging operations by 25%, eliminated production bottlenecks, and freed workers from unergonomic, time consuming tasks. The cobot packs around two million components a year without error, despite having to operate on strict cycle times.

A worker places a group of printed circuit boards in the working area of the UR5. The cobot then scans three boards using laser scanners. The cobots’ three customized flow grippers pick one board each and then place all three boards simultaneously in a tray. When the tray is fully loaded, the cobot packs it into a box using a vacuum gripper. When the box is filled, the cobot closes the lid.

“The robot runs absolutely stable in three-shift operation and we assume that it will pay itself off within 18 months. The UR cobots are an excellent addition to our automation strategy and we will definitely include them in future projects as well.”
Georg Loisel VP Production System, Melecs EWS 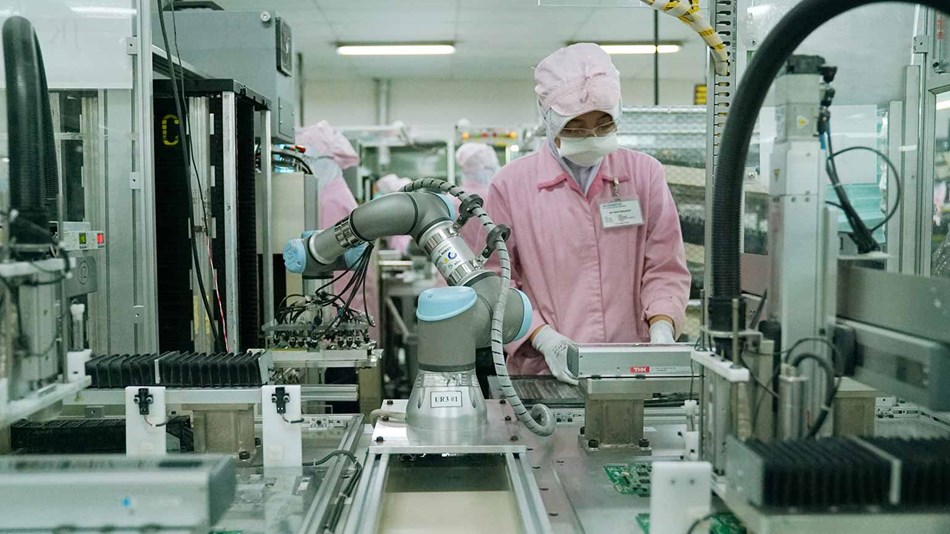 Thanks to the UR3’s small footprint and built-in safety features, JEIN was able to deploy automation with minimal disruption to existing lines.

Impressed by the versatility of UR’s cobot platform, which can be fitted with a variety of end-effectors suited to different tasks, the company ended up deploying seven UR3 cobots on its electronics production lines –on applications including screwdriving to soldering to pick and place.

JEIN uses its cobots to handle repetitive and unergonomic tasks, such as separating cut pieces of Printed Circuit Board and attaching glass displays to car stereo units. Each deployment frees workers to focus on higher value tasks, while simultaneously improving consistency and reducing the time per task by half.

“Through the adoption of cobots, we were able to improve production efficiency and our output quality is now more stable. With the move towards automation, our manpower can be redeployed to other processes. We have been able to reduce operational costs by more than USD 80,000 yearly.”
Agustinus P. Simanullang General Manager, Engineering Division at JEIN 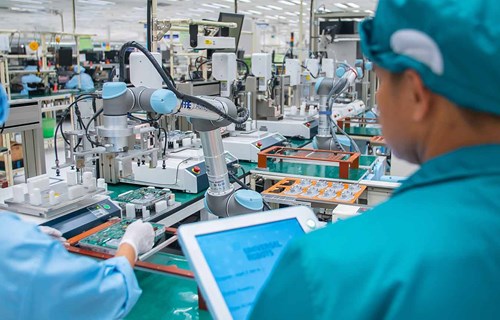 In sectors defined by constant change, manufacturers who can quickly adapt to new economic and technological realities can both avoid complacency in good times and ensure survival through difficult times. These days, those companies are often doing it with the help of collaborative automation. 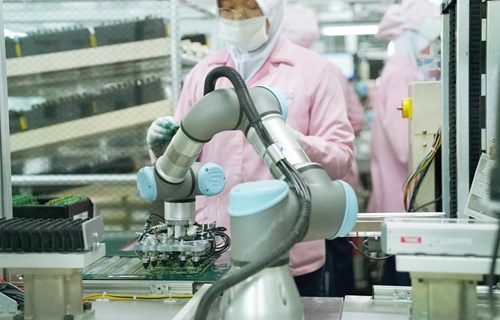 Your Questions Answered on Cobots in Electronics Manufacturing