The results of this year’s IFR report was announced at a press conference at the World Robot Summit in Tokyo.

The World Robotics Report which is published every year by the International Federation of Robotics (IFR) was presented during a press conference held by the IFR at the bi-annual World Robot Summit which currently takes place in Tokyo.

Some of the main findings show that the investments in industrial robots keep increasing. In fact, the global industrial robot sales more then doubled from 2013 to 2017 (114%) and the outlook for this year and the next three years (2018-2021) estimates that the global sales will increase 14% per year on average. 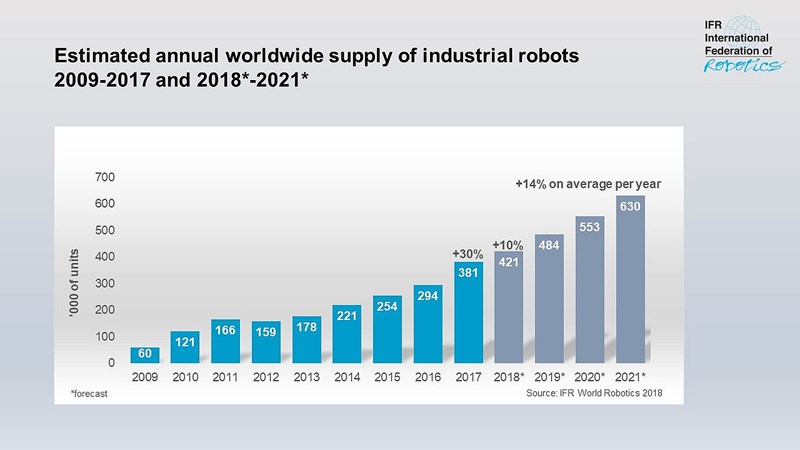 “As with previous reports from IFR, the findings this year is in line with our own experiences at Universal Robots. We also see a significant interest and desire to automate processes and more and more companies – no matter the size – are realizing the benefits of robots in their manufacturing setups,” says Esben Østergaard, Co-founder and CTO at Universal Robots.

In the 2018 report the IFR highlights many cutting-edge technologies such as the concept of man-machine collaboration and easy programming which will help improve the productivity of manufacturing and expand the area of robot applications.

“Robotic automation improves consistency of quality and consistency of flow. Collaborative robots – in its essence man-machine collaboration – are especially compelling as they work together with human workers instead of replacing them. We definitely see an accelerating demand for consumer goods that display an element of “the human touch” along with consistently high quality,” says Esben Østergaard.

Universal Robots has always believed in easy programming which is one of the reasons the company is market leader within collaborative robots today.

“Making it easy to understand and program our cobots has been a part of our DNA since the very beginning. We actually define “collaborative” by the ease-of-use and ease of integration. That is what really sets us apart from our competitors and I’m pleased that IFR highlights that as cutting-edge as I couldn’t agree more,” continues Esben Østergaard.

The report sees a growing demand for robotic automation specifically within the auto industry, electronics, and the metal industry. Five major markets; China, Japan, South Korea, the United States and Germany represented 73% of the total sales volume in 2017 which corresponds with Universal Robots’ experience as key markets.