Toolcraft, a small machine shop in Seattle, Washington, was immediately won over by the 30 micron repeatability and built-in force/torque sensing in Universal Robots’ new flagship line of cobots. The company needed to automate a challenging, three-operation machine tending task inside its CNC machine and has now saved 23 percent on production costs and increased throughput 43 percent by using the UR5e cobot.

Toolcraft was at a crossroad when a large order prompted the company to add a third shift for 24/7 production. “Nobody wants to run on third shift around here. When you put an ad out, you’re not getting very many responses,” says Steve Wittenberg, director of operations at Toolcraft, who finds himself in an area with three percent unemployment. Toolcraft started looking at different automation options, initially considering traditional industrial robots.

“If we looked at just the robot hardware alone, that appeared to be a more cost-effective solution,” he says. “But once we started factoring in the savings on not having to erect a safety cage – and the time saved on the ease of use, avoiding a lot of complex programming – Universal Robots ended up being the right solution.”

The order Toolcraft had to complete was a multi-threaded part for a medical device that needed to be loaded into a three-step CNC machining operation. Toolcraft discussed the challenge with Rapid Design Solutions, a Certified Systems Integrator of Universal Robots. “When you’re doing multi-op precision machining, the accuracy requirements go way up,” says owner Troy Ojalehto, emphasizing the increased accuracy of Universal Robots’ e-Series line of cobots. “When we heard that the repeatability of the UR5e was down to 30 microns, we were very excited,” he says. “That really competes in the same space as traditional industrial robots, so that was huge for us. I have not seen other cobots handling this level of precision with multi-op parts like this, with raw stock going in and completed precision parts coming out.”

Half a year into deploying the UR5e, Toolcraft’s Wittenberg is quick to list the results. “Some of the benefits we’ve seen right off were a significant production increase,” he says. “We were able to staff that third shift and went from producing 255 parts a week to 370 parts per week. Along with that, we’re able to finish our year’s production seven weeks sooner, thus freeing up that machine to produce parts on other jobs.” He adds that costs have decreased by 23 percent, which means that Toolcraft is looking at an ROI on the UR5e at around 12 months. “We’re going to be able to be more competitive on a lot of the long-term work that we have.”

Acts like a human operator
Another new feature in Universal Robots’ new flagship line of cobots is force feedback in all the joints, which is key to making the part fit tightly into the CNC fixturing. “Using the force motion with freedom in the X,Y and rotational Z axes, we can force the part in there, and wiggle it, and program that compliance very easily to enable basically a human touch with the robot.

The machining cycle lasts 56 minutes with the UR5e only busy tending parts for 6 minutes of this. “The rest of the time, the cobot was just hanging out waiting for the next cycle. We wanted to keep it busy,” says Wittenberg, explaining how the company added a part rinsing and cleaning station. As the UR5e takes the machined part out of the CNC, the cobot now dips the part into a rinsing solution then passes it through an air jet before finally placing the washed and dried part on a rack for shipping. The machine shop was also able to easily control the pneumatic fixture and door actuators through the UR5e I/O interfaces. “This greatly reduces the need for CNC wiring and preserves all the CNC’s standard safety functions,” explains Ojalehto.

While Toolcraft enlisted the assistance of a system integrator to get the initial application up and running, the machine shop was able to program and install the rinsing and drying station on their own. “What really enabled us to do this was all the free online support Universal Robots gives you,” says Wittenberg. “After our automation engineer took the online UR Academy, he spent a few hours with the integrator and was able to add that station to the cobot cycle with no external help otherwise.”

At first, Wittenberg feared that production would go down during the programming phase of the rinsing station as the UR5e would then be unable to handle its regular machine tending duties. The Toolcraft team discovered, however, that they could simply use Universal Robots’ simulator and program almost the entire addition to the cycle offline while the cobot kept working.

UR+ gripper speeds up integration
Another UR initiative that sped up integration is the UR+ program that certifies robot peripherals, such as grippers, vision systems, software and other accessories to work seamlessly with UR cobots. “For this application, we chose a Pneu-Connect pneumatic gripper,” says Ojalehto from Rapid Design Solutions. “A big factor is that it’s UR+ certified, which means it works with Universal right out of the box with all gripper software integrated directly on the UR teach pendant, eliminating the need to do any script coding.”

One cobot a year, automating horizontal mill is next
With the first successful cobot installation under its belt, Toolcraft is now planning to install one cobot per year. “The fact that our own automation engineer is now able to go in and troubleshoot anything that comes up is going to be key in us meeting this goal,” says Wittenberg, explaining that the next task to be automated on the shop floor is tending a horizontal mill. “That’s a potential challenge because of the mills using rotary tombstones that are swapped in and out of the milling machine, which creates some difficulties with fixturing. But we’re confident we can solve those using a Universal Robot and some innovation in fixturing.”

Fill out the form and we will call you

“When we heard that the repeatability of the UR5e was down to 30 microns, we were very excited. That really competes in the same space as traditional industrial robots, so that was huge for us.”
Troy Ojalehto Owner, Rapid Design Solutions 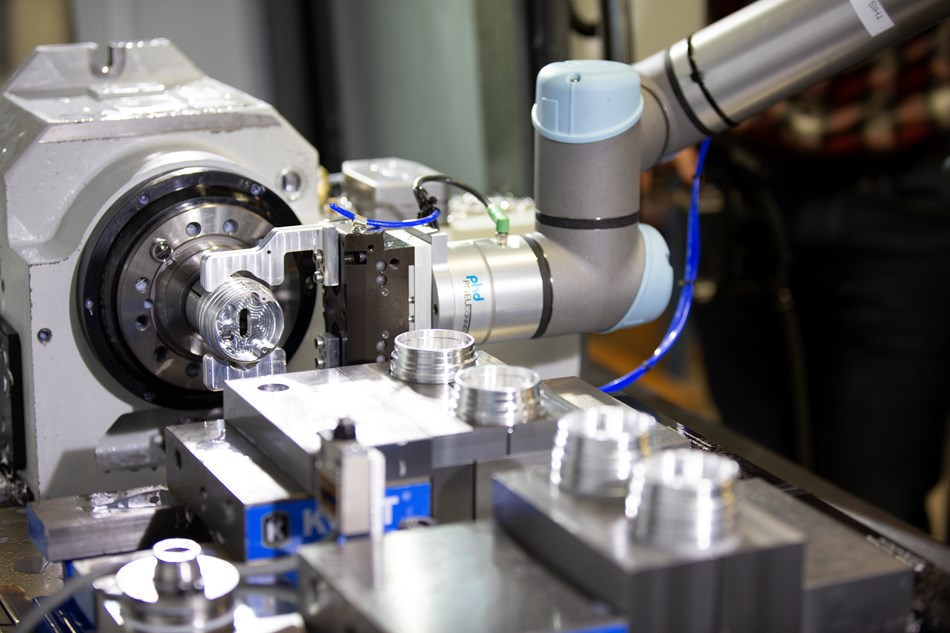 Featuring 30 micron repeatability, the UR5e was up to the task of handling the precise insertion of the multi-threaded part into the CNC fixturing. The CNC cycle includes three operations in a vertical mill, two in vise fixtures, and one in a 4th axis rotary unit. 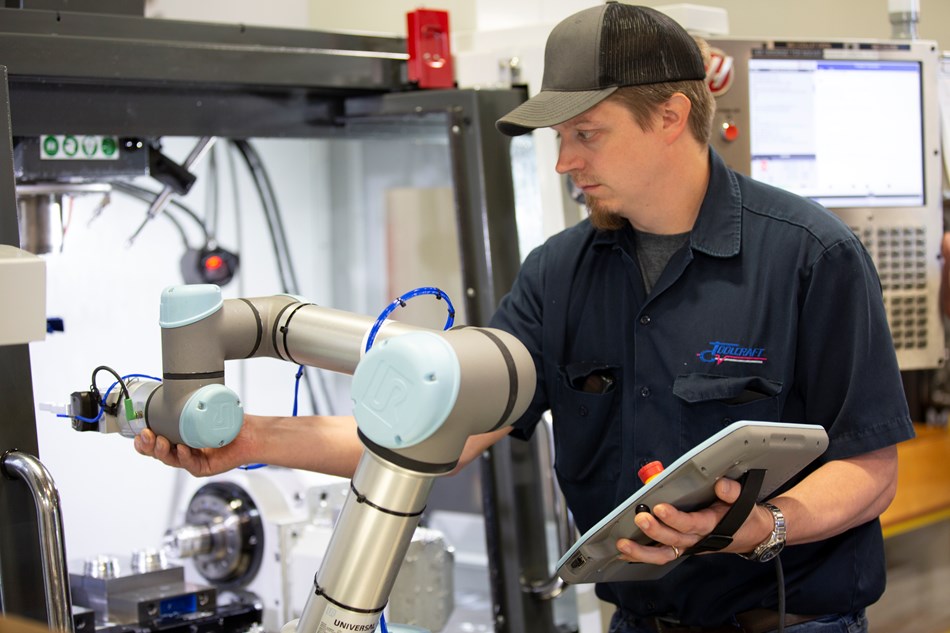 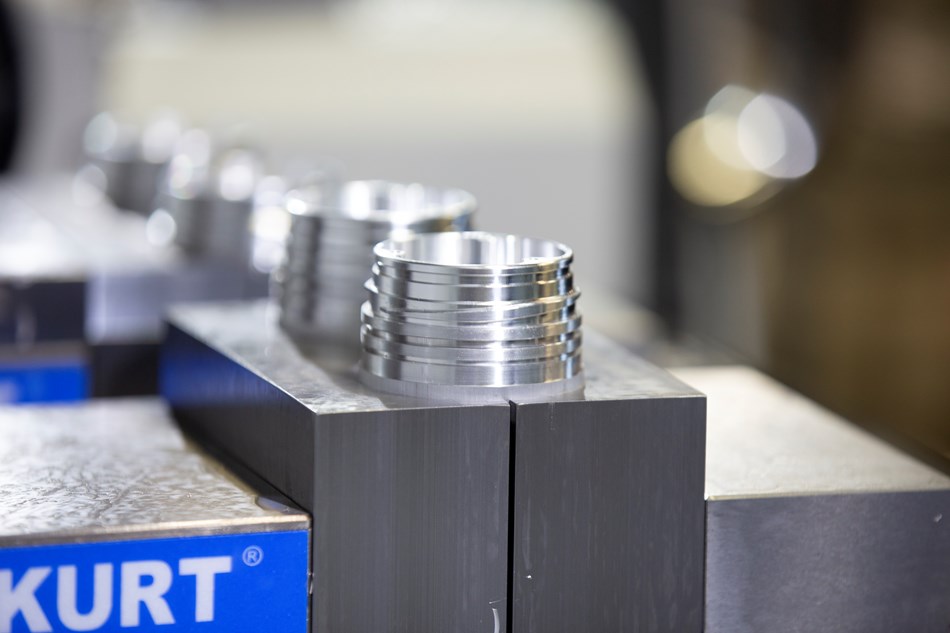 The parts produced in the CNC machining cycle tended by the UR5e is a multi-threaded medical device component, requiring high precision, three-step handling inside the CNC. 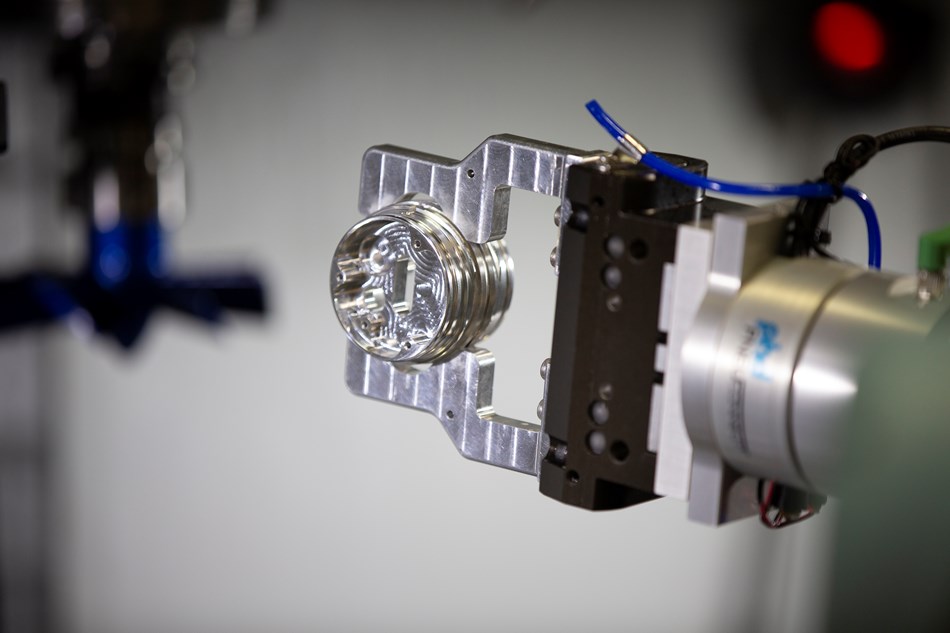 Toolcraft chose the UR+ certified gripper PneuConnect from PHD as end-of-arm-tooling for the UR5e. Being UR+ certified means the gripper is certified to work seamless with UR cobots with all programming software integrated directly on the UR cobot’s teach pendant. 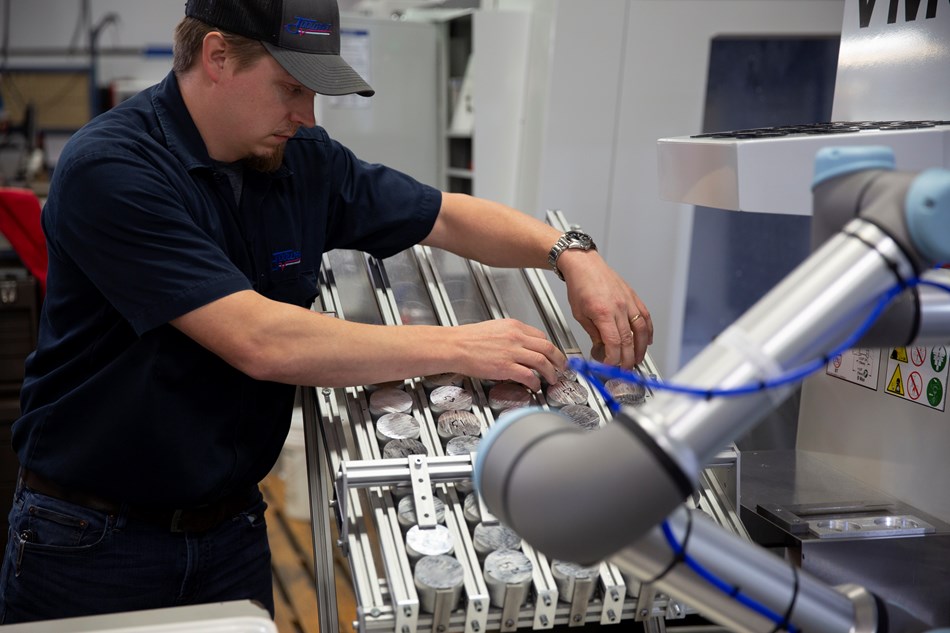 With the UR5e, Toolcraft was able to finish their annual production seven weeks sooner than with manual labor. 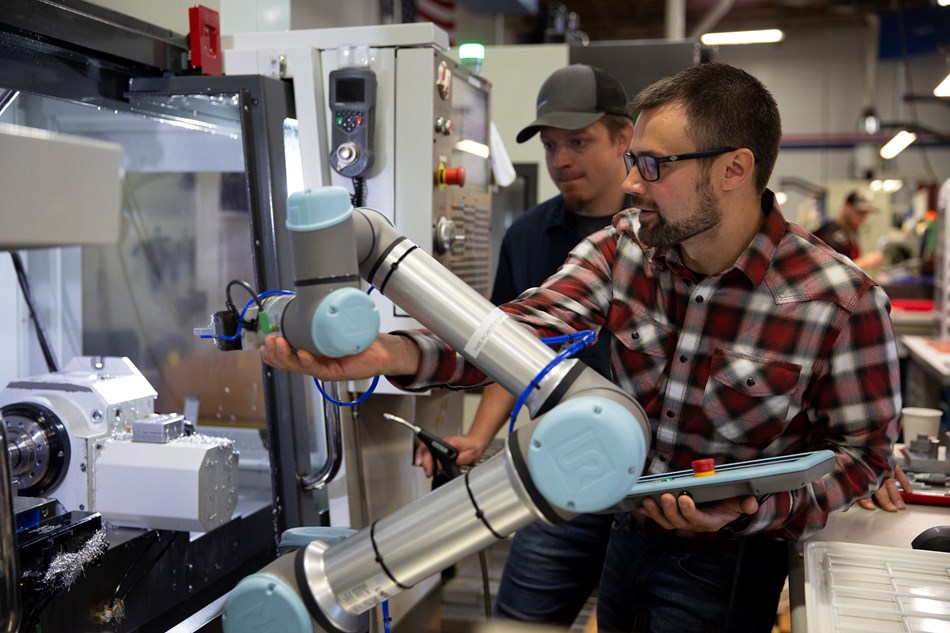 “The UR’s free-drive function greatly reduces the time to teach robot points,” says Troy Ojalehto, owner of Rapid Design Solutions. The UR cobots can easily be programmed through the ‘teach method’ by simply moving the arm through desired waypoints that are added to the program on the teach pendant. Using the UR simulator for programming, Toolcraft created the entire program for the parts rinsing and drying station offline, just inserting the waypoints as they transferred the program to the teach pendant. 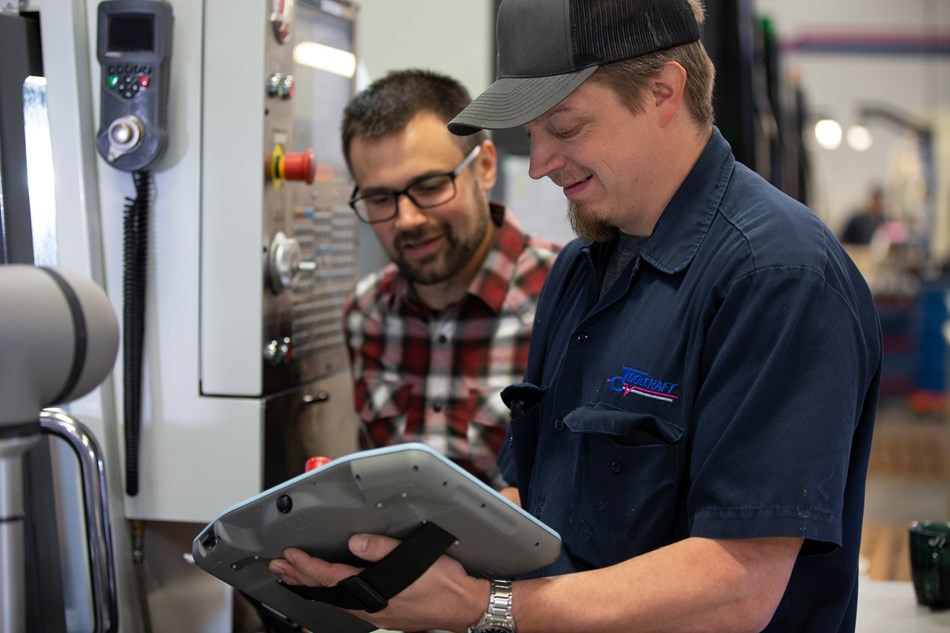 After Troy Ojalehto (left) at Rapid Design Solutions, a Certified Systems Integrator of Universal Robots, developed the initial application, Toolcraft’s automation engineer, Brian Laulainen (right), was able to handle the daily operation in addition to developing a parts rinsing and drying station as an application add-on for the UR5e. Laulainen did the training through the UR Academy, then supplemented with a few hours hands-on training with Ojalehto.