Bernacki Industrial Services, which was established in 2007, makes precision parts for production plants. It specializes in the production of machined components, such as valve bodies for plants and assembly lines throughout Europe. The company started its operations in the Technology Incubator in Jasionka, Poland. It currently has its own 800 m2 hall in the Special Economic Zone in Jasionka near Rzeszów, in the vicinity of the Podkarpackie Science and Technology Park Aeropolis and companies from the cluster Aviation Valley. Of the 11 CNC machines operating at Bernacki, as many as seven are adapted to operate with cobots. Three Universal Robots UR10e collaborative robots are deployed in three-shift operation at the machine park, increasing its efficiency and ensuring that the components are manufactured precisely. The choice of UR cobots was determined by the ease of programming, compatibility with the machines, their compact size, and safety of work. With the third UR10e the company achieved the fastest return on investment – 12 months.

The company started its production activities in 2015. It currently has around 80 customers from the hydraulic, sensors and pneumatic industry, manufactures on 11 CNC machines and employs around 20 people, increasing its turnover each year.

“We are a service company that produces components on CNC machines according to the designs provided by our customers. Each order takes an average of 80 hours to fulfill, after which the product range is changed. There are no two identical components – all orders should be treated individually, because the customer orders a different product to be manufactured every time,” says Nikodem Bernacki, General Manager of Bernacki Industrial Services.

Further improvements have resulted in one operator at the plant being responsible for an increasing number of machines. This was facilitated by organizational changes enabling productivity to be improved while maintaining safety standards. However, the opportunities to improve the system of work of the operators were limited and it became necessary to find a more flexible, safe and easy to reconfigure solution, taking into account the space in the hall and very stringent occupational safety and health regulations. Robotization was necessary to improve competitiveness of production at Bernacki Industrial Services.

As time passed, the factory managers came to the conclusion that the work which involved supplying production components to the machines, placing them in the machine and putting away the finished product after processing, could be automated with the use of collaborative robots.

Cobots from Universal Robots, supplied by the Polish distributor, ProCobot, with the Robotiq gripper that is available on the UR+ platform, were used for the automation. Bernacki started to introduce the first UR10e cobot in April 2019 and the machinery was equipped with further two cobots in the following months.

Each robot takes a component from a specially prepared pallet consisting of a pin grid, which enables the machine to correctly assess the position of the component and reliably pick each of them. The fingers of the robot gripper’s are 3D printed in-house, specifically designed to handle the components. After it is picked, the component to be machined is placed in the CNC.

The robot opens the door of the machine itself and places the component into the work space. In order to establish that the CNC is ready for successive operations, the cobot exchanges signals with the machine, making sure at the beginning that the machine is ready for insertion of the component to be machined into it. Communication between cobots and machines is carried out using the C-Interconector by CobotPlanet. The robot then precisely places the component in the spindle of the machine. The cobot gripper jaws, as well as its entire arm, have to move  with a tolerance of just 0.5 mm to accurately put the component in place. After receiving a signal confirming that the component is placed correctly in the machine, the cobot leaves the work space, closes the door and sends information to the CNC that it can start its task. When the machine starts to operate, the cobot waits for another signal to inform it that the task has ended.  It opens the door to the work space again, takes the finished, machined component and sends a jet of air in its direction to blow away the metal chips from the spindle. The finished component is placed precisely onto a specially prepared pallet. Taking into account all the requirements related to the movement of the robot in a human-safe environment, the whole cycle lasts approximately one minute.

"After several months of experience in working with cobots, we know exactly what should be done to best meet their role in our CNC production process. This work requires the highest precision and repeatability," says Nikodem Bernacki.

The whole workstation with the robot and the mount weighs about 60 kg – it can be moved by two employees.

"Cobot is stably mounted, it can be easily transported, and the changeover and preparation for work in a new place takes only 20 minutes. It takes about an hour to fine tune the machine and robot and start production," says Nikodem Bernacki.

Currently, there are two operators working on each shift, handling the supervision and tending of 11 machines. Employees are responsible, among others for the changeovers of CNC machines, preparing parts,  transporting them to and from the lathes, as well as programming and moving cobots between stations.

"Our philosophy is to use the machine park to the maximum extent - cobots working in three shifts allow us to do so," says Nikodem Bernacki. 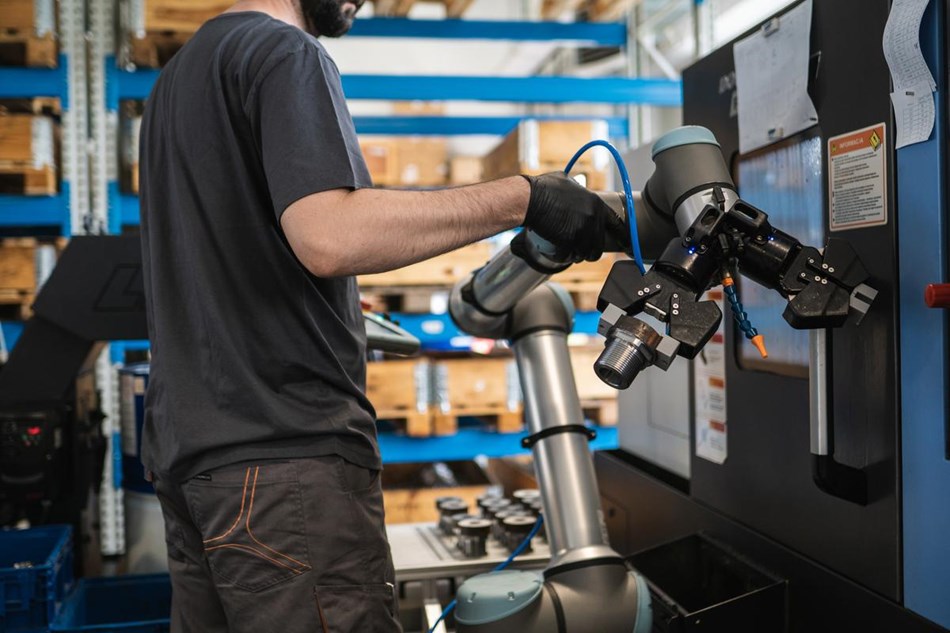 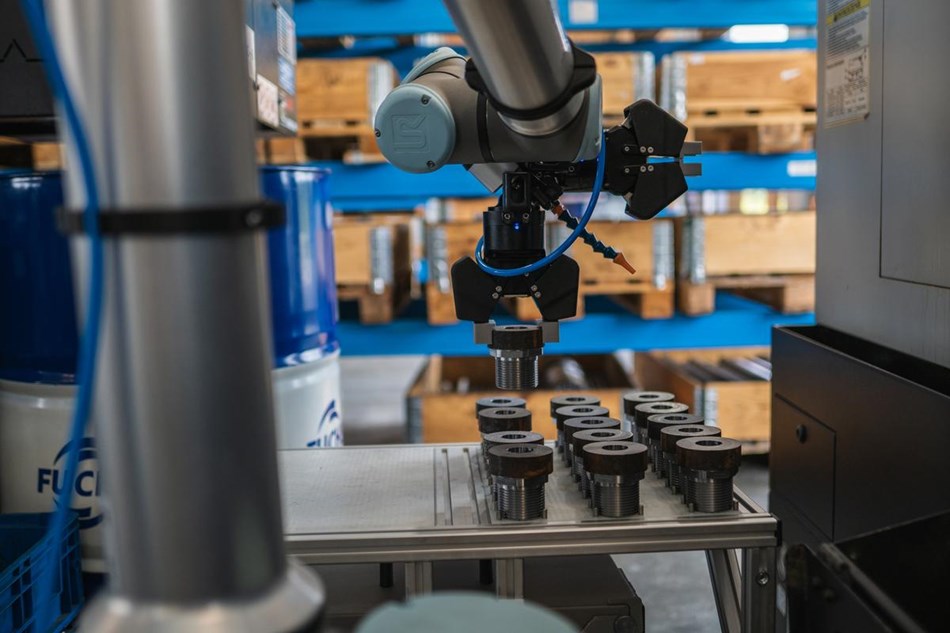 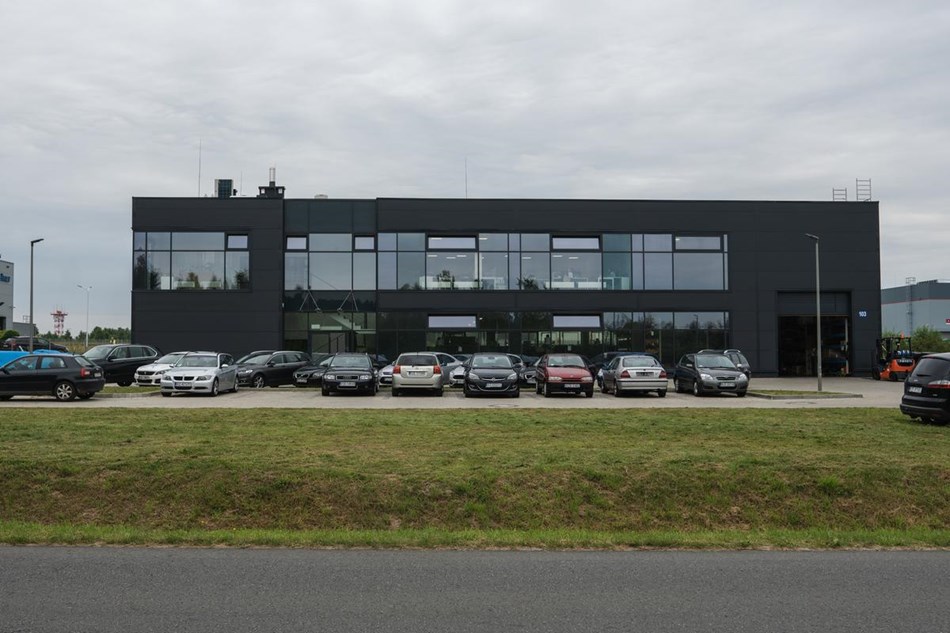 Tailored to the needs

Cobots by Universal Robots were chosen thanks to their functionality: easy programming, the ability of quick and easy change to work on another machine, compact size and adaptation to the needs of the company. Safety considerations also played an important role - they can work side by side with people thanks to certified built-in safety features. Operators quickly got used to work with cobots which turned out to be extremely helpful.

By implementing cobots, Bernacki Industrial Services has gained experience, which translates into know-how in the field of operation of collaborative robots. The company itself developed an effective method of mounting collaborative robots to the ground.. Bernacki also developed a proprietary 3D printing method of gripper fingers, which are useful for retrieving manufactured parts of various geometries.

"We were impressed with how UR cobots carry out tasks previously performed by people. I personally participated in the implementation of the first cobot – writing the program, developing the concept and the station. We were able to integrate cobot with standard grippers very quickly, achieving full compatibility," says Nikodem Bernacki.

“Our philosophy is to use the machine park to the maximum extent - cobots working in three shifts allow us to do so.”
Nikodem Bernacki
AUTOMATION CHALLENGES SOLVED
KEY VALUE DRIVERS
TASKS SOLVED BY COLLABORATIVE ROBOTS: