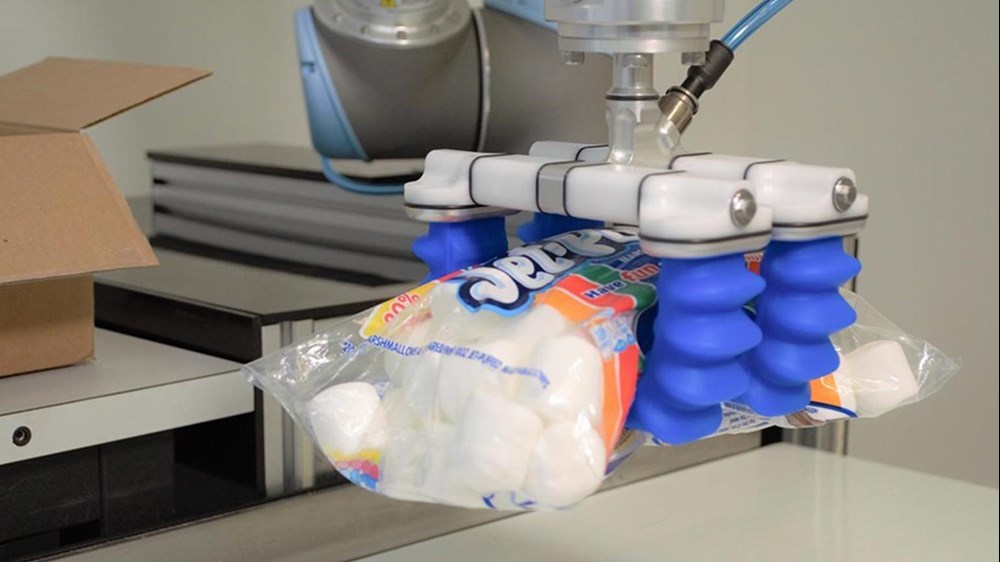 What is a robot claw?

Robot claws are one of the simplest types of gripper. They are popular among hobbyists, who are attracted to the simple design and functionality of these gripper types. Typically, robot claws (sometimes known as 'robot claw grabbers') consist of two claws (also known as 'jaws') that come together on opposite sides of an object in order to grasp it. In this article we will use the term “claw” in its widest sense; i.e. referring to any type of gripper that incorporates fingers or jaws that grasp items by closing around the outside of an object. These fingers can be hard or soft, with soft grippers finding many uses in food production and in handling delicate objects. UR robots support a variety of end-effectors, including claw-style grippers.

How robot claws are used?

Roboticists have found numerous uses for robot claws based on this simple design. Robot claws are popular end effectors in manufacturing environments, where, for example, they can be used to perform applications for robots arms such as assembly, pick & place and packaging & palletizing. Robot claws can also be seen in space;  NASA's InSight mission uses a robot claw arm to place instruments on the Martian surface. Marine researchers have even used robot claws to conduct undersea research on jellyfish. 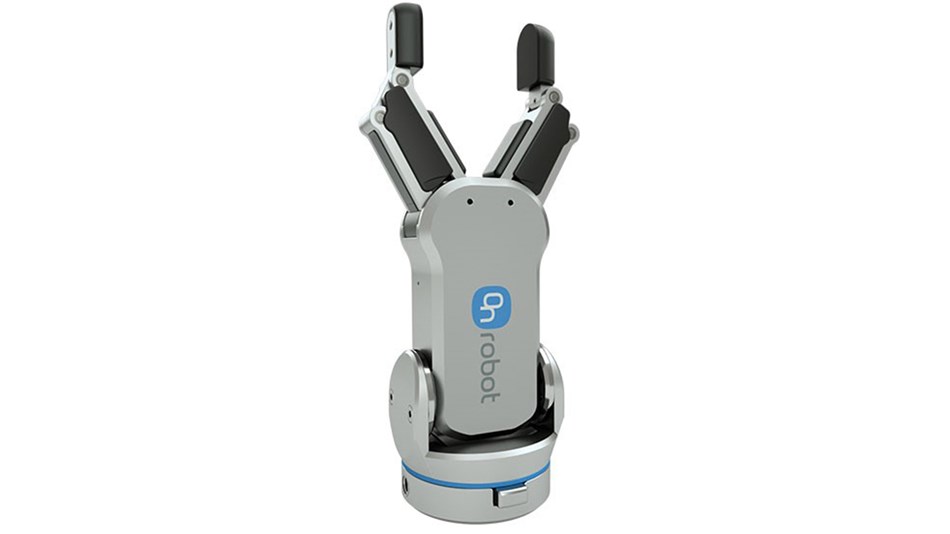 Robot claw designs inspired the 2- and 3-finger grippers that are so popular with users of collaborative robots. The claw-like design principle has also inspired a variety of soft gripper designs.

We'll look at specific examples of these grippers in action below, but first let's briefly explore the differences between robot claws and mechanical claws.

How does a mechanical claw work?

Mechanical claws are often used for gripping/clamping items in manufacturing environments. The two most common types of claws and clamps used are mechanical and hydraulic. Hydraulic clamping/gripping systems are best suited to high volume applications and to applications where critical tolerances must be maintained. Using electric pumps and digital pressure switches, hydraulic claws provide around 1% accuracy in clamping force.

Mechanical clamping and claw systems are a good fit for small production batches and in situations where wide tolerances are acceptable. Mechanical systems are usually adjusted manually using a wrench, which produces around 10% accuracy in clamping force. Cheaper than their hydraulic counterparts, but also more time consuming to operate, mechanical claws and clamps are commonly used in extreme manufacturing environments such as during high temperature operations, where hydraulic systems would not be safe to use.

Mechanical claws use various methods to close their pincers. For example, in some designs when a piston in the middle is lifted, the pincers close. In other mechanical claw designs, an electromagnet is used to bring the pincers together. The principle is always the same, however with the gripper using jaws to grasp an object.

There are many claw-like end effectors found on collaborative robots, from soft grippers to 2- and 3-finger grippers. These 'robot claws' provide levels of intelligence and autonomy that are way beyond the capabilities of their mechanical counterparts. For example, a robot claw (or a robot clamp) can provide useful feedback to your cobot and PLC. This data can then be used to finetune your manufacturing processes. Cobot grippers are also smaller and more precise than mechanical claws.

Let's take a look at some of the claw-like and claw-inspired grippers available through UR+,a global ecosystem of components, software, and application kits that have been validated and certified to be mechanically, electrically, and digitally compatible with cobots from Universal Robots.

Parallel grippers (sometimes referred to as 2-finger, or 2-jaw grippers) involve two pincers closing parallel to the workpiece in order to achieve grip. From this simple claw-like design, ingenious engineers have developed a wide range of versatile gripper technologies that have found uses in manufacturing applications from material handling and assembly through to packaging & palletizing. Parallel grippers are either electrical, pneumatic or hydraulic. One limitation of parallel grippers is that they can only accomplish a pinch-type grasp, which does limit their versatility. Adaptive grippers bring new levels of functionality to parallel gripper design. Adaptive grippers are able to adapt themselves to different product shapes without having to be reprogrammed every time.

Gimatic's KIT-UR-G, for example, is an electric, 2-finger parallel gripper that can be directly connected to your UR cobot's wrist. Compatible with UR3 through UR10e cobots, this gripper is used for material handling, assembly and machine tending applications. 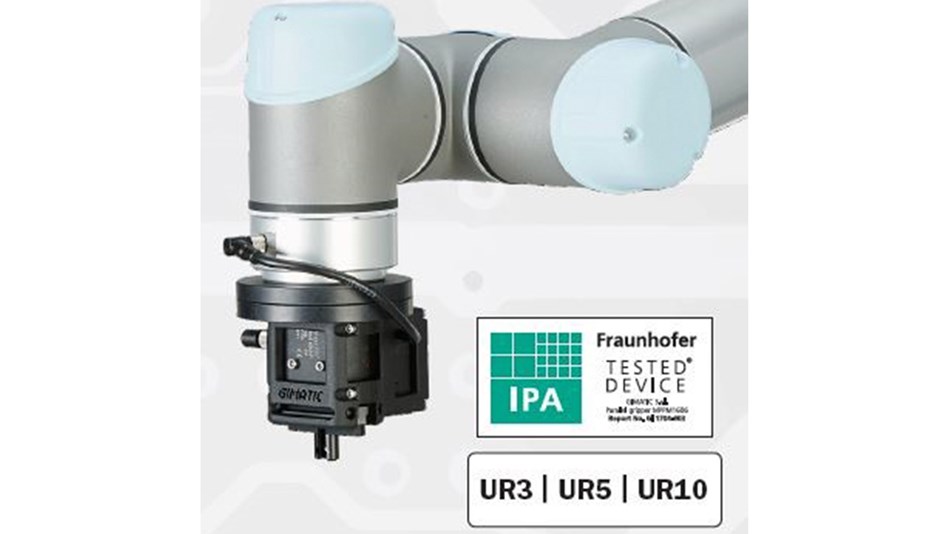 Gimatic's parallel gripper is plug and play with compatible UR cobots.

Robotiq's Hand-E gripper provides a 50-mm parallel stroke, which makes it ideal for precision assembly tasks. The gripper's sealed design is rugged enough to ensure reliability in the toughest manufacturing conditions, including CNC machining. Specially designed for use with collaborative robots, Hand-E also provides adjustable force, rounded edges, self-locking functionalities, and other features that make it safe to use in close proximity to humans. Unlike mechanical grippers, the Hand-E is truly adaptive, which means that it is able to autonomously adjust to many different types of products of different sizes and shapes. 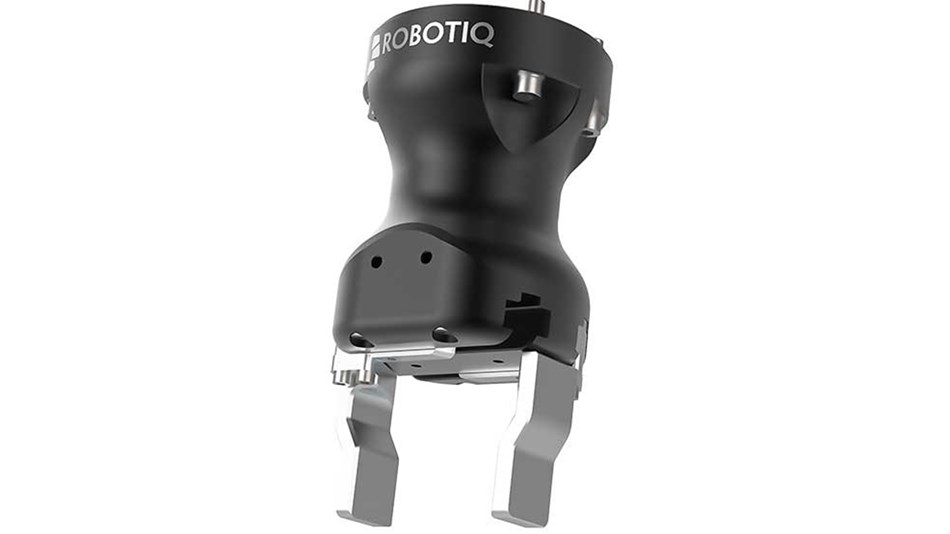 Hand-E comes in both single (pictured) and dual setups. Dual setups allow you to connect two hand-E grippers to your cobot at the same time.

Fusion OEM is a U.S. Company that specializes in part machining. Fusion's high-mix, low-volume production facility is home to 14 CNC machines. The company wanted to free its workers from repetitive loading and unloading tasks, so they deployed UR5e and UR10e cobots fitted with Hand-E grippers in order to automate this task. The gripper first picks parts presented to it on a nesting system. Then it opens the CNC machine's door and inserts it into the chucking system. The gripper then closes the door and sends a signal to the machine to start the cycle. “We’re able to connect the grippers directly to the robot’s wrist, get feedback on position and force, and know if there’s a part where there should be one and if it’s the right part,” said R&D manager Stephen Milchuck. 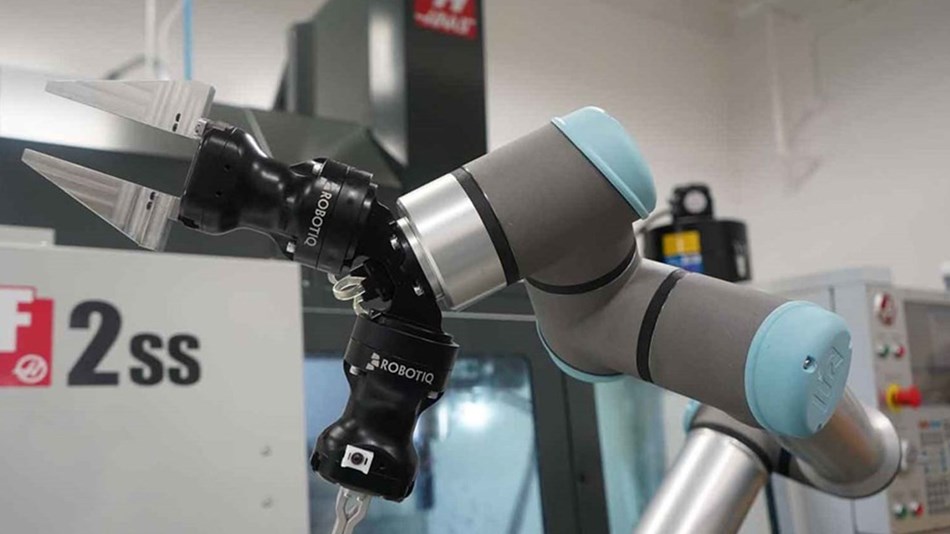 3-finger parallel grippers are also claw-like, inasmuch as they involve bringing fingers (or jaws) together to close around an object. Sometimes known as self-centring grippers, 3-finger parallel grippers are powerful, but lack flexibility and the jaws will have to be changed for each product part being handled. 3-finger adaptive grippers bring extra flexibility to the equation, enabling a wide range of possible applications and delivering the ability to handle high mix/low volume production runs without requiring programming or fresh jaws every time a product changes.

The 3FG15 from OnRobot (pictured below) is a 3-finger gripper that's ideal for grasping round and cylindrical objects in machine tending applications. 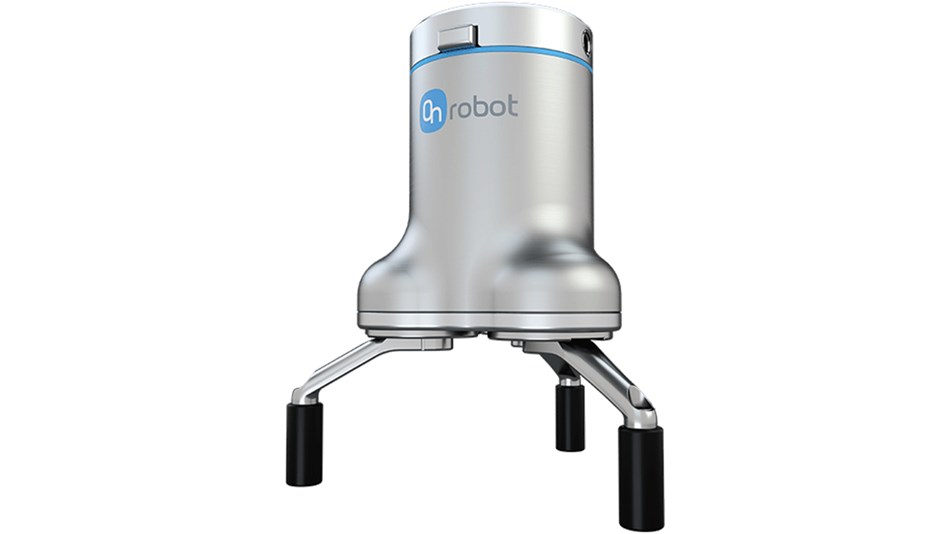 The gripper automatically centers workpieces, which enables a strong, stable grip and precise placement. Its large (up to 150mm) stroke optimizes CNC lathe-tending for multiple part sizes while customizable fingertips allow the 3FG15 to flexibly grip a wide range of part sizes and shapes.

The word claw conjures images of hardy, sharp crab-like extensions, but this association is somewhat misleading because cobot grippers are designed for safe use in close proximity to humans. In fact, some soft grippers use claw-like designs to enable handling of delicate items such as foodstuffs. 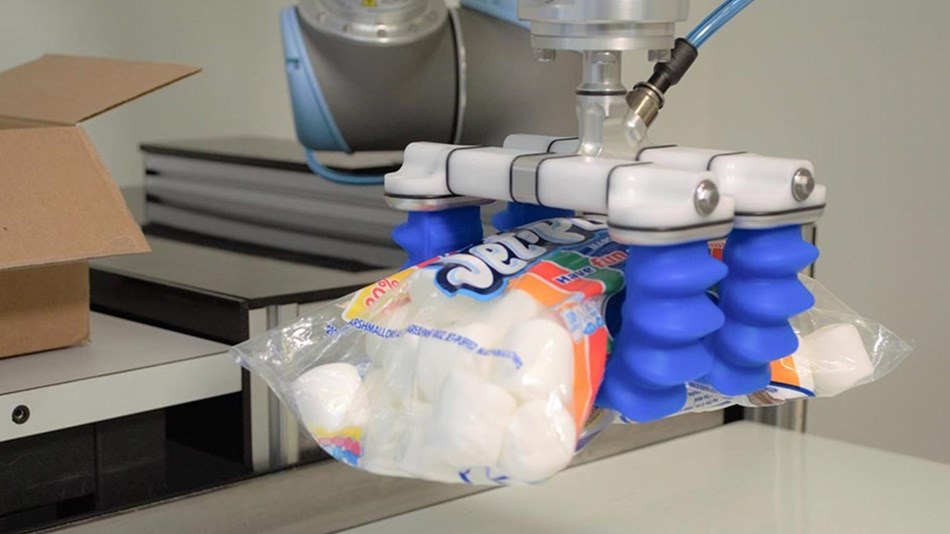 This claw-like soft gripper from Soft Robotics has four jaws that can be used to close gently in on delicate items, such as marshmallows.

Soft Robotics’ Cobot Kit, mGrip P4 (pictured above) is a versatile gripper that can handle a wide range of collaborative robotic applications from pick and place to machine tending. Designed for plug and play capability with Universal Robots, the system is designed for rapid deployment and easy programming and comes with an integrated air source.

SoftGripping's SoftGripper is specially designed for handling food products. You can use up to 8 fingers fitted on different gripper bases, but the gripper can be arranged in several different configurations depending on the application and product you want to perform. 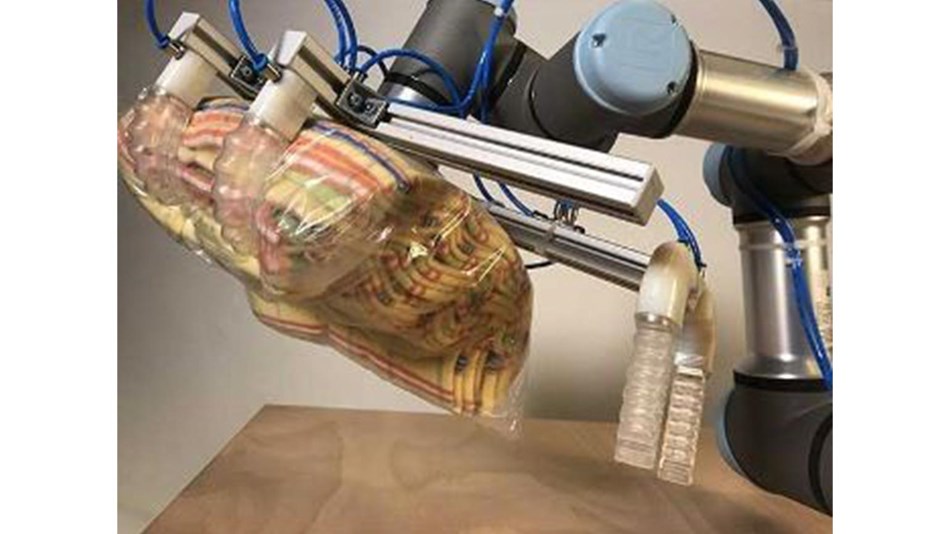 The SoftGripper uses compressed air to power its gripping forces.

For the ultimate in customizability, the HERGA-Lightweight System is a multi-purpose End Of Arm Tool designed to support a variety of both gripping- and vacuum-based pick and place operations. HERGA allows vacuum and pneumatic grippers to run at the same time. Opening up unique possibilities for end users. This versatile system is ideally suited to gripping 3D free-form surfaces. 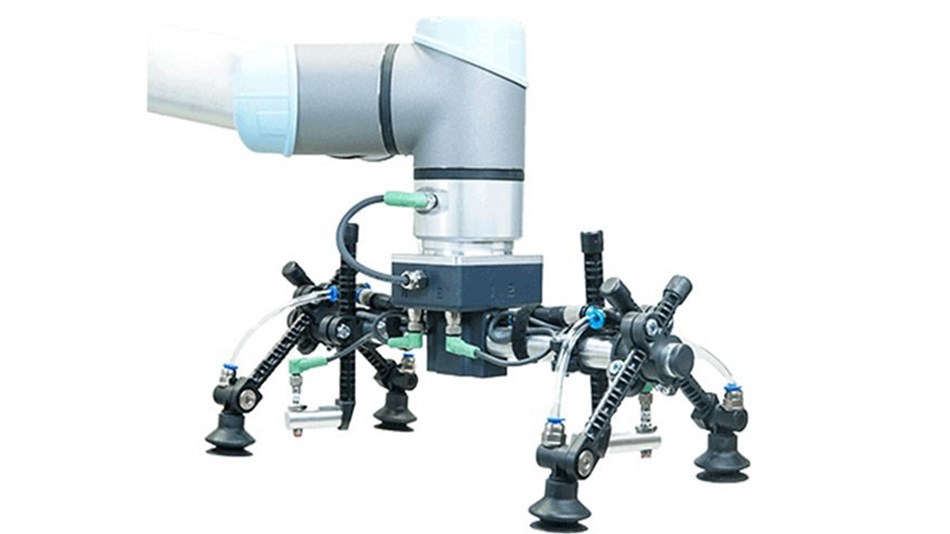 The HERGA Lightweight System is compatible with UR cobots UR3 through UR10e.

We've just scratched the surface of the many claw-like grippers available through UR+. Check out our Handling Grippers page to discover more! 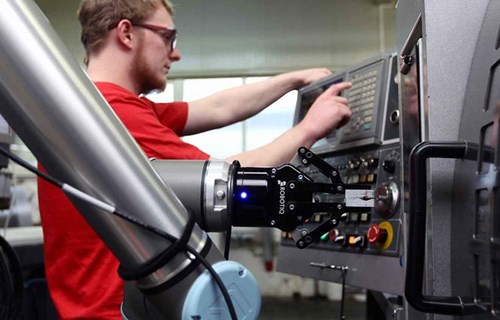 Types of Grippers Used in Manufacturing

In the simplest terms, grippers are devices that enable robots to pick up and hold objects. When combined with a collaborative (or 'cobot') industrial robot arm, grippers enable manufacturers to automate key processes, such as inspection, assembly, pick & place and machine tending. 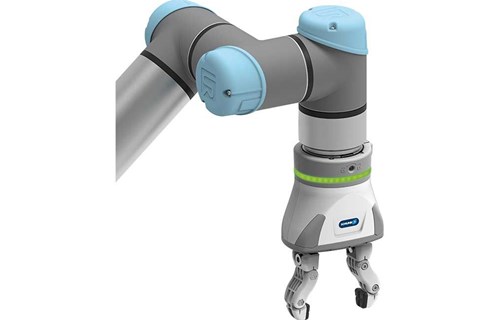 In this article, we'll take a look at some of the UR certified electric and pneumatic grippers available through UR+ –a global ecosystem of components, software, and application kits that have been validated and certified to be mechanically, electrically and digitally compatible with cobots from Universal Robots. 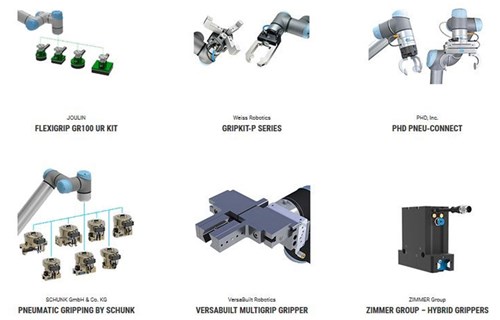