move the part not the tool 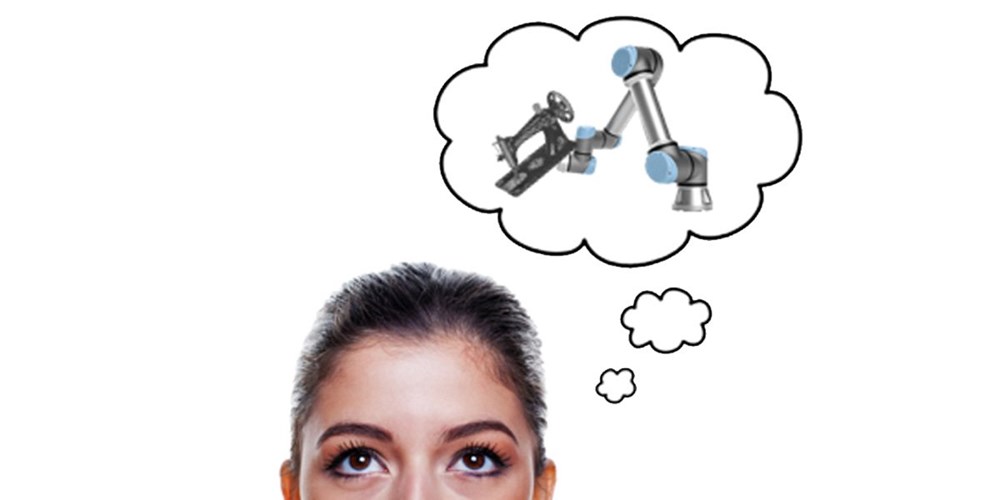 In many process applications such as gluing, deburring, sewing, polishing, etc, it's often easier to pick up the part with the robot and move it at a constant speed around a fixed tool such as a sanding belt, deburring tool, sewing machine, polishing wheel, etc. Picking up a sanding belt at the end of a robot and moving it around isn't very convenient after all. Or you can just imagine attaching a sewing machine to the end of a robot arm and moving that around.

Not only are the tools often heavy but they're also not typically designed for integration with robots and therefore can require significant design work or customization. The whole idea of collaborative robots is that they're flexible and easy to use.

But what about dispensing? In fact, there are robotic dispensing end effectors available. Yes, but if you use the robot to move a dispensing end effector, then you probably also need some other automation to move parts in and out from in front of the gluing robot. Wouldn't it be easier to have just 1 robot do both the material handling and present the part to a fixed gluing dispenser? In some cases it is. These are just a few examples of where the new, super easy-to-use Remote TCP functionality in Polyscope 5.4 comes in

Remote Tool Center Point (commonly known as Remote TCP or RTCP) enables the user to program circle moves and waypoints relative to a fixed (remote) TCP. These familiar and simple commands, however, unlock powerful computational magic that happens behind the scenes. The system calculates how to control the robot speed, acceleration, and deceleration to achieve a constant speed of the part at the RTCP. Without RTCP capability, this is very challenging to program especially around arcs at the edges of your part. It can be done using very small steps and some fine-tuning, but this can result in programs in the thousands of lines. Other alternatives could be taught by demonstration or offline robotic programming software. But those can be imprecise/hard to fine-tune or expensive/require learning a complete programming environment. The RTCP functionality is embedded in eSeries robots and these commands are inserted right in the programming tree so there's no additional learning required to use the functionality. And it's precise. The motion is smooth and fluid with no stops or pauses in between the execution of each of the movements.

Check out these two demos that were created using RTCP functionality.

In the first demo, an ATI Compliant Deburring Blade (CDB) is fixed on the workbench. A UR10e robot, equipped with a Robotiq 2F-85 Adaptive Gripper, present the metal part to the ATI CDB to deburr the internal features. The robot moves the part at a constant speed relative to the ATI CDB

In the second demo, a wheel sander is fixed on the workbench. A UR10e robot, equipped with a custom vacuum end-effector, picks up the sheet metals one at a time, and present the part to the wheel sander to deburr the external contour. The robot was able to move the part at a constant speed relative to the sander.

To learn how to program this demo, please check out the technote on Universal Robots' Support Site: https://www.universal-robots.com/how-tos-and-faqs/how-to/ur-how-tos/remote-tcp-example-sheet-metal-deburring-54588. Instructions and sample program file are provided.

To activate RTCP functionality, please register your UR robot at https://www.universal-robots.com/activate/ to obtain the registration file.