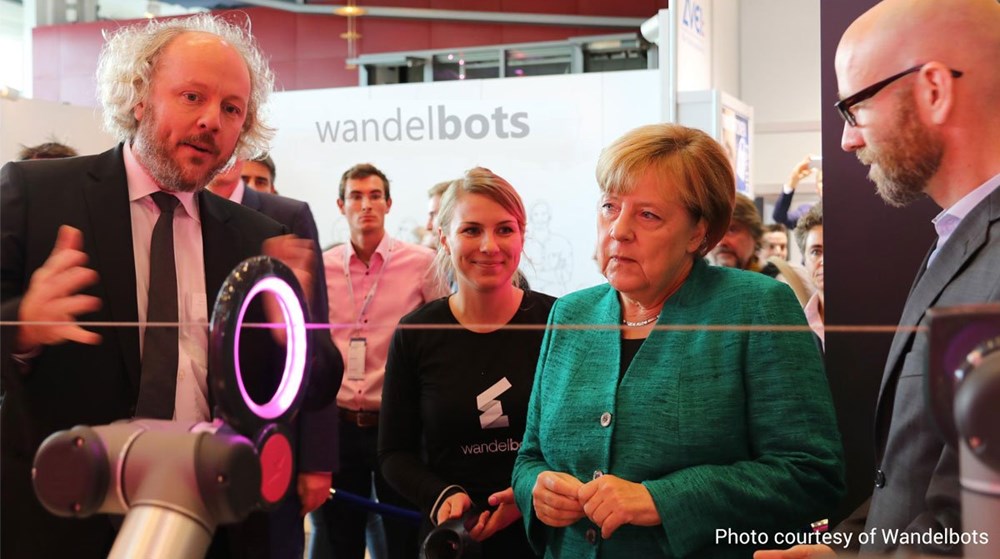 As German Federal Chancellor Angela Merkel and Mexican President Peña Nieto visited booths at the Hannover Messe, they echoed the now predominant tone at the world’s largest industrial fair; when asked to greet a robot - instead of a formal handshake - both went for the more casual fist bump, a symbol for the relaxed, natural interaction of humans with digitization, robots, and machine learning.

One of the exhibits the chancellor stopped by was Wandelbots, a startup from Dresden, Germany, exhibiting UR cobots in a show-stopping application that enables humans to program the robots by simply moving their arms in front of it. Equipped with motion capture sensors, the cobots can learn the movements and can automatically generate them again.

“We needed a sensitive robot that can stop safely if it is moving near us and that’s why we’re using Universal Robots. It’s a nice robot and it’s easy to program,” says Wandelbots founder Maria Piechnieck.

When walking the floors of the massive show, attendees encountered UR robots everywhere; mounted on mobile robots, picking and placing, doing random bin picking, assembling in augmented reality, drilling, and soldering. The proliferation of the iconic blue cobots, that pioneered what is now the fastest-growing segment of industrial automation and continues to lead the cobot market, amazes UR’s CTO and founder, Esben Østergaard.

“For me personally I’m especially happy to see that the mission we had when we started the company actually seems to play out,” he says. “We wanted to make a tool that allowed people to automate on the factory floor on their own. It’s a tool for high-value creation especially in small and medium-sized companies now being used successfully deployed all over the world.”

Universal Robots is close to reaching a historic figure of 25,000 cobots sold. President Jurgen von Hollen attributed this milestone to the company’s UR+ strategy. A large part of Universal Robots’ own Hannover booth was dedicated to showing new products from this rapidly expanding portfolio of UR+ products certified to work seamlessly with UR robots.

“We have an open ecosystem of developers and partners helping us achieve the optimal solution for our customers worldwide,” he says. “They’re local, assisting customers in developing what they need specifically. For me, that’s an exciting part of our business. We’re not only looking at large customers or small, or medium but all customers worldwide in all applications and all industries. That’s the strength of Universal Robots.”

Visitors at the UR booth also had a chance to interact with the free UR Academy modules, joining more than 20,000 users from 132 countries worldwide that have signed up so far to become robot programmers.

“The UR Academy is all about training people working in the factories being more adept at using automation. It’s a transition of factory workers to be less working like robots and more working like process experts, creative experts, material experts, and experts in customer demands,” explains Østergaard, adding: “It’s quite a thing to be here at the fair and to see how many have actually understood this message and jumped on the train; both customers and I think we can also count around 20 competitors who are now trying to more or less copy what we do,” he says. “For me personally it’s quite a big thing to see the thing we started in 2005 and began selling in 2008 is now a worldwide phenomenon. It’s pretty much a trend in manufacturing these days – and that’s super cool.”

Want to find out where you can meet the cool cobots next? Check out our calendar for an event near you! 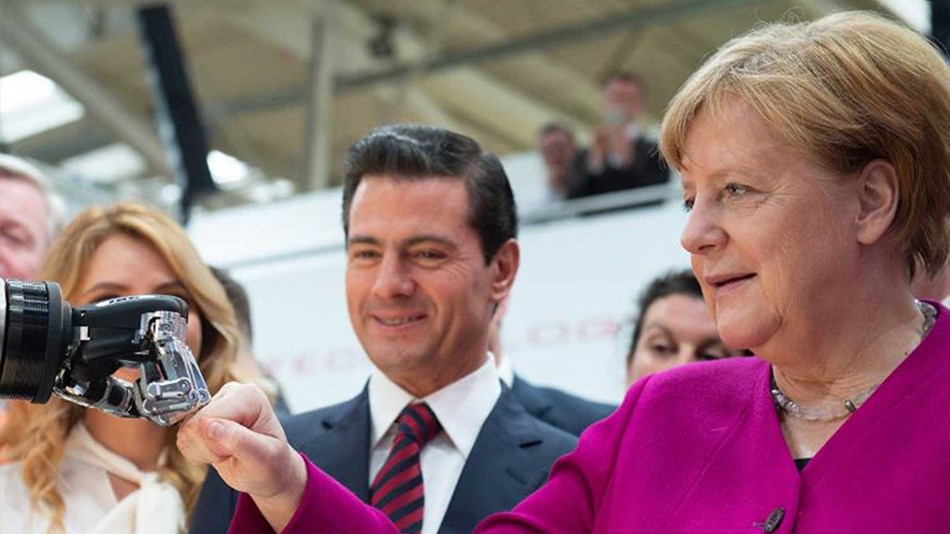 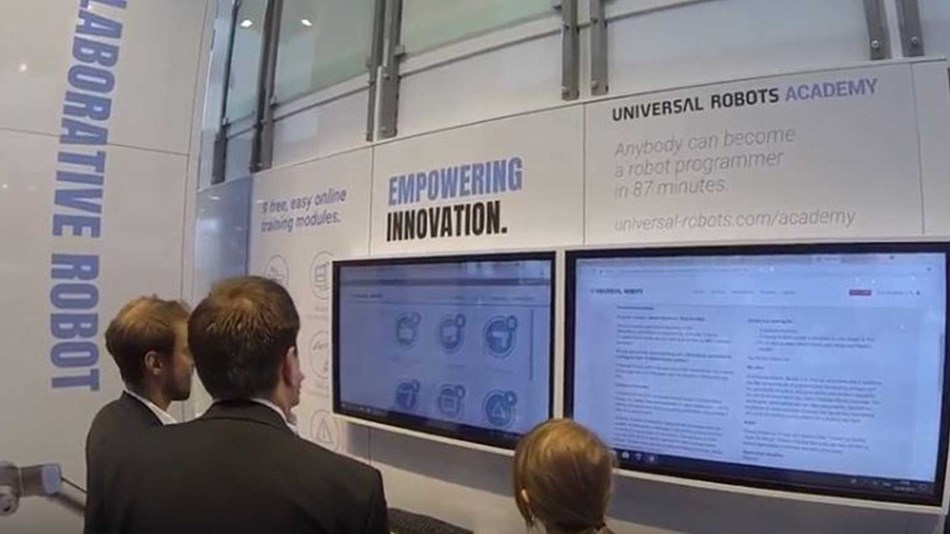 At the German show, attendees could take the nine free UR Academy modules for a whirl. 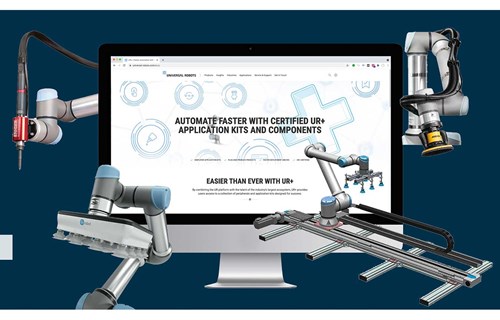 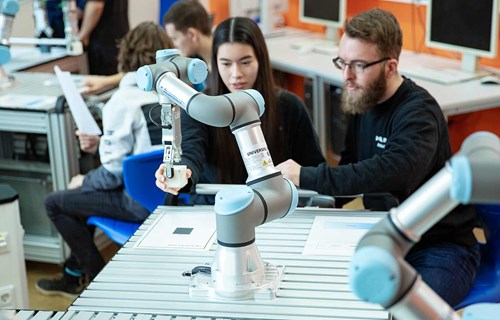 Cobots in the Classroom: How the UR Academy Upskills Students and Industry Professionals

“The quality of a Universal Robot is a given, it’s how you use the collaborative robot arm that determines whether you’re successful or not.” In this blog, we speak with Mikkel Vahl, Global Head of Training and Education at Universal Robots, about the critical role of the UR Academy in deploying cobots. 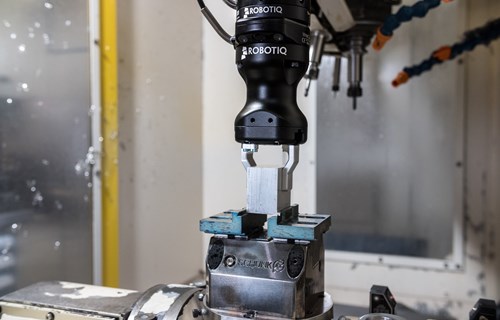 Robotiq Presents Hand-E, the First UR+ Gripper Ready for the e-Series

Robotiq completes its Adaptive Grippers offering with Hand-E; the first UR+ certified electric gripper ready for the e-Series, the new cobot line from Universal Robots. Hand-E’s high accuracy combined with a 50mm parallel stroke makes it perfect for precision assembly tasks. Its sealed design ensures reliability in the...