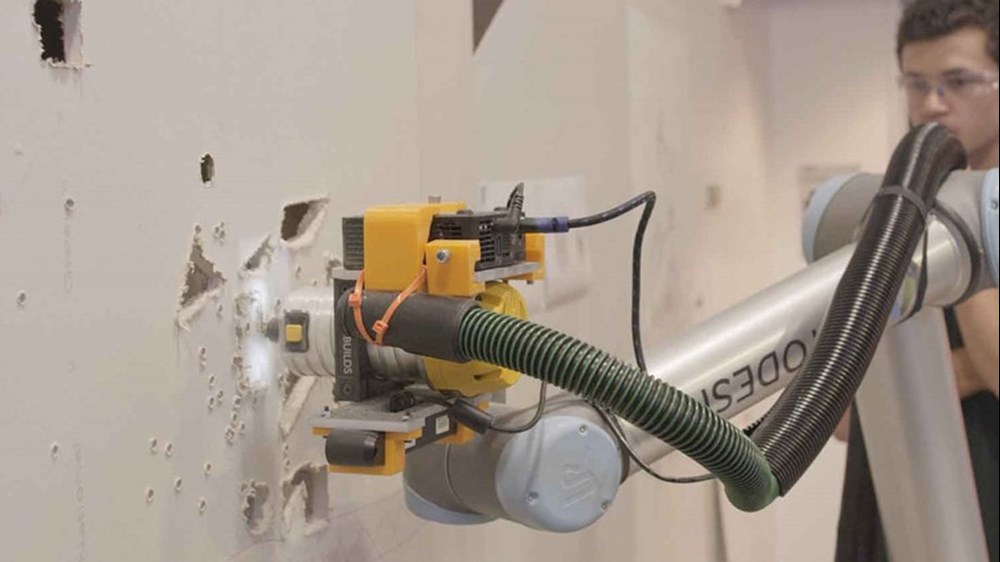 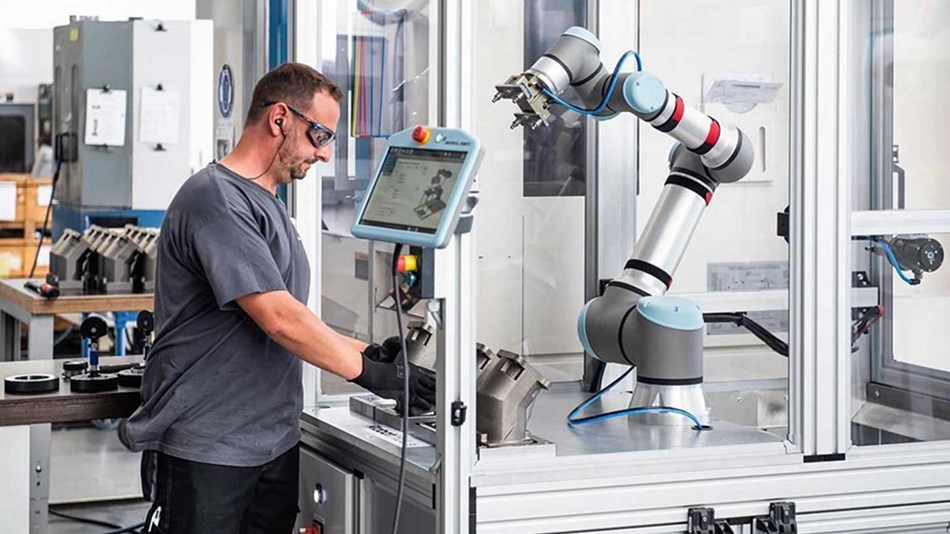 The UR16e is a heavy duty cobot with a payload of 16kg (35.3 lb), seen here working in close proximity to a human on a deburring application.

What is an automated manufacturing system?

In 1913 Henry Ford forever changed the world of manufacturing with a moving assembly line, staffed by workers that specialized in specific tasks. Today there is another evolution in manufacturing taking place: automated manufacturing.

Humans get tired, lose focus and make honest mistakes. Repetitive tasks that require precision get more difficult for people the longer they are required to perform them. Manufacturing automation brings automation equipment into the equation for improved safety and efficiency.

Thanks to advances in technology, such as intuitive programming pendants, it is now possible to easily create detailed instructions for robots to follow. Advanced sensors allow robots to understand and interact with the environment around them. Improved designs reduce the need for maintenance, enabling automated manufacturing environments to operate around the clock.

Degrees of Automation in Manufacturing

You will find varying degrees of automation in manufacturing. For example, collaborative robots are designed to work alongside humans to complete dangerous or repetitive tasks with precision. Other manufacturing facilities rely almost entirely on automation machines, with minimal human input.

This flexibility is dramatically changing how supply chains are designed and operated. For example, the number of manufacturing jobs in Europe and the United States has steadily decreased over the past four decades. Collaborative automation is helping to slow (and potentially reverse) this decline as manufacturers invest in solutions that increase the output of every unit of labor while improving working conditions.

How is automation used in manufacturing?

There are three categories of automation in manufacturing:

As the name implies, this type of manufacturing automation involves the creation of purpose-built machinery. Instead of computer circuits and chips, engineers program the machine using gears, cams and other hardware during the design phase.

If a manufacturer wants to complete a different task, they will need to significantly modify or replace the machine. Fixed automation is most useful in high-volume facilities where the processes and products rarely change.

This type of automation is more flexible, allowing for the creation of batches with unique design instructions. Instead of relying on purpose-built machines, manufacturers use computers to program their machinery to complete a broader range of tasks.

In between batches, the systems are taken offline for reconfiguration. Therefore, this type of automation is best for manufacturers that need to complete large runs of similar products - reducing the need to take the system offline for reprogramming.

Flexible automation empowers manufacturers to create multiple products using industrial robots, without the need to shut down the production line for reprogramming. A programmer uses a remote terminal to modify or load new instructions on-demand.

These instructions can be stacked, meaning a single robot can complete multiple complex steps before an item is moved to the next stage.

Cobots take this flexibility a step further through their small footprint and mobility. All Axis Machining, a Texas-based manufacturer, mounted their UR10 cobot on a pedestal stand (pictured below) so that it could easily be moved between different tasks on the factory floor. 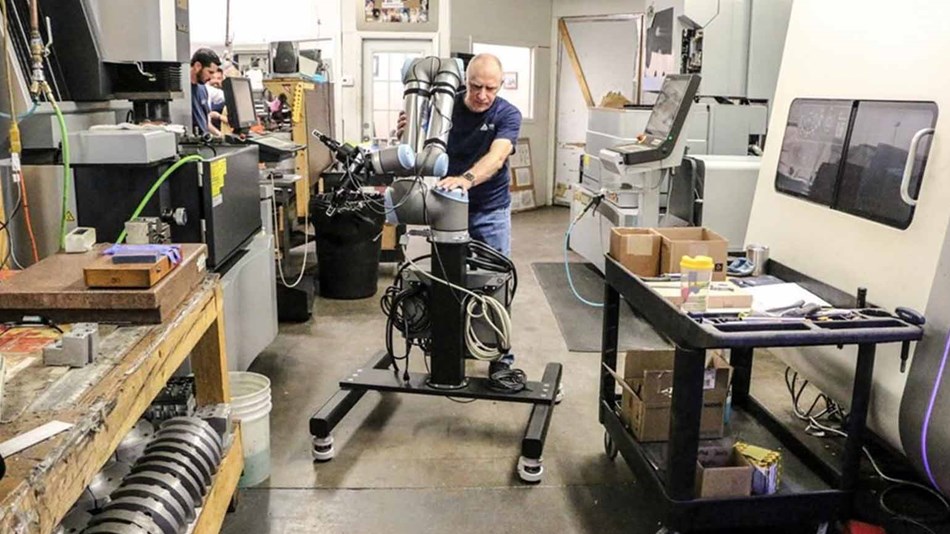 Cobots are a flexible alternative to traditional automation

Examples of Automation in Manufacturing

For in-depth, real world examples of automation, you should review Universal Robots’ Automation Case Studies. Each one highlights a specific example of a company leveraging technology to improve production and safety.

Automation Beyond the Production Line

Automation in manufacturing extends beyond the physical production of products. Automation is also used in other key areas, including:

Each of these key areas impact the bottom line.

In the past, technologists argued that the world today would be largely automated, with minimal labor being performed by humans. Maybe someday, but not today or tomorrow. Human workforces play a critical role in designing and manufacturing the products we rely on today.

Universal Robots has sold more than 46,000 collaborative robots. These state of the art machines are designed to work alongside humans, helping to reduce workplace injuries. Cobots allow manufacturers to make the best use of human workers and robots; the former provide creative problem solving skills, mental flexibility, and real-world knowledge, while robots provide repeatability, accuracy and 24/7 availability.

The construction industry has the highest number of fatal workplace injuries, compared to other industries. Today it is increasingly possible for high-risk activities to be offloaded to robots. Robots allow construction firms to move workers away from high-pressure presses and high-impact drilling equipment and on to more value-added tasks.

Cobots feature in the construction sector too. Autodesk has deployed UR cobots to push the limits of human-robot collaboration. Autodesk recently deployed UR’s cobots alongside engineers during a conference, while conference attendees were invited to help build a Hive Pavilion - constructed using bamboo and other fine, fragile materials. Participants learned to leverage Autodesk software and UR hardware to construct the pavilion, demonstrating that cobots can be used in construction to reduce the potential for injury. 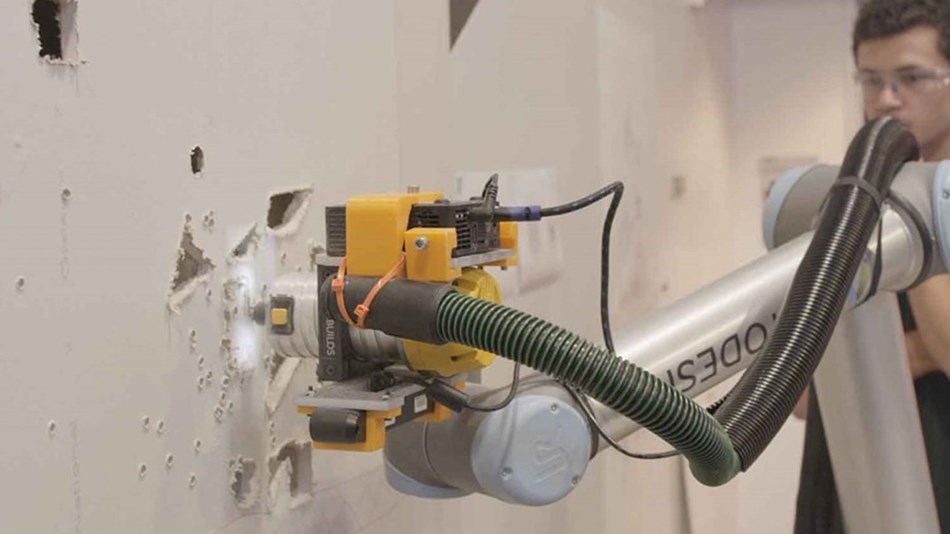 A UR10 cobot cutting out predefined sections of drywall.

As cobots prove their capacity for performing complex tasks in challenging environments, the innovation curve in more controlled environments is even more remarkable. One example is the ecommerce industry’s investment in high-tech fulfillment centers, where cobots assist humans in organizing inventory and picking products. Humans also work alongside robots to ensure order accuracy and successful shipments.

The innovation continues further upstream, as manufacturers invest in proven technology to protect their workforce and improve productivity. 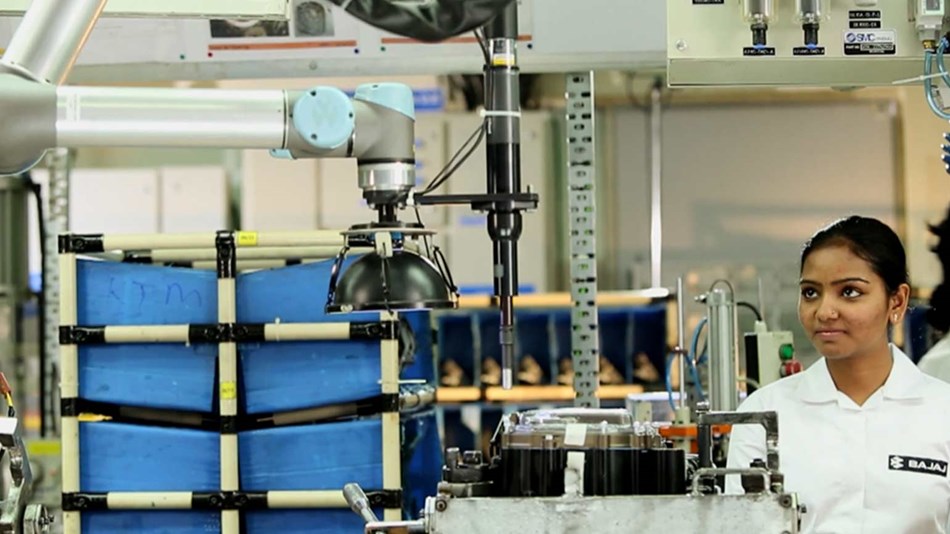 Collaborative automation allows humans and robots to work in close proximity without the need for cages.

Advances in automation sensor technology have unlocked a new era of innovation; allowing robots to understand their environment, as well as their impact on the objects they are programmed to manipulate.

For example, proximity sensors allow a robot to measure how close an object is, but understanding the size and shape of an object it needs to manipulate requires multiple sensors working together.

It’s about more than producing an image. The smart 3D robot vision sensors used by cobots rely on a variety of sensors working together. Depending on their application, cobots may require a combination of up to 7 different types of sensors:

Light Sensors can be used by cobots to provide context to the information generated from other sensors. This can be extremely useful in generating a comprehensive, 3D image of the objects they are manipulating.

Sound Sensors can allow for audible instructions to be received, or they can scan the surrounding area (similar to SONAR) using differences in sound frequencies to build a map of its environment.

Proximity Sensors rely on electromagnetic radiation being transmitted and received by parallel sensors. Three types of proximity sensors are typically found in robots:

IR transceivers can detect the reflection of light and help alert the cobot to a nearby object. Sound waves can also be used, similar to an ultrasound. And photoresistors measure changes in the presence of light, alerting the cobot to changes in light intensity as an object approaches.

Tactile Sensors rely on surface contact to complete a circuit. Elevator buttons are a widely known example - when you press on an elevator button, it temporarily completes a circuit which the computer translates into a command.

In manufacturing automation, tactile sensors perform a crucial role in letting cobots know when they’ve come into contact with an object. Meanwhile, force sensors can be used to inform a cobot as to how strong of a grip its gripper is exerting.

Temperature Sensors convert changes in voltage to temperature readings. Measuring the temperature of an object is critical to ensuring the desired outcome in some processes. For example, if materials get too warm, they could bend or melt. If they’re too cold, expansion could reduce the accuracy of measurements.

Navigation Sensors are used to help cobots understand their geographical location. In the fulfillment centers mentioned earlier in this article, robots use navigation sensors to help them make their way around the warehouse without getting lost or wandering into a restricted area. Cobots can receive geolocation information with the help of satellites (GPS) or magnetic fields (compass).

Cobots generally operate in a defined work space or cell, so GPS is not accurate enough to be useful. However, a digital magnetic compass could be used to confirm the orientation of a manufacturing arm, for example.

Acceleration Sensors help robots understand how quickly they are increasing or decreasing in velocity as they move around. Accelerometers can measure both speed and orientation. Dynamic force is a critical measurement for cobots as they manipulate objects. Without these advanced sensors, automation machines would not be able to intelligently interact with their environments.

We’ve barely scratched the surface in this article. Automation is helping manufacturers evolve, thanks to solutions that are flexible enough to complete complex tasks. Universal Robots is at the forefront of this evolution, with a proven lineup of collaborative robots (cobots).

You can book a robot demo based on your specific needs, or get in touch with an expert to discuss your company’s next evolution.