Universal Robots’ UR10 handles the “harvesting” - loading and unloading plates in 3D printers - at Voodoo manufacturing. Deploying the collaborative robot has tripled production output and will help the Brooklyn startup cut costs by 90 percent. The company chose the UR robot due to its quick integration with peripheral systems enabled through the UR+ platform.

Voodoo Manufacturing in Brooklyn, New York, runs a rapidly growing 3D printing farm scaling up to handle large production runs to compete with injection molding. The startup urgently needed to automate the manual loading and unloading of plates in their printers and looked at several different collaborative robot options. Their challenge was to find an easily programmable robot arm that also offered simple integration with a robot gripper as the end-of-arm-tool.

Voodoo Manufacturing chose Universal Robots’ UR10 as it offered a seamless interface with a 2-finger gripper from Robotiq. “We got the UR10 out of the box and were able to get it running, adding the gripper at the end of arm within just a few hours,” said Jonathan Schwartz, Chief Product Officer of Voodoo Manufacturing.The gripper is part of the rapidly expanding Universal Robots+ platform that features plug & play products for UR robots. A UR+ product is tested and proven to run well with UR robots from day one, eliminating countless hours of trial and error when integrating robot arms with peripherals. Charles Fenwick, industrial engineer at Voodoo, explains how the fact that Robotiq’s gripper software was implemented right on the UR robot’s own teach pendant made programming the gripper almost like “building a Power Point.” “No other robot had the ability to easily interface with the peripherals required to get the complete application up and running,” he said. “In getting the gripper to work with the UR10, I just had to drag blocks of information onto the robot’s screen, link up the different blocks and it basically runs itself.”

Vodoo has 160 3D printers. By placing the UR10 on a mobile base roaming the 18,000 square feet premises, the company will be able to use the collaborative robot to tend one hundred printers. By adding another UR10 to its fleet, the startup will scale from 30–40 percent printer utilization to 90 percent. “And from here on out, as we scale, we can just buy more arms as we have more and more printers,” says Schwartz, who is not hesitant to call the automation setup, named Project Skywalker “a massive success.”

The key to tripling output is the fact that the UR10 robot can run overnight. “We can monitor the robot through our own software and access the status of any given printer to see whether it’s printing or idle, which means we can deploy this in our factory and run it 24/7 without any human oversight,” said Schwartz, who describes it as “magical” first morning he came in to find more than 30 completed print runs handled by the UR10 overnight.

04 the implementation of the UR10

Voodoo estimates that the cost of implementing a UR robot was about five times less expensive than a traditional industrial robot due to the quick integration and the robot’s collaborative safety features that also meant the company did not need any safety cages, light curtains, and other safety measures usually needed when industrial robots work in a factory setting. “Instead of building a factory with caged-off areas and potential hazards, we are now able to create a friendly workplace with continuous and spontaneous improvement and interaction between humans and robots,” Schwartz explained.

Voodoo’s three year goal is to reduce costs by 90 percent. The increased output compared with the reduction in labor cost provided by the company’s first UR10 means that the robot will pay itself back in less than six months. “Beyond this there are many other opportunities in our factory to automate; whether it is removing parts from the build plates, or cleaning them, or inspecting them for quality, or eventually even packing and shipping,” said the Voodoo CPO.

“We got the UR10 out of the box and were able to get it running, adding the gripper at the end of arm within just a few hours”
Jonathan Schwartz Chief Product Officer 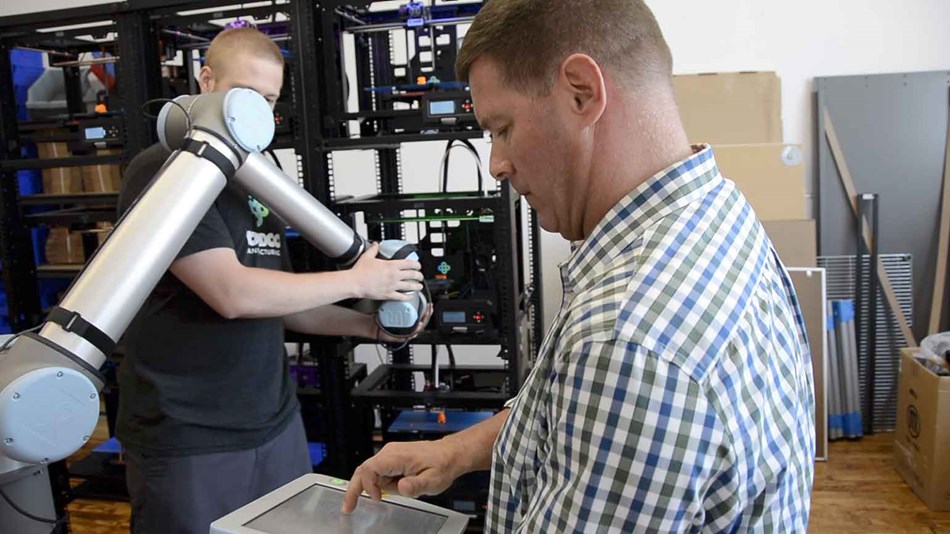 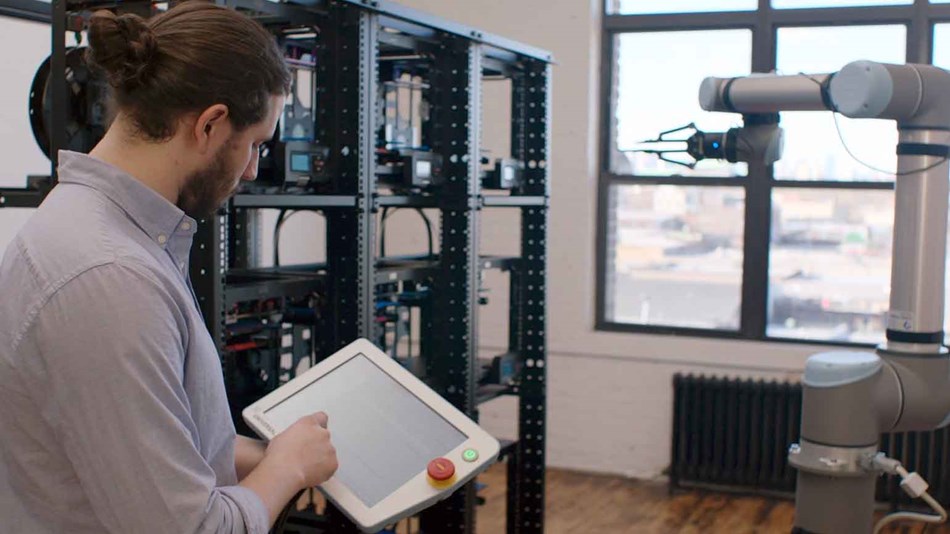