Finding qualified welders is becoming increasingly difficult. For the small weld shop Vattholma Mekano in Sweden, the solution to this is a collaborative UR10e robot equipped with the plug-and-play welding package SmoothTool, which is very easy to use and program and able to perform high quality welds over and over again. The fact that the robot is easy to move to the workpiece, instead of having to move the workpiece to the robot, is a big advantage for Vattholma Mekano, which often MIG-welds heavy buckets for excavators. The robot provides a better working environment and also frees up valuable time for human workers – up to 30 percent, estimates the owner, enabling the company to now increase its production volume.

With fewer and fewer young people training to be welders and many such courses closing, finding experienced welders is becoming more difficult with each passing year. At Vattholma Mekano, a six-person weld shop located just north of Uppsala in Sweden, a lot of the work involves large welded structures, such as repairing buckets for excavators. This is a relatively simple, but very time-consuming task. With its order books full, Vattholma Mekano would have been happy to employ more welders for this type of work, - if the company had been able to find any.

“We’ve been looking for a welding robot for over 15 years, so industrial robots have been on my radar for a long time. But they are not suitable for our business because they are expensive and need large-scale manufacturing to be profitable. We only make individual items to order, not large series,” says Sven-Ingvar Björck, CEO of Vattholma Mekano.

“Even small welding businesses can be automated now, thanks to cobots from Universal Robots. It’s a great solution for companies that can’t find sufficient staff.”
Karl Ericsson CEO Svenska Elektrod

One day, Sven-Ingvar Björck was passing Svenska Elektrod, which sells welding equipment. He noticed that the company had become a certified integrator for Universal Robots, and that there were some collaborative robots there.

“I had seen Universal Robots’ cobots before, at trade fairs and online, but this was the first time I had the opportunity to test one,” says Sven-Ingvar Björck about his visit to Svenska Elektrod.

Karl Ericsson, CEO of Svenska Elektrod, demonstrated the machine, explained the advantages of cobots and showed how easy they are to program.

“Even small welding businesses can now be automated, thanks to cobots from Universal Robots. It’s a great solution for companies that can’t find sufficient staff, as the robot is like an extra employee that continuously does the same thing over and over again, regardless of the day of the week or the time of day, providing exactly the same level of quality every time,” says Karl Ericsson.

When Sven-Ingvar Björck realized how a cobot could be used for Vattholma Mekanos’ work, he became very interested.

“As we work with numerous large and very heavy objects, we need a robot that is mobile.”
Sven-Ingvar Björck CEO Vattholma Mekano

And that is how Vattholma Mekano finally found a new employee with welding skills: The UR10e collaborative robot from Universal Robots. By using the SmoothTool welding package attachment, which is mounted on the end of the cobot arm, the robot can handle the welding hose package that is already available at the workshop, regardless of the power source or welding method, MIG or TIG. Vattholma Mekano uses MIG welding with different types of welding wire, ranging from tube wire to metal powder filled, usually on 60 to 70 millimeter thick materials.

“SmoothTool is a UR+ product, which means it is a UR-certified third-party plug-and-play application with hardware and software that are seamlessly integrated with the UR10e robot. A robot manufacturer working in this way with third-party suppliers on software and hardware integration is unique. But this provides huge benefits, as there are numerous UR+ applications that broaden the range of uses of cobots,” says Karl Ericsson. 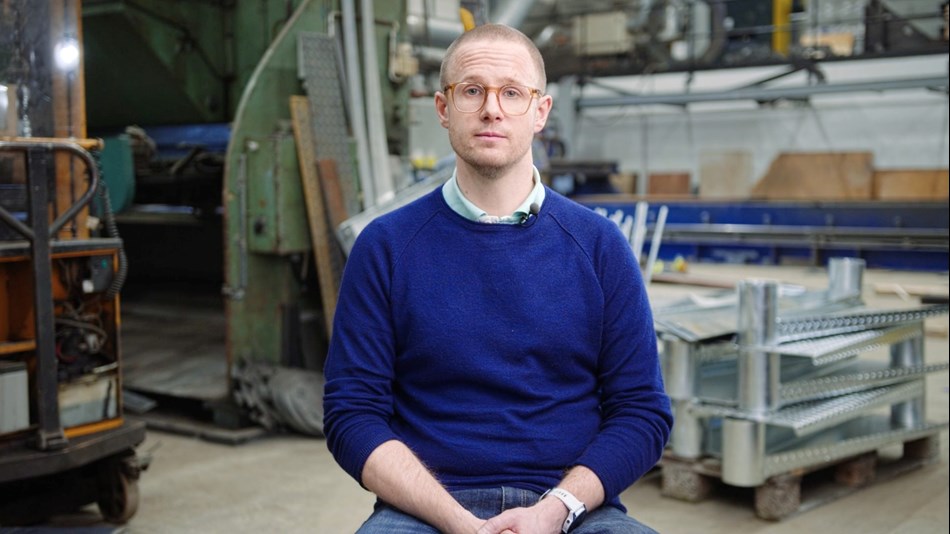 Karl Ericsson is the CEO of Svenska Elektrod, which is a certified system integrator for Universal Robots. Svenska Elektrod is a full-service supplier in the welding industry, and also helps industrial companies automate their operations. 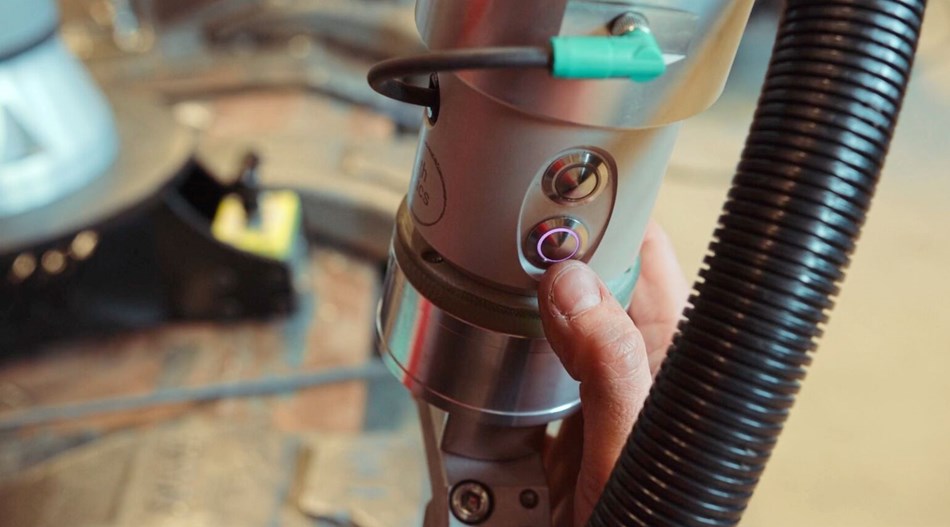 SmoothTool can be programmed at the touch of a button – blue button for linear welding, red for circular. 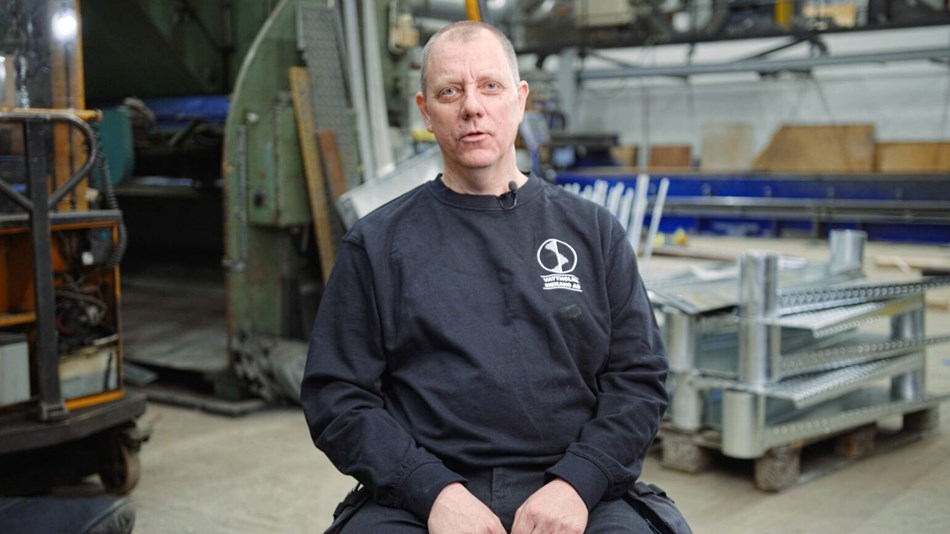 “It is difficult to find experienced welders. Each year only a few students graduate, and another industrial training course in the Uppsala area closed down recently,” says Sven-Ingvar Björck, CEO of Vattholma Mekano, about the decision to acquire a collaborative robot to increase the company’s production volume. 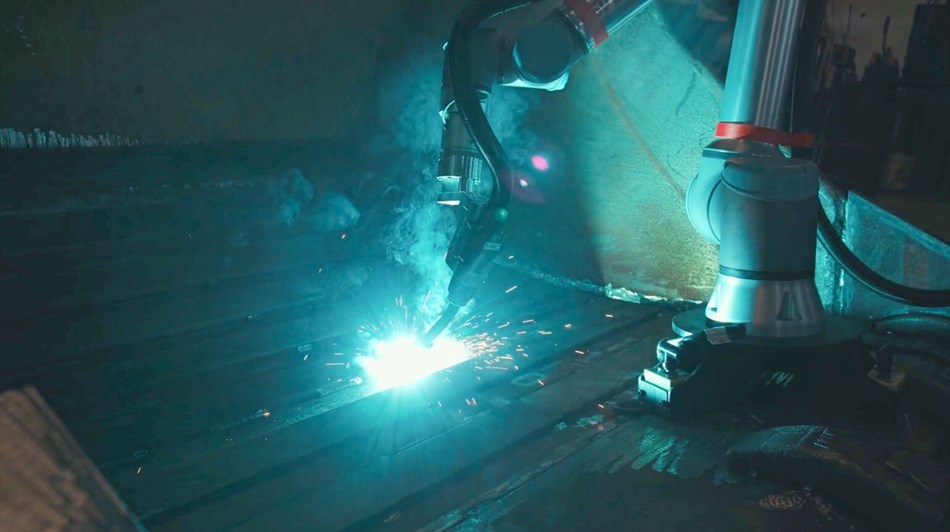 A typical task for the robot at Vattholma Mekano is to change the bucket steel and weld tooth holders on large buckets of construction machines. This involves welding work that takes two to three working days, with the cobot being positioned in the bucket and held in place by a magnetic foot. The cobot is also used to produce brackets for Vattholma Mekano’s own product – made-to-measure steps based on customer requirements.

The company is able to use the cobot for this type of single-item production for two reasons. The first reason is the cobot’s good maneuverability.

“As we work with numerous large and very heavy objects, we need a robot that is mobile. It’s easier to move the cobot than it is to move a bucket,” says Sven-Ingvar Björck.

The second, and mainreason for it being possible to use the cobot for single-item production, is that the programming is easy and quick to learn, and all the Vattholma Mekano employees can use it. Two buttons on the SmoothTool application, one red and one blue, and an accompanying tablet are used to program how the cobot should weld: Linear or circular, a continuous weld seam or pendulum welding.

“The programming was easy to learn during the three half days of training we received from Svenska Elektrod, even without having any previous experience of robot programming. Reprogramming the robot and switching between different tasks takes between two minutes and half an hour, depending on how advanced the items being manufactured are, for example if welding around corners is required,” explains Vatholma Mekano’s CEO.

Once the cobot has started welding, the employee can focus on doing more advanced welding tasks that need to be handled by a human. The cobot provides better and more consistent results for repetitive welding tasks, and gives rise to several benefits for the business.

“We get a better working environment with a calmer working tempo and less stress, as the welder does not have to sit for hours with the welding gas and heat, while at the same time profitability increases. It is estimated that we save 20 to 30 percent of our working time. So we can now handle more tasks and more complex welding assignments without having to hire more welders,” says Björck.

“The programming was easy to learn, even without having any previous experience of robot programming.”
Sven-Ingvar Björck CEO Vattholma Mekano

How to program the UR+ SmoothTool welding package

UR cobot models:
A UR10e