Unilever is one of the world’s largest companies within the Fast-Moving Consumer Goods (FMCG) industry and the owner of around 400 brands, available in over 190 countries. The company has four production plants in Poland. One of them, in the town of Katowice, specializes in packing tea delivered to the factory in 25 kilogram sacks. Cartons with the ready-to-sell product packed by employees to boxes are placed on pallets by six UR10 collaborative robots. The use of cobots shortened the palletizing time, optimised work ergonomics and relieved employees from the most strenuous tasks.

The Unilever plant in Katowice employs around 400 people working in two production halls. Dariusz Ratajczak, Automation Senior Specialist at Unilever, explains that for a long time the company faced difficulties in keeping and finding employees for monotonous, manual tasks related to packaging and palletizing – tasks that were often also strenuous due to the product sizes handled. Unilever needed a solution automating these processes; however, finding a flexible robot with appropriate payload and reach, as well as intuitive handling and programming was challenging. Particular tasks were to be divided into subprocesses in order to systematically automate individual phases, freeing people from strenuous tasks and involving them in more value-added ones.

„Each year a decreasing number of people apply for positions related to palletizing but in our plants this is a key process which has to be performed efficiently,” explains Dariusz Ratajczak, Automation Senior Specialist at Unilever. “For packaging we needed a robot with enough reach of the arm. The task that the robot needed to fulfill consisted in picking various boxes with tea and placing them on a pallet.”

„We considered many solutions, but finally we decided to test robots by Universal Robots,” says Dawid Mroczek, Automation Specialist at Unilever, detailing how a UR distributor contacted Unilever and showed his team the capabilities of collaborative robots while demonstrating the way they work and how to program them.

The UR10 cobot, with a reach of 1300 mm and payload of 10 kg, was comprehensively tested in the Unilever plant in Katowice. While performing the task of tea packaging, a vacuum gripper was used. The tests went very fine, to such extent that the company decided to deploy UR10 cobots. Implementation of the first cobot was done by a Biuro Inżynierskie IEC company and took around 3 weeks. The basic training for the automation team of Unilever related to programming of robots was given by distributor of UR cobots, Encon-Koester (rebranded to ProCobot).

Unilever fully automated two production lines in Katowice where six UR10 robots now handle tasks related to packing of the tea. Before implementing automation, all these tasks had been performed by a human. Operators spent around 70% of the time packaging and 30% palletizing. With the palletizing now entirely automated by the cobots, the operators have been freed up from 30% of the tasks. Cobots perform the most tiresome works and are also very efficient, palletizing around 1100 boxes during an eight hour shift. In the process of palletizing, each box is placed on the pallet by the UR10 according to a predefined pattern.

„Implementation of the first UR cobot took about 3 weeks,” recalls Dawid Mroczek. “Now it can be deployed in just a few hours. The programmer’s task is to define the boxes’ picking points and boxes’ sizes.”

At the Unilever factory, the robots’ programming depends on the shape and size of cardboard packaging. However, in all cases this process is similar. After reaching the specified number of boxes on the pallet, the UR10 starts the next layer. The pallet usually contains six to ten layers and has ten to twenty one boxes in each layer. When the packaging process on one layer is completed, the cobot calculates the new height and marks the starting point for the next one. When the operator notices that the UR10 begins to stack cartons on the next pallet, he departs with the already loaded pallet. Completing the pallet takes cobot about 20 to 30 minutes.

“My first experience in robot programming was achieved through the UR Academy website. In our team, we exchange experiences and systematically increase the complexity of the functions used with more advanced scripting programming,” says Dawid Mroczek. “Programming at the basic level is extremely intuitive. Currently, we use mainly advanced scripting programming, because it allows us to speed up and unify the creation of programs which is achieved by defining ramps and sizes of boxes in the program.”

Before implementing UR cobots, Unilever automation specialists considered a ready-to-use solution such as palletizing robots. Taking pros and cons into, the team decided that cobots would be more flexible, easier to use and would deliver a quicker return on investment. “Deployment of UR10 cobots enabled us to reduce the packaging time while improving the work ergonomics considerably. Before automation, employees had to perform monotonous tasks involving bending over to place boxes on lower layers of the pallet. This hardest activity was totally eliminated by UR robots,” says Dariusz Ratajczak, adding that the estimated return on investment on the UR cobot is around 12 months.

Implementation of collaborative robots is also being considered at other Unilever plants with automation specialists from Katowice willing to share their experience, explaining how they solved the palletizing problem with cobots. The Katowice team also works on automating the process of depalletizing, enabling the cobots to pick materials for production. 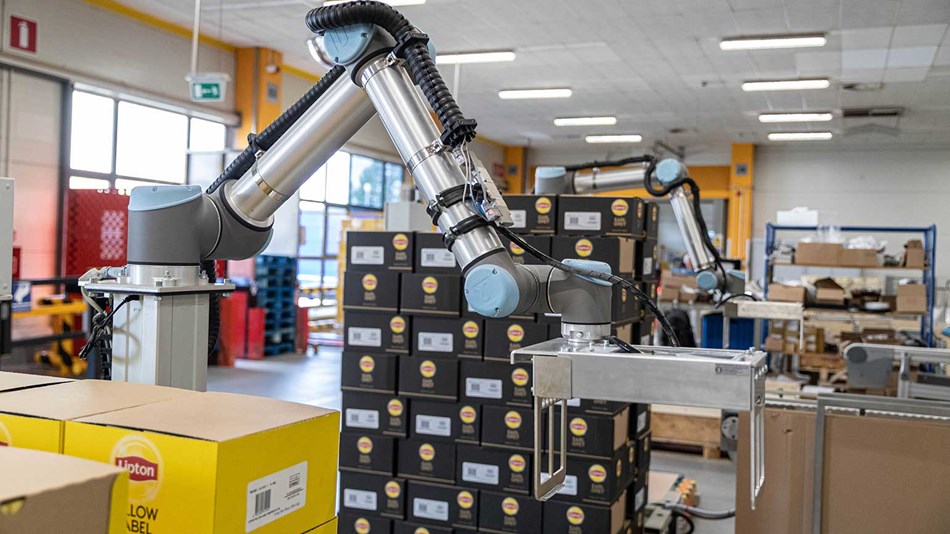 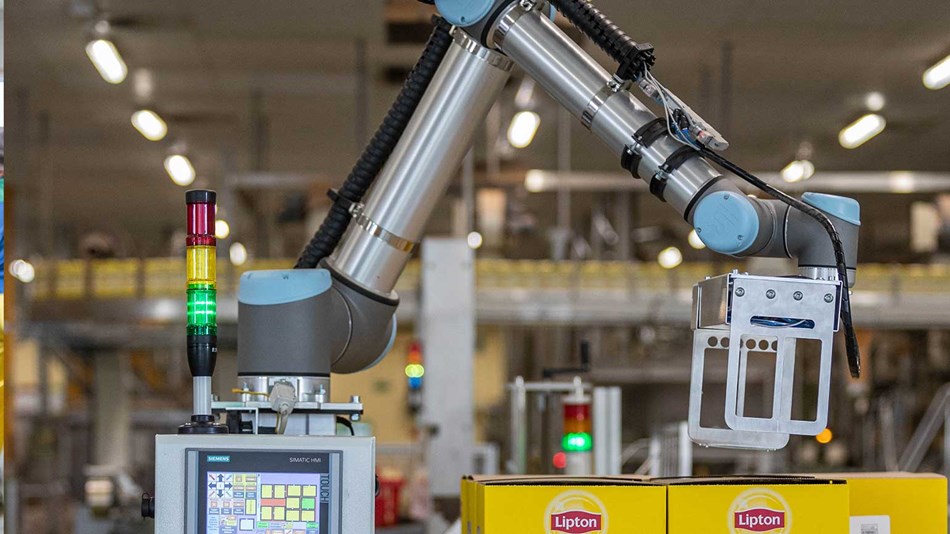 UR10 picks a packed box with tea pouches and puts it on the pallet, relieving employees from a strenuous task 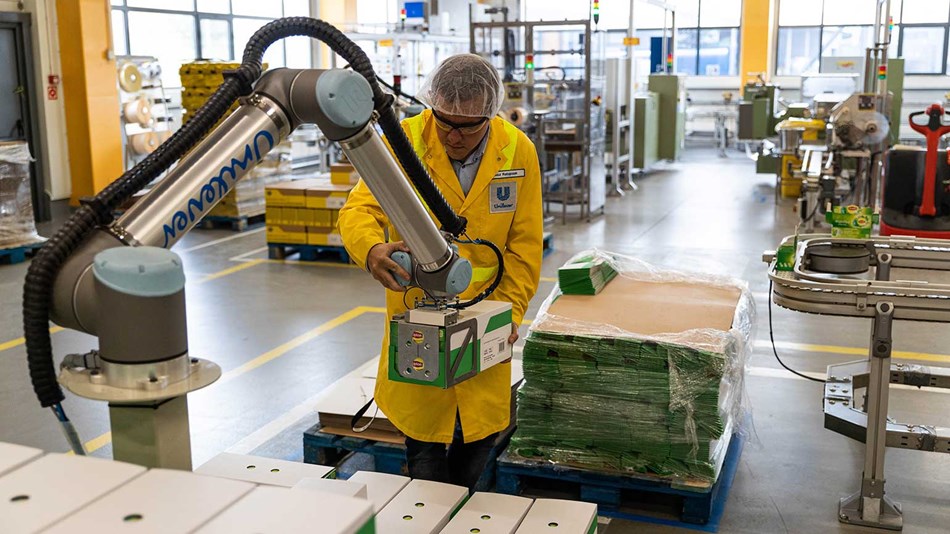 Unilever chose UR10 cobots due to the long reach, big payload, flexibility and ease of use 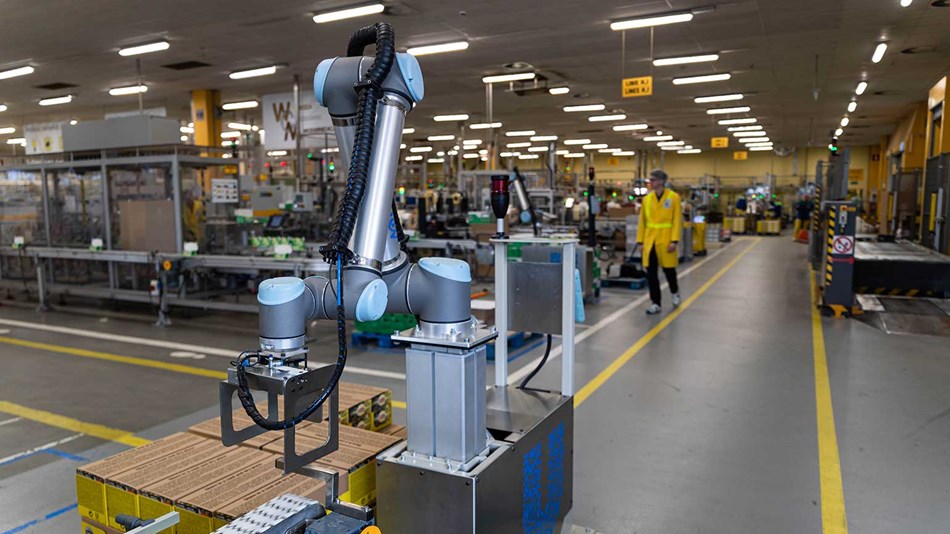 With entirely automated palletizing by cobots, the process speeded up and Unilever employees are moved to more value-added processes