MT Solar is a solar mounting equipment manufacturer headquartered in the picturesque community of Charlo, Montana. The company experiences a 300% jump in demand for its solar mount products every summer but has been unable to find skilled welding workers to handle the seasonal uptick. MT Solar owner and president Travis Jordan was in his office one day, “just scrambling” to deal with the labor shortage when one of MT Solar's welders handed him an article on welding robots. Jordan recalls: “He said 'I really think you should look into this, it would be a good solution for our team.'  And I’m like, 'Well if you got one of the operators saying you need to look into robotics, you’ve got a reason you should be doing something here.'”

At that point, MT Solar’s lead times were two to three times what they were supposed to be. “It’s hard to find good, skilled people that are willing to come up here and work,” explains Jordan. His hiring woes reflect a national trend; the American Welding Society predicts a potential shortfall of 400,000 welders by 2025. MT Solar researched conventional welding robots but found them best suited to huge batches of the same item and lacking in flexibility.

Finding a flexible automation solution was crucial for MT Solar as the company makes many different types of mounting parts, often in high mix/low volume batches. Jordan explains: “Think of us as a 'Solar Ikea,' if you will—where all the pieces have to go out to the customer to be assembled in the field. If I don’t have all the other parts that go with it, I can’t ship anything.”

The cost of conventional automation was compounded by the hassle associated with programming and set up, adds Jordan. “At first it might look like a good idea to use traditional robots, but when you look at the time and resources to get them up and running and programming, it was not the route we wanted to take. Conventional robots aren't very flexible. They can’t handle a mixed bag. The envelope is too small. Or the fixturing can’t be manipulated properly, and the cost would have gone through the roof,” says Jordan, adding that the company preferred a solution that wouldn’t require safety guarding and that existing operators could handle.

When MT Solar discovered Universal Robots, the paradigm changed. “The big difference is the 'collaborative robot approach' of being able to work with the robot, and it being so teachable and so easy to run,” says Jordan.

While traditional welding robots require safety cages and can look “kind of like a nightmare,” cobots offer safe human-robot collaboration in close proximity without fences, Jordan notes, further increasing the appeal of cobot-powered welding solutions. “When I zoomed in and discovered Vectis Automation’s Cobot Welding Tool powered by Universal Robots, it became obvious that this combination was the right way to go.”

Operators set up the cell with jigs, supply the parts, and program the system through an intuitive 3D interface directly integrated on the cobot’s teach pendant through Vectis’ URCap software plugin supplied. The pendant includes a full weld library developed by Vectis Automation, providing standard settings for common weld jobs, including Pattern and Tack tools. “I am by no means a certified welder,” says Jordan. “I’ll just grab any of the guys out of the shop that are welders, and I’ll say, ‘Okay, I’ll run the pendant. You go ahead and run the torch and put it where you want it. Where do you want the weld to start; where do you want it to stop; what angle do you want it to do?’ And we’ve thought through some very advanced welds.”

DIY programming complete, the robot autonomously runs a full MIG welding cycle. The UR10e welds six to eight parts in each cycle. Typically, these are small parts, including lock collars, beam clamps and weld nuts. The cobot welds these in a predefined order and completes 4-12 parts per run with no batching. When it has completed its welding tasks, humans can reload parts and restart the system, if required, or quickly program a new welding job with fresh parts. The cobot is responsible for welding specific lists of parts every 38 minute takt time shift. Operators work collaboratively with the cobot, loading and unloading during cycles and maximizing the build reach of the machine to cover multiple different fixtures. 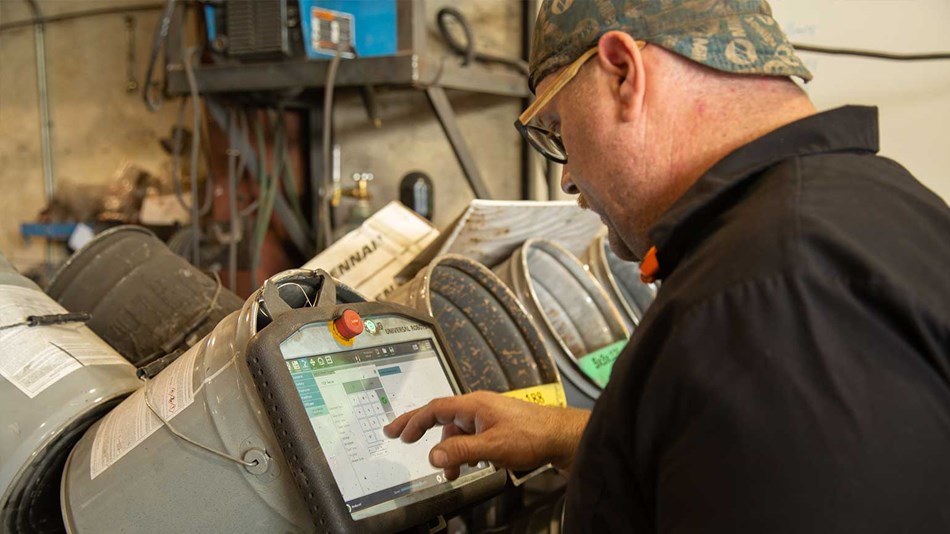 “Most of our shop probably wouldn’t consider themselves a programmer of any sort,” says Mike Gillin, operations manager and certified welder, MT Solar. “But just about everybody out of curiosity has gone by and taken a turn. Our painter comes over and runs the robot sometimes. The nice thing is you don’t have to be a welder necessarily—that part’s already figured out for you.” 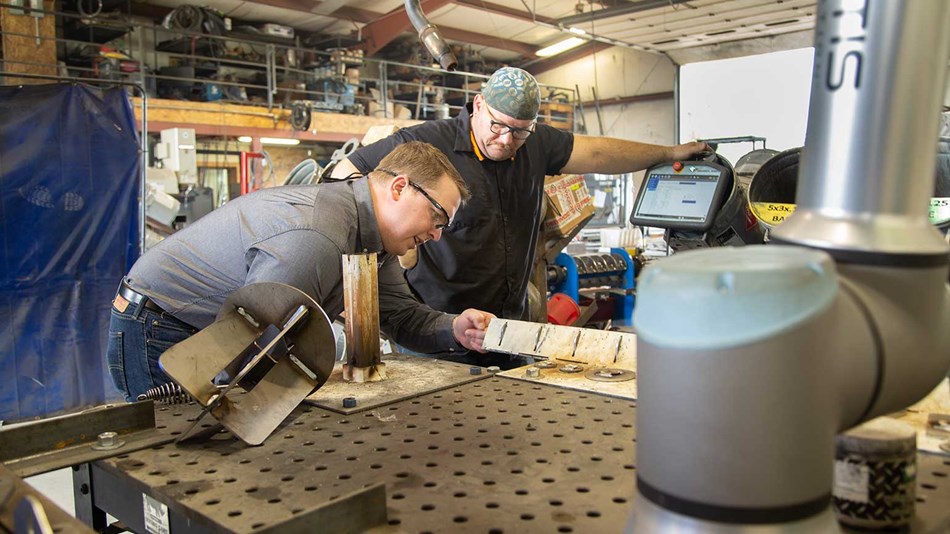 “There’s been a stigma that cobots can’t go into heavy industrial environments, but what our customers are saying and seeing is that that’s not true. They are welding thin gauge materials, all the way down to 16 gauge, all the way up to half-inch and thicker materials,” says Josh Pawley (left), co-founder of Vectis Automation. “Cobots are meant for industrial environments and they can bring the benefits of DIY ease of use, flexibility, a smaller footprint and a lower all-in cost to shops of all sizes. ” 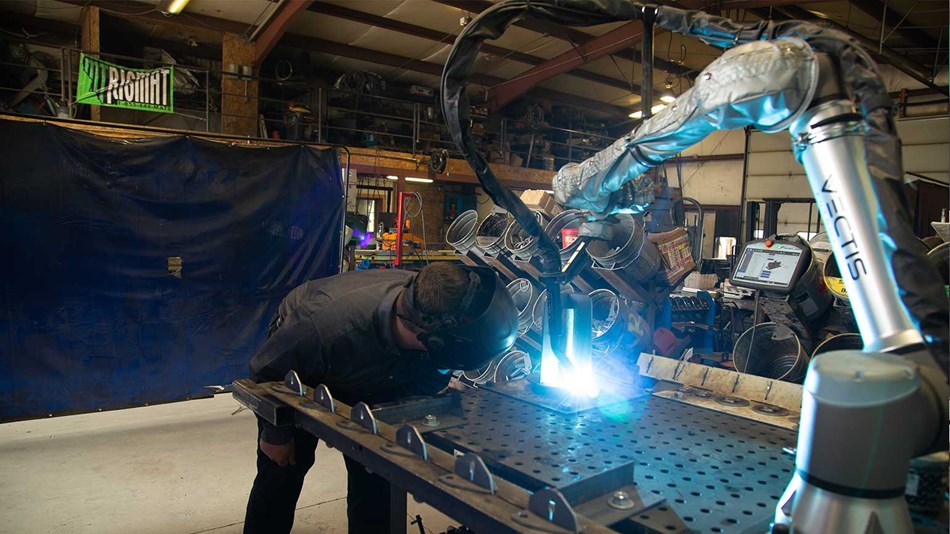 “You can work right beside the cobot as it is moving and welding,” says Travis Jordan, owner and president, MT Solar. “My guys can have their hood down and be right there, changing parts out with no safety guarding and no concerns about safety. They’ve been very, very comfortable working with it.”

Ease of deployment
The enthusiasm in MT Solar had been building prior to the arrival of the cobot, which made for a “very interesting” first morning together, Jordan recalls: “The robot shows up on the truck and of course I’m all excited about it. I walk out of the office and I’ve got employees already cutting shrink wrap off the robot and getting ready to set something up. I was like, 'Hang on! I want to play!' We had production parts running that afternoon,” says Jordan.

The best thing about the system is that you don't have to be a rocket scientist to use it, says MT Solar’s operations manager, Mike Gillin, a certified welder at MT Solar: “I’m a welder by trade, but I didn’t know anything about robots, and I’m not very computer-savvy. Curiosity attracted me to the robot and I was really surprised at how easy it was to figure it out.”

Low barrier to entry
The flexible financing and rent-to-own options offered through Vectis Automation enabled MT Solar to test out the entire system without a large financial commitment at the outset. “This is a system that I can rent or lease for a very short period. I can afford that. If it doesn’t work, I’m not saddled with the thing. It made it really easy for us to get started,” says Jordan. The tangible ROI of the system is clear, since it adds another welder to the team, Jordan adds, which provides “a real clean one-and-a-half, two-year ROI, just on hard number labor savings.” The intangible ROI is “probably even more valuable,” notes Jordan, because the cobot has had “such a far-reaching impact on both customers and employee morale.”

Repeatability, improved quality & competitiveness enhanced
Human welding can accommodate –and introduce-- a lot of variance, says operations manager, Gillin, especially when it comes to monotonous work and relying on the ‘calibrated thumb.’ “We’ve built up to 7,500 small parts over a winter. For an operator to sit and do that; you can tell where they’ve gotten sick of it, and some of those parts end up being scrapped,” says Gillin. The cobot welder now performs that repetitive work.

For owner Jordan, the system offers the repeatability that manufacturers crave and helps MT Solar maintain consistent product quality: “Our customers are always excited when we tell them, ‘Hey, you know, that part was welded on a robot.’ They go to put it on, and it looks exactly the same as the last one and they look high quality,” says Jordan. “I think Universal Robots’ system with Vectis is the best one I’ve run across. It’s wonderful.”

Furthermore, the consistency and flexibility of the system enables MT Solar to compete with large corporations,” says Jordan. “It allows us to combine industrial quality and scalability with the innovation and the nimbleness of a small company, which we think is an extremely powerful combination.”

MT Solar plans to acquire more cobots soon for new tasks such as manipulation of heavy and larger parts, which will also alleviate some of the lifting performed by employees. As operations manager, Gillin puts it: “We’ve got a shop full of people that will come up with ideas just based on their exposure to it.”

“When I zoomed in and discovered Vectis Automation’s Cobot Welding Tool powered by Universal Robots, it became obvious that this combination was the right way to go.”
Travis Jordan Owner and President, MT Solar 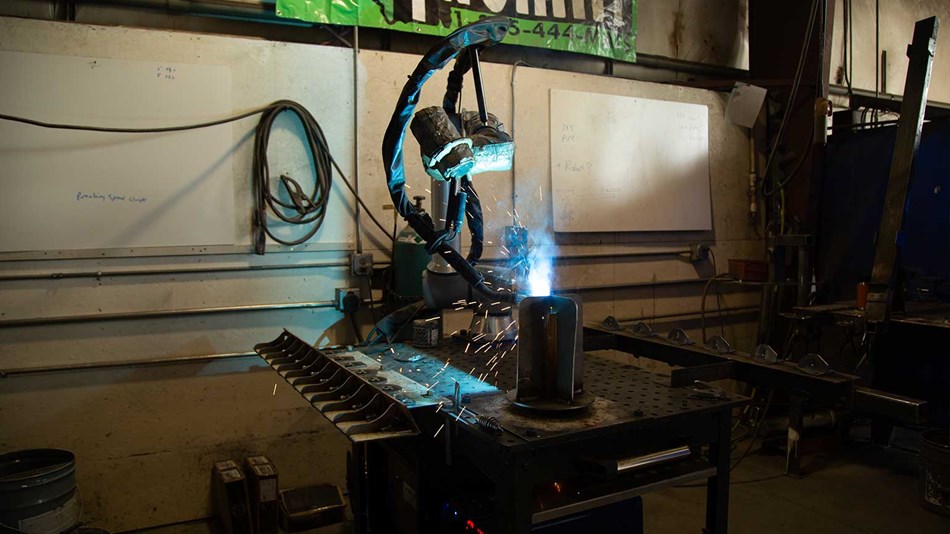 The cobot has led to fixturing improvements, since employees no longer rely on “the calibrated thumb” to hold parts in place, says MT Solar’s Gillin. “The cobot does it. It forces us to be better and removes variance, which is the name of the game in paced production. We can’t have rejects and we can’t have variance in cycle times.” 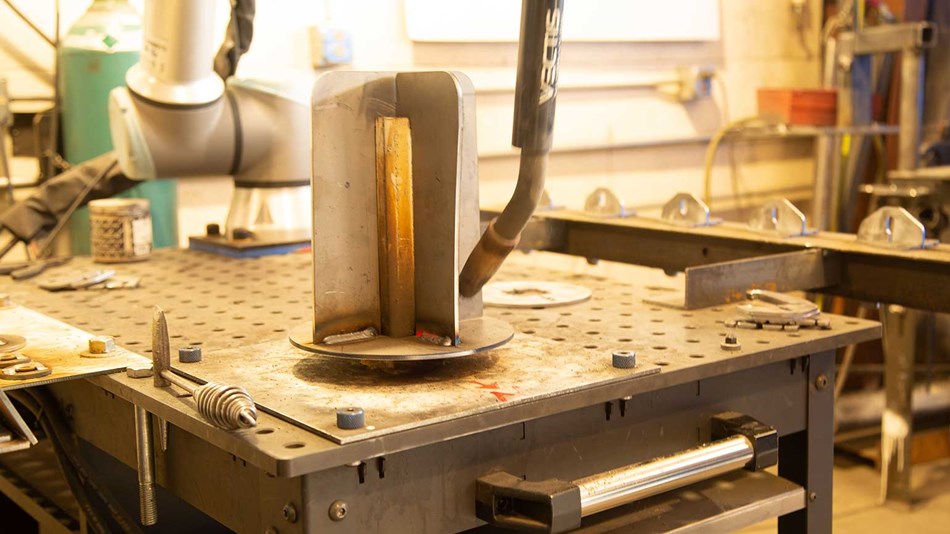 The system has become a recruitment tool for MT Solar owner and president Travis Jordan: “Attracting younger quality talent is a challenge in rural environments. So, it's really important to have things to bring to the table as an employer and we find that there's a real sparkle in people’s eyes when we tell them we have a robot on the crew.” 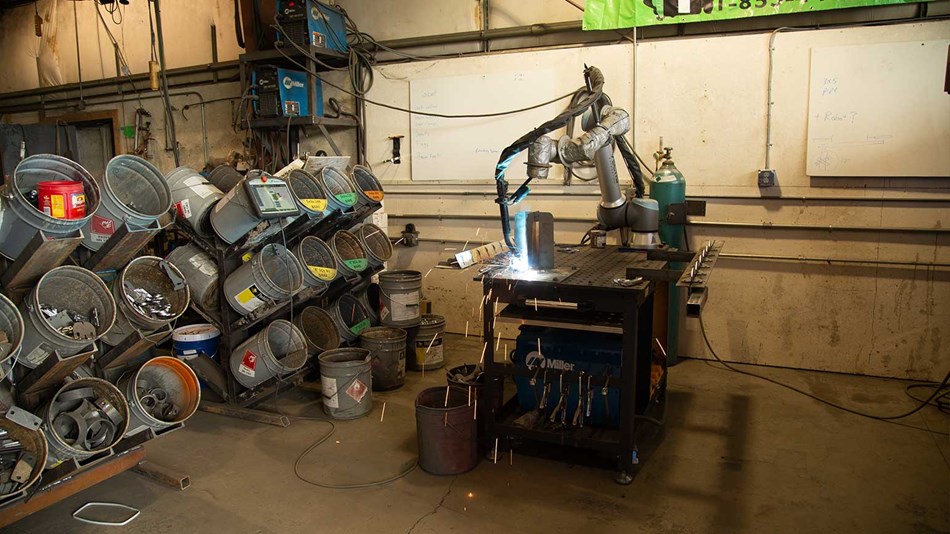 “We plan to run six cobots eventually,” says MT Solar’s Jordan. “Having a system that’s easy to program, very flexible and doesn’t have to have guarding and safety restrictions around it, is tantamount to being able to replace, add to and work together with employees.” 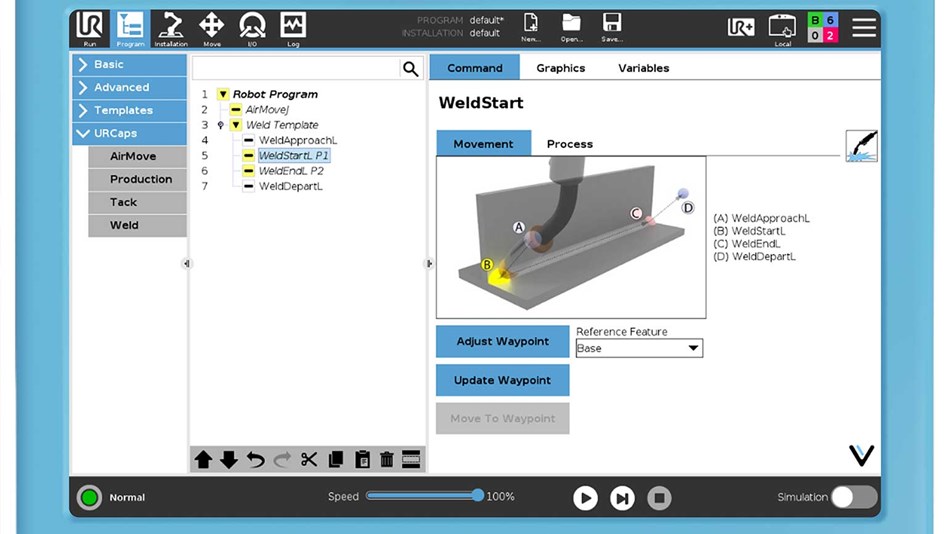 The Vectis Cobot Welder is a ready-to-weld UR+ Application Kit powered by Universal Robots' UR10e. UR+ Application Kits provide hardware, software and components designed to streamline deployment of the most popular cobot applications. Designed to boost productivity by reducing the learning curve, deployment time, risk and cost of robotic welding, the Cobot Welder comes with an intuitive interface directly integrated to the UR cobot’s teach pendant (pictured) that allows end users with no robotics experience to program the system.