Engmark Meteor machine manufacturing has deployed collaborative robot arms from Universal Robots to perform all the heavy lifting and repetitive movements in its production of griddle frying pans. The cobot installation has provided a good working environment for the staff of six employees – while helping the company compete with manufacturers in low-wage countries, enabling it to keep the entire production in Oslo.

Engmark Meteor specializes in manufacturing griddles, which are large open frying pans, with or without sides connected to a power source. The griddle is part of an ancient culinary tradition in Norway and is used to make traditional Norwegian flatbread and other baked goods such as pancakes, tortillas or pita bread.

It is important for the long-established company to keep its production in Norway, despite competition from countries with significantly lower production costs, and to offer its employees optimal working conditions.

“We’re competing against people who earn 5 kroner (0.50 Euros) per hour. At the same time, we want to spare our employees the arduous task of having to lift the griddles four times before we pack them on pallets,” says Håvid Engmark, owner of Engmark Meteor.

Meteor manufactures the griddles from scratch in a very high-tech production process. A total of six cobots, two UR10s and four UR5s, from Universal Robots have been implemented since 2010 and now lend a hand with the production at strategic points where previously an employee handled metal sheets or finished griddles.

Håvid Engmark first saw Universal Robots’ cobots at a trade fair – enthusiastic about the innovative technology, he bought one, programmed it with the knowledge he had from high school and implemented it into his company. Since then, another cobot has been added almost every year to further optimize production processes.

One UR10 is significantly involved in the cutting of round, shiny metal parts. The cobot loads and unloads the laser machine, positions the work pieces, and finishes them by brushing them off. At another part of the production, a UR5 loads a press with reflectors, each weighing 2 kilograms, and removes them when the process is completed.

A third robot from Universal Robot washes and packs the finished griddles: The UR10 cleans the product by pressing all sides against an alcohol-soaked sponge, rotating the griddles accordingly. The product then air dries.

In the same step, the same cobot applies a thin film of oil to the surface of the griddle, wraps a plastic film around it and places it in a box. The operator then closes the lid of the box so that the robot can seal it with a standard tape machine. Finally, the cobot palletizes the finished packages in a specific pattern and via a pop-up on the cobot’s teach pendant informs the human colleague when the pallet is full. All sensors are controlled by the UR robot.

The inclusion of collaborative robotics into this process means a huge relief for the employees: Before they had to handle the product four times – as every griddle weighsten kilograms this meant an immense physical strain.

Håvid Engmark is the third generation at the factory. He is proud of his niche business and excited about his cobots. “I saw a robot like this for the first time at a trade show in 2010. I bought it and took it home, and after an hour it was already up and running in production. Since then, I’ve bought a new robot almost every year,” says Håvid Engmark, who  believes the cobots have been a huge benefit for the company.

“If you can find enough work for it to run all the time, it can pay for itself in a few months. You can program it yourself, and it’s really easy,” stresses the griddle manufacturer. There is no doubt in his mind that the collaborative robots are helping to safeguard the future production of traditional griddles in Norway.

“If you can find enough work for it to run all the time, it can pay for itself in a few months.”
Håvid Engmark Owner, Engmark Meteor AS 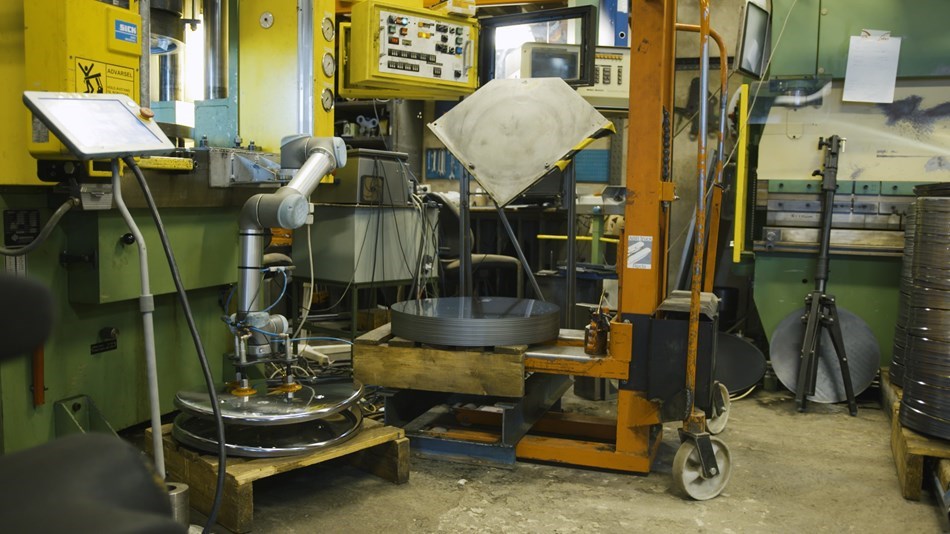 Feeding and picking of components in a 200-ton press. 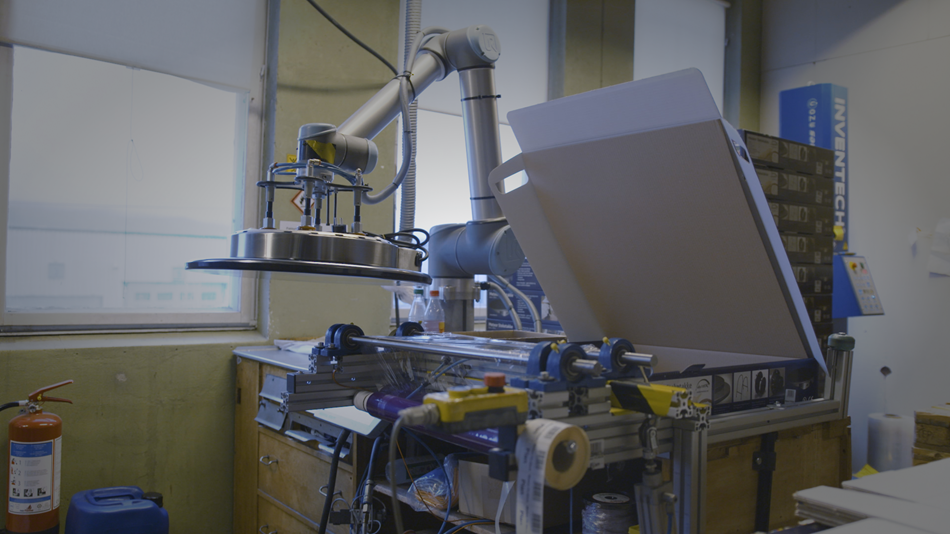 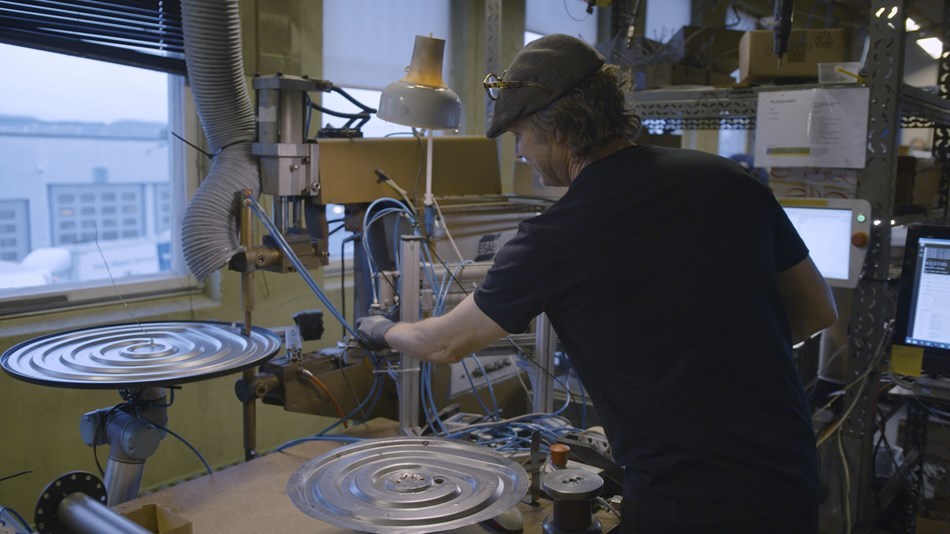 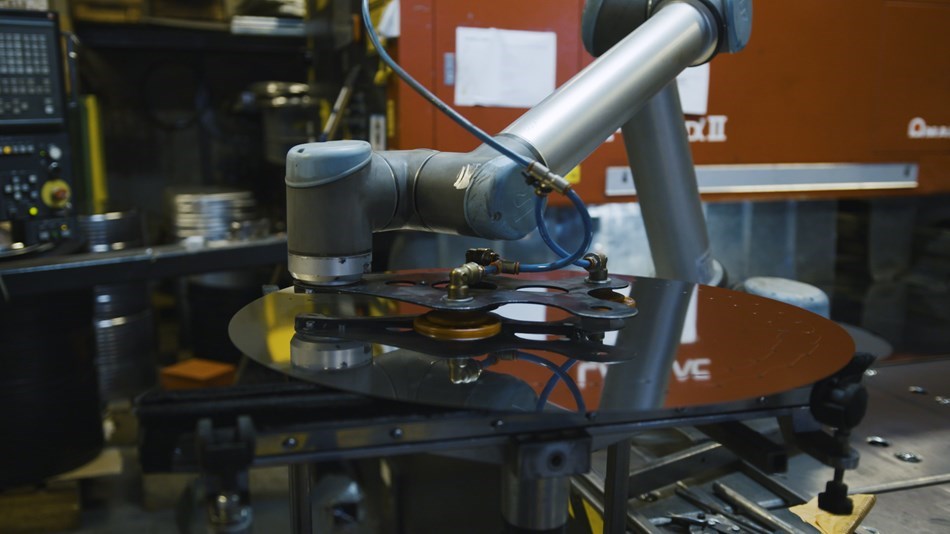 Selection of parts from the laser cutter. The cobot brushes off the parts and places them on a pallet.

Engmark Meteor AS was founded in 1928 by Magnus Engmark. The company’s Meteor griddles are produced by six employees at Kalbakken in Oslo. Most of the production is sold on the Norwegian market, but around 10% is exported, mainly to the other Nordic countries. The griddles are 100% recyclable. Meteor griddles are available in two sizes, 46 cm and 60 cm, with or without sides. The frying surface is iron and has no coating that can come loose.