Success That Sticks:
How UR Cobots Optimize Glue Dispensing In Door Knob Assembly

Emtek, a Los Angeles-based door hardware manufacturer, was looking for a more consistent way to handle glue dispensing in manufacturing door knobs. A UR5 from Universal Robots now dispenses the glue with speed and accuracy, working in perfect collaboration with the operator who places the knob on the stem after the glue is applied. The tandem effort has doubled production output per man-hour on the high mix/low volume production line

Emtek has been making a wide variety of door knobs for more than 30 years. Unlike many of the company’s competitors, Emtek is a highly specialized manufacturer with a typical production run of only 40-60 items with frequent change-overs. Not a production that typically lends itself well to automation with traditional industrial robots.

Vice President of Engineering at Emtek, Birk Sorensen, first heard of Universal Robots from its parent company, ASSA ABLOY, that already has UR cobots working in factories in New Zealand and Romania.

“They suggested that if we were interested in robots—and we were encouraged to get into robotics—that Universal Robots was a good collaborative robot.  It had the ability to work very closely with an operator in the same vicinity,” says Sorensen. “It did not need to be fenced off and we could quickly change programs between production runs. This collaborative approach has doubled our daily throughput per man-hour.”

The engineering team was surprised at the ease of installation that took about a week for the cell to be fully operational. “It was incredibly simple. It did not require all the heavy-duty programming we have with our CNC machines,” says Sorensen, whose team had no prior experience with robotics.

One of the production challenges now solved with the UR cobot is controlling the volume of the epoxy and the consistency of the dispensing. A task that had proved challenging to do with manual labor.  Another challenge was troubleshooting rejects. “By having the Universal Robot dispensing the proper amount of glue, it just standardizes the whole process,” says Edgar Medina, Director of Production Operations at Emtek. “Now we can go back to the robot and look at the programming, the dispensing, the whole process. It’s under a controlled environment and we can pinpoint the issue right away.”

Emtek’s UR5 typically dispenses glue about seven hours every day. “In many cases we use the same pallet; but we just change the program and instead of using knob “A,” we would then turn to knob “B,” and maybe two hours later we’ll shift again to knob “C.”,” explains Sorensen, adding that Emt currently stores seven different programs on the robot. “The operator simply picks the correct program and the robot is up and running. It really is that simple.”

Emtek is part of ASSA ABLOY, the leading door opening solutions company in the world. Founded in 1981, Emtek has decades of experience creating door hardware. Each order is custom assembled at the company’s Southern California facility. There is no predetermined combination of knobs, levers, rosettes and finishes; Emtek lets customers mix and match according to their own taste.
www.emtek.com 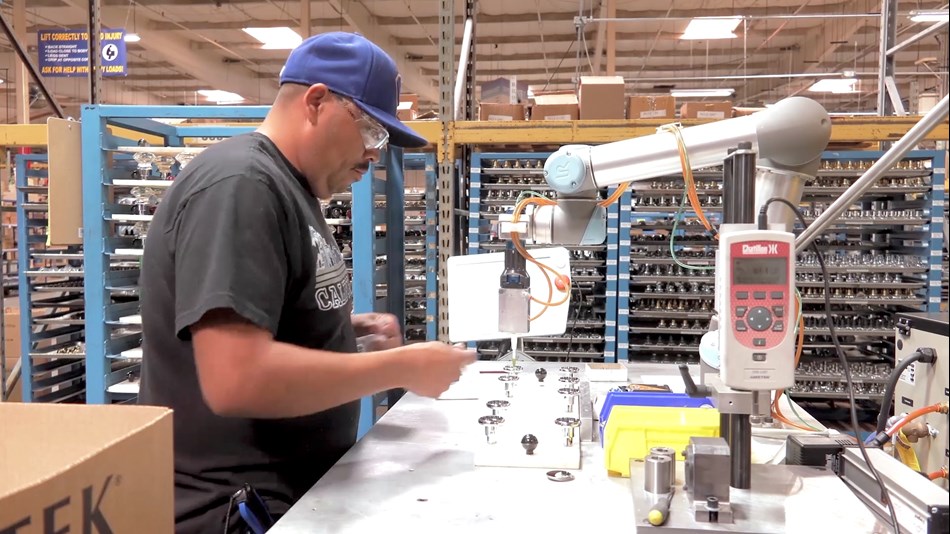 The UR5 cobot and the operator work in tandem, doubling the production output per man-hour 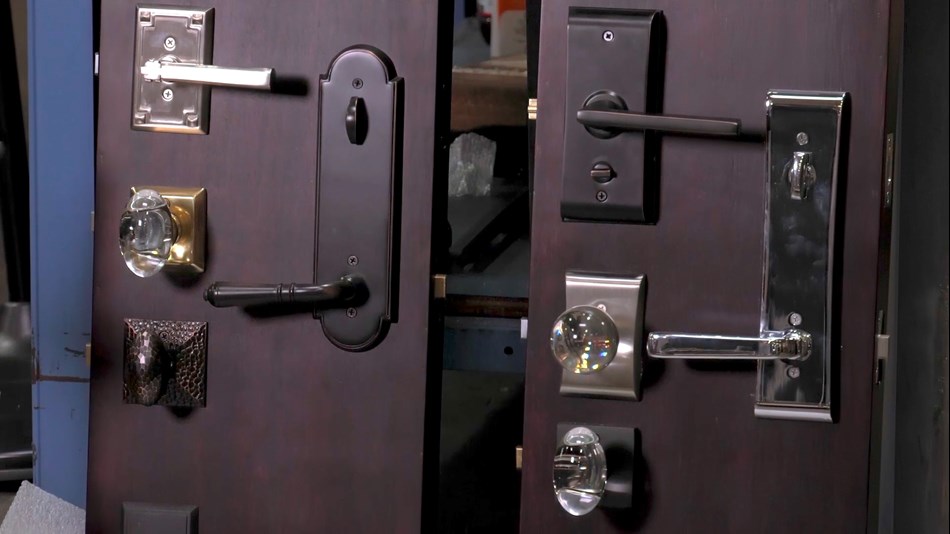 Each EMTEK order is custom assembled at the company’s Southern California facility. There is no predetermined combination of knobs, levers, rosettes and finishes. 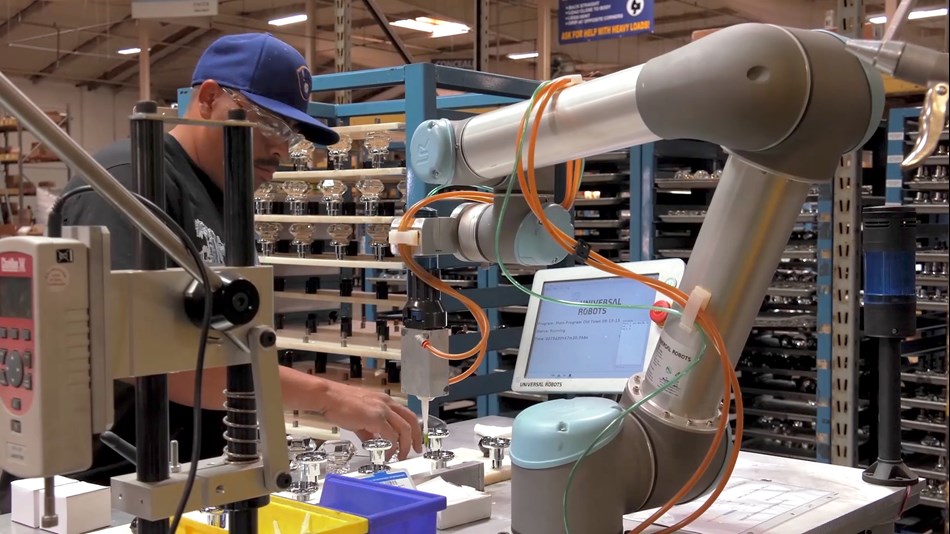 The UR5 dispenses glue into the stem of the door knob, followed by the operator placing a mirrored disk on top. The robot then dispenses a second round of glue on top of the disk and the operator completes the process by placing the glass knob on top. 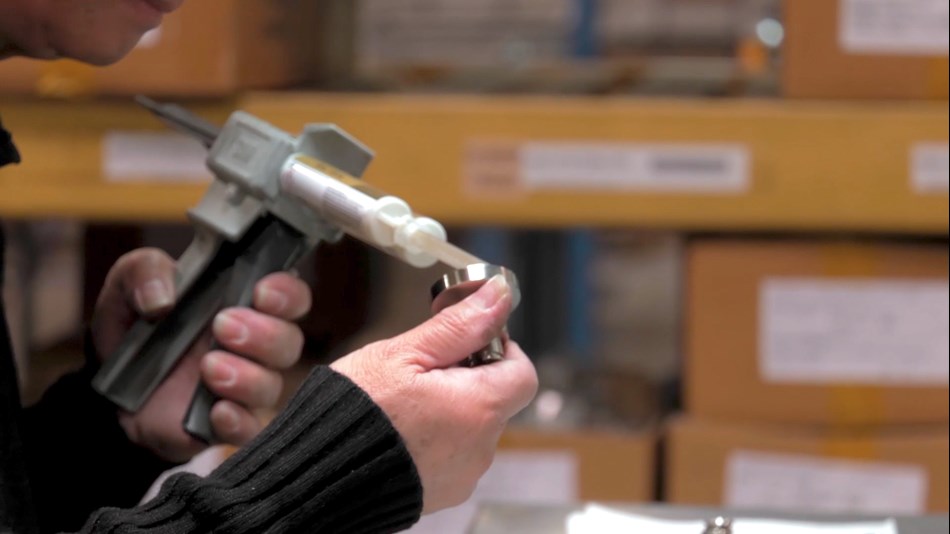 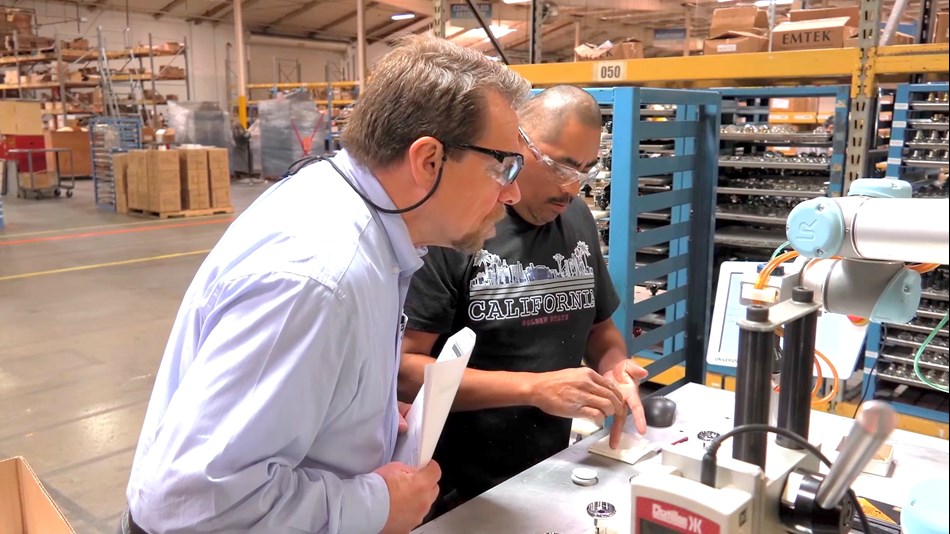 Birk Sorensen(left), VP of Engineering at EMTEK, oversees the gluing process. “The return on investment was just shy of 12 months, so it had worked out to be very advantageous for us,” he says. 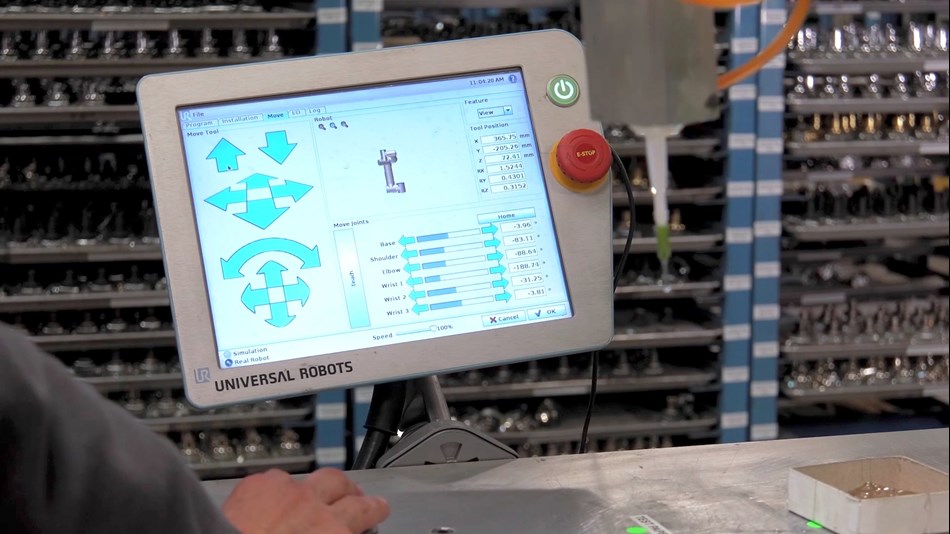 Universal Robots pioneered the 3D interface on the touch screen pendant that the UR robots are programmed through. 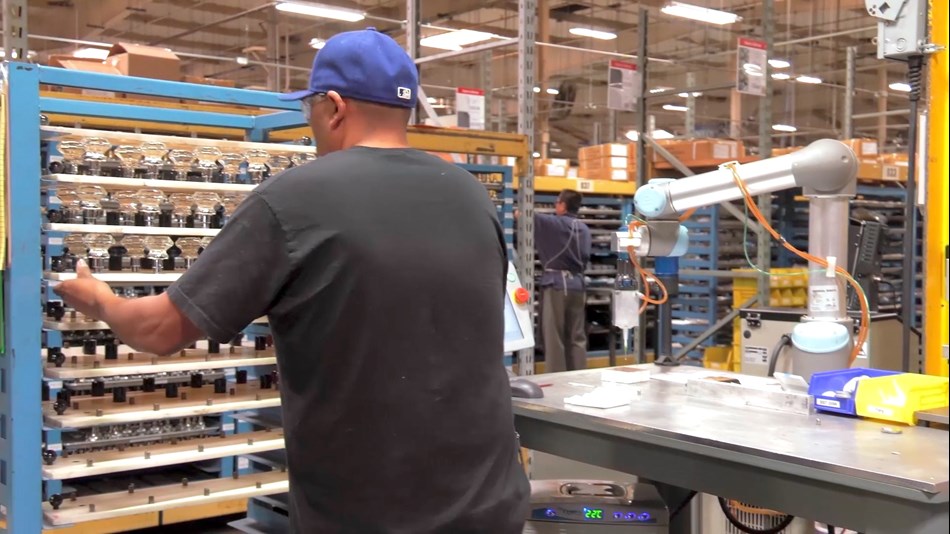 A typical production run at EMTEK is only 40-60 units, so each shift requires numerous change-overs. 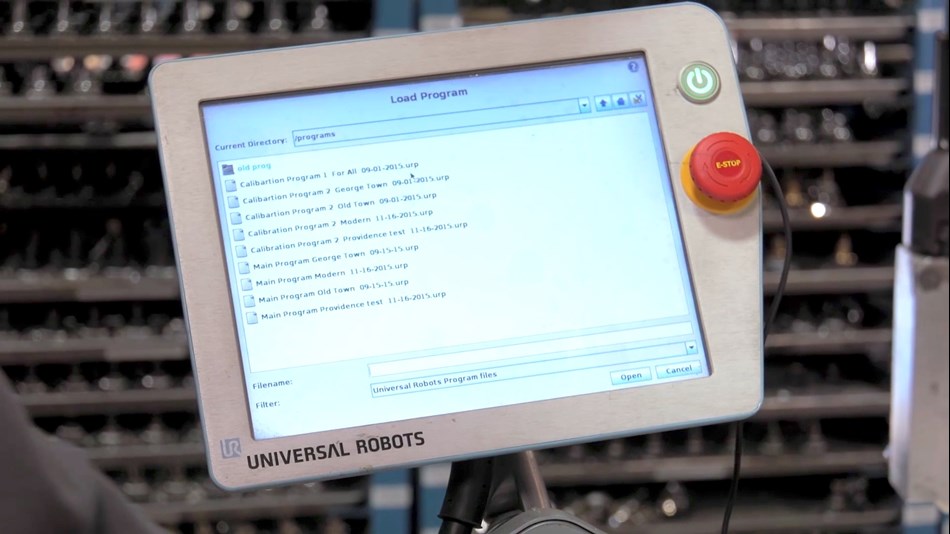 Programs for gluing each different knob is stored on the touch screen and is easily loaded. 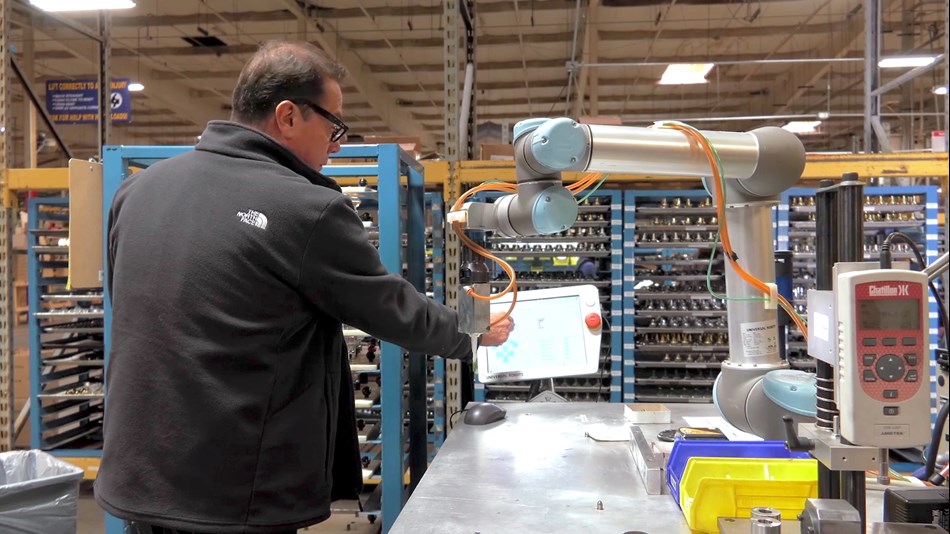 “We were surprised at the ease of programming the UR robots. It did not require any heavy-duty programming like our CNC machines,” says Birk Sorensen, VP of Engineering at Emtek.