BWIndustrie is a company specialized in industrial degreasing and machining of mechanical parts. For the past eight years, the company has used Universal Robots’ cobots to improve several of its manufacturing processes.

Four robotic arms from Universal Robots (one UR5, two UR10 and one model of the new UR16e) are deployed on  production lines. The cobots handle tasks such as loading and unloading of CNC lathes, quality control of metallic tubes and deburring of metal parts ranging from 4 to 14 kg.

Using cobots from Universal Robots enables BWIndustrie to maintain  competitiveness and increase its workforce by 50% and  revenues by 70%. The company has also been able to reduce the risk of muscoskeletal disorders (MSDs) among employees, ensuring a healthier working environment.

BWIndustrie is an industrial SME located in Moselle, in the Eastern part of France. Eight years ago, the company was facing increasing competition. In order to save itself from relocation, BWIndustrie decided to embrace automation. The company first deployed traditional industrial robots requiring safety caging, but wanted the operators to have  access to the robots during production. The company was looking for a collaborative robotic solution that was intuitive and simple to implement. With an easy-to-use cobot, operators could be trained quickly and take care of day-to-day maintenance. In this context, BWIndustrie acquired its first UR5 cobot.

Subsequently, with the expansion of the Universal Robots product line of cobots, BWIndustrie deployed two UR10 cobots and developed machining cells for different applications. Recently, in order to meet customer demands for deburring of heavy metal parts, BWIndustrie became the first company worldwide to integrate the latest addition to the Universal Robots range: the UR16e.

In 2011, BWIndustrie contacts Sysaxes, a distributor of Universal Robots, to assist with the integration of its first UR5 cobot. The goal was to replace an obsolete traditional robot installed in 2008, that was in charge of handling light parts. Following the success of this first operation, the company decided to invest in three other UR cobots, carrying out CNC machine tending, deburring and quality inspection. .

The first application carries out the loading and unloading of a CNC lathe. The second performs a similar task with a vertical lathe as well as quality control of the parts. These robotic cells, equipped with cameras, free up the operators' time so they can focus on higher value-added tasks. In both applications, the cobots carry dangerous and/or sharp parts. The area was therefore secured via laser safety scanners that make the cobots stop if a person is detecting entering the work envelope.

On the third application, the cobot helps in the quality control of hundreds of thousands of metal tubes per year. It presents them in front of two high-definition cameras , which inspects the dimensional characteristics of the extruded tubes. If the inspection fails, the cobot places the part in a reject box. All these inspection operations were previously carried out manually before the arrival of the cobots..

In 2019, in order to keep pace with its growth and meet customer demand, BWIndustrie successfully installed the latest addition to the e-Series range, the UR16e, in just two weeks. This allows the company to automate the deburring of castings part weighing between 4 and 14 kg. The cobot handles nearly a ton of metal parts per day.

The cobot is placed in a semi-open cell on which several deburring tools (milling cutters, belt grinders, grinding wheels…) are affixed, including pneumatic grippers. A specific zone allows the cell to be supplied with parts to be deburred. The UR16e picks the workpiece with pneumatic grippers and presents it to the deburring tools. The operation takes less than a minute and the part is then placed back in the specific location for the parts to be treated.

The Remote TCP functionality of the e-Series products line, combined with the natural flexibility of the cobot, makes the programmation of the cobot very quick, using an external tool by reproducing the complex operator gesture. The cobot can then be reprogrammed to process a wide range of products, including parts that vary greatly in size, design and weight. Because of this, the learning time on a new complex part has been reduced by a factor of five. In addition, employees previously assigned to this tedious task can now take on more rewarding and less MSD-prone activities, such as machine control and quality control. 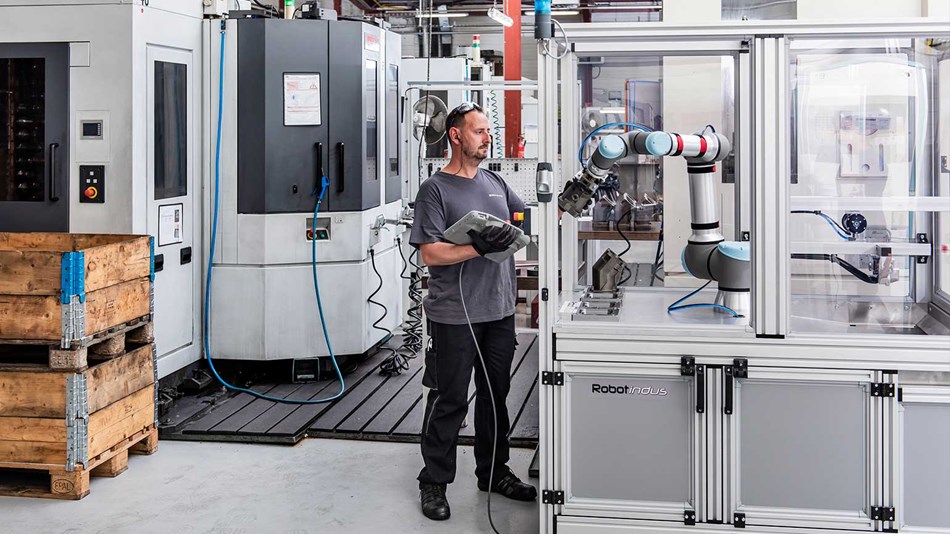 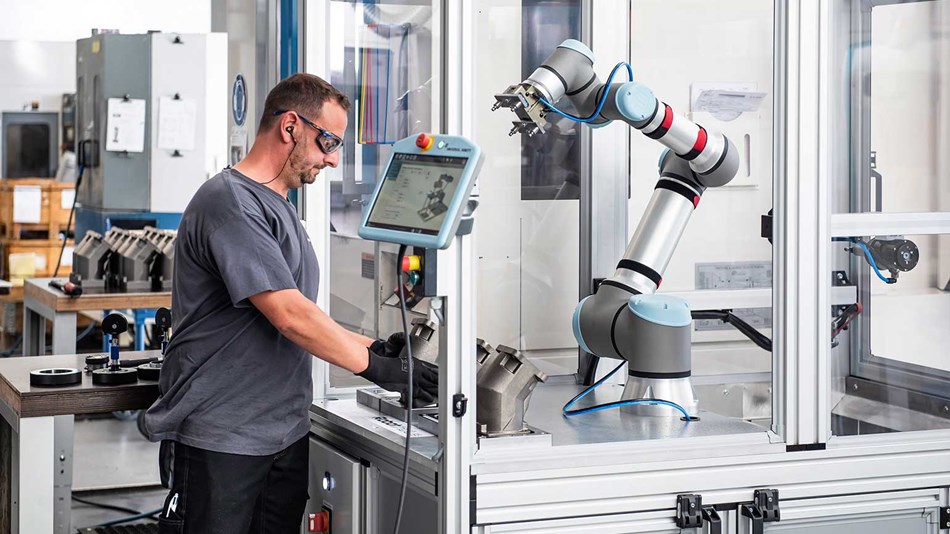 The ease of use of Universal Robots' cobots encourages the company to regularly redeploy them on the production line to meet changing needs, supporting the evolution of BWIndustrie's product range. The company reprogram them often as new orders are received. Over the years, the company has developed expertise in programming Universal Robots cobots and fully supports the integration of new applications.

The cobots also improved the reliability of the quality control operation of hundreds of thousands of parts per year.In the deburring process, the cobot’s perfect repeatability guarantees consistent quality.

The benefits in terms of ergonomics are important: on the quality control application, the cobot has eliminated the MSD risks associated with repetitive movements. The deburring robot avoids operator exposure to grinding dust and reduces the load carried by operators. "We can talk about immediate ROC - Return On Comfort - for all the applications that relieve operators' MSDs," explains Laurent Wagner, CEO of BWIndustrie.

The Return On Investment of the installations is less than 12 months. A record of 6 months was reached in 2015 on a loading robot working on three shifts.

Productivity gains have enabled BWIndustrie to keep its production in France and to win new markets. Since the first cobot installation in 2011, the company has increased its workforce by 50% and its turnover by 70% to reach 5.6 million euros annually.

The future of BWIndustrie will be propelled by collaborative automation : "These successes encourage us to continue with cobots., We will install two new Universal Robots in the next half year" concludes Laurent Wagner. " Universal Robots' cobots give us a technological edge with our customers, whose confidence now opens up much larger markets for us.”

“"Since our first cobot installation in 2011, our workforce has increased by 50%, and our revenues by more than 70%."”
Laurent Wagner, CEO of BWIndustrie

Founded in 2009, BWIndustrie is a company based in Moselle in the Eastern part of France,  employing 45 people at its Sarrebourg site. The company is a subcontractor in industrial degreasing and a machinist of mechanical parts in series, produced on CNC machine centers. The company has many customers in various fields such as automotive, hydraulics and electronics.