Meet the new assistants in Medical Device Manufacturing – the Cobots 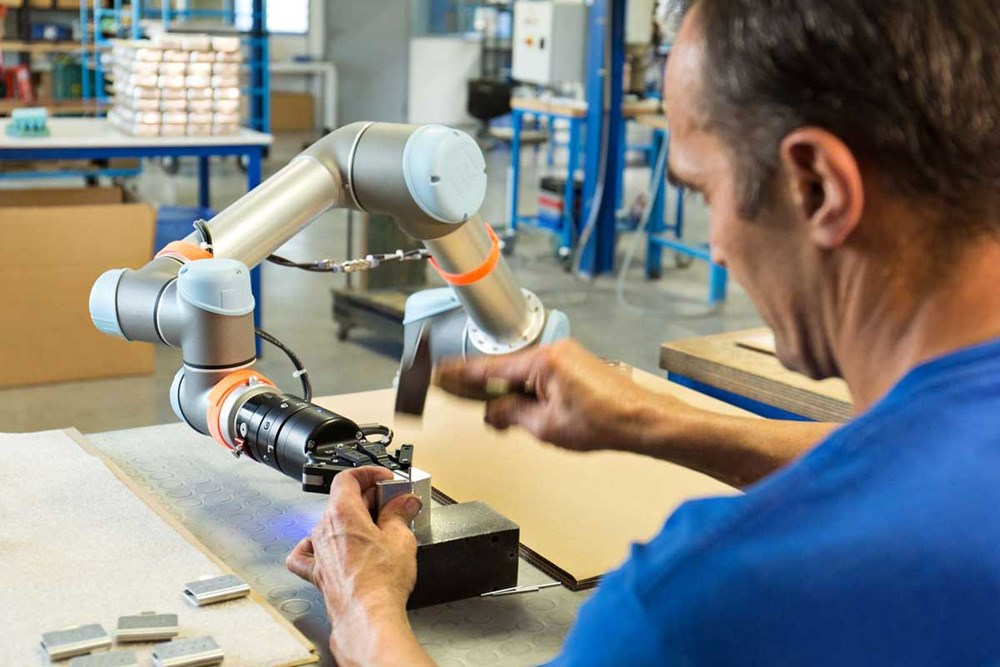 Collaborative robots or “cobots” are a new class of robots that are bridging the gap between fully manual assembly and fully automated manufacturing lines. This has become a critical competitive advantage for small and mid-sized specialty medical device manufacturers and is helping to fill automation gaps for larger OEMs with processes that couldn’t be cost-effectively automated in the past. In this blog-post, readers will learn how cobots differ from traditional industrial robots and will see how three different medical manufacturers have increased production, improved quality, and reduced costs with collaborative robotics.

When small and mid-sized medical device manufacturers envision a robot, many think of either huge industrial robots working in fenced-off areas in large factories or futuristic cyber bots mimicking human behavior. But between these two scenarios lies a new emerging reality: A class of robots dubbed collaborative robots—or simply cobots—are bridging the gap between fully manual assembly and fully automated manufacturing lines. This new technology is filling automation gaps for larger manufacturers that have processes that couldn’t be cost-effectively automated in the past and is bringing the advantages of automation within reach for even small, specialty manufacturers.

According to the old rule of thumb, the cost of a robot should be equivalent to one worker’s two-year salary. But collaborative robots are closer to one-fourth that price. The capital costs for traditional robots account for only 25 to 30 percent of the total system costs. The remaining costs are associated with robot programming, setup, and dedicated, shielded work cells—costs that are generally not needed with cobots. With affordable upfront costs for a cobot, small and mid-sized manufacturers typically see ROI in less than a year—sometimes significantly faster.

Dynamic Group is a privately owned, Minnesota-based contract manufacturer that specializes in complex injection molded plastic components and assemblies for the medical and electronics industries. With the challenge of low unemployment and high wages, the company looked to automation to improve its competitiveness. A cobot tends a complete injection molding machine cycle for a medical device with extremely heat-sensitive components: it picks and places “book frames” that hold pieces to be molded into the injection molding machine, transports the units to a trimming fixture, places the part in front of an operator for further handling, and finally pushes a button to activate the cycle again.

CEO Joe McGillivray said, “We were having trouble making one good part with manual labor, let alone the various shifts tending the machine cycle differently. Universal Robots’ UR10 robot arm gave us a perfectly consistent cycle. We went from having three operators on a single shift to being able to run three shifts per day with just one operator per shift. So we essentially quadrupled our production capacity and our scrap went from significantly high to near zero.”

Dynamic Group deployed two additional cobots to transport delicate parts to degating and human inspection and for a kitting application that picks and places sterile wipes and saline solution into a clamshell container and pushes the loaded shell onto a conveyor—a task that previously required six to seven employees. “It was fast-paced and very high volume. It wasn’t sustainable. Now we’re able to run it with as little as two people,” said McGillivray. “Having this type of success out of the gate as first-time rookies at this stuff has been phenomenal and totally unexpected. Our return on investment was less than two months, and we can even go further because we’re able to adapt the robots to other products so quickly.” 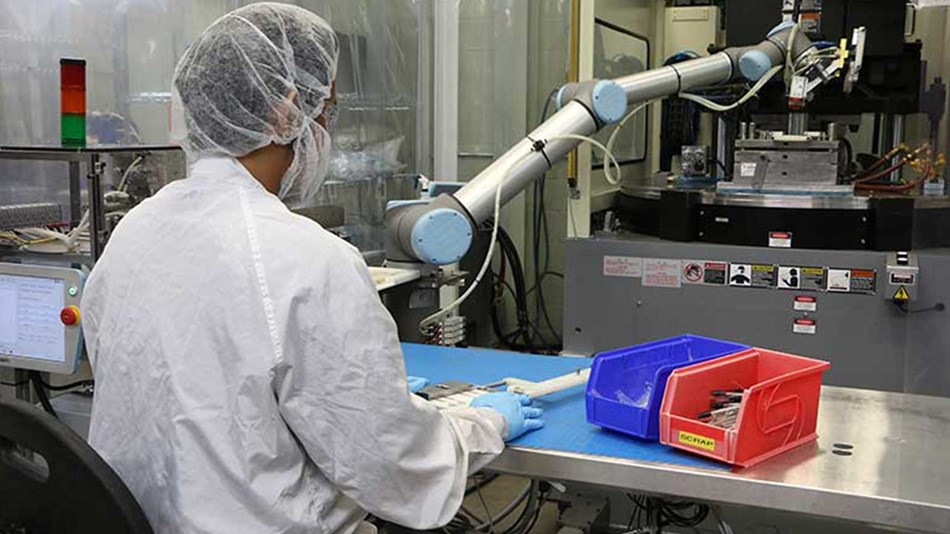 At Dynamic Group a UR cobot tends a complete injection molding machine cycle for a medical device with extremely heat-sensitive components: it picks and places “book frames” that hold pieces to be molded into the injection molding machine, transports the units to a trimming fixture, places the part in front of an operator for further handling, and finally pushes a button to activate the cycle again.

Nichrominox, a family-owned company in Lyon, France, has manufactured sterilization equipment for dentists for 40 years and faces growing competition from countries with low labor costs. The company sought to automate a metal-folding application with traditional industrial robots but soon realized that they did not have the necessary in-house resources to implement this and that the project cost was too high.

Nichrominox now uses four collaborative robots on three separate production lines to automate a bending cell, feed a CNC machine, and assemble products alongside an operator. One cobot performs a punching operation on one press then turns components on a shuttle table and performs a bending operation on a second press. A second cobot is fully integrated with the CNC machining center, saving time, improving the work quality, and reducing the risk of repetitive strain injuries. In the third line, an assembly station is run by an operator and a cobot working side-by-side in full collaboration without the need for any additional safety guarding. The operator activates the cobot by applying pressure (through an integrated force sensor in the gripper), which makes the robot easy to manage.

The cobots were programmed by an in-house employee, Cédric Lefrancq-Lumiere. “I did not have any programming knowledge but after only two days of training, I was able to understand and program the robot. Today I only need one or two hours to program a new task and I’m constantly improving the program to achieve better quality and precision,” he says. Nichrominox saw an ROI on the robots in 14 months and intends to keep transforming its production lines with additional cobots.

Collaborative robots or “cobots” are a new class of robots that are bridging the gap between fully manual assembly and fully automated manufacturing lines. This has become a critical competitive advantage for small and mid-sized specialty medical device manufacturers. Key benefits include flexible deployment, safe operation alongside human workers, easy programming and implementation, and fast return on investment.

Ready to get your team onboard with cobots?

Uptime: How Customer Service Evolves with the Cobot Market

In this conversation with Chris Wilson and Hanne Dorte Hansen from Universal Robots’ global service team, we look at how data-driven insights from the world’s largest install base of cobots help maximize production uptime.

Dancing through the pandemic: How a quantum physicist taught a cobot to dance

At the beginning of the pandemic, Dr. Merritt Moore didn’t realize that her only dance partner for the foreseeable future would be a cobot. This didn’t stop her from turning the world of dance on its head and creating beautiful and unique performances with her new robot partner. 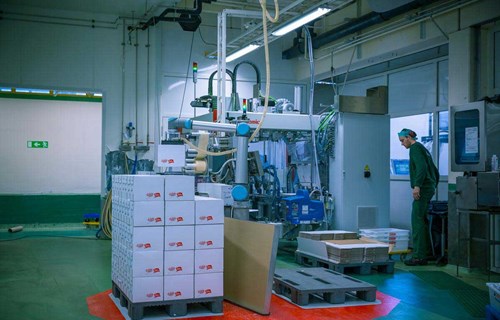 When considering a palletizing solution powered by UR cobots on your production line, calculating the return on investment is crucial to determine whether to make an investment or not. For those of you considering palletizing with cobots from UR, we’ve collected all the key information you need to make the calculation.