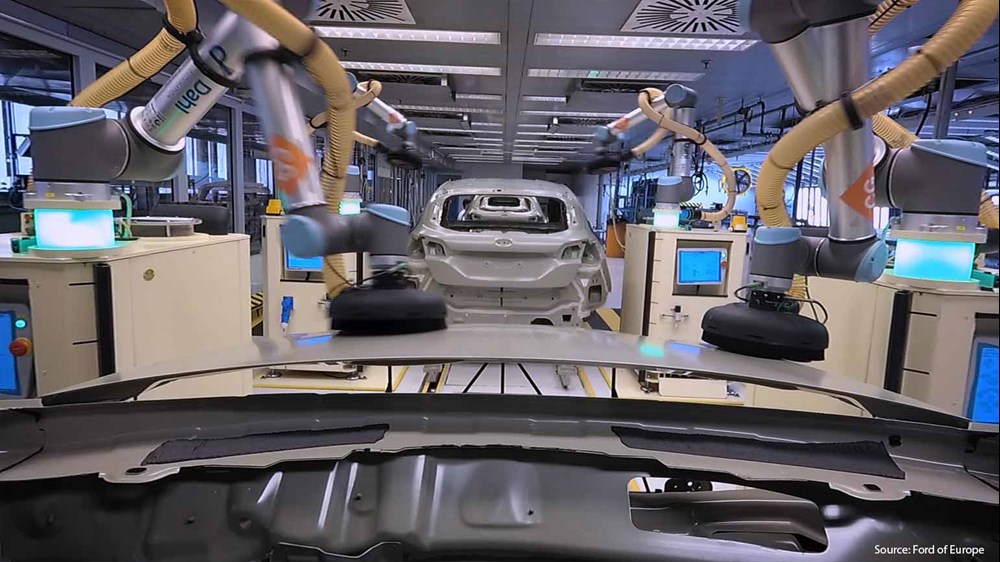 When electric-car pioneer Elon Musk tweeted that “Humans are underrated” in automotive production processes, his words echoed a principle that’s central to our philosophy at Universal Robots –humans and robots working together produce better results than robots or humans working alone. An MIT study which examined the impact of human-robot collaboration reached the same conclusion and revealed an 85% reduction in worker’s idle time when they worked alongside collaborative robots.

The dance between automakers and automation has been running for decades, but in 2019, according to the International Federation of Robotics, cobots experienced more growth than traditional industrial robots. So, which pain points in automotive production are driving this growth in cobot demand?

In this blog post, guided by automotive experts from Universal Robots, we will look at some automotive production pain points that UR cobots address, explore the growing importance of flexible collaborative robots in automaking and, along the way, we’ll showcase some UR solutions developed in direct response to demand from within the automotive sector.

Parts of automotive manufacturing have been highly automated for decades, but there are tasks, especially on the assembly side, that remain “highly dependent on manual labor,” says Jacob Bom Madsen, Software Product Manager at UR. It is on tasks like screwdriving where the flexibility and small footprint of UR’s cobots really benefits automakers: “A lot of auto production occurs in urban locations where it’s just not possible to find an extra 100,000 square meters to expand into,” explains Bom Madsen. “One of the beautiful benefits of cobots is their flexibility: they can be mounted in any orientation, following a risk assessment they can be deployed next to humans without safety fencing and they can successfully perform a wide variety of applications. Crucially, for urban car makers, cobots also have a small footprint, which means they can easily be dropped into existing production lines, mounted on a pedestal or fitted onto a mobile platform.”

Auto giant Opel, for example, deployed a UR10 cobot in its industry-leading Eisenach, Germany manufacturing facility to free workers from the unergonomic task of driving screws into aircon compressors on engine blocks. “This is not a task humans should be performing eight hours per shift,” explains Frank Croghan, Global Product Manager at UR.  “Cobots improve health and safety conditions for workers while at the same time ensuring consistent screwdriving performance.”

At PSA Group’s plant in Sochaux, France, the UR10 cobot is attached to a post which goes under the vehicle during production. Two operators pull down the vehicle and block it on both sides. The UR10 then inserts three screws on the right side and three on the left, refolds itself and then swivels back to its original position for another cycle before the arrival of the next car.

In highly regulated sectors like automotive manufacturing, where traceability is key, cobots also help manufacturers to control and track key production processes, such as the precise torque applied to screws when they are mounted to a car body, says Sebastian Lars Lange, Global Key Account Manager at UR, adding that the appeal of UR cobots extends beyond screwdriving tasks: “We see our cobots being used in the automotive sector for quality inspection, small part assembly, dispensing and finishing applications. Our goal is to enable the automotive industry to deploy our robots in every part of the manufacturing process from Tier 1 and Tier 2 suppliers through to OEMs.”

Ford of Europe has deployed UR10 cobots to work alongside human workers on Ford Fiesta finishing tasks. The six cobots complete a choreographed sequence to sand the entire body surface in just 35 seconds. After introducing the process in Cologne, Germany, Ford is now reviewing further rollout at the company’s facilities in Valencia, Spain, and Craiova, Romania. Source: Ford of Europe.

To enable this level of flexibility, explains Bom Madsen, UR listens to end-users and improves its product offerings accordingly: “For example, the new cable suite for our e-Series platform was developed as a result of requests from automakers to have more flexibility in integrating our e-series robots into their manufacturing lines.” UR’s latest cable suite offering now comes with a base flange connector, which is a plug at the base of the robot designed to enable even more flexible cobot deployment and servicing. “When you have a robot on a manufacturing line, two things can go wrong,” says Bom Madsen. “Either the robot has a breakdown or the cable to the robot gets broken. The new base flange connector ensures that in case of robot failure, for example, you can leave the cable and installation in place, take the robot off, drop a new robot into the same location and hook up the cable again. One of our North American automotive customers likened this process to the extremely fast tire changes seen in Formula One pitstops because it can be performed so quickly.” 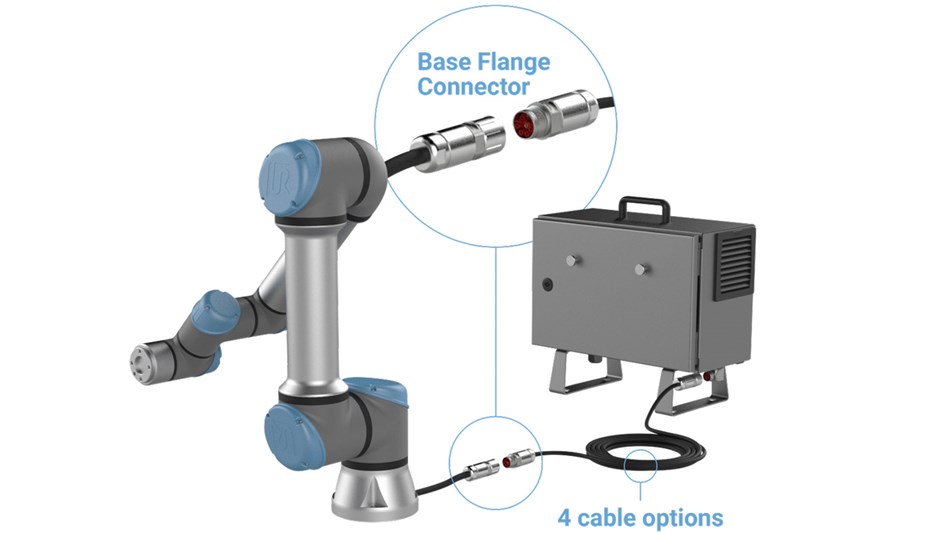 Due to the limited availability of space in and around most automotive production lines, manufacturers like keep their robot assets close to the production line and move the control cabinets out to “cabinet islands,” explains Bom Madsen. “When you have a confined space, you want to use it for things that are doing operations. The control box is not actually performing operations, so our customers asked us to provide longer cables to make more room for operators and other equipment close to the car body.” Consequently, the new cable suite for e-Series includes a new 12-meter option that enables even more flexibility in cobot deployments.

Similarly, car makers were looking for ways to increase the work envelope of their cobots with ceiling- and gantry-mounted and 7th axis rail setups. In response, UR has included new high-flex cable options in the cable suite for e-Series to support such deployments. “The high-flex cable is designed to handle 5 million repeatable bends at the specified bend radius,” explains Bom Madsen. “This supports effective 7th axis installations which can greatly increase the work envelope of the cobot.”

Automakers also spurred the development of the new e-Series Teach Pendant which comes with a fully integrated 3-postion enabling (3PE) device, reveals Croghan: “For some applications, some leading European auto manufacturers found it would be useful to have a 3PE device fully integrated with the e-Series Teach Pendant. What we have done with this product is full native integration both mechanically and in terms of software. So, it's very intuitive and anyone that has trained on our cobots will find it extremely easy to use.” 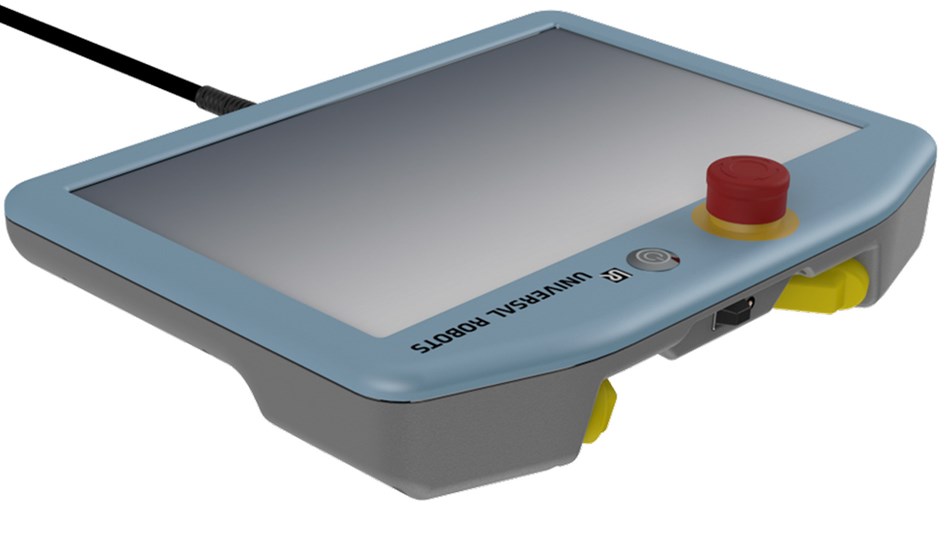 The new 3PE teach pendant now available through the UR+ platform

The development of products like the new e-Series Teach Pendant and the Cable Suite are very much part of Universal Robot’s overall commitment to quality, adds Croghan: “We started with the customer need. We did a thorough job of creating a product to meet that need. And we put it all through very rigorous testing.”

Whether you’re a Tier 1 or Tier 2 supplier or an OEM operating in the automotive sector, Universal Robots’ flexible cobots can help you increase production, streamline your processes and improve quality. Talk to one of our automotive application experts today to find more! 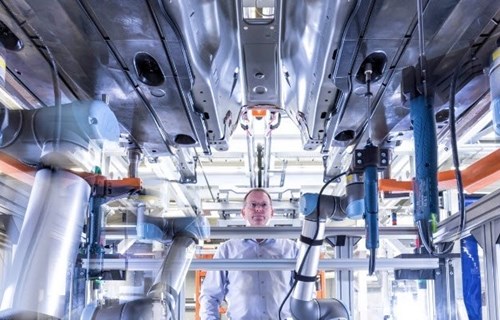 The history of robotics has always been closely tied to the automotive industry. In fact, in 1962 General Motors was the first-ever company to deploy industrial robots. And from the 1970s onwards, the whole automotive industry was characterized by the comprehensive use of large robot systems in their production lines... 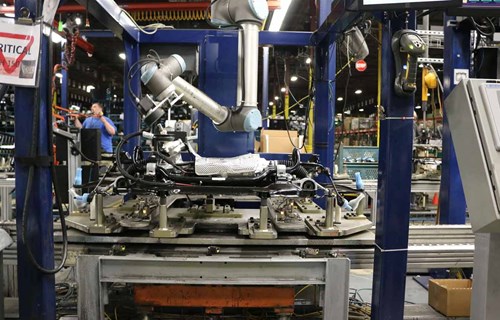 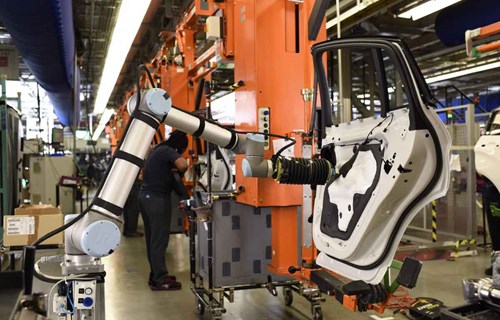 The New World of Automotive Manufacturing: Cobots Optimize Quality, Output and ROI for OEMs and Suppliers