The Danish industrial world can move a great deal of production to Denmark from abroad, and do it profitably, by utilizing robots. It requires that the Danish workforce is trained to recognize and use the full capabilities of modern automation technology. Too few employees have the skills and experience to accelerate this development and to place Denmark at the forefront of the global robot race.

In the 2000s many Danish production companies moved their production, or outsourced parts of it, to countries where labor was cheaper.

For some companies it was a smart move, others ended up with a loss. However, Denmark as a whole suffered due to a loss of jobs and tax revenues. Compounding this was the fact that Denmark already faced a declining workforce with fewer people doing more work. Today a new trend has emerged. More and more Danish companies are moving their production back home, investing in a more profitable form of production, where humans and robots work side by side. The increase in robots in the Danish industry will only draw more production back to Denmark – but only if enough Danes have mastered how to use them.

As the unifying force behind Denmark’s thriving community of robotics developers, researchers, and users, RoboCluster is engaged in nationwide robotics training. Together with Industrisamarbejdet, DIRA, and the Danish Automation Society, we are taking the first step with introductory robotics courses in Jutland, Funen, and Copenhagen in the fall of 2016. The number of robots used in production has grown significantly globally in recent years. According to the robot association IFR, more than 240,000 industrial robots were sold worldwide in 2015.

Integrating robots and other automated technology often means a transformation for a company. Automation becomes a greater success if all employees know how new production methods change both processes and workflow. Investments in robots have a much greater return on investment when a company fully utilizes the potential of the technology.

For that reason, it is imperative that we expand our competency to keep up with the development of automation technology. Not to say that we all need to become highly educated robotics experts. There is a need for robotics competences on many levels; Some must have the skills to see automation opportunities, build automation solutions, and to install and program them. In addition, nearly everyone will be expected to acquire skills to operate various types of robots in their jobs in the near future. 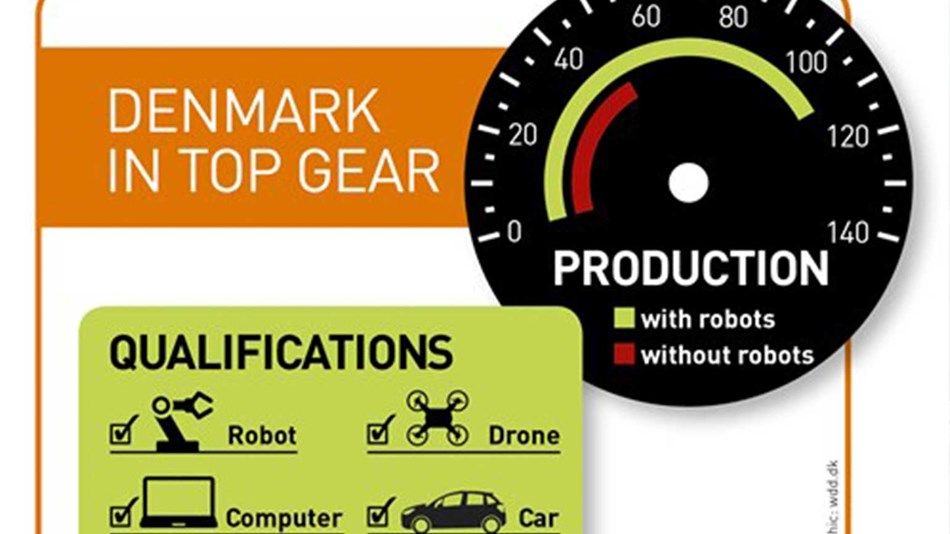 Collaborative Robots have helped denmark to stay in top gear.

Denmark ranks fifth in the world in terms of robot deployment, but there is still plenty of room for more job-creating robots. Sixty percent of small businesses in this country have not yet made use of automation. They seem to be so focused on daily operations that they forget to look up, similar to driving a car by only looking at the dashboard, forgetting to keep an eye on the road ahead.

Their reasons differ: “It is too expensive,” “What we are doing is too specialized for it to be worthwhile for robots to do it,” “We do not know how to program robots,” “It is much faster to do it manually.” Those are all incorrect assumptions based on shortsighted thinking that may have been true for previous robot solutions. Today, most robots are both user-friendly and flexible to work with because the robot industry has gone through a similar development as the computer industry.

Managers and employees must be primed to see the possibilities of using robots as a flexible tool in the workplace. Future factories will be flexible, cost-effective, and closer to the end consumer. Therefore, there is an urgent need for strong and coordinated robotics technological training of the Danish workforce. A political focus on robot training of Danes would boost Denmark's flexibility and competitiveness.

It will not only benefit companies, but employees themselves will secure their value on the job market. Robotics skills will be increasingly valuable in a competitive job market. I would go so far as to say that a very large portion of the Danish population already has the basic prerequisites for acquiring robotics skills. The average Dane not only stays current with computers, mobile phones, and other technologies that are more advanced than we could have imagined just 20 years ago, they also personalize them.

Danes could easily familiarize themselves with the operating systems and platforms needed to integrate robots in the workplace.

In the 90s, Denmark became a digital frontrunner by insisting that everyone should be able to master a computer, among other things. For many years, Denmark could boast of having the most IT-skilled population in the world with the most widespread use of IT. We are still among the top 10. Denmark has excellent qualifications to become a pioneer of intelligent automation. The Danish manufacturing workforce is characterized by being well educated with a high level of flexibility and strong accountability. The flat hierarchical structure in the Danish work culture means that employees take ownership.

Let the investments in cutting-edge automation technologies go hand in hand with a strong focus on robotic skills at all levels. Then we, along with robots, can ensure a strong and competitive Danish industry. 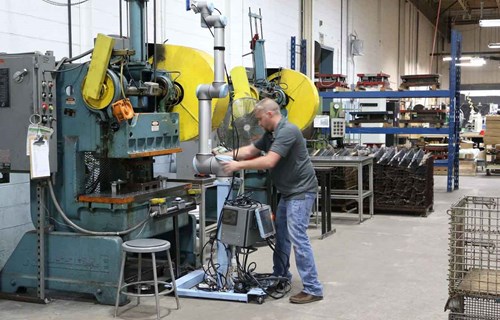