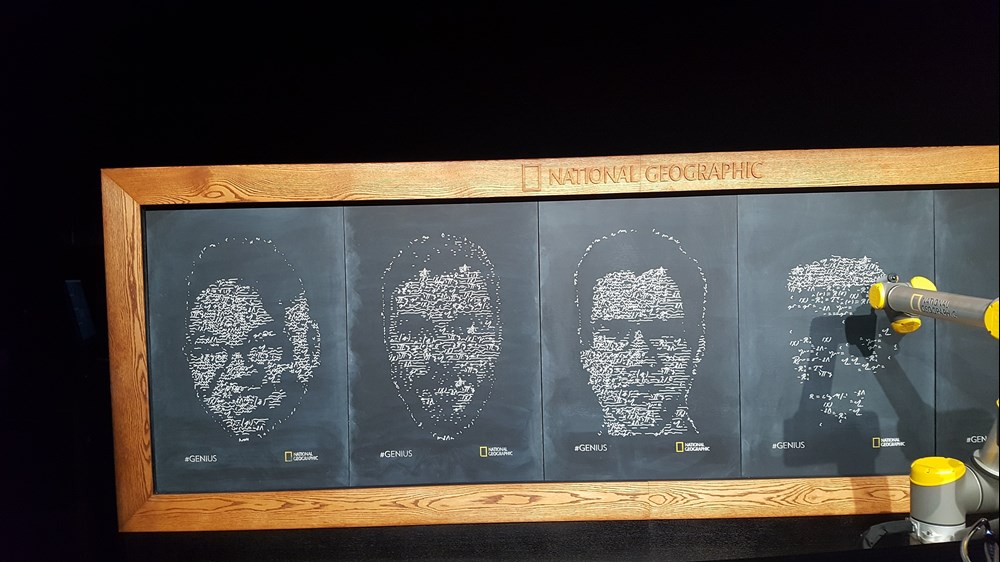 This year’s SXSW festival in Austin, Texas featured a UR10 cobot in a show-stopping demo that highlights the robot’s creative capabilities. The demo was developed by innovation studio Deeplocal to help launch National Geographics’ new “Genius” TV series based on the life of Albert Einstein. People were invited to tweet a photo of themselves to a UR10 robot set up in front of a digital chalkboard. Using Einstein’s own handwriting, the cobot quickly began writing the inventor’s equations on the chalkboard, in seemingly random locations. It was only on stepping back from the chalkboard that the person’s portrait—made up entirely of equations—became clear. (Watch the UR10 channel science and art in this SXSW video report from Adweek.) The robot’s speed and accuracy—as well as sophisticated programming capabilities—made the demo possible.

"This project was created in just 3 weeks,” said Kevyn McPhail, roboticist and integration engineer with Deeplocal in Pennsylvania, who was commissioned by National Geographic to create the demo. “We really liked working with the UR robot. It was an incredibly fast process." Deeplocal—which describes itself as “kind of like an advertising agency, but with aerospace engineers, a CNC router, table saws, and a lot of background noise on our conference calls”—started out loaning a UR3 robot, but quickly decided to purchase its own UR10.

In developing this cutting-edge demo, Deeplocal also received invaluable tech support from Universal Robot’s Tom Moolayil in the New York office. “The UR team really helped us push the application in ways it had not been pushed before,” said McPhail, who is now contemplating future UR robot projects. 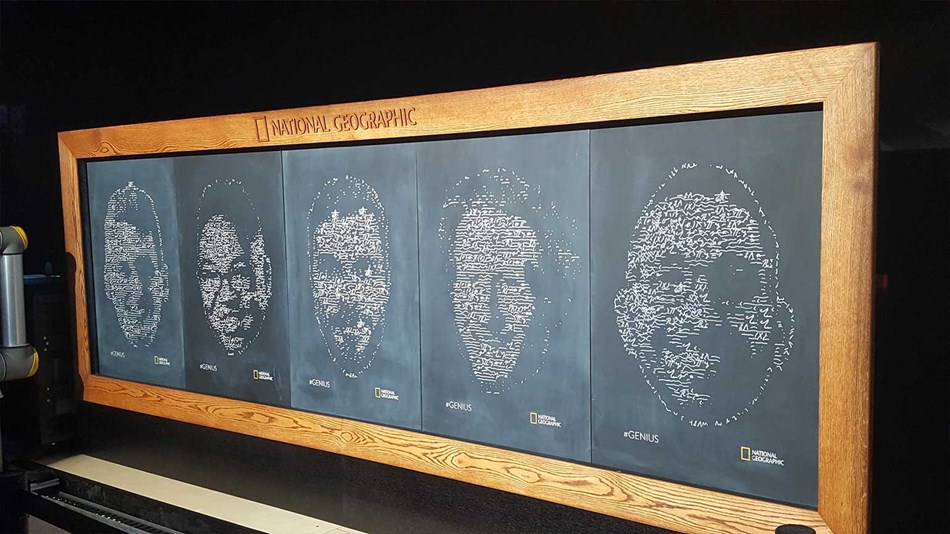 To maintain the surprise of the portrait emerging, the trajectories were deliberately sent in what looked like random order so that the demo appeared to be the robot simply writing equations—until the portrait was completed.

The programming for the demo was done on a PC, using custom software made possible by the Universal Robots’ open interface SDK. This allows third parties to easily develop their own software tools for creative applications and make them available through the UR+ ecosystem. Once the photos were scanned and input to the computer as vector graphics, the program broke the image down into sequences that were streamed to the robot with ordered trajectories to trace the path. To maintain the surprise of the portrait emerging, the trajectories were deliberately sent in what looked like random order so that the demo appeared to be the robot simply writing equations—until the portrait was completed.

While this appears to be a one-of-a-kind application, it represents the powerful programming capabilities of the UR robots. While many cobots are implemented in repetitive applications such as machine tending or pick-and-place, new, more complex applications are emerging every day. Those may include changeable operations such as gluing or welding parts with different shapes and different required paths, which can be programmed similarly to this demo.

Einstein himself wrote: “To raise new questions, new possibilities, to regard old problems from a new angle requires creative imagination and marks real advances in science.” (The Evolution of Physics, co-authored with colleague Léopold Infeld.)

This “genius” example using a Universal Robot shows just how possible those advances are. 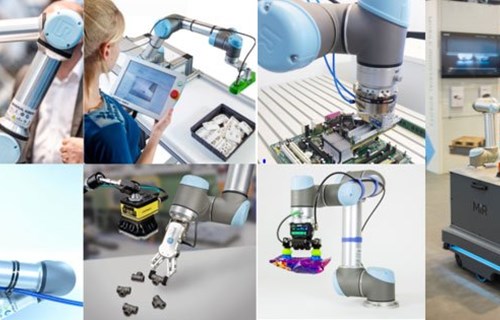 The Benefits of an Ecosystem

At Universal Robots (UR) we have launched UR+, the world’s first ecosystem of third-party end-effector solutions and other add-ons for our collaborative robot (cobot) arms, allowing us and our partners to focus on what each does best, encouraging collaboration and creativity that benefits customers. While other manufacturers... 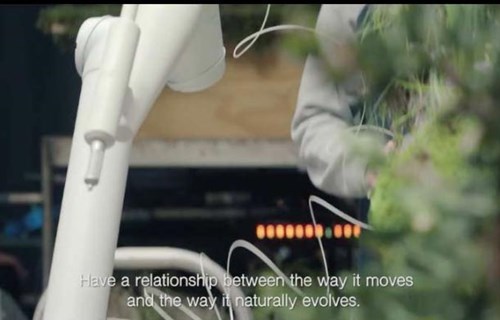 Robots and Nature Combine for a Compelling Creative Concept

Robots as powerful productivity tools is a well-accepted concept. Less-understood, perhaps, is the role robots can play in highly creative applications that inspire us to think differently about technology and its potential. When robots are used outside of technical or industrial environments, however, the requirements are... 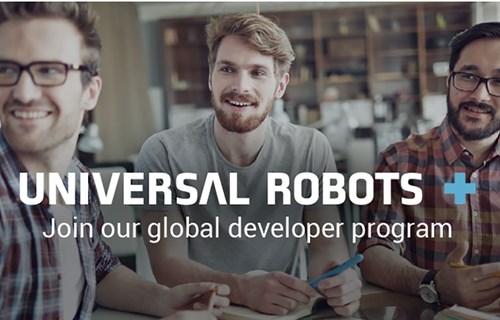 Universal Robots+ is a unique online platform that is making UR robots even easier to implement, with exciting new opportunities for developers and more powerful capabilities for end-users and distributors. UR+ consists of two critical elements: online Showroom and Support & Marketing Platform. Aggressive growth of the UR+...