Cobots as an essential part of reshoring 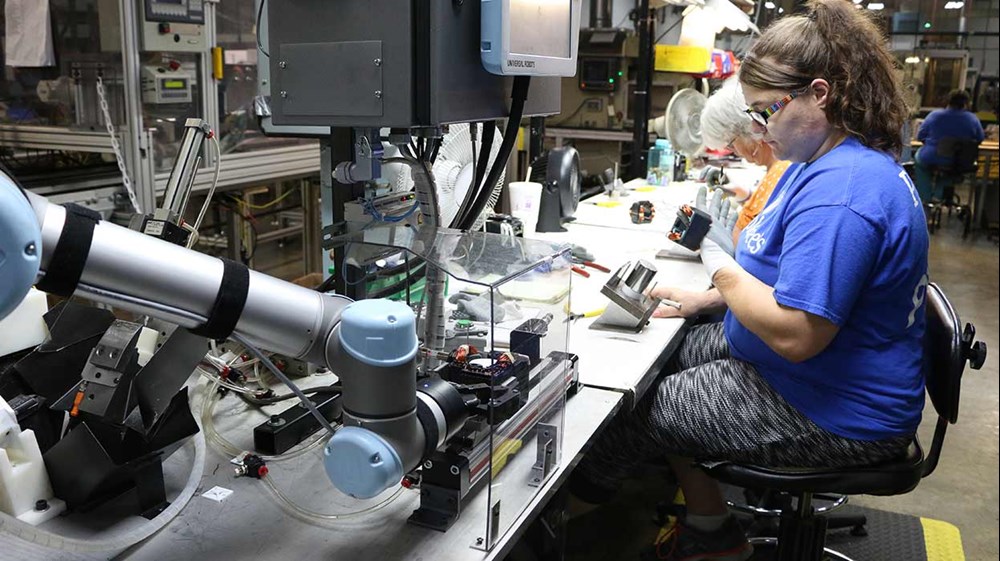 The long-standing industrial practice of outsourcing manufacturing operations to low-cost parts of the world in order to keep manufacturing costs down has recently taken a dramatic turn. With rapidly rising labor costs in traditionally low-cost countries such as China, manufacturers are now experiencing that the financial advantages of manufacturing overseas are being seriously eroded.

When they also realize that offshoring also usually involves complex logistics, added shipping times, and difficulties in reacting quickly and nimbly to changes in customer requirements, there are clear reasons why many manufacturers should be looking for new ways to reduce manufacturing costs and increase productivity.

Automation using cost-effective, advanced robotics technologies is helping this shift by enabling companies of all sizes to remain cost-competitive while keeping their manufacturing operations at home.

A report from Boston Consulting Group has shown that “the share of executives saying that their companies are actively reshoring production increased by 9% since 2014 and by about 250% since 2012. This suggests that companies that were considering reshoring in the past three years are now taking action.”

56% of the survey’s respondents believe that decreasing costs of automation have improved their product competitiveness, and 71% believe that advanced manufacturing technologies will improve the economics of localized production. Nearly three-quarters (72%) said they will invest in additional automation or advanced manufacturing technologies in the next five years.

Interestingly, this increase in automation is not expected to have a negative impact on employment. The report shows that 50% of respondents anticipate net manufacturing job creation during the next five years, with 74% citing access to a skilled workforce as a strong factor for moving production back to their home market – in this case, U.S.A. 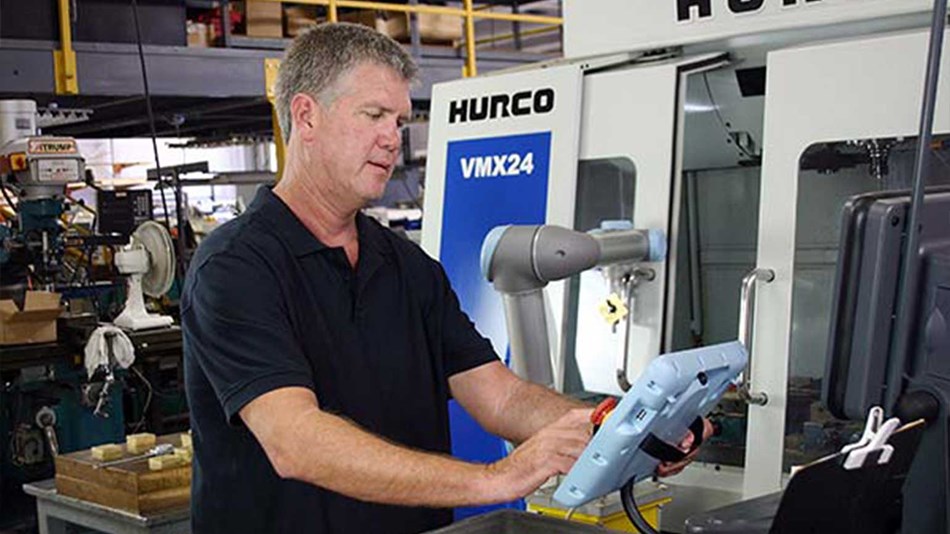 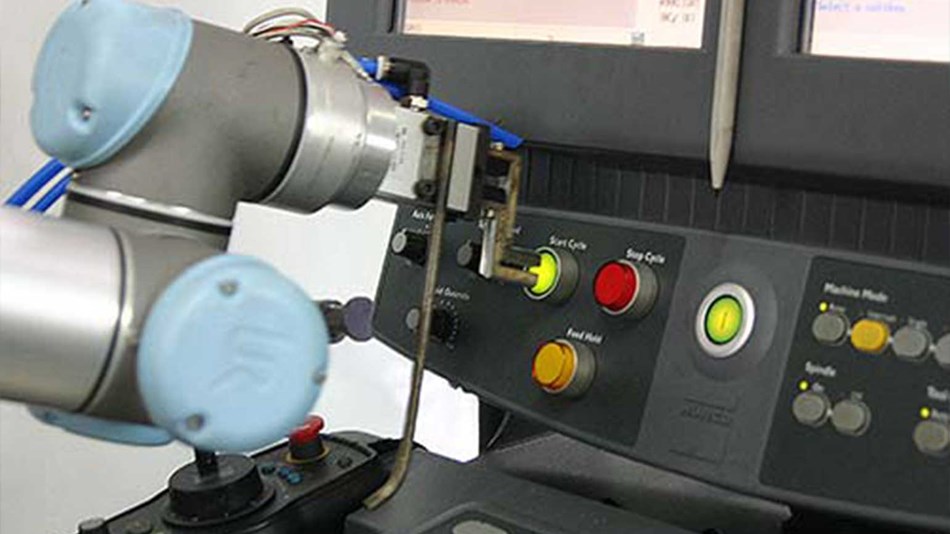 The UR5 robot at RSS Manufacturing & Phylrich initiates the machining cycle. 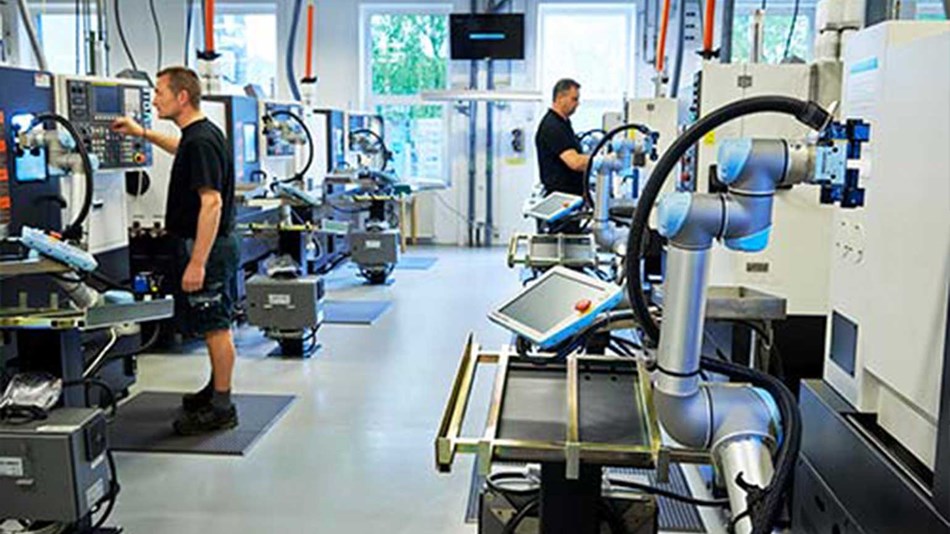 Trelleborg Sealing Solutions in Denmark has installed 42 UR robots, which resulted in improved competitiveness and the hiring of 50 new employees to keep up with the increase in demand.

California-based RSS Manufacturing and Phylrich is a case in point, with CEO Geoff Escalette declaring: “The whole premise for our company is to bring manufacturing back to this country. Our new robot fits perfectly within that master plan.”

Faced with a need to meet a new monthly order to produce 700 valves, the company deployed a UR5 from Universal Robots as a cost-effective automation solution that could be easily moved between different CNC machines, assembly lines and tube benders. As Escalette explains, “our CNC machine can normally do 400 valves per month with two shifts, so we would have been forced to buy another machine even if we put a third shift on. With the higher run-rate using the UR5, none of this was necessary.”

The new robotic solution thus provided greater flexibility and increased productivity, with the initial outlay recouped within just a few months. And its advanced safety features meant there were no additional costs for safety guarding.

Escalette readily admits his employees weren’t overwhelmingly enthusiastic about the new robotic arm when it first arrived. “They thought they were looking at their replacement. But now, we can educate and promote our employees from machine operators to robot programmers and quality control inspectors…when they realized how easy it was to use the new robot unit and what they’ll eventually be doing with it, they all embraced it. Now they are excited to become the first guy to start programming the robot.” 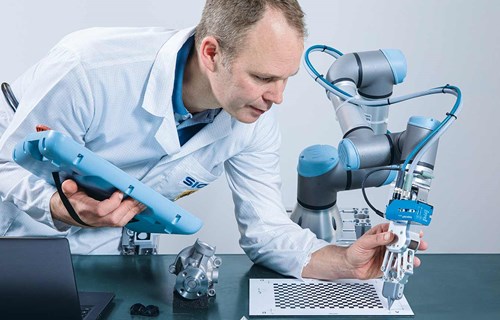 Collaborative robots, or cobots, have the power to transform a business’s capabilities, productivity and overheads. More affordable, versatile and compact than traditional industrial robots, they allow even small operations to leverage the power of automation and take their productivity and profitability to the next level. Here is a brief history of the cobot, and how they are transforming manual work for companies across the globe. 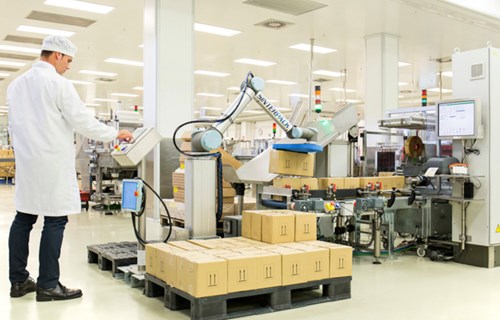 The industrial applications of cobot palletizers

Cobot palletizers are making industrial packaging and palletizing operations simpler, faster, and more efficient. As well as doing the heavy lifting, they can also perform a range of tasks that require accuracy, speed, and relatively complex movements too. We find that while a lot of companies know that automation can help them be more competitive, there is still a lack of awareness about the many ways a cobot can add value to their operations. 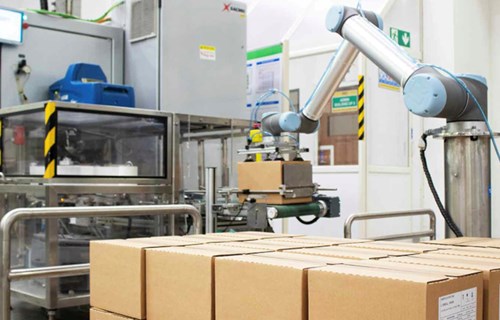 As factory automation becomes accessible to even the smallest businesses, cobot (collaborative robot) palletizing is one of the first areas business owners are looking to explore. Of the many robot applications, palletizing is a popular choice to drive workplace efficiency, reduce costs and keep human workers safe. Here are just five of the ways cobot palletizing can help your business reach its key objectives.