The skills gap continues to plague manufacturers around the world. In fact, the 2016 edition of the Hays Global Skills Index says that the skills gap is fast becoming a skills chasm. Many manufacturers are struggling to fill factory jobs, which can be especially difficult in regions of low unemployment or in industries or positions that have fallen out of favor with workers because the jobs are seen as boring, injury-prone, or unappealing. Recently a front-page story in the Washington Post created wide-spread attention as it documented how Tenere, a Wisconsin-based contract manufacturer, struggled to fill 132 open positions on its production line. As an administrator in Tenere’s human resources department put it: finding people was like trying to "climb Everest" – even after the company increased wages and loosened policies on hiring people with criminal records.

For many manufacturers, temporary labor has been an option, but that approach has its own challenges. Ask any plant manager about temporary workers and prepare for a litany of complaints. Workers don’t show up, or they show up under the influence of drugs or alcohol. Or they show up and then simply disappear at the first break—bored, unhappy, or tempted by other options.

With little motivation for company loyalty or pride in their work, temporary workers are more likely to miss productivity goals and to make errors that result in product quality issues, rework, and increased scrap. All of that forces companies to weed out workers who are present but simply aren’t, well, working out.

In many cases, companies are forced to increase compensation to compete for workers, but even that isn’t enough. And the constantly revolving door of unreliable labor means that other costs continue to rise—for training, staffing, and materials. At the same time, customer satisfaction takes a hit from reduced product quality or delivery delays.

While the problem is multi-faceted, with no simple answers, automation offers opportunities to address many of these issues. Collaborative robots—which are designed to work alongside human workers, doing the dirty, dull, and dangerous jobs that human workers don’t want—can offer immediate as well as long-term relief. Here are 7 reasons to consider cobot colleagues to solve your staffing woes:

Cobots’ low upfront costs can be as little as about a year’s wage for a single hourly temp worker, and there are minimal additional costs. For many applications, the only other expense is the end-effector or gripper. Cobots can fit almost anywhere a human worker can, and most applications don’t require safety guarding (after risk assessment), so there’s no costly disruption to the production floor layout. Many cobots pay for themselves in a matter of months, offering long-term relief to staffing costs.

2. COBOTS GET TO WORK FAST

For most basic, repetitive tasks such as machine-tending, screw-driving, or assembly, cobots can be up and running within hours. The intuitive teach pendant makes “training” the robot quick and easy, even with no previous robotic or programming experience. And while cobots can get to work immediately, they’re also lightweight and flexible enough that they can be redeployed to new tasks quickly and easily. Programs can even be stored to immediately resume previous jobs.

Cobots can work around the clock without breaks. They don’t come in late or leave early, and they need minimal maintenance or updates. Many UR cobots have been in action for years—long after they’ve paid for themselves.

4. COBOTS CAN IMPROVE QUALITY AND PRODUCTIVITY

Cobots complete their operations consistently, accurately, and reliably, for improved output and product quality. In many cases, companies see a significant reduction in scrap. And while cobots work at about the same speed as humans, most companies see output increase because cobots can work consistently around the clock. 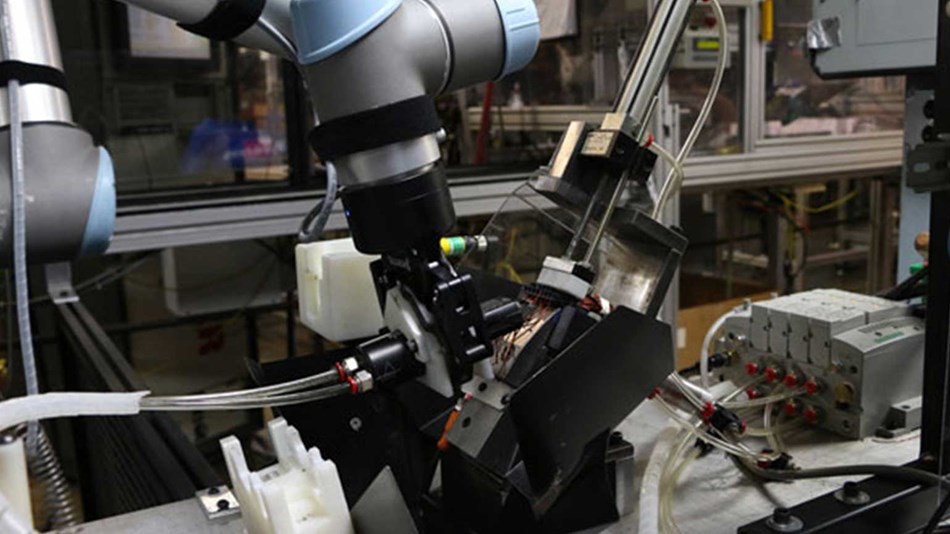 Instead of having an employee manually cut 16,000 wires per day by hand at Scott Fetzer Electrical Group in Nashville, Tennessee, the UR5 robot now handles this task, eliminating the risk of workers getting carpal tunnel syndrome. 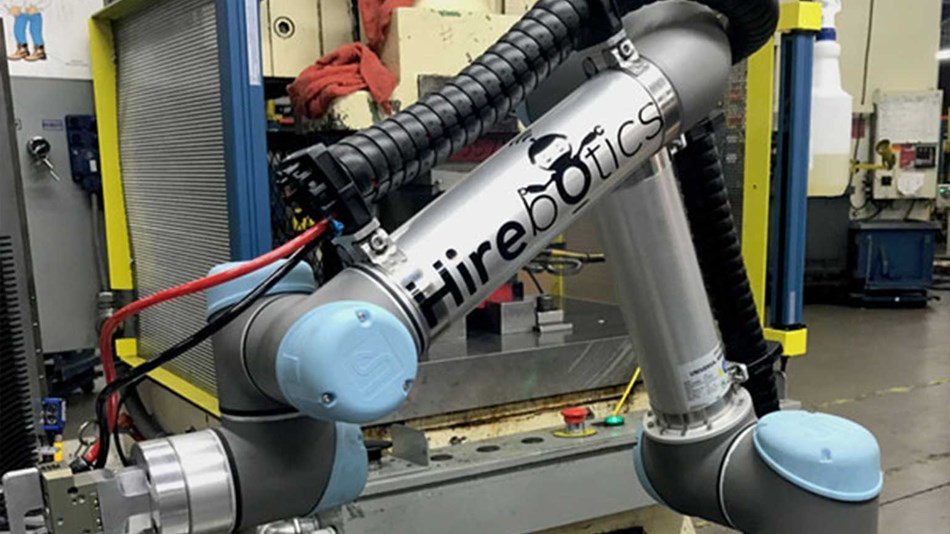 Unable to find employees for their production line, Tenere has deployed UR robots for some of the tasks instead. Now, a UR5 is tending one of the punch presses. 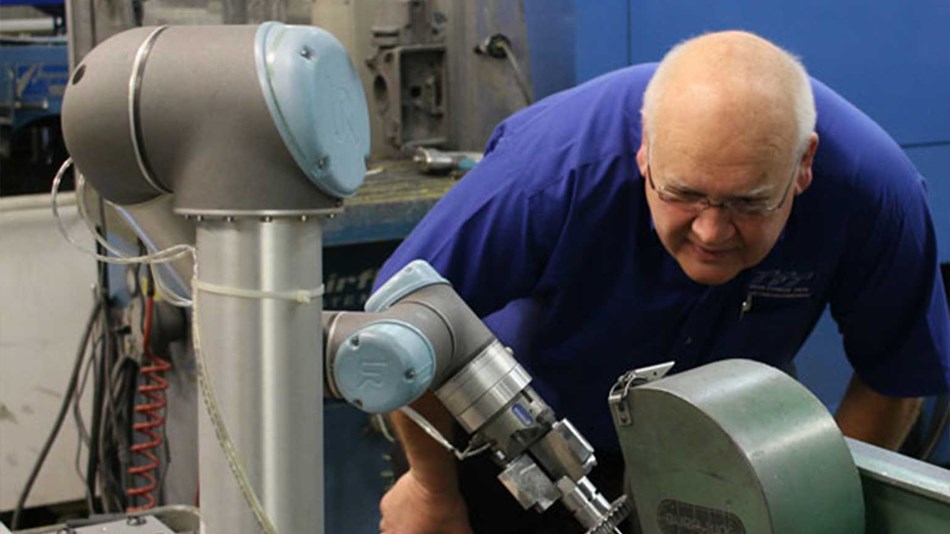 The UR robots at Task Force Tips in Valparaiso, Indiana, had a return on investment of only 34 days. 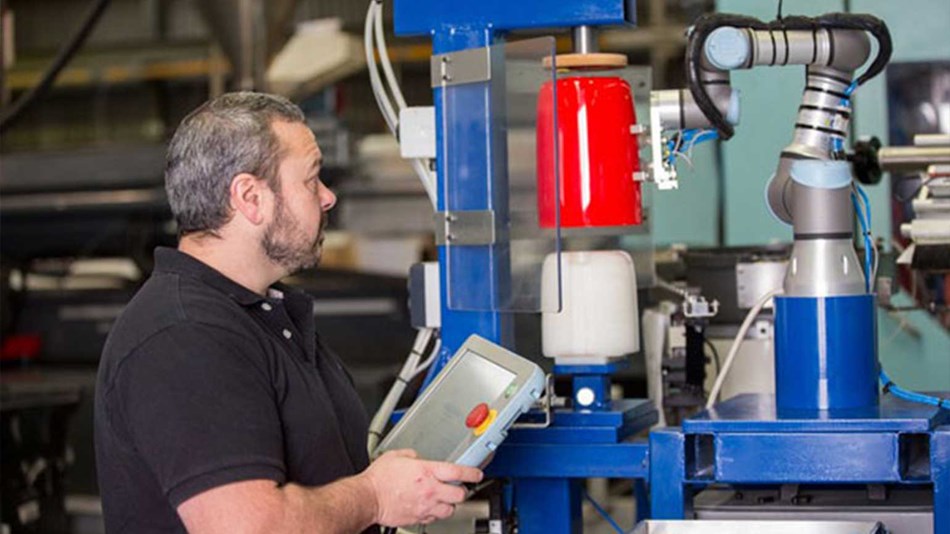 At TCI in Auckland, New Zealand, UR robots handle assembly and labeling tasks. “The robots are easy to set up and reprogramming can take just a few minutes,” says Quintin Fowler, TCI’s Managing Director.

Cobots can perform tasks that could be dangerous or injury-prone for humans, and they don’t need an ergonomic work station or breaks to stretch or change position. And with built-in safety features that slow or stop the robot arm if a human enters its workspace, the cobot keeps its human colleagues safe from accidents.

Instead of having an employee manually cut 16,000 wires per day by hand at Scott Fetzer Electrical Group in Nashville, Tennessee, the UR5 robot now handles this task, eliminating the risk of workers getting carpal tunnel syndrome.

As hard as it is to hire people for day shifts, companies that run multiple shifts can run into even more difficulties staffing swing or graveyard shifts—not to mention the need to pay shift differentials. Even though cobots are designed for collaborative work, they can also be used for many lights-out manufacturing processes, so that new lines are ready to go when employees arrive in the morning.

By automating low-value tasks that human workers don’t want to do, companies can redeploy valuable employees to jobs that require more dexterity or decision-making skills. This can help companies keep skilled employees motivated, with a career path that helps them move into positions with more responsibility—such as robot operators or programmers.

Don’t let staffing woes hold you back. Download our ebook “How Cobots Help You Bridge the Automation Skills Gap” to learn more.