GKN Driveline Japan Ltd is one of UK-based GKN Automotive’s companies, a global company that develops and manufactures powertrain and driveline solutions for automobiles. The company’s technology is installed in approximately 50% of all automobiles in the world. GKN Driveline Japan was facing a chronic labor shortage issue and considered automation using robots. In addition to maintaining a stable supply of high-quality products, there were concerns about the difficulty of automating the experience and sense of the operators as well as the safety issue with the traditional machineries. UR cobots solved these challenges, assembling gears and handling inspection.

With the aging of experienced operators, who had been the backbone of the company’s production line, GKN faced a chronic labor shortage issue. “We first considered introducing a dedicated machine, however, it was challenging to have machines perceive sensations in the same way humans do, such as tightness and looseness,” says Mr. Nobuyuki Sakamaki, sub leader of operations while operation supervisor, Mr. Mitsuo Oyama, points out the challenges of the traditional robot: “The typical impression of robots in the old days is a space surrounded by fences where people are not allowed in, wasting space.”

GKN Driveline was looking for a solution where they can automate the high level experience and sense of operators and at the same time allowing humans and robots to safely coexist. Then decided to introduce UR cobots that meet, these criteria. Mr. Hidefumi Yoshida, Senior Manager, Manufacturing Engineering Section says: “The reason why we selected UR was that they were already adopted by a major Japanese car manufacturer. The payload also met our needs.” First, a UR5 cobot was introduced to the gear assembling process, replicating the sense of human touch provided by the operators. “Using the external torque sensor and gripper from Robotiq, selected from the UR+ portfolio, we succeeded in reproducing it of trial and error,” says Mr. Sakamaki. GKN also considered safety. For example, zone sensors are set in 4 different directions, which sets the robot in slower motion when people are around.

Next, two UR5s were introduced to the front and back inspection process of a thin iron plate installed in the viscous coupling. The introduction of the robot to this process was proposed by Mr. Tomohiro Kikumoto, leader of operations, after seeing the success of the gear assembling application. “Although old machines, called front and back discriminators, have been used to date, it is insufficient and therefore, line workers were asked to manually carry out such inspection tasks after a long day of work. Robots became desirable in order to eliminate such unnecessary overtime work,” Mr. Oyama explains with Mr. Kikumoto adding:, “As a result, we succeeded in manufacturing under a full 24-hour operation. The risk of worker fatigue has been reduced and we are delighted to have been able to automate their processes based on our suggestions.” Unlike traditional robots, UR cobots do not require safety fencing after a successful risk assessment and people and robots can work in the same space. This realizes the safe space-saving.

When introducing the UR cobots, Mr. Sakamaki, Mr. Kikumoto and a total of seven people attended the three-day core training provided by an official distributor of UR cobots, Kantum Ushikata Corporation. Mr. Yoshida concludes; “We purchased another UR robot for demonstration purposes to encourage other departments to try and consider applying UR robots to other production processes. As a UK-based company, all the companies in the GKN group have a culture of trying new things and share successful experiences. This case story became another good example for our Japanese operation to share with GKN departments in other countries. We will strive to make proactive efforts so that humans and robots can coexist.”

“As a result, we succeeded in manufacturing 600,000 units a month under a full 24-hour operation. The risk of worker fatigue has been reduced and we are delighted to have been able to automate their processes based on our suggestions.””
Mr. Tomohiro Kikumoto Leader of Operations, GKN Driveline Japan Ltd

GKN Driveline Japan Ltd is one of UK-based GKN Automotive’s companies, a global company that develops and manufactures powertrain and driveline solutions for automobiles.” 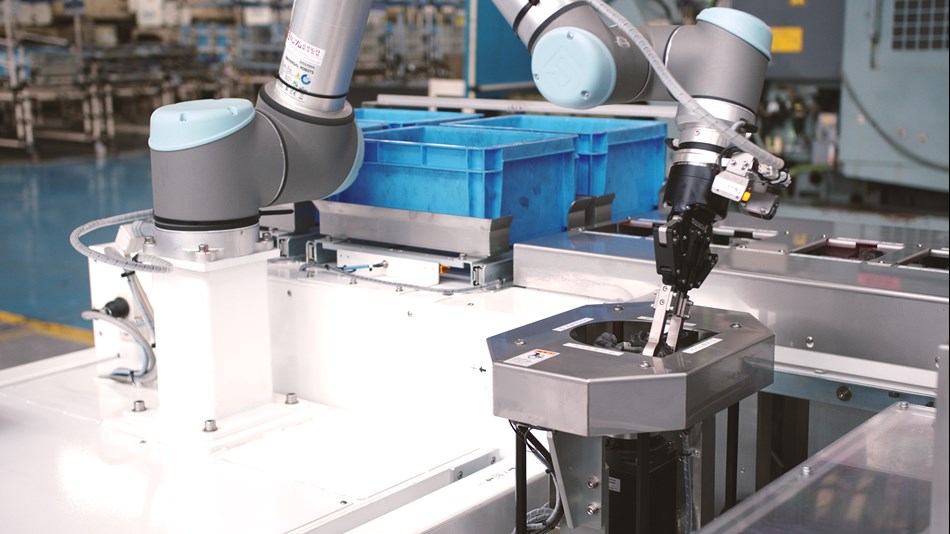 A UR5 cobot is replicating the sense of human touch with help of the external torque sensor and gripper from Robotiq, one of the UR+ products. 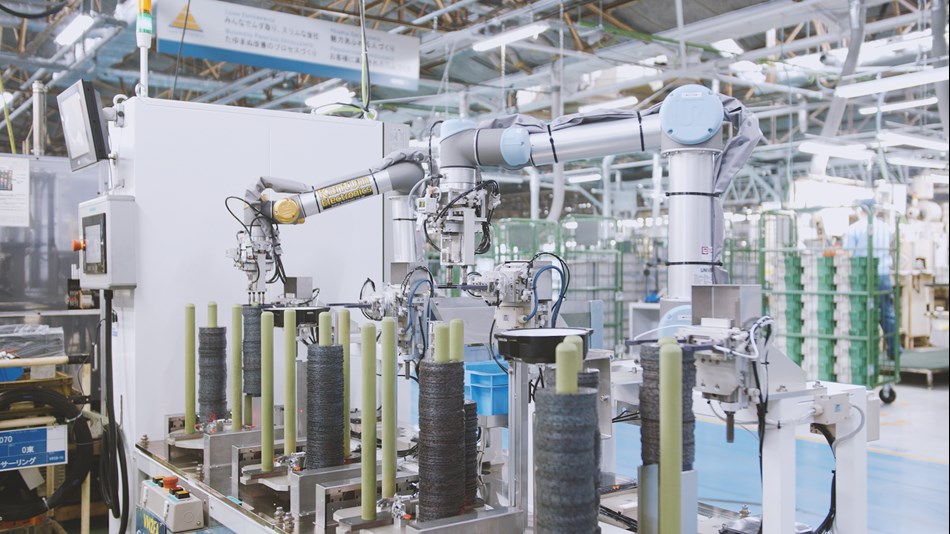 Two UR5s were introduced to the front and back inspection process of a thin iron plate installed in the viscous coupling; a UR5 picks up a plate from the right pole and if it is in the right side, puts it on the left pole. If it’s in the opposite side, the UR5 turns it around and put it in the left pole. Two UR5s are executing the same action in order to improve the productivity. 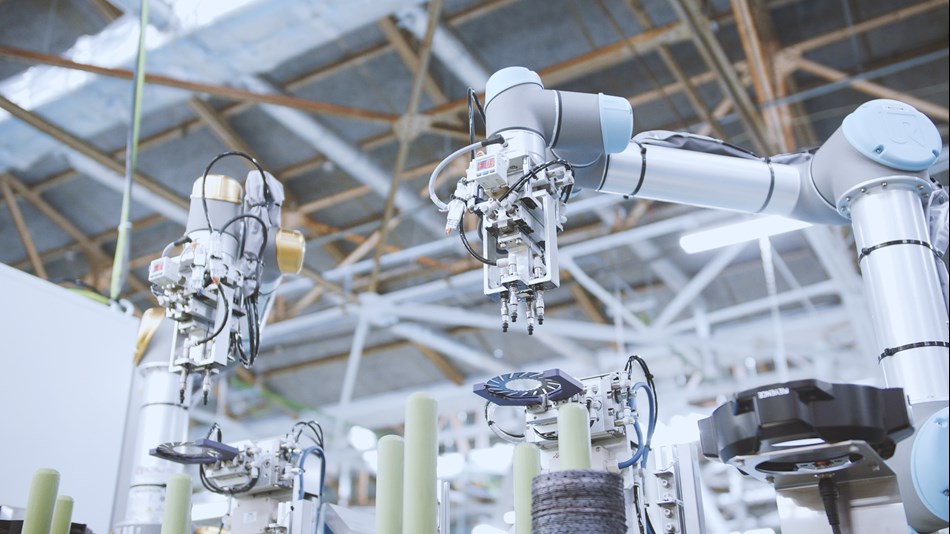 An external high precision camera judges if the plate is in the right side or not. 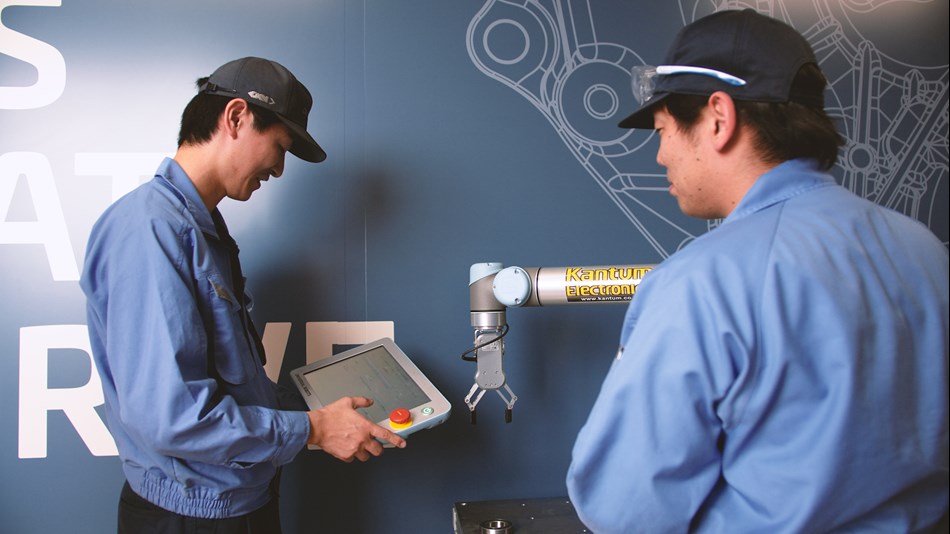 GKN Driveline installed another robot for demonstration usage, so that all the people in the factory can think about if they can improve the productivity utilizing the cobot. 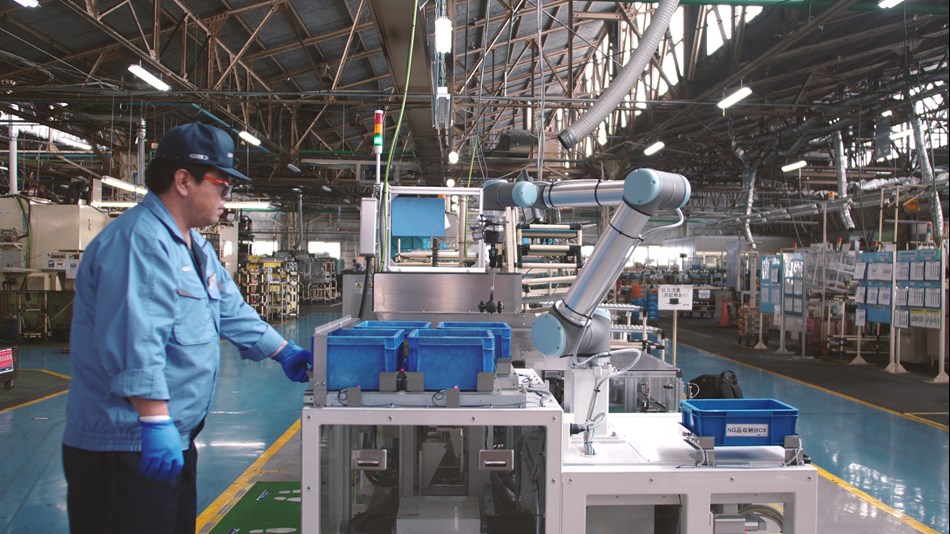 A UR5 cobot was introduced to the gear assembling process, to collaborate with the operators, who provide materials and monitor the UR5’s performance.