An interview with Jürgen von Hollen, President of Universal Robots

In October 2016, Jürgen von Hollen joined Universal Robots as a new President. After almost two months full of work, the time has come to draw an initial summary. We asked Jürgen to share some insights with us on his personal impressions, his vision, and the Universal Robots strategy.

When did you first hear about Universal Robots?

At the beginning of this year, I visited an Industry 4.0 event organized by McKinsey & Company that mentioned Universal Robots as part of their presentation. I kept the company in mind and a few weeks later, my phone rang.

What made you decide to join Universal Robots as President? What was that process like?

Your resume includes leading positions at big players like Telekom, Daimler, and Bilfinger SE. What attracted you to joining a comparatively small enterprise like Universal Robots?

I drew up a summary. And it turned out that in retrospect, I had the most fun at work and the most added value for myself at smaller companies. Other reasons were the technology and market opportunities. There’s so much potential in it, so much change and progression going on. If you put that together, the decision seems to be quite clear.

Since October you have been President of Universal Robots. It’s time for a short recap: What are your impressions? Do they meet your expectations or have there been surprises?

There have been hardly any surprises, especially no negative ones. Due to the comprehensive decision process, I already knew the company very well. What really has impressed me is the incredibly high level of motivation within our staff. They all joined Universal Robots because they really believe in our concept. Such energy is hard to create – so it’s even better when it’s already there.

You were already very familiar with the automation industry even before you joined Universal Robots. Within this industry, how do you see the development of collaborative robotics so far? And, in your opinion, where does the journey lead?

The market data regarding cobots is not well defined yet. There’s a bunch of analyses that come to highly different market sizes. But what I definitely can see and evaluate is how we as Universal Robots are positioned: We are in a niche that we have built and defined for ourselves. And I see the huge potential within this niche.

Our cobots work as enablers for production employees. At the moment, a robot arm might be integrated into a certain application at a customer company. But taking a look back, three months before at the same company, the same robot might have run in a completely different application. Also, the company was able to customize the application without external support and they were able to do so very quickly. The customers have understood that our robot arms are not static products but dynamic tools. If your processes change, the robots just adapt to your new production layout. That’s why I don’t see any limits within our market.

Regarding the role of Universal Robots within this market: Where do you see the biggest challenges for the future?

We’re a first mover. And as first movers cannot refer to existing networks, they always face the challenge of building a comprehensive network to cover their entire market. One of our main challenges is extending our distribution network and our marketing for this purpose.

The customers are buying our products for very different reasons: Improving efficiency and a quick ROI is almost always important for them – but, for example, relieving employees from strenuous and harmful tasks plays a very important role, too. Also, maintaining productivity by the use of robot arms in phases of overload looms large.

The challenge for us is to show the end customers specifically, how they can individually benefit from collaborative robots. That they can automate almost anything.

As President, you must perform a lot of different roles. Which role do you see as your most important one to successfully shape Universal Robots' future?

Universal Robots´ pioneering role stems from its technology. Our technology is our driver – we are an enterprise of innovation. Our growth correlates with our structures and framework conditions. My main mission is to strengthen and enlarge these structures. Our opportunities are endless, we just have to seize. 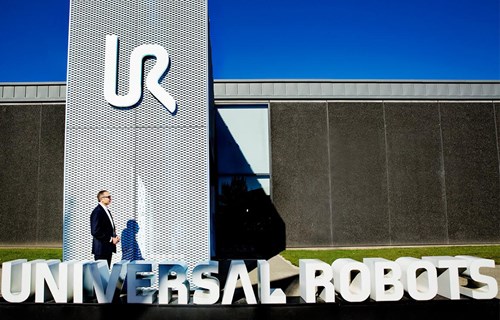 From Technology Pioneer to Customer Advocate: A discussion with UR President Jürgen von Hollen

With nearly 50,000 cobots sold worldwide, Universal Robots is a very different company today than the innovative upstart that pioneered a new approach to automation 15 years ago.