From Cobot Pioneer to the “Nobel Prize” of Robotics: What Drives UR CTO Esben Østergaard? 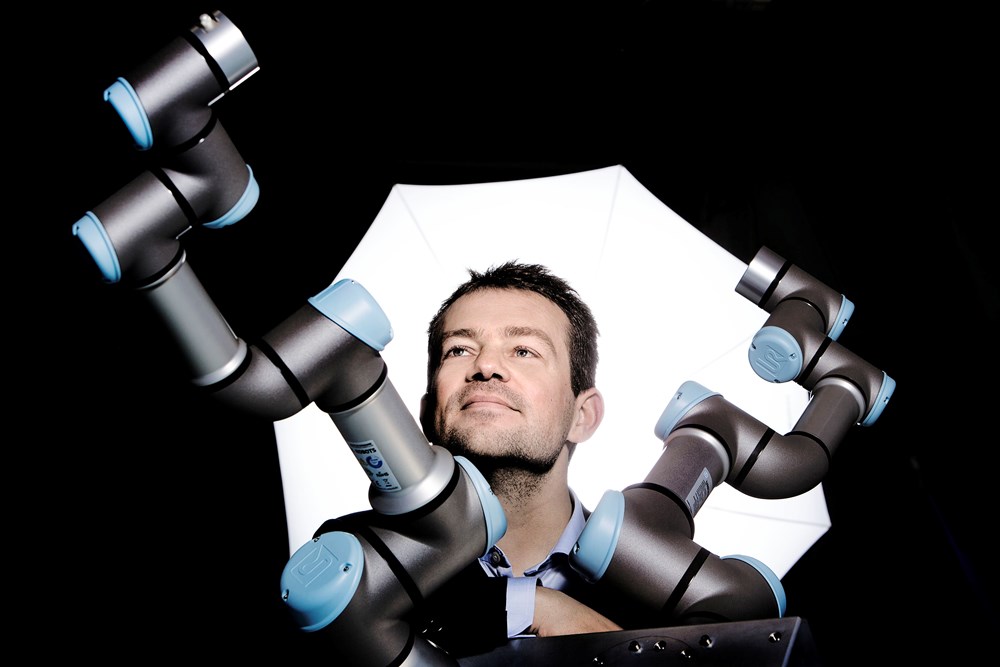 Receiving the Engelberger Robotics Award, the automation industry’s most prestigious honor is yet another recognition of the influence of Universal Robots CTO and co-founder, Esben Østergaard. But perhaps it’s not surprising. After all, he invented his first robot to solve a real-life industrial challenge at the ripe age of four.

Robot pioneer from a young age

Esben was living in the Philippines at the time, where his father, an engineer, was building the water supply for Cebu City. In order to pull cables through pipes, workers tried tying a string to a cat’s tail and chasing it into the pipe. Cats are not the most cooperative (or gentle) domestic animal, so the plan wasn’t ideal. Østergaard built a small robot to perform the task instead and the die was cast.

Esben went on to receive degrees in computer science, physics, and multimedia at Aarhus University in Denmark, and a PhD in robotics from the University of Southern Denmark. He has also held research positions at the University of Southern California (USC) Robotics Labs and at the National Institute of Advanced Industrial Science and Technology (AIST) in Tsukuba and Tokyo, Japan, experiences that fed his global view of automation.

The realization that the world needed a flexible, easy-to-program robot came to Esben in 2003 while at the University of Southern Denmark. He was working on a research project on how to automate processes in the food industry. Even the simple task of putting pepperoni on a pizza, however, required automation solutions that had to be moved by truck, were difficult to program and were much too expensive to be viable.
He co-founded Universal Robots in October 2005 with the intention of making robot technology available to all sizes of businesses and skillsets. He tested the first prototype arm in 2007 and the first robot arm was installed in December 2008, which became the world’s first commercially viable robot able to operate safely outside enclosures.

A radical break from traditional automation

The 2008 launch came at great financial risks in a market unaccustomed to human-robot collaboration. Yet Esben and his team prevailed by offering the industry a robot that was not only safe to work with but also lightweight, easy to use, and flexible.
It was a radical and courageous break with fixed automation. And it succeeded in driving cobot adoption in small and mid-sized companies for whom robotics until then had been too costly and complex.

Safety is just the cost of entry for cobots

Esben developed the UR robot’s force and safety control features, which ensure that if the robot collides with a person it automatically stops operating so it doesn’t cause bodily harm. These features have eliminated the need for safety guarding in the vast majority of installed UR robot applications and established the company as a trailblazer for the collaborative robot concept.

Safety, however, is just the cost of entry in the cobot market, according to Esben. He continues to propel UR’s frontrunner position by constantly raising the bar for what the term “collaborative” really entails. In his view, the label not only means humans can collaborate directly with robots but also addresses ease of use and implementation. Fundamentally, a robot is not truly collaborative if it’s not affordable and easy to work with.
Esben leads a team of developers that became the first to launch user-friendly yet sophisticated 3D robot programming via an intuitive tablet interface. This has enabled users with no previous programming experience to quickly set up and operate the UR robots.
This approach puts control of factory automation back into the hands of operators. By empowering a less-skilled labor force, Esben has become an advocate for bringing knowledge back onto the factory floor. Doing this will perhaps be the best long-term result derived from leveraging collaborative robots. 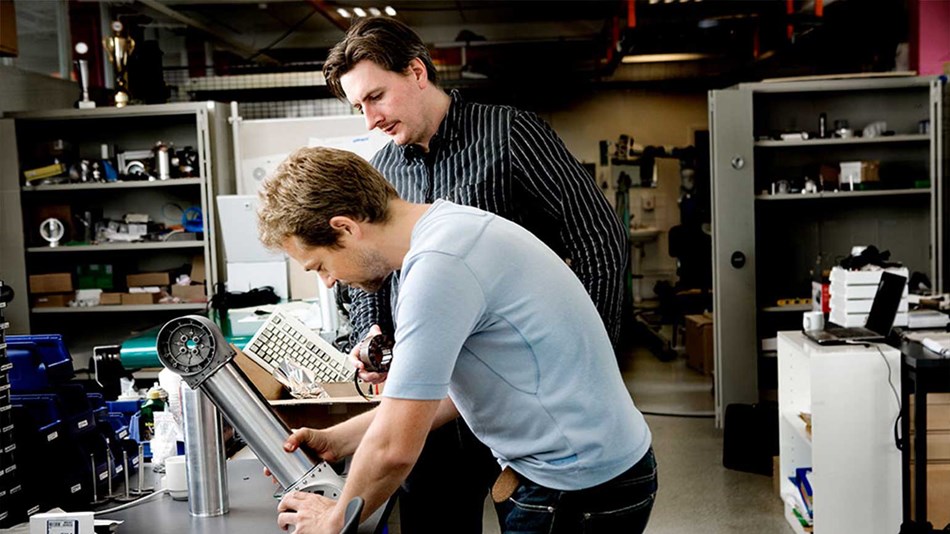 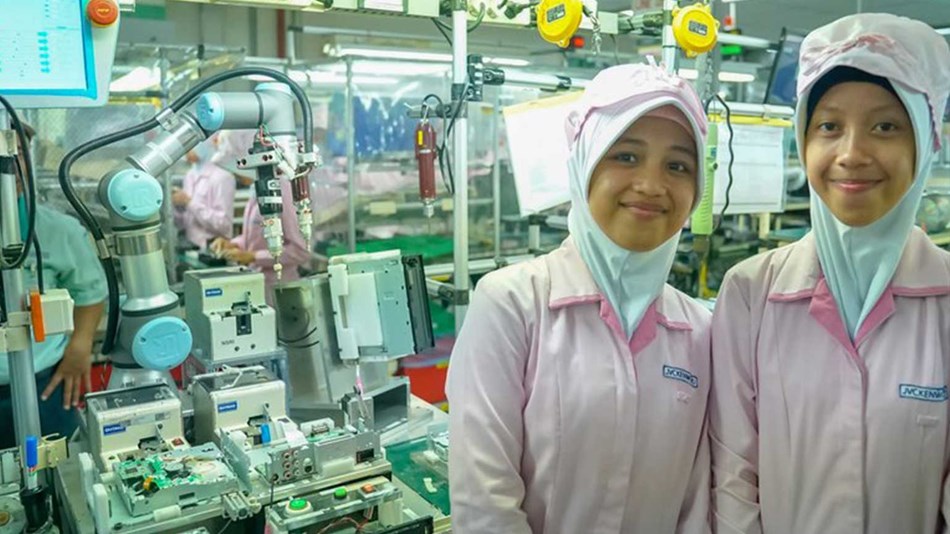 At JVC Kenwood in Indonesia, a global leader in electronic and entertainment products, seven UR3 cobots perform screw driving, soldering and, pick and place tasks, working alongside employees on the line. 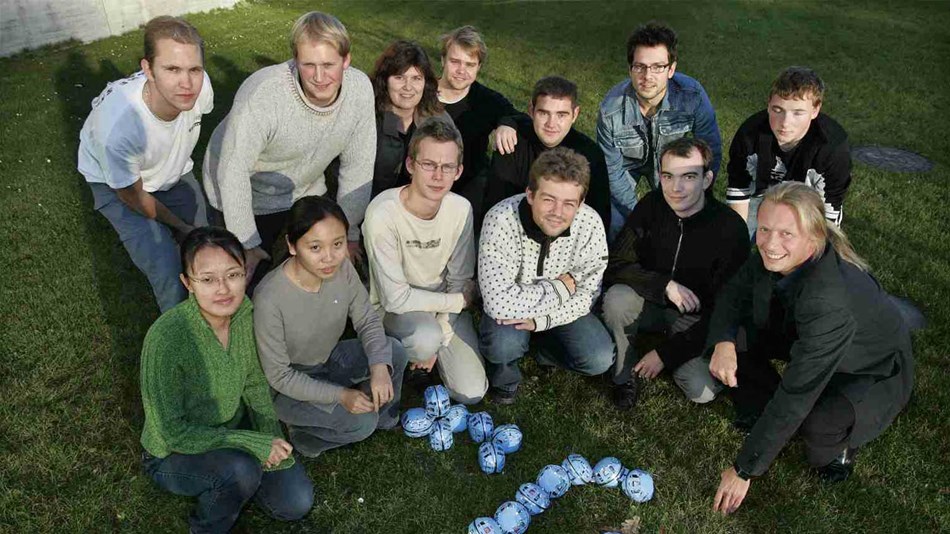 Maersk Institute at University of Southern Denmark, Odense, 2004: Esben’s PhD project work was on the ATRON system, a self-reconfigurable modular robot. His research was on building and controlling shape-changing robots (self-reconfigurable robots) related to Artificial Intelligence and to biologically inspired robotics.

Advances that triggered industrial revolutions created enormous wealth, but at the same time, removed passion and knowledge about products from those who produce them. Esben has become a sought-after speaker and thought leader on how we enter the 5th industrial revolution. In his view, this is a scenario where people and machines collaborate on the factory floor; where it is no longer man-VERSUS-machine but man-WITH-machine. This brings an enormous potential for adding value, rather than just cranking up production levels.
Esben believes that this redeployment of human creativity along with the robot’s repeatability addresses market evolution and customer demand for a high degree of individualization in the products they buy. It’s qualitative change both in the products made and the people making them.

Ongoing passion for robotics and possibilities

That 4-year old with a crude rope-pulling robot has come a long way, but Esben’s passion for robotics continues to be a driving force. When Teradyne acquired Universal Robots in 2015, Esben could have retired comfortably. Instead, he stayed on to lead UR’s R&D team that has more than doubled in size since the acquisition. He continues to be the lead developer of new products and features. Along the way, he has received a string of awards for his work and holds more than 30 patents.

These accomplishments have placed Universal Robots as the unrivaled cobot market leader with a current 58% share of all collaborative robots sold worldwide and with 50% to 100% growth each year.
We’re excited to follow Esben’s path and continue to innovate to benefit companies, employees, and consumers.

Think you’re too small for robotics? Download our ebook that will guide you through the most important considerations for robotics in small to mid-size operations: ->