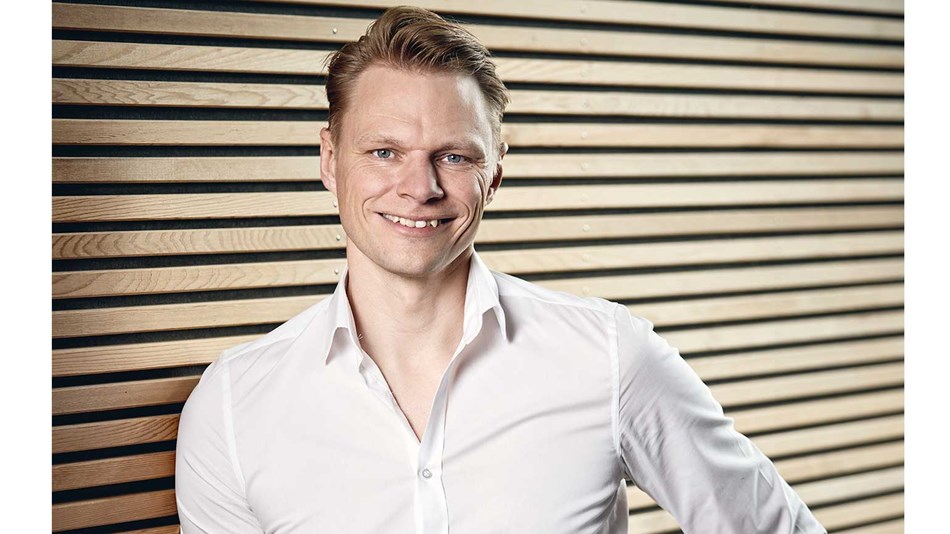 When Kim Povlsen took up the position of President at Universal Robots a year ago, it was with high ambitions from day one. Within his first year in post, the company has grown from around 600 employees to over 800 while recording a record annual revenue despite the pandemic. We met with Kim for a chat about his first year.

Charismatic President Kim Povlsen has made several changes since he took up the role at Universal Robots in March 2021. In addition to replacing the coffee, which in his own words was "not great at all", Kim’s first mission has been to create better structure in a fast-growing company that was characterized by a pioneering spirit after many years as a startup. “That pioneering spirit is still intact, but as a rapidly growing global company, we needed to introduce a bit more method and procedure” he adds.

“It has been important for me to get the strategy in place from the start, and it is never without challenges. Before I came, there were no strategists employed at Universal Robots as such. Therefore, one of the first things I did was to present a strategy and talk about what steps we should take –  without taking ten too many, " he states. Kim’s goal for the first year has been to empower individual employees and remove friction in the customer journey to automation.

A world where people work with robots and not like robots

“When I started at Universal Robots, we redefined the company's vision and mission to make it even clearer what we want to achieve with our cobots. In that process, we came up with the mantra of creating a world where people work with robots and not like robots. It is a vision that is consistent for our work and a mindset we bring into everything we do, ” says Kim.

The top manager also explains how important it has been for him to get rid of everything that looked like bureaucracy and heavy decision-making processes. It was necessary to create a new framework, where the distance to customers became shorter and the common vision clearer.

“All change is difficult, and there will always be some who enjoy the new direction and others who have a harder time coping. Overall, though, I would say that UR has welcomed me and the changes I have suggested and implemented have been well received. My experience from previous top positions is that you should not wait too long, because then you get used to how things work and you will not be able to see things as clearly, ” says the President.

I have no desire to control everything

When you ask Kim Povlsen what special qualities he has been able to bring to a company that has already seen many years of growth, the answer is clear.

"There are lots of things I'm not good at, but what I know I can do really well is to set a direction. I have no desire to control every process within our company, and I think that has clear advantages. I try to empower my employees by giving them back self-determination. For example, management should not tell engineers how to solve a problem for a customer, the engineers know best themselves. We just have to send them in the direction of the right problems, ” says Kim.

In his first year, the President has put a lot of energy into creating a framework that allows the various development teams to take the necessary steps to create less friction in the transition to automation. This means, among other things, creating greater awareness in the market. As Kim describes it:

“We need to tell the story of why our product works well for those who already use cobots, and we need to make it easy for new customers to take the plunge. It is so incredibly important to focus on the right things because we have more than 250 people in our development teams who have to work together to create the best solutions. They should not be involved in projects where they do not really have an eye for what problems they are trying to solve, and where the only focus is on the next deadline, ” says Kim.

Kim Povlsen knows exactly what his most important task at Universal Robots is - to create a workplace that is joyful for every employee to be at. He emphasizes, among other things, that everyone should have a piece of the pie when good results are created.

“We introduced a bonus across the company so that everyone is rewarded for their good efforts. It applies whether you are VP or in production. That reflects our values ​​and my dream is for Universal Robots to become a company where engineers, marketeers, salespeople and all the other professions that make up our company think "this is something I want to be a part of because it’s out of this world". We are already well on the way to that.” Kim Povlsen says.

He also emphasizes that he primarily hires new talent with company values in mind.

"Skills can be taught, and of course, we do not hire someone who does not know their profession, but the values ​​must fit, that is the most important thing," he states.

Kim Povlsen has followed the journey of Universal Robots from the sidelines since he was a student and has known both family and friends associated with the company.

"They told me about how exciting - and sometimes a bit chaotic - the workplace has been, and I have often thought this is something I would love to help with", says Kim, who graduated as a robot engineer from SDU in Odense the same year that Universal Robots launched its first cobot.

It was a case of lucky timing that brought Kim to Universal Robots. Shortly before he was hired, he had been offered another job.

"It sounds like a story you couldn’t make up, but I was actually sitting with the contract in front of me and was about to sign for a new job when they called me from Universal Robots. Somehow it was a dream come true, and at the same time I got the opportunity to come back to robotics and to Odense, where I grew up,” he explains.

Fantastic growth within the first year

Kim is confident that his first year's efforts have pulled the company in the right direction and, in the coming year, he wants to focus more on commercial interests and marketing. Our focus should be on how we help the customer tackle their challenges and less about us saying "look here is a cool robot," says the President with a twinkle in his eye.

If you look at the recently published annual accounts, it testifies to a good start for Kim Povlsen. Universal Robots had a USD 311m revenue in 2021. That was an increase of 41% compared to the year before – and 23% more than in 2019 before the pandemic struck.