A traffic stopper at last year’s FABTECH was SnapWeld, the first integrated MIG welding system for collaborative robots. SnapWeld was developed by Universal Robot UR+ partner and Certified Systems Integrator ARC Specialties in Houston, Texas, and will be showcased this year in a live demo at Universal Robots’ FABTECH booth C-12116 in an upgraded version compatible with UR’s just-launched e-Series line of cobots. A new offering this year from ARC Specialties is SnapCut exhibited at FABTECH in a pilot version coming soon to UR+, the platform for plug and play products certified for UR cobots.

SnapCut allows traditional metal fabricators to easily cut shapes in 3-dimensional steel components with no prior robotic or computer programming knowledge. SnapCut utilizes the UR10e collaborative robot from Universal Robots to manipulate a Hypertherm cutting torch to desired positions around the cutting path.  Included in the SnapCut software integrated directly on the UR robots’ teach pendant, are standard shapes like squares, rectangles, circles, or C-channels that can be selected for parametric programming.  The operator will simply move the cutting torch to a few locations on the cutting surface, hit run and watch the sparks fly.

“With SnapCut, we have developed a tool that allows metal fabricators to deploy UR cobots to cut non-standard positions on-location with near plasma table quality,” says John Martin, Vice President with ARC Specialties. “We’re providing an easy automation alternative to a process that today is primarily done manually.” 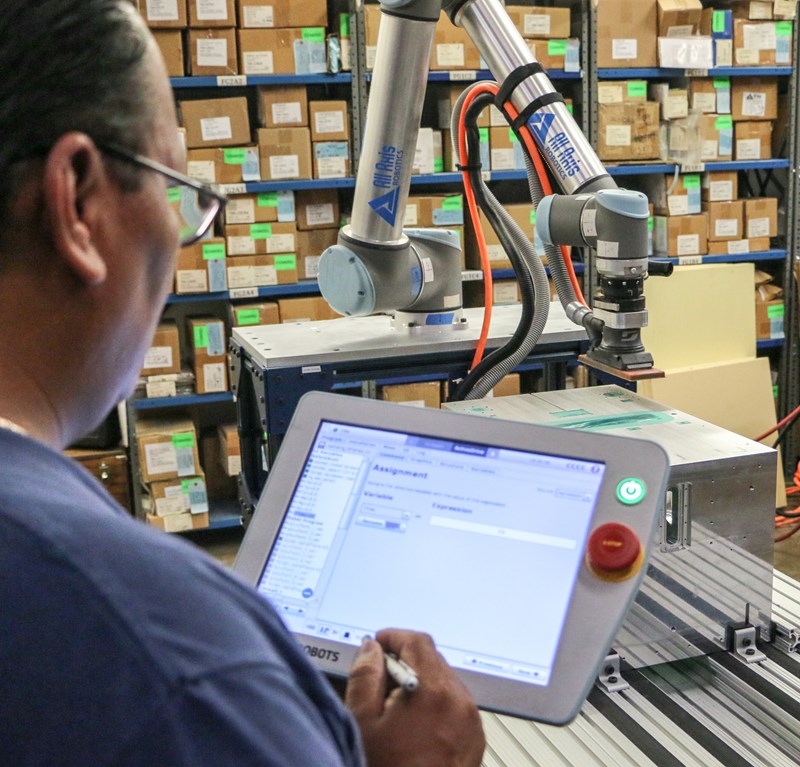 Dynabrade orbital sanders are now fully integrated with UR cobots through the UR+ platform.

Another manual task now addressed by cobots is sanding. FABTECH is the official launch pad for Dynabrade’s new robotic sander kit that just received UR+ certification. The kit includes pneumatic sanders, robot mount, and a solenoid enabling robotic operation via the UR teach pendant. "We are finding that many of our customers are interested in mounting our tools on robots,” says Frank Lehman, Dynabrade’s Head of Engineering, emphasizing the benefit of providing Dynabrade users with a turn-key solution enabling them to mount the sanders on collaborative robots. “Cobots are very affordable and user-friendly, allowing our end users to bring automation into their workplace without the expense and learning curve of traditional robots. With UR being the leader in the cobot industry, it was obvious to bring our sanders to the UR+ platform."

For new deburring capabilities with cobots, manufacturers can now turn to ATI Industrial Automation’s new Compliant Deburring Blade  (CDB) one of the most versatile tools for material removal. Intended to replace traditional hand deburring tools, the CDB excels in light and medium deburring, chamfering, and scraping operations on materials such as plastic, aluminum, steel, and brass. Axial and radial compliance reduce robotic programming time by maintaining constant force where surface irregularities are present. CDB will be showcased in UR’s FABTECH booth and is in the UR+ pipeline. 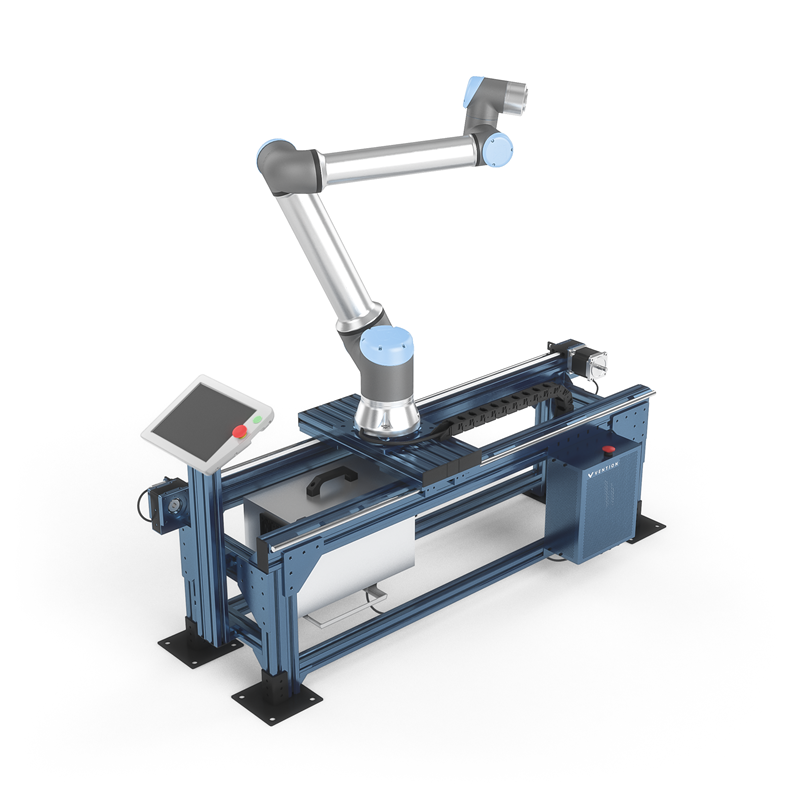 The FABTECH show displays not only how capabilities of UR cobots widen with UR+ enabled tools, the physical reach of the robot arms are now improved through Vention's new 7th axis range extender designed for all three UR models, soon to be featured in the UR+ showroom too. “We’re proud to contribute to the UR+ ecosystem with rapid design and commissioning of robot cells,” says Patrick Halde, Vice President of Sales and Business Development with Vention. “Our new 7th axis solution can be controlled with Vention’s MachineMotion controller directly through the UR cobot’s touch screen allowing users to assemble and self-commission in hours.”

Universal Robots’ Regional Sales Director for Americas, Stuart Shepherd, looks forward to showing the FABTECH audience the capabilities and applications now enabled with the new UR+ solutions. “It’s exciting to see our partner network embracing our new e-Series cobots, incorporating them into cutting edge applications so quickly,” he says. “We’re confident the metal fabricating industry will deploy a significant number of e-Series cobots with certified UR+ products in the year to come.”

Universal Robots will also be on display in the following FABTECH booths:

ATI Industrial Automation – Booth C11522
UR 5 showcased with ATI’s UR+ enabled MC-10 tool changer and Axia80 f/t sensor. Unlike load cells, which only operate on a single axis and measure only push, the Axia80 senses torque and side loads along all six axes.

Crum Manufacturing – Booth C10161
Crum Manufacturing will exhibit a UR3 with a Gocator 2330 from LMI Technologies demonstrating the ability to line track, profile scan and measure parts. The use of a laser profile scanner allows the robot to easily determine pick locations on randomized part positions. This also allows for easier part quality control, as the Gocator is able to measure the parts that the robot will be picking.

COB Industries/HFT – Booth C10871
COB Industries will display a UR3 in Huntingdon Fusion Techniques’ inert welding environment, that have grown very popular with the additive manufacturing industry who utilize the HFT inert environments in conjunction with robots to apply 3D printing techniques with specialty materials such as titanium and tantalum.

Innerspec – Booth C10523
UR3 integrated with TG-IL, Innerspec’s latest generation of EMAT thickness measurement. The UR3 scans a non-contact EMAT UT transducer along the length of an aluminum tube, measuring wall thickness variations to +/-0.0001”. TG-IL is housed in an IP54 industrial enclosure and is ready to be integrated into any industrial environment where automated thickness measurement is required.