Odense, Denmark/Munich, Germany, June 21, 2016:Universal Robots, the Danish pioneer of human-robot collaboration, revolutionizes the automation industry with the launch of Universal Robots+ at AUTOMATICA in Munich. Today, the company presents:

At the AUTOMATICA kick-off in Munich, Universal Robots+ will – for the first time – be presented in hall B5 (518) as well as to all interested developers at a designated +YOU booth (341).

With Universal Robots+, the company creates its own eco-system enabling applications revolving around the collaborative robot arms UR3, UR5 and UR10 to be developed and showcased. The so-called URCaps, accessory components that extend the UR robots’ capabilities, can be customized hardware components, software plug-ins, or a combination of both. The aim of Universal Robots+ is to reduce implementation periods, increase user comfort and reduce costs for all parties involved.

How developers and distributors will benefit

“When developers have received our approval for designing within Universal Robots+, we will support them via our local subsidiaries by providing robots for testing and optimizing URCaps. On request, robots can also be purchased at a reduced price, given that they will be used exclusively for the development and testing of new UR-related components,” says Stefan Tøndering Stubgaard, Manager of Universal Robots’ Corporate Technical Support.

After completion of a URCaps prototype, the developer will send it to Universal Robots for examination. Tøndering Stubgaard explains: “Before a new product can be presented in our showroom, we verify its quality. In comprehensive functionality tests, we test whether the URCap can be implemented and operated easily and if the product conforms to Universal Robots’ quality requirements.”

In addition, developers can also get their URCaps certified by Universal Robots. In order to receive this additional quality certificate, developers must document that their solution is already operating in a real application and used successfully by a customer.

Having capabilities featured in the Universal Robots+ showroom is free of charge for developers. In providing this, Universal Robots offers all developers a professional marketing platform granting them access to an ever expanding, global customer network. Sales of all products and capabilities revolving around the UR-robots’ universe will continue to be provided through Universal Robots’ established network of distribution partners. In this way, distributors also benefit from this central platform, where they can both offer and access applications developed specifically for the use with UR robots. Universal Robots+ is the toolbox that tailors the optimal solutions for their individual customer needs.

After verification of the URCaps by Universal Robots, the developers will receive access to the +YOU online forum, where they can exchange questions and ideas. In addition, all members of the community will receive access to the company-internal developer support, which will assist (if necessary) in developing a market mature application. Additionally, the URCaps Software Development Kit can be downloaded free-of-charge.

The first approved capabilities developed by the developer community will accompany the Universal Robots+ launch at AUTOMATICA. One new URCap is the vision-guided Pick & Place solution of Robotiq, the Canadian manufacturer of flexible robot grippers and sensors. Samuel Bouchard, CEO of Robotiq, explains: “The UR robot arms can be equipped with our new camera and vision system and deployed right into assembly within five minutes. There is no need for an external computer to set up, program, or operate the camera. Everything can be done within the robot’s user interface. In developing this solution, we managed to meet the need of Universal Robots and our customers demanding an easier and faster implementation of a camera and vision system that can be deployed by anyone.”

Alongside the launch of Universal Robots+, a new update for the robot arms’ operating software has been published. The new release (Software Version 3.3) includes updates such as the Profinet IO device functionality. The new compatibility with Profinet protocols opens up numerous additional areas of deployment and activities for robots. “A key feature of the update supporting the Universal Robots+ platform is the ability for providers to now offer solutions that interface seamlessly with the UR software,” says Østergaard.

Until now, the software enabling communication between developer applications and the UR robot arms had to be implemented by using relatively complex script code, which is time consuming and a difficult task for the majority of end users to handle. As the Software Version 3.3 now consists in parts of open source software, the developers can implement their software as an add-on, reducing the time needed for implementation at the end customer’s premises significantly, thus reducing both price and potential risks. 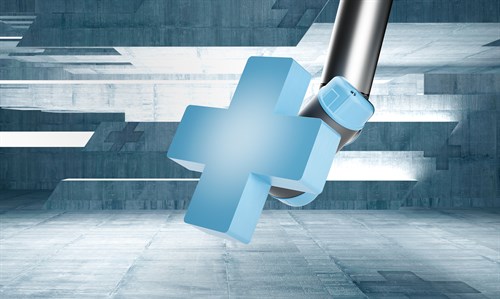 Universal Robots is the result of many years of intensive research at Denmark's successful robot cluster, which is located in Odense, Denmark. The company was co-founded in 2005 by the company’s CTO, Esben Østergaard, who wanted to make robot technology accessible to all by developing small, user-friendly, reasonably priced, flexible industrial robots that are safe to work  with and  on their own can be used to  streamline processes in the industry. The product portfolio includes the collaborative UR3, UR5 and UR10 robotic arms named after their payload in kilos. Since the first UR robot launched in December 2008, the company has experienced considerable growth with the user-friendly robots now sold in more than 50 countries worldwide. At just 195 days, the average payback period for UR robots is the fastest in the industry. The company, a part of Boston-based Teradyne Inc., is headquartered in Odense and has subsidiaries and regional offices in the U.S., Spain, Germany, Singapore, Czech Republic, India, and China. Universal Robots has more than 270 employees worldwide. Learn more at: www.universal-robots.com, www.universal-robots.com/plus/ and on the company-owned blog.