Atria Scandinavia is one of northern Europe’s leading manufacturers of vegetarian and gourmet products for convenience markets and retail chains in need of round the clock service.
At one of atria's four factories in skene in western Sweden, many of the plant’s 30 employees are working side by side with three robot arms from Universal Robots. Atria considered several solutions before they chose universal robots.

Each day, shrimps, olives, artichoke hearts, sun-dried tomatoes, garlic and other specialties are marked with labels, packed and palletized at Atria Scandinavia. This process has now been optimized with collaborative robot arms enabling each production line to prepare on average 228 items per hour for delivery. The payback period on the robots is just one year.

"Our goal is to get reliable product lines where we can produce efficiently and effectively while keeping our staffing costs down. As a food producer, it is extremely important for us to minimize downtime, so we can supply fresh goods at a competitive price. The UR robots are a great automation solution, because they can run without safety fencing. It is a significant advantage that our employees can work right next to the robots and that they easily can adjust the robots when packing different types of products," explains Johnny Jansson, Atria’s Technical Manager responsible for the integration of “cobots”.

For the factory workers, it has been a real eye-opener that robots can be so simple to use. Atria purchased their UR-robots from the local UR distributor Edstrøm’s that offered introduction and training in the using the robots. But even before the training started, Atria's technical department had begun to use the robots and managed to build the first installation of two UR5 robots and one UR10 robot.

"We were all completely new to UR robots and I was impressed that it was so easy to get started. They’re very different than other robot brands as they are very logical and intuitive to work with," says Jansson.

The Danish developed cobots have become a natural tool in the production at Atria. The easy programming and operation saves the company a lot of time when changing from i.e. packaging shrimp to packaging olives.

"Before, it took six hours to convert to a different product, but with UR robots change-overs happen in just 20 minutes."

Johnny Jansson was originally trained as an electrician, in Atria’s workshop he and his colleagues designed and built the robot applications for a new, automated packaging process. In the workshop they solved small challenges along the way:

"It simplifies the deployment of robots that we can build solutions for our production in-house. We can go back and forth between the workshop and the production line refining applications as we build them. For example, we developed a small wheel to fold the edges of the cardboard boxes that the food products are packaged in. This solution probably wouldn’t have been conceived if we had been sitting in front of a computer planning the robot application," says Jansson.

Thanks to the collaborative robots, Atria has also optimized material usage in the packaging department, reducing carton waste by 25 percent since the first three cobots were implemented.

Traditional automation technology is both bulky and expensive. That’s why the management at Atria now has decided to scrap a traditional, shielded industrial robot and a bulky packaging machine that occupied half the space on the packaging floor. Instead, Atria will automate all of their packaging lines in their production with flexible UR robots working unshielded side by side with employees.

The installation of the first two robots from Universal Robots took two months, their next robot installation will happen faster:
"Now that we’re familiar with the UR robots we know how to easily integrate them. It should not take more than two weeks to get the next ones up and running," says Atria’s Technical Manager.

Start a proof-of-concept
“Before, it took six hours to convert to a different product, but with UR robots change-overs happen in just 20 minutes.”
Johnny Jansson Technical Manager 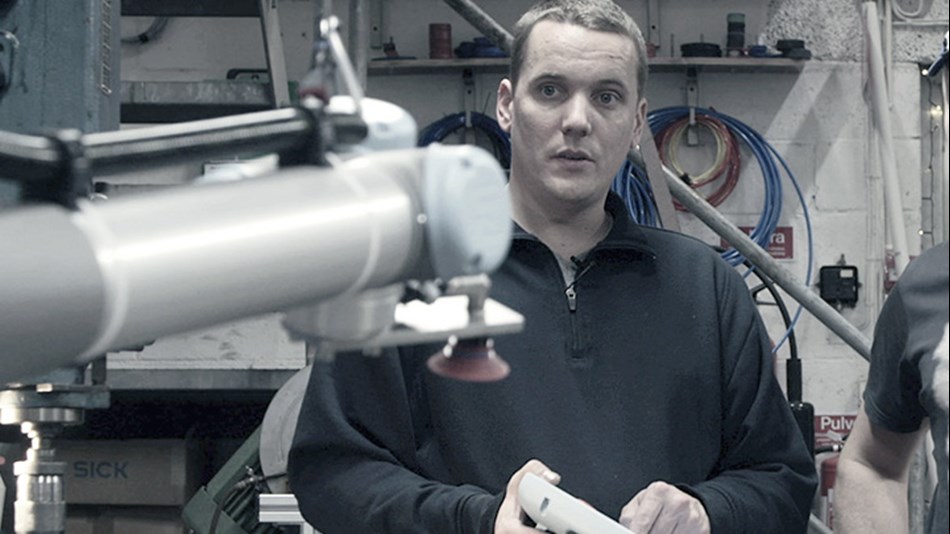