Universal Robots' UR5 chosen for the Broca Project, the first surgical robot made in Spain

Three UR5 robot arms form an integral part of the project developed by Tecnalia and a team of engineers from Malaga University, which was presented this month at IMIBIC in Cordoba.

Last Thursday the 26th March, Universal Robots participated in the official presentation of the Broca Project’s first prototype, a surgical robot developed in Spain by Tecnalia and the University of Malaga whose aim is to make robotics accessible to all hospitals, and allow surgeons to work with a secure and precise device that enables them to carry out operations that usually require laparoscopy surgery. 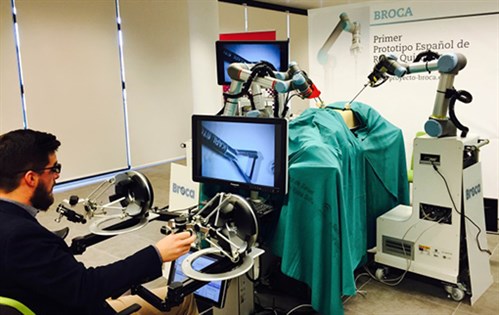 The Broca robot is made up of three UR5 six axis robotic arms, which can function in a coordinated manner or individually, according to the requirements of the operation. Universal Robot’s robotic arms were chosen for this project for their simple programming system which has allowed the engineers to adapt their software to the specific needs of surgical operations. Each UR5 arm weighs just 18 kilos, making it possible to easily install them on a vertical support which has been adapted to avoid the need for cabling and thereby allowing free and unhindered movement of medical personnel around the operating theatre. The Broca robot also incorporates a screen for 3D vision that enables the surgeon to operate whilst seated and broaden his or her field of view for better control of the operation via a pair of control joysticks that emulate the laparoscopy instruments.

The aim of incorporating robotics into surgery is to develop simpler solutions with an improved cost effectiveness ratio for healthcare systems. Within this context, the Broca Project has been conceived in order that conventional perishable materials for laparoscopy surgery available on the market can be used. This offers an advantage over existing solutions and considerably reduces installation and maintenance costs.

This pioneering project in Spain has been financed by the European Regional Development Fund (ERDF) and the Spanish Ministry for Economy and Competiveness. 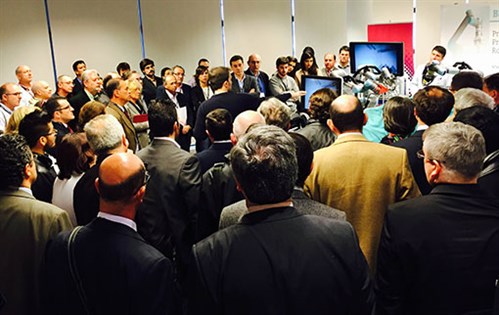